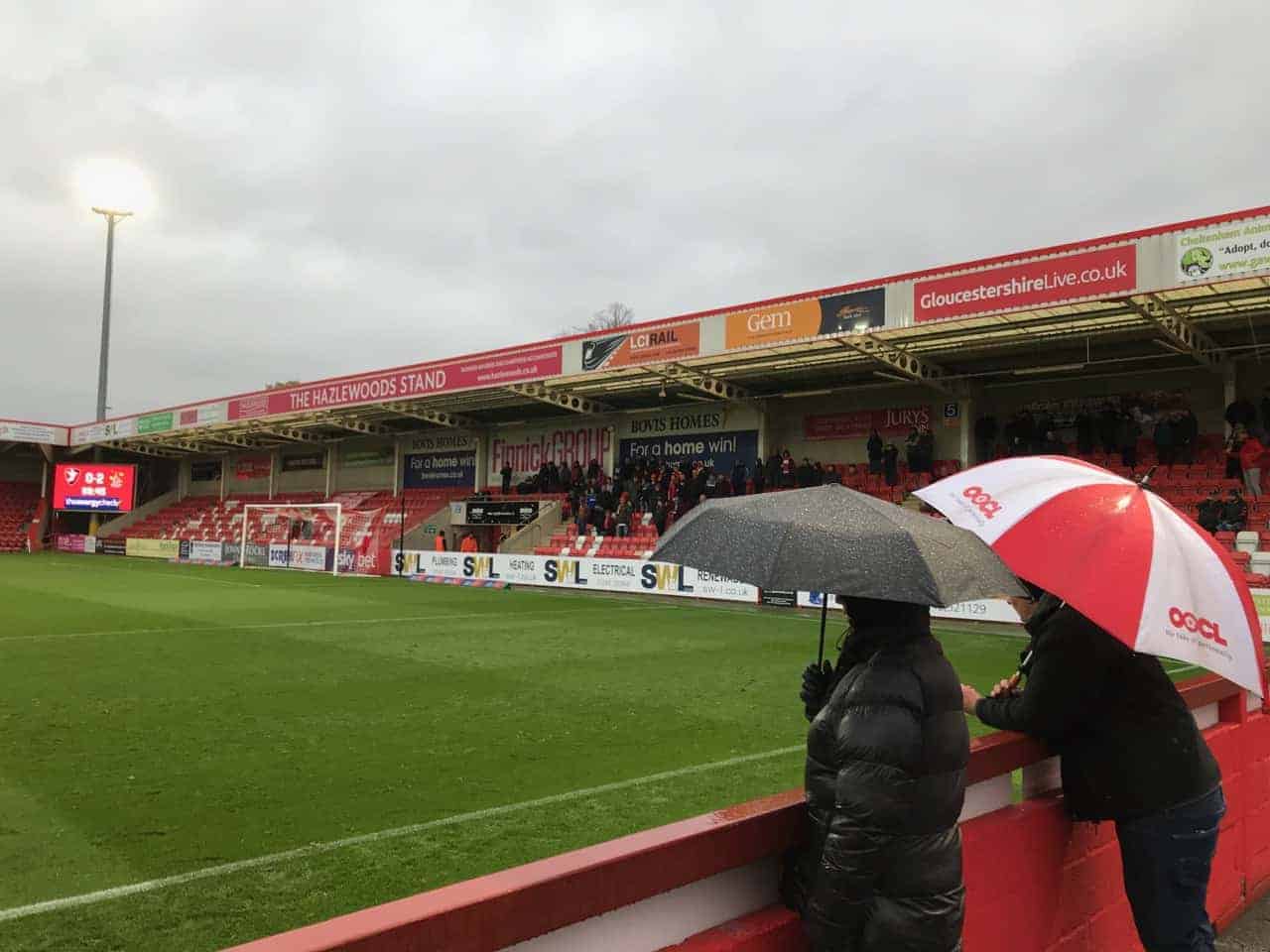 Cheltenham Town will host Manchester City at Whaddon Road in the FA Cup 4th Round.

As this season’s 4th Round FA Cup dates approach, we at Groundhopper Guides look forward to a weekend of, we hope, the “magic of the Cup.” Or at least some entertaining games!

To help you understand and enjoy a bit more of what you’re seeing this weekend, here are a few notes about the FA Cup fixtures. You can watch all 16 of these games if you live in the US and subscribe to ESPN+ (for just $4.99 a month). 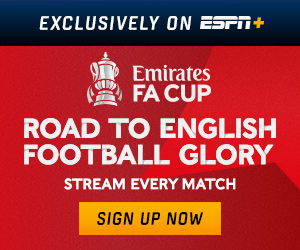 Every FA Cup fixture from here on out is on ESPN+ in the US.

We’re not going to get into the “who will win” kind of preview, but more like the “who are these clubs, and what’s it like to go there?” content that we specialize in here at Groundhopper Soccer Guides.

For starters, as a reminder, the FA Cup structure has no brackets and no seedings. Home and away are determined by random draw, and with more than 700 clubs eligible, you can wind up with some really interesting and unique matchups. For example, in the Third Round, Tottenham Hotspur of the Premier League had to go and play at Marine FC from the eighth tier of English football.

Here’s a guide to the leagues and cups of English football. 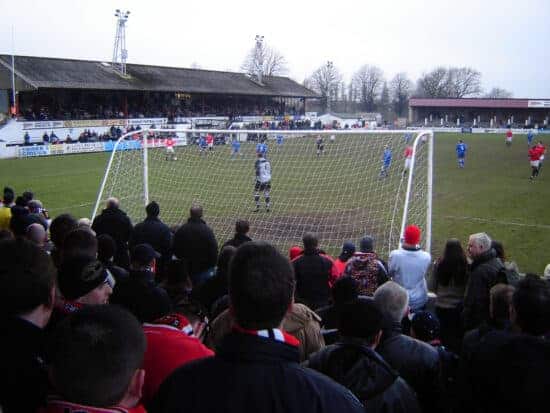 Chorley FC, from a Lancashire town of about 35,000, are the last non-league club left in the 2020-21 FA Cup. They play in the sixth-tier National League North, and have never been above the 5th tier in their entire history, which goes back to 1883. Should they win, they will not only collect some more life-saving money, they will also be just the ninth non-league team since World War II to make it into the Fifth Round, where they would almost certainly host Arsenal.

If they beat Wolves, that would be referred to as a giant-killing, and here’s a list of 10 famous FA Cup Giant-Killings of the past.

We are so excited about this particular FA Cup 4th Round fixture that we wrote an entire blog post answering the question, Who is Chorley FC? There you can read about the last time Chorley played Wolves in the FA Cup, which Wolves fans will not care to remember.

Whaddon Road (see image at the top of this post) will see Cheltenham Town of fourth-tier League Two, another FA Cup “minnow,” host Manchester City of the Premier League. Cheltenham is a “spa town,” simply meaning it was built up around hot springs in the 17th century and, for a while, was a really big deal. Now it’s just a lovely, peaceful place more famous as a home to horse racing and as a gateway to the fabulous Cotswolds region west of London. 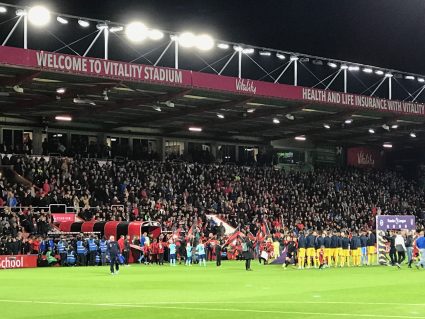 Bournemouth’s Vitality Stadium will, sadly, not be full for the FA Cup 4th Round, as it was here for a Premier League game in 2018.

When: Tuesday, January 26, 10 a.m. Eastern. Note this is a rescheduled from Saturday because of a coronavirus outbreak at Crawley Town.

Another League Two outfit, Crawley Town staged the shocker of the Third Round when they beat Premier League Leeds, 3-0. Their prize is a trip to the South Coast to play Bournemouth, who you’ll remember as a recent Premier League outfit. They were relegated to the Championship after last season, which in fact is a step back towards the majority of their history.

They almost went out of business in 2009, when they were bottom of League Two and needed a last-minute goal on the final day to stay in business. Several years later, they were Premier League. You can meet AFC Bournemouth here and read about the time when I scored one of the toughest Premier League tickets around and actually saw a game at Bournemouth.

I have not written about Crawley Town yet, other than in my book, but it’s basically a southern London suburb and a club that was part-time until 2004.

Stream soccer LIVE all season on ESPN+. Sign up now!

You may have heard of these two? It’s the biggest rivalry in English football, and yes, they just played last weekend. But that was in the league, and here’s another reason to love the FA Cup: In addition to teams that normally don’t play each other, you get bonus rivalry games like this one, and like the Liverpool-Everton Merseyside Derby I saw at Anfield in 2018. You may also, in this case, see some youngsters on the pitch, as each club might prioritize trying to win the Premier League over the FA Cup.

Let’s just hope one of them manages to score a goal this time, unlike that nonsense last weekend.

Brighton and Hove Albion vs Blackpool

Blackpool are a budding back-from-the-dead story, as toxic ownership alienated supporters and sank the club into mid-table League One status. They were just Premier League in 2011, and they were giants in the 1940s and 1950s. They won the FA Cup in 1953, one of the most famous Finals of them all. It was known as the Matthews Final, for Sir Stanley Matthews, about whom there’s a terrific documentary you should watch. Such was his stature and influence that they “named” the final for him even though a teammate had a hat-trick in the game!

Brighton also have an interesting history and a great stadium, and it’s a terrific place to visit, just an hour south of London on the coast and packed with history, scenery and a cool shop- and cafe-filled neighborhood called The Lanes. You know, for future reference when we can travel again.

This is two feel-good stories going at it, as Leicester — famous Premier League champs just a few years ago, and even more impressively now an upper-table fixture — visit Brentford, who have just built a new stadium and appear on the rise to the top tier, where they haven’t played since 1947.

Brentford’s old ground, Griffin Park, was an old-school gem, and the new one, Brentford Community Stadium, looks good as well. I’m anxious to see how it looks on television, and if they talk more about it during the broadcast. 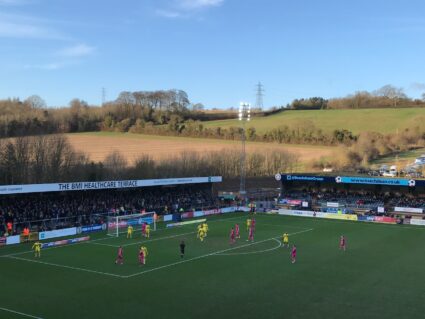 Wanderers are another team on the rise, as this is their first-ever season in the second tier of English football. They actually play in a place called High Wycombe (there is no Low Wycombe) and are a fun day out from London — when we can go to games again. I’m gutted for their fans that they can’t pack Adams Park for league games and this big FA Cup 4th Round fixture!

You can get to know Wanderers here. Pay special attention on the broadcast to the fact that one side of the ground appears to be out in the woods — because it is (see above). The other side, oddly, is an industrial park.

For Spurs, this will seem like a palace compared to eighth-tier Marine last round! 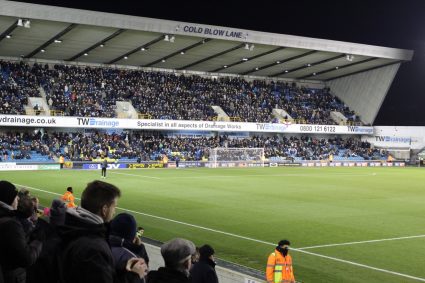 The Rest of the FA Cup 4th Round Fixtures

Let’s quickly get through the rest of the games and give you some more links for background.

Nothing would please me more than seeing Millwall become a big-time team, as the night I spent among their super rowdy (maybe too rowdy) fans is one of my most memorable groundhopping experiences. Bristol is probably more interesting as a city than a club.

Norwich are down in the Championship, trying to bounce back to the Premier League after one season, and Barnsley is, well, even people who live there seemed confused when I showed up to see the Tykes play! Here’s what my game at Oakwell was like.

The Blades are desperate for anything positive, as it’s almost confirmed they are going down at the end of this season. So do they prioritize staying up, or go for a Cup run? Win this, and they host Millwall or Bristol City.

I have a soft spot for both clubs here. I captured one of the more famous videos in recent Sheffield United history, which landed me in the local newspaper. And I once saw some 9,000 Plymouth fans in an FA Cup 3rd Round game at Anfield. They gutted out a 0-0 draw, earning themselves a replay at home and applause from Liverpool players and coaches (above).

And no, they don’t wear argyle; they are one of the few teams who wear green, though.

The cavernous London Stadium must be something when it’s empty, and this tie will, I suppose, resemble a training ground friendly. The Hammers are on a good run of form but probably won’t risk any top players against “Donny Rovers,” a League One outfit from Yorkshire who made the 5th Round of the FA Cup just two years ago.

Like Bournemouth, the Swans are a nearly-dead-but-revived story, currently in the Championship but in the Premier League just a couple seasons ago. Here’s what it’s like to see a game there, and to have a beautiful Spanish striker blow kisses your way. Forest were a massive club many years ago but haven’t been in the top tier for 21 seasons, and in that time have only twice made it farther than this in the FA Cup.

Again, expect a lot of reserves here, as both clubs struggle to stay in the Premier League. I’m curious mainly to see how the renovations of Craven Cottage are going.

This one would have been high on my list to attend, mainly to see about 8,000 Hatters packed into the away end at Stamford Bridge. Alas, Covid. Otherwise, you should know that their home ground, Kenilworth Road, is the most famous (and my favorite) shithole ground I’ve ever been to.

If nothing else, think of this as two massive traditional clubs, both with terrific old stadiums and both currently overshadowed by their local rivals. Goodison Park and Hillsborough are among the best historic football grounds in the country, and when we can go groundhopping again, I encourage you to prioritize visiting both.