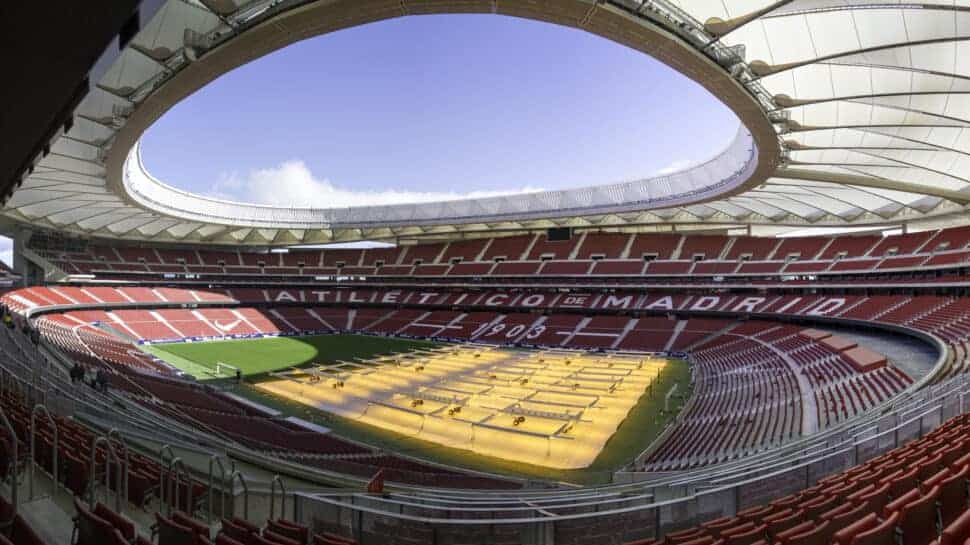 Though they are the defending Spanish champions, Atlético Madrid are very much the No. 3 team in Spain’s La Liga. Still, they are a big club with a rich history and remodeled stadium in an amazing city. So let’s take a look at Atlético Madrid.

The other two Spanish giants are, of course, Barcelona and Real Madrid.

Looking for Atlético Madrid tickets? Skip ahead to request a quote for any home game. 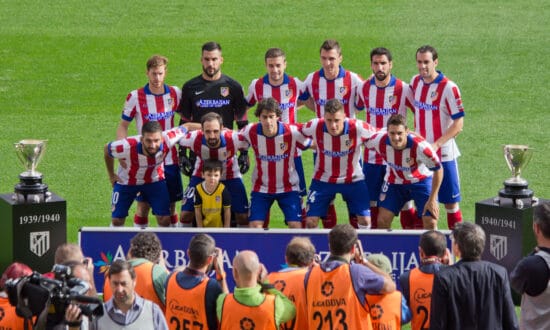 It seems many European football leagues have their “Big Six” or “Big Four” — teams that constantly find themselves at the top of the table.

Spain’s La Liga has a very clear “Big Three.” Since the 2012-13 season, Atlético Madrid, Barcelona and Real Madrid have comprised the top three in the final standings each season.

The home kits are one of the most recognizable uniform combos in the world, with their red and white vertical striped shirts, blue shorts, and blue and red socks. That combination has been used since 1911. 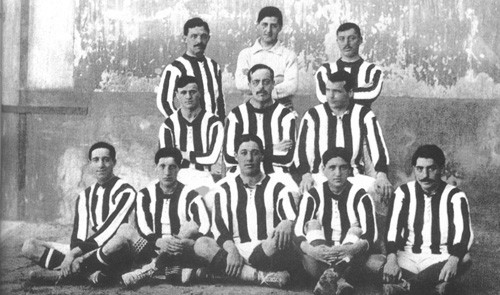 Donning the kits you see today for the first time in 1911. (Image: Unknown author, via Wikimedia Commons)

The club was formed in 1903 by students in Madrid who saw the new club as a youth branch to their childhood team, Athletic Bilbao. In 1911, the club started to break away from Bilbao, and formed its own identity with its now famous kit. But Bilbao still used ‘loaned’ players from Madrid to find success.

In 1921, Atlético Madrid became independent of parent-club Athletic Bilbao and moved into a 35,600-seat stadium. Success came early; they were Copa del Rey runners-up in 1921. In 1928, they were invited to join the Primera Division in the inaugural La Liga played the following year.

During World War II, the club merged with Aviacion Nacional which had been founded in 1939 by members of the Spanish Air Force, and became Athletic Aviacion de Madrid. The merger led to back-to-back La Liga titles in 1939-40 and 1940-41, the first in club history. In 1947, the club dropped the military association and settled on its current name of Club Atlético de Madrid.

After the changes, Atlético once again claimed back-to-back La Liga titles in 1949-50 and 1950-51 under famed manager Helenio Herrera (who won a total of four La Liga titles and three Italian Serie A titles).

Then the winning ways started to dwindle. The youth academy was closed in 1992, and Atlético avoided relegation with a draw on the final day of the 1994-95 season. It wasn’t until 1995-96 they raised the trophy again, 19 years since their last title.

Relegation did come following the 1999-2000 season with a 19th place finish, after playing 63 consecutive seasons in La Liga. After two seasons in the Segunda Division, Atlético were promoted for the 2002-03 campaign.

Much of that success is owed to their manager, Diego Simeone, an Argentine who played five seasons for the club in two stretches and has been manager since 2011 — an extremely rare stretch for a modern-day manager.

Atlético Madrid in the Champions League

They have also advanced to the group stage for the ninth straight season, and will be looking for the first team trophy in the Champions League in club history. Atlético Madrid has reached the final on three occasions, 1973-74, 2013-14 and 2015-16. Both of the most recent times they fell to fellow La Liga squad Real Madrid. Last year, Atlético Madrid fell to Chelsea in the first round of the knockout stage, 3-0.

Here at the matchups between Atlético Madrid and Liverpool:

Metropolitano Stadium, called Wanda Metropolitano for sponsorship reasons, has been the home venue of Atlético Madrid since the 2017-18 season. The stadium currently has a capacity of 68,456 and originally opened in 1994. So, despite Atlético Madrid moving in for the 2017-18 season, it is not a new stadium, but was renovated for a cost of €240 million ($283 million) for their arrival.

In fact, when the stadium first opened it had a capacity of just 20,000 as a single-tier oval-shaped stadium. The stadium was used for minor sports and cultural events during its first decade. It was ultimately closed in 2004, and Atlético Madrid took over ownership in 2013 to start the renovations.

Atlético Madrid called Vicente Calderon Stadium their home from 1966-2017, and that stadium was torn down in 2019. 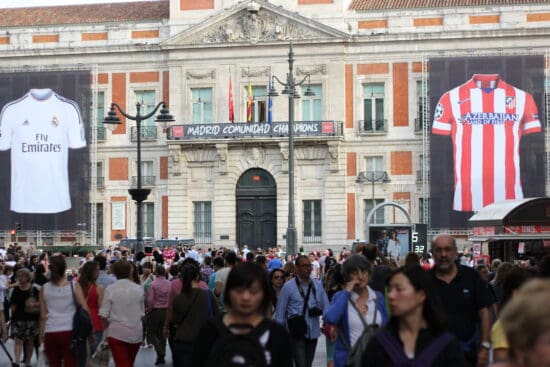 Pride is on the line in the Madrid Derby when Atletico face Real Madrid. (Image: LauraHale, CC BY-SA 3.0, via Wikimedia Commons)

When you share a city with one of the biggest and most successful European clubs (Real Madrid) how can they not be a rival? Historically, Real Madrid have been viewed as the establishment club, while Atlético Madrid have been less glamorous and played with more of a sense of rebellion. That rebellion comes from the days when Spain’s own government called Real Madrid “the best embassy we ever had.”

Madrid is a top international tourist destination. Located in the center of Spain, it is the capital and most-populated city in the country. Madrid is also the second-largest city in the European Union, only surpassed by Berlin.

There are countless architectural marvels to visit while in Madrid, and the Prado Museum and the National Palace are at the top of all must-see lists.

Barcelona is about a three-hour train ride down to the southeast corner of Spain. And for those groundhoppers who want to travel from London to Madrid, roundtrip airfare can be found for under $200.

How to Watch La Liga on TV in the USA

Getting Tickets From Atlético Madrid

Groundhopper Soccer Guides is an official reseller of Atlético Madrid tickets and hospitality packages. Check this page for more information, or just fill out the form below, and we will be in touch!