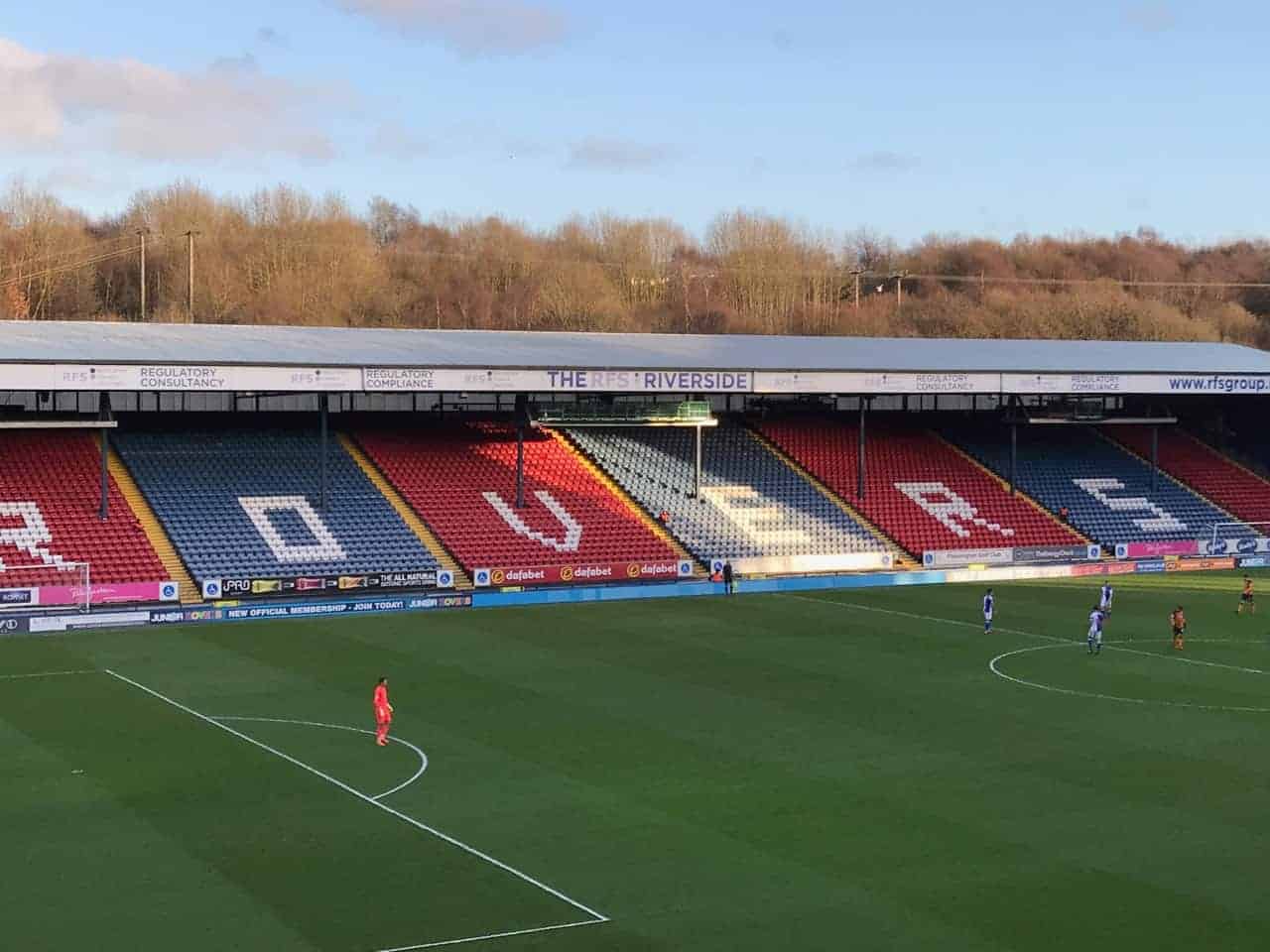 Nobody here but us staffers.

Blackburn Rovers are one of the bigger clubs in England that you’ve probably not heard of. And you’ll have to go a long way to find a more traditional club than this Lancashire outfit.

So let’s take a moment to get to know Blackburn Rovers FC. What follows is their chapter in my book, The Groundhopper’s Guide to Soccer in England. Get your copy now! 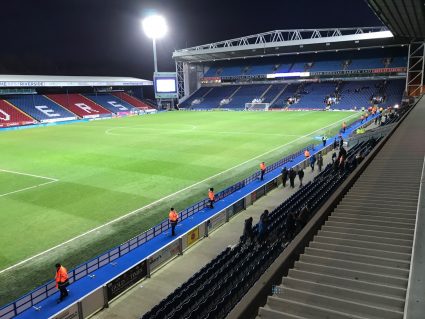 A truly traditional club in a classic northern town, with an old-school ground and great uniforms, Rovers are on the way back up.

Blackburn, Lancashire is an hour north of Manchester’s Victoria Station.

The Riversiders or just Rovers.

Blackburn Rovers LFC has just been promoted to the Women’s Championship at tier 2. Home games are at Sir Tom Finney Stadium, home of Bamber Bridge FC near Preston. 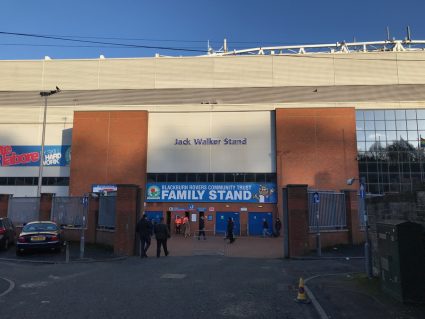 Quick: Name all seven teams that have ever won the Premier League since it was founded in 1992.

The top five are easy – Man City, Man United, Liverpool, Chelsea and Arsenal – and if you’ve been paying attention lately you would come up with Leicester City. The other one? Blackburn Rovers, 1994-95. It really happened; I sat next to somebody who saw it in person.

Of course, their history didn’t start in 1994. It started more than a hundred years before; when they were founder members of the Football League, they already had three FA Cups, which they had won in consecutive seasons. They got two more by the end of the century, won the league twice before 1920, got another cup in 1928 … and then vanished from trophy world for almost 70 years.

They stayed in the top division until 1936 then, after the war, got relegated again in 1948. At this point, one of the weirder traditions in all of English soccer got started. For some reason, a grocer (which Brits call a greengrocer) in the nearby town of Bamber Bridge marked the occasion of Rovers’ relegation by filling a coffin with vegetables (which they just call veg) and burying it. When they went back up, he dug it up again. To this day, when Rovers go up or down, so does the coffin in Bamber Bridge, accompanied by a party-atmosphere funeral parade with costumes, speeches, and everything. Preston North End FC, just a few miles away, has picked up on it as well. 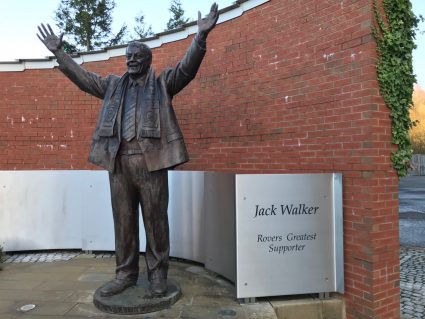 After another coffin burial in 1966, Rovers were out of the top flight for 26 years, but they got pulled out by a lifelong fan, Jack Walker, who had made millions in steel and bought his favorite club in 1991. He broke the national transfer record twice, dropped £20 million on a stadium rebuild and put up a new training ground and academy. He hired Liverpool legend Kenny Dalglish as manager, and in 1992 Rovers made the top flight again, this time into the newly formed Premier League.

They won it in 1995, with Alan Shearer banging in the goals, but he was sold to Newcastle in 1996 and Rovers went back to being somewhat ordinary. They won the League Cup in 2002 and spent the next 10 years in the Premier League, but new owners came along, two more relegations came, and last year they found themselves in League One. They finished second, though, so sometime this summer they’ll dig up the coffin again and get started in The Championship.

Their biggest rivals are Burnley, with whom they share the East Lancashire Derby. The towns are only 11 miles apart. Preston North End, just 10 miles away, are also disliked, as are pretty much any of the clubs around Lancashire.

Their anthem is a rocking adaption of an Irish folk song called “Wild Rover.” In the original the singer says he’ll never “play the wild rover” no more. But at Blackburn the lyrics start out:

I’ve been a wild rover for many a year

And spent all my money on this seat right here.

And the famous chorus is adapted as:

No, nay never no more

‘Cause I’ll stay a wild rover

I couldn’t find a good video of fans singing it, so click here to listen to this “official” version.

11th in the Championship, 3rd Round FA Cup, 2nd Round League Cup 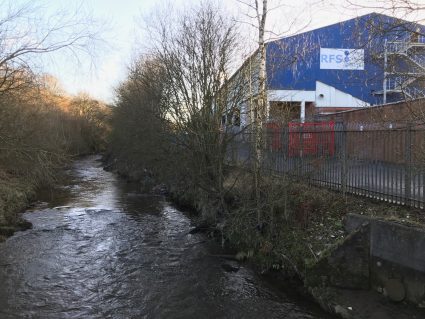 Why they are called the Riversiders.

They have played at Ewood Park since 1890, though of course the stadium structure is nowhere near original. Three of the stands were built in the 1990s, and total capacity is 31,367. Also, as an occasional listener to the “Men in Blazers” podcast, I was thrilled to find myself walking towards it on Tweed Street. There is a river behind the oldest and smallest stand (hence their nickname), a memorial garden in which you must ask permission before spreading any ashes, and a statue outside of Jack Taylor, identified as “Rovers Greatest Supporter.”

Away fans will be in the Darwen End, with home rowdies in the opposite Blackburn End. The main stand is the Jack Taylor. You might want to sit in the Riverside Stand for the old-fashioned feel and a good view of the rest of the place.

Offered a few times a month for £7.50; contact the club for details.

Last year adult prices were from £22 to £29, but with the promotion those may rise. I doubt any games will sell out aside from perhaps the derbies. 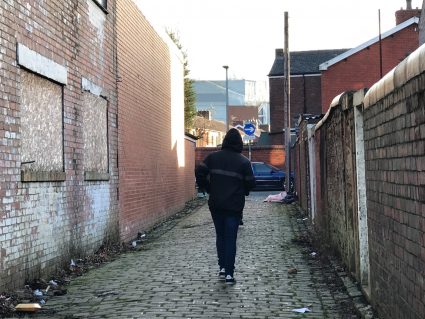 Proper approach to a football ground.

It’s almost two miles from the station to the ground; you can take bus #1 (bound for Darwen) right across from the station, and it stops right by the stadium. You can also take a local train to Mill Hill and walk about 15 minutes from there.

The two closest are the Fox and Hounds, which looks a tiny local pub, and the Fernhurst, more modern and with outdoor seating. Better options are in town, near the station. There’s a large Wetherspoons called the Postal Order nearby, and around the other side of a big mall is a historic street where you’ll find the Drummers Arms, The Squire, and the Sir Charles Napier. 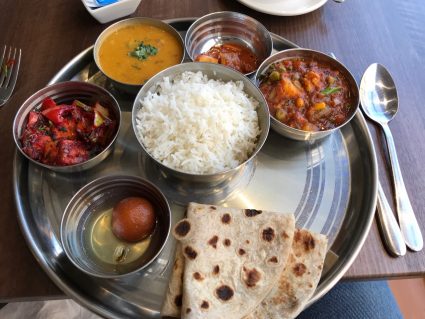 My awesome lunch at Thira Restaurant.

More than one English person, when I told them I was headed for Blackburn, told me I would find good curries there. This is because the town has one of England’s highest ratios, 30 percent, of South Asians in its population. And I did find an outstanding Indian meal on the way to the ground at a restaurant called Thira, right across from The Postal Order. I also spotted what looked a proper sit-down chippy called The Queen Vic on my walk up to Corporation Park. There’s a more central, more traditional take-away chippy in town called The Chippery. 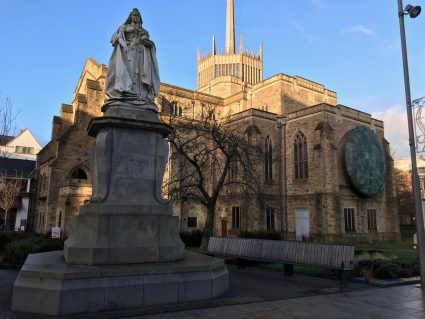 Queen Victoria, I presume? (Not pictured: a bone-chilling wind.)

Blackburn, Lancashire: If that town name sounds familiar to you, it’s because John Lennon sang about the 4,000 holes there. And that, in turn, is because he read a newspaper article (“I read the news today, oh boy”) about 4,000 potholes in Blackburn’s streets. So there you go.

Blackburn is the kind of town where if you look on TripAdvisor for the Top 10 Things to Do, you see a park, a museum, a “living farm,” another park, a historic home with gardens, an art gallery, a shopping mall, and probably another park. It is also the town that inspired me to write my Standard Northern English Town Story, which is in the post below:

Click here to read a more detailed version of my day in Blackburn.

I have learned, however, that every place is worth a walkabout before the game. Blackburn’s cathedral is right outside the station, as is a big statue of Queen Victoria. I walked up through the historic district to the nice Corporation Park, admiring the Town Hall and other 19th century buildings along the way. I hit up the Lewis Textile Museum to learn about the town’s cotton-making past (a mile of cloth every 20 seconds from over 100,000 looms) and admired the art museum, especially the collection of Japanese prints. Then I stuffed myself with Indian food and hit up a really boring third round FA Cup game against Hull. And it was cold!

I look forward to going back now that Rovers, and their coffins, are on their way back up.

More “Get to Know” Features: