Join a crew of footy enthusiasts for a day of Ted Lasso sightseeing, lunch in a London market, and a League One London derby at AFC Wimbledon.

Combine a fictional tale with a (true) fairy tale on this Boxing Day 2021 groundhop.

We’ll take in some of the Ted Lasso filming locations, have a pint in Ted’s pub, check out the shops on his street, maybe pick up some AFC Richmond gear, and then it’s off to Wimbledon for lunch in a local market and the derby featuring fellow London club Charlton Athletic in League One.

AFC Wimbledon is a “phoenix” club that rose from the ashes after the owner of Wimbledon FC moved the club to Milton Keynes to become MK Dons. They started in the 9th tier of English football and rose all the way to the third tier, even passing MK Dons at one point, and now they have built a new stadium in their traditional home, Plough Lane. 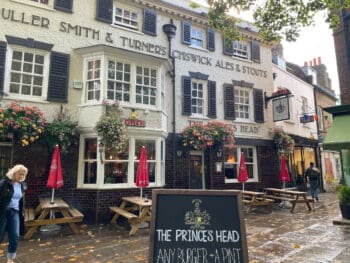 Ted Lasso’s “local” is the Princes Head on Richmond Green.

Included in this Groundhop:

Not Included in this Groundhop:

Check out this post or the following video to find out more about Groundhopper Soccer Guides’ group outings:

Are you just looking to see a game in England or Europe? Or perhaps you’d like a customized, private tour? Groundhopper Guides can help! Fill out this form, and we’ll get back to you shortly.