Here are the English women’s football schedules and some updates for the 2021-22 season.

The Women’s Super League (WSL) was formed in 2010, with the first season being 2011, and currently has 12 teams. Just like the Premier League was renamed from the Football League First Division in 1992, the WSL was previously called the Women’s Premier League National Division from 1991-2010.

Only four different clubs have claimed the league trophy since the rebranding: Chelsea (4 times), Arsenal (3), Liverpool (2) and Manchester City (1). Chelsea have won the championship the last two seasons, and three of the last four overall.

The WSL champion, second place and third place teams qualify for the Women’s Champions League the following season. Arsenal has been the only English club to win a Champions League trophy (in 2007); Lyon from France has dominated with seven overall including five of the last six.

Following last season, Bristol City were relegated while Leicester City earned promotion for the first time. The 2021-22 season will start the weekend of September 3-5. Sky Sports has committed to broadcasting at least 35 WSL games in each of the next three seasons. Here is the complete 2021-22 Women’s Super League schedule. 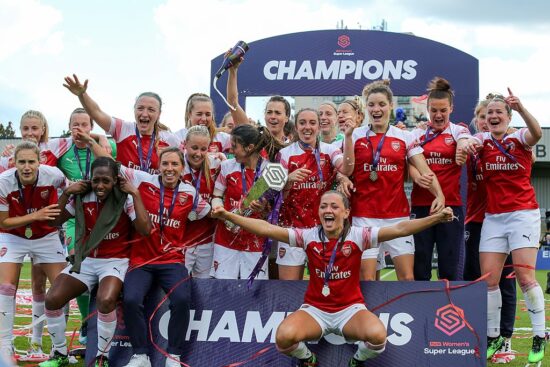 There have been lot of Arsenal trophy celebrations in English women’s football. Here they celebrate the 2018-19 WSL title. Katie ChanCC BY-SA 4.0 Wikimedia Commons

The second division was renamed the Women’s Championship in 2018, and is currently the second-highest division with 11 teams. The Women’s National League is the third tier and is broken up into two divisions of 12 clubs each. The rest of the pyramid gets a lot more confusing so we will reference Wikipedia for the breakdown.)

Following a three-month hiatus during the second round proper of the tournament from January 4 to April 4, 2021 due to the pandemic, the final stages of 2020–21 Women’s FA Cup were delayed until the 2021–22 season. The competition will recommence at the quarter-final stage on September 29, 2021. The semi-finals are provisionally scheduled for October 31, 2021, and the final will be played at Wembley Stadium on December 5, 2021.

The 2021-22 edition will be the 52nd Women’s FA Cup. A total of 376 teams entered last year, up 76 from the previous competition. The Preliminary Rounds kick off in late August, leading up to the Final on May 15, 2022. For the first time in history both the Women’s and the Men’s finals will be played the same weekend at Wembley Stadium.

The 21st edition will be the first time to feature a 16-team group stage. Barcelona broke Lyon’s stretch of five straight titles last season, and the 2022 final will be held in Juventus Stadium in Italy. Chelsea, Man City and Arsenal will represent the WSL.