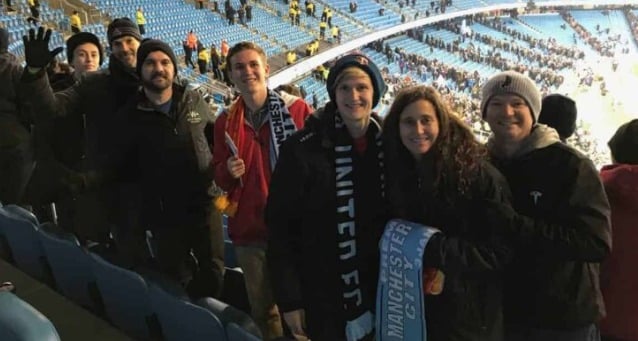 What is a Public Groundhop Tour?

Our Groundhop tours are open to travelers from around the world.

We currently offer public soccer tours in the UK. We will tour Premier League stadiums, hit just the right pubs before the games, meet local supporters, and visit some of the little tourist treasures we have found on our soccer travels.

You don’t have to sign up for the whole thing; it’s all a la carte, meaning you can drop in for as much or as little as you want, from just one game to several days of fun. A more extensive groundhop would include at least five games in two or three different cities, going to Premier League, Championship, and lower-league games, and probably an FA Cup game.

A typical day on a Groundhop starts with a tour of a Premier League stadium.

Next, we will head off to a local pub to get into the pregame atmosphere for our afternoon game. We will meet with supporters of today’s home team, learn a bit about the club, swap some stories, and maybe learn a song or two.

And then, the main event: A live game of English soccer. It could be anything from Premier League big boys to a semi-professional neighborhood club. But we will go as a group, sit together in the best seats we can get, and be right in the middle of the action. Using Paul’s experience having seen well over 100 games in the UK, we will pick a game with the best atmosphere no matter where it is.

Find out more in this video: