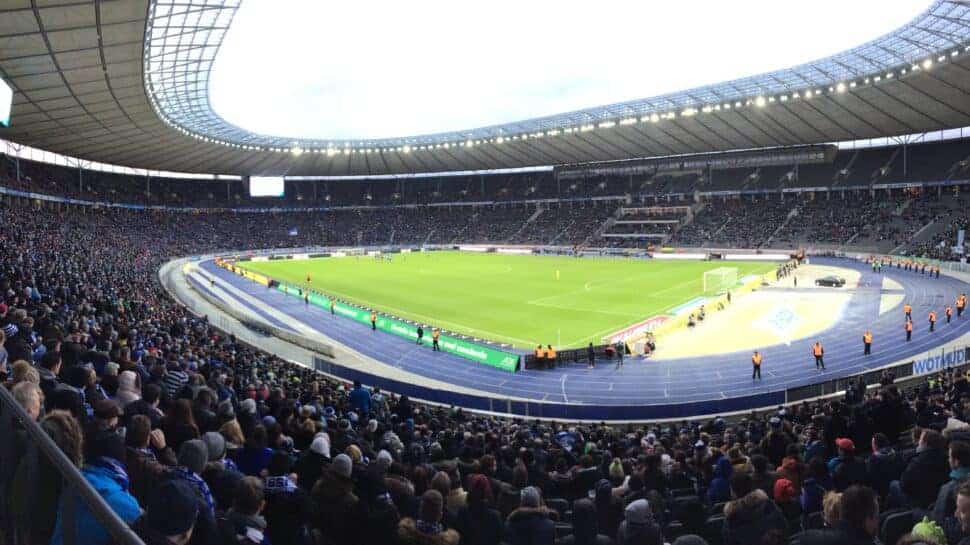 The Olympiastadion in Berlin hosts the annual final of the DFB-Pokal. (Image: kallerna, CC0, via Wikimedia Commons)

Berlin is the most populated city in Europe, but the two biggest clubs that reside there do not offer much of a football-rich winning tradition. Groundhopper Guides introduces you to the extremely unique history of Hertha BCS of the German Bundesliga.

Looking for Hertha Berlin tickets? Skip ahead to request a quote for any home game.

Commonly referred to as Hertha BSC, and sometimes Hertha Berlin, or simply Hertha, they are one of two German Bundesliga clubs from Berlin. The club is known by the affectionate nickname Die Alte Dame (The Old Lady), and Hertha is also a reference to the fertility goddess. The club was originally named for a steam ship, just because the two founders apparently thought it was a cool name, and their colors come from the ship’s blue and white smokestacks.

Hertha is based in the Westend neighborhood in the borough of Charlottenburg-Wilmersdorf in the western part of Berlin. Their stadium is about six miles west of Berlin’s center. 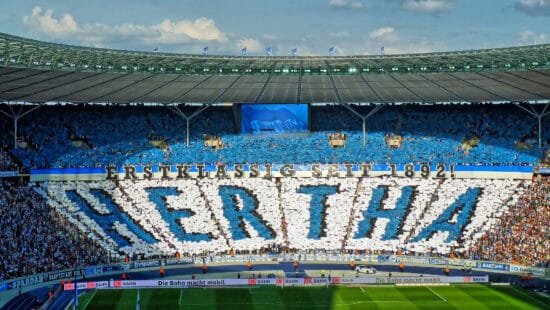 The stadium dates back to the 1936 Olympic Games. (Image: Frankinho from Berlin, Germany, CC BY 2.0, via Wikimedia Commons)

The club was founded in 1892, and was a founding member of the German Football Association in 1900 (86 founding clubs were represented at the inaugural meeting). Due to financial trouble, Hertha merged with Berliner Sport Club in 1920, and went on to win championships in 1930 and 1931.

Following World War II, the club was briefly renamed SG Gesundbrunnen and played in a new West German league due to the division of Berlin at the time.

When the Bundesliga was formed in 1963, Hertha were invited to the top tier of German football.

However in 1965, the German Football Association found Hertha guilty of bribing players from East Berlin to join the squad, and they were relegated to the regional leagues.

Another scandal was uncovered in 1971, as several clubs were accused of matchfixing in the Bundesliga. Despite the scandal and financial woes, Hertha finished in second place in 1974-75 and then made the semifinals of the 1978-79 UEFA Cup, forerunner to today’s Europa League.

But it was back to the second division for 13 out of the next 17 seasons beginning in the early 1980s.

When the club was promoted in 1997, it ended a six-year Bundesliga drought without a squad from Berlin. Heading into the 2021-22 season, Hertha have played in the top division 22 of the last 24 campaigns but have never won a Bundesliga title. 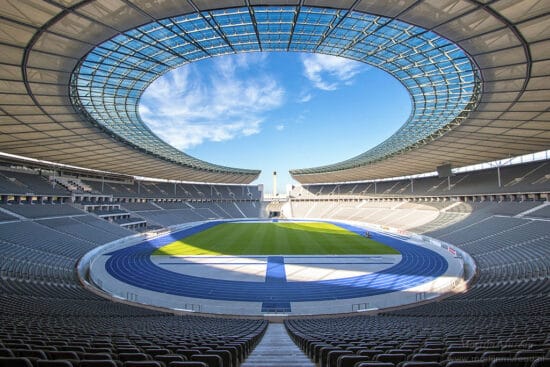 Located at Olympiapark Berlin, the Olympiastadion has served as the home venue to Hertha since 1963. The stadium was originally built for the 1936 Summer Olympics, and set an Olympic attendance record with a capacity of over 100,000 for a baseball game.

The first of two World Cups were played inside the stadium in 1974. In the group stage games, both East Germany and West Germany advanced out of group play after both played a game in the venue.

After Berlin was reunified in the 1990s, the city was split on what to do with the stadium due to the legacy it represented with Nazi Germany. Some wanted to tear the stadium down to make way for a brand-new complex, while others wanted to leave it and watch it crumble without any upkeep.

A third option (renovation) won out, and after undergoing its most recent renovations in 2004 in preparation for the 2006 World Cup (at a cost of $350 million), the Olympiastadion now has a capacity of 74,475 and is the largest stadium in Germany for international games. Both Dortmund and Bayern Munich have capacities listed as higher, but their totals include both seated and standing fans; Hertha only offers seated options.

One of the stadium’s signatures is the recreation of a 1930s-era bell tower which was the only part of the Olympic Park to be destroyed during (actually just after) World War II. The bell survived, although it can no longer ring, and is now on the grounds as a memorial, as well.

The stadium has hosted a pair of major finals, the 2006 World Cup (Italy defeated France on PKs) and the 2015 Champions League Final (Barcelona defeated Juventus, 3-1).

To the interest of American football fans, the stadium served as host to preseason NFL games from 1990-94, and was the home of NFL Europe’s Berlin Thunder from 2003-07.

Hertha’s lease with the Olympiastadion runs out in 2025, and the club has proposed building a brand-new 55,000 seat venue. So far, there have been limited plans revealed or a start date proposed for construction.

As an example of how football parallels the “real world,” Hertha is based in the western part of the city, and 1. FC Union Berlin is based in the east — but they are separated by only 14 miles.

Despite years of conflict in the city itself, Hertha and Union Berlin don’t have too much of a rivalry on the pitch due to the fact they have not played each other very often. Union have generally been in lower leagues.

When the two clubs do meet in the Bundesliga, it is known as the Berlin derby. The derby has only taken place eight times leading into the 2021-22 season (21 times overall if you include friendlies). In fact, 2019 was the first derby when both clubs were in the Bundesliga at the same time.

This epic video tells you all you need to know about the derby, but even more so about the football scene in Berlin.

The City of Berlin

With 3.8 million residents, Berlin is the largest city in Europe and the capital of Germany. Its rich history dates back to the 13th century; after World War II the city was divided, with the western half surrounded by the Berlin Wall (1961-1989).

Berlin is a world-renowned city of culture, politics, media and science. It has a highly complex transportation network, and is a very popular tourist destination.

The Zoological Garden is the most visited zoo in Europe. Among the most popular places to visit within the city are: The Brandenburg Gate, the TV Tower, the Gendarmenmarkt, the Nikolai Quarter, and the Berlin Wall Memorial.

Watch as Rick Steves’ takes us on a tour of Berlin:

How to Watch Bundesliga games on TV in the USA

Last season was the inaugural season of ESPN+ being the U.S. home to the Bundesliga. The network will once again broadcast 306 matches during the 2021-22 season. 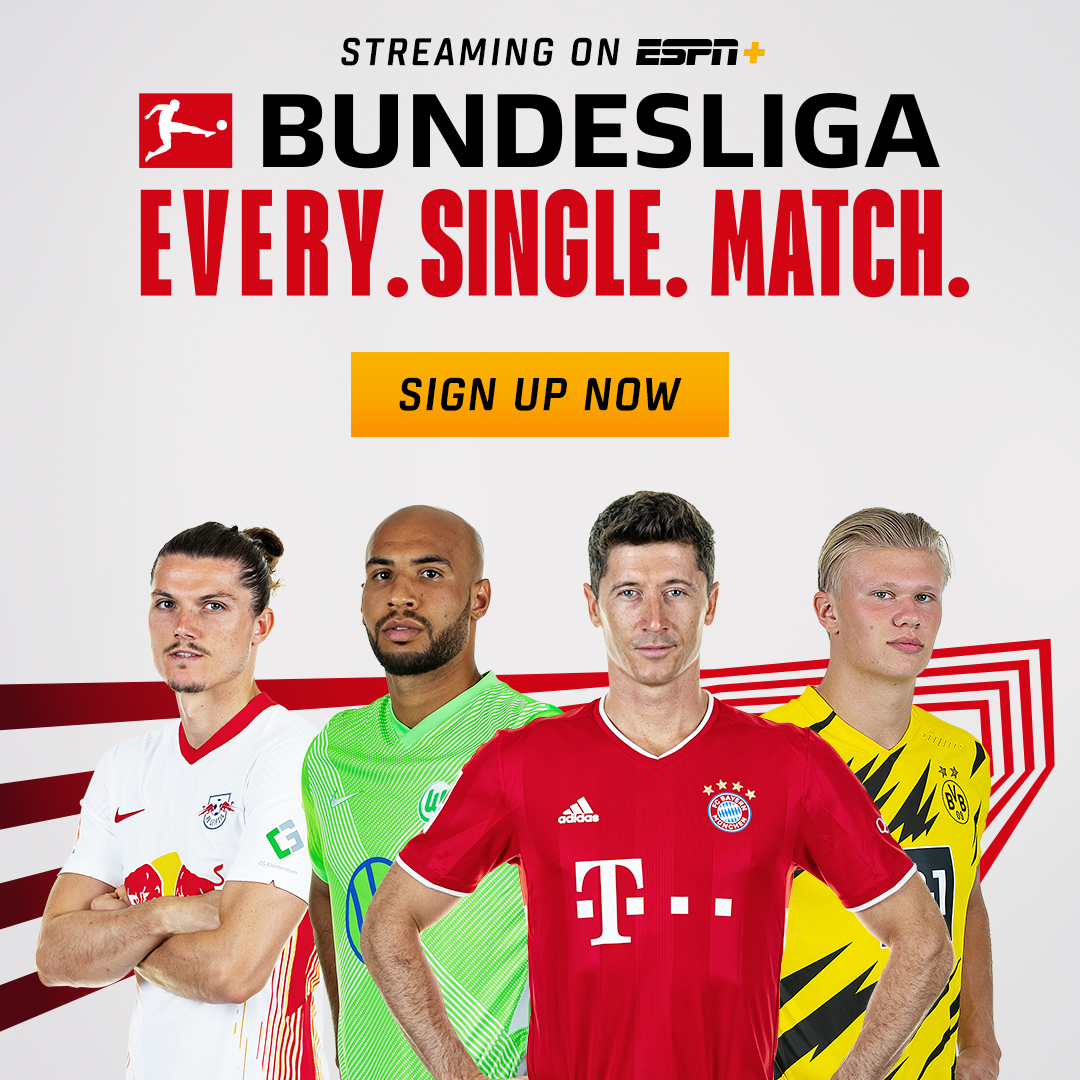 Watch Bundesliga soccer on ESPN+ in the US.

Getting Tickets to Hertha Berlin

Groundhopper Soccer Guides is now an official reseller of Hertha BSC tickets and hospitality packages. Check this page for more information, or just fill out the form below and we will be in touch! 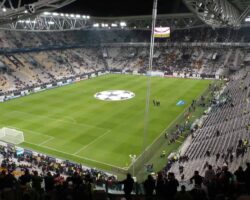 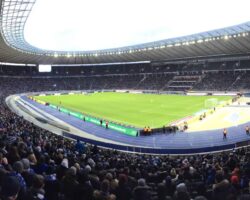