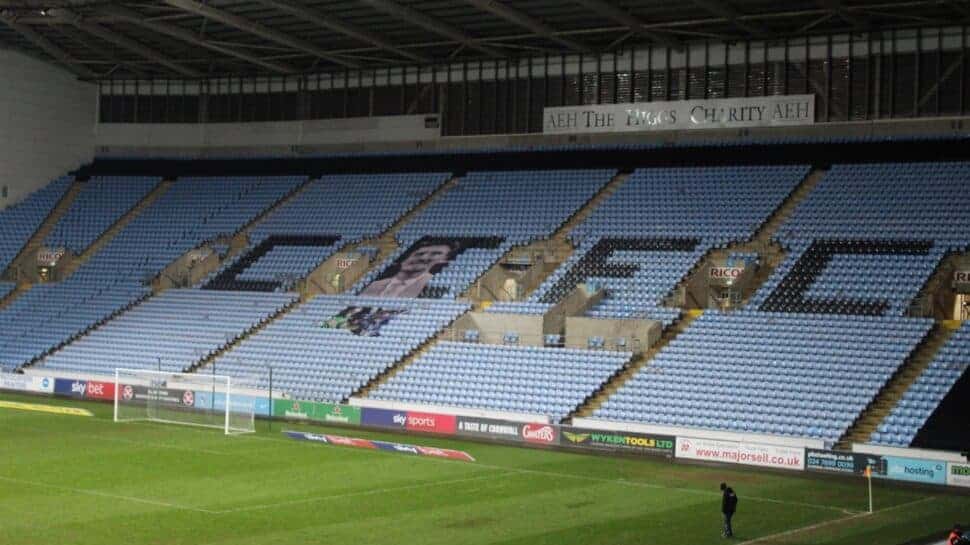 Let’s say hello to Coventry City, a historic English football club currently back in the second tier but recently forced to play away from home.

This was originally written as a draft chapter for the 2019-20 edition of my book, The Groundhopper’s Guide to Soccer in England. 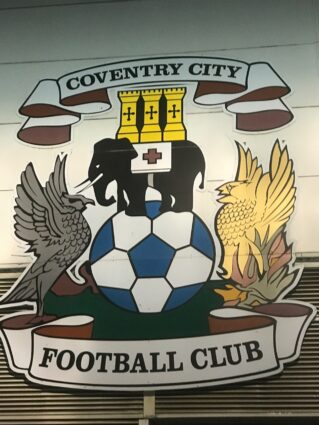 A club that is bigger than it currently appears to be, Coventry are being held back by a toxic relationship between ownership and fans.

Coventry is about 20 minutes by train from Birmingham, a little over an hour from London. But that’s not where they are playing.

Coventry City doesn’t have a women’s team, but Coventry United, a 9th-tier men’s club in town, does. They play in the Women’s Championship at tier 2 of the pyramid, with home games at Butts Park Arena in Coventry. For more information, see coventryunited.co.uk/ladies. 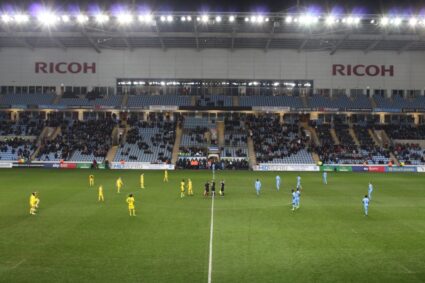 Kickoff before a game at Ricoh Arena in Coventry.

Coventry City used to be a thing. They were founded in 1883, took their current name in 1898, and made the Football League after World War I. Legendary manager Jimmy Hill — who also hosted Match of the Day on BBC for many years and whose face is on a banner over empty seats at every game — got them to the top tier in 1967, and they stayed there for over 30 years. They even won the FA Cup in 1987, winning at Manchester United along the way and beating Spurs in the final. The bus they rode around the city in afterwards is now in the Transport Museum in town. 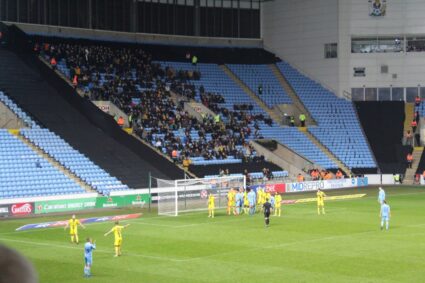 Away fans, in this case from Burton Albion, in the southwest corner.

They were founder members of the Premier League in 1992, but about 10 years later the trouble began. Relegation, a manager carousel, financial troubles — it’s a common story, which in this case wound up with a sale of the club in 2007 just before bankruptcy was to hit. In 2012 they went down to League One, and in 2013 they were kicked out of the Ricoh, playing home games for two seasons at Northampton Town, some 35 miles away. In 2017 they went down to League Two. There have been protests and a petition by fans and former players, begging the owners to sell and go away.

On the pitch, things have been looking up. They won the League Trophy at Wembley in 2017, and in 2018 they finished sixth in League Two, then won the playoff to get back into League One. But in 2019 the stadium trouble returned, and they had to ground-share with Birmingham City. This got interesting when they drew each other in the FA Cup; the first game at St. Andrews was a Coventry “home game” and ended in a draw. So a week later, Birmingham got their home game, at home, and won it on penalties.

Still, Coventry City won League Two (and promotion to the Championship) in the Covid-shortened 2019-20 season, and they are back at Ricoh Arena for the 2021-22 season. 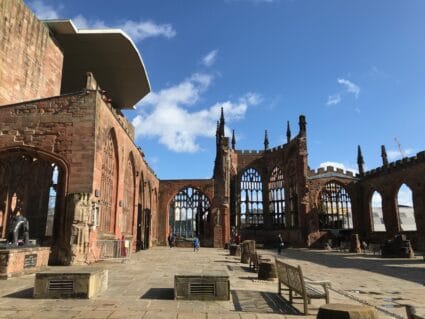 Ruins of the old cathedral in town.

Traditionally all the other Midlands clubs: Aston Villa, Birmingham City, Wolves, etc. I also heard some singing about Leicester City. When they dropped down the leagues they were more about Walsall and Burton Albion — though I saw them play the latter and no one in the crowd of just over 11,000 seemed too bothered about it.

There are two main ones to know. One is “Let’s All Sing Together,” also known as “Play Up Sky Blues,” which you can see and hear at this link. There is also a band version of it they play as the teams come out. But I really like “In Our Coventry Homes,” with the words:

In our Coventry homes,

We speak with an accent exceedingly rare,

You want a cathedral we’ve got one to spare,

In our Coventry homes…

We’ll get to the cathedral thing later. They will also sing “Twist and Shout” on occasion. 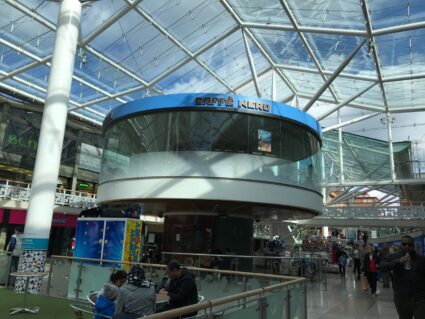 A crazy Caffe Nero in town.

16th in the Championship, 3rd Round FA Cup, 2nd Round League Cup 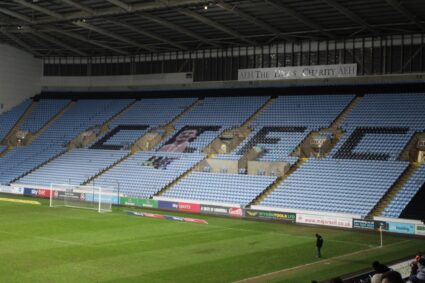 The Ricoh Arena opened in 2005 and is a lovely, modern, comfortable stadium with 32,609 sky blue seats. It’s also the home of a rugby club called Wasps, and the fact their logos are more prominent around the ground seem to suggest they are a bigger deal.

It’s a little over three miles from the station, next to a shopping center, so it lacks for atmosphere externally. But with steep seats and a fully enclosed building, it could be a really fun (and loud) place to visit if the fans have much to cheer about.

Away fans will be in the southwest corner, so I would suggest sitting in the East Stand.

Last year it wass £20 for adults and £7 for under-16s. The only way it comes close to selling out is if they draw a big Premier League club in a cup. 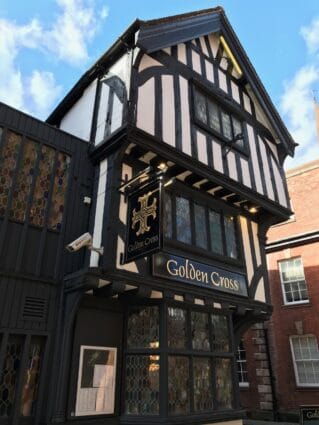 I had a nice meal at this 16th-century pub.

Getting to Coventry and Ricoh Arena:

Coventry is 20 minutes by train from Birmingham, on the line to London Euston. So you could get there in about an hour from London.

The Ricoh Arena has its own train station, which makes getting there from the Coventry Station easy. 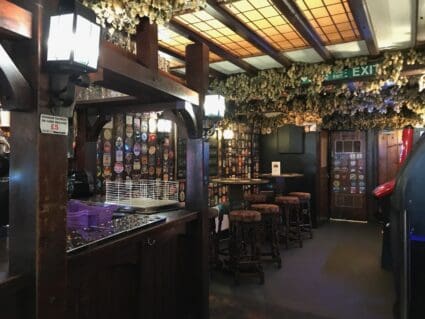 Inside The Old Windmill.

There is really nothing right by the stadium, but about 10 minutes away is the Greyhound Inn, noted for good food and outdoor seating next to a canal. There are more and better options in town. Over by the cathedral look for the Golden Cross, which dates to 1583 (though it’s been massively redeveloped recently) and has a good menu of pub classics. The Artisan Bar and Grill is also nice, and just near the station is a big place called the Litten Tree that looks a standard modern pub with cheap food.

Aside from the pubs mentioned above, there is a shopping center in town called the Lower Precinct with plenty of chain outlets. 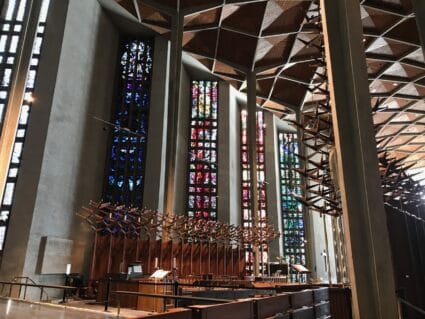 If you’re into architecture, you may heave heard of Coventry. That’s because in 1940 their beautiful cathedral was destroyed by a German bombing raid, and they completely rebuilt it. The result is a rare modernist cathedral, opened in 1962 and famous for stained glass and a massive tapestry behind the high altar.

It would appear from the song mentioned above that at least some locals don’t like it, but I think it’s well worth a visit. The ruins of the old one are next door, and one of the things claimed was two old timbers that landed in the shape of a cross in the destruction and were preserved that way. 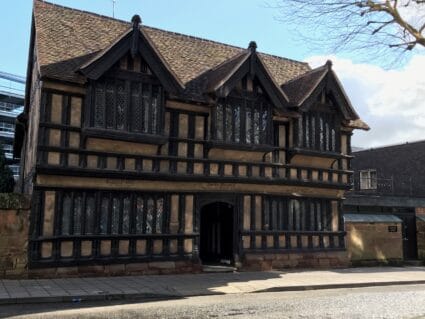 There are a few museums around town, including transport, music and a couple of air museums.

Elsewhere around town, there are a number of old buildings, especially along Medieval Spon Street, where you can also find a pub dating to 1451 and called The Old Windmill, with five-foot-tall doors and tiny rooms with a stove in each. It’s super cozy. 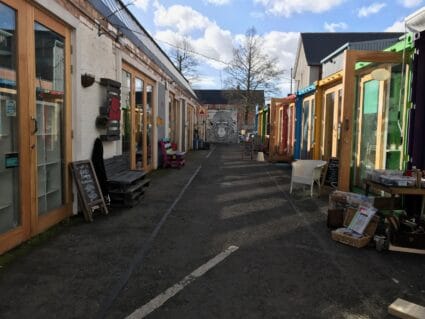 There is a dash of hipster culture in town as well, particularly at a place called Fargo Village, named for Far Gosford Street where it’s located — a street which still has old school barbers and discount stores but also now has a tattoo place and an artisan coffee house. Gentrification right ahead!

Fargo Village is a former industrial site now converted to little stalls where local businesses have set up shops — clothing, art, coffee, etc. It’s really cool. One of these locations is the Sgt Bilko’s Vintage Emporium & The Phil Silvers Archival Museum. You have to see this place and meet the owner, Steve. I’m serious; you have to. 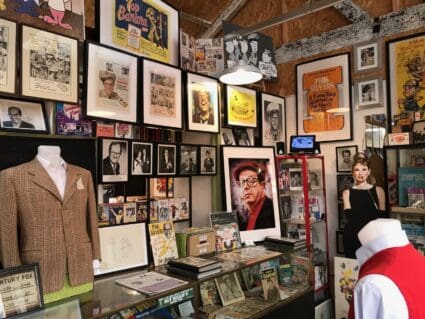 Who was Phil Silvers? He played Sgt. Bilko, a character in a 1950s sitcom who, should old-timers like me Google him, will be recognized right off. He had a long career as a comedian, actor and Broadway star and was quite a bit more popular in the UK than in the US, in part because he was in something called “Carry On Films.” But I’ll let you go to the museum and ask Steve; he’ll tell you all about it!

Here are a few more photos from my exploration of Coventry: 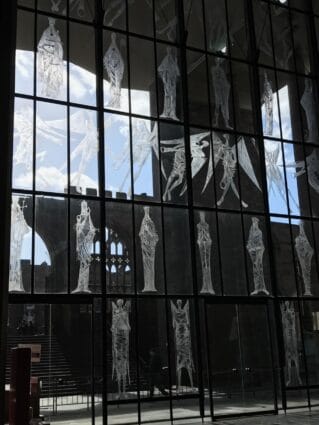 More art in the cathedral. 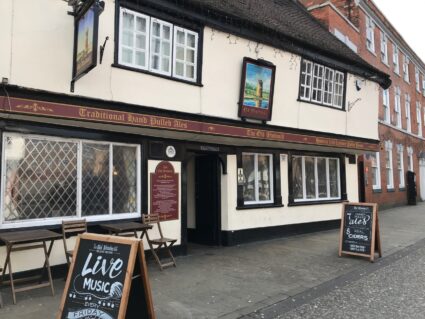 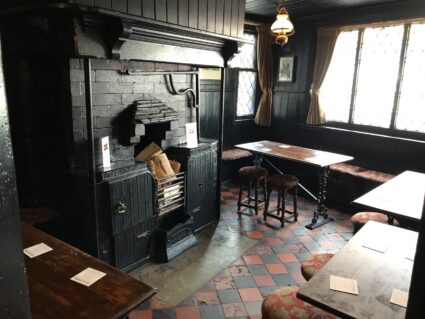 Inside The Old Windmill. 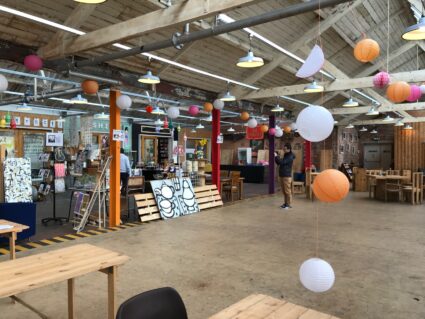 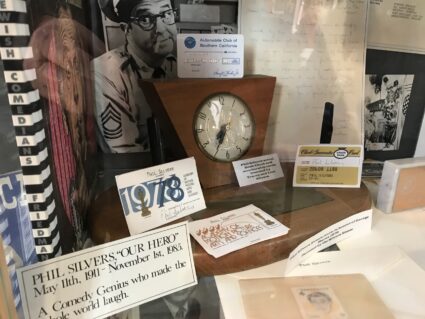 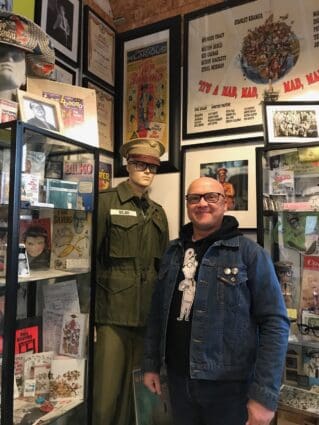 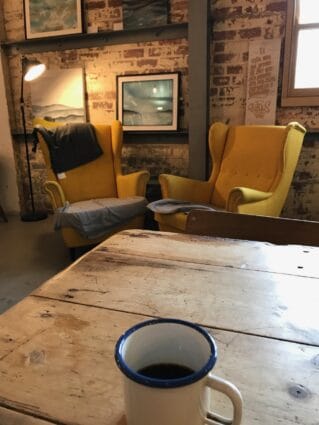 One last cuppa before I get on the train.

More “Get to Know” Features: