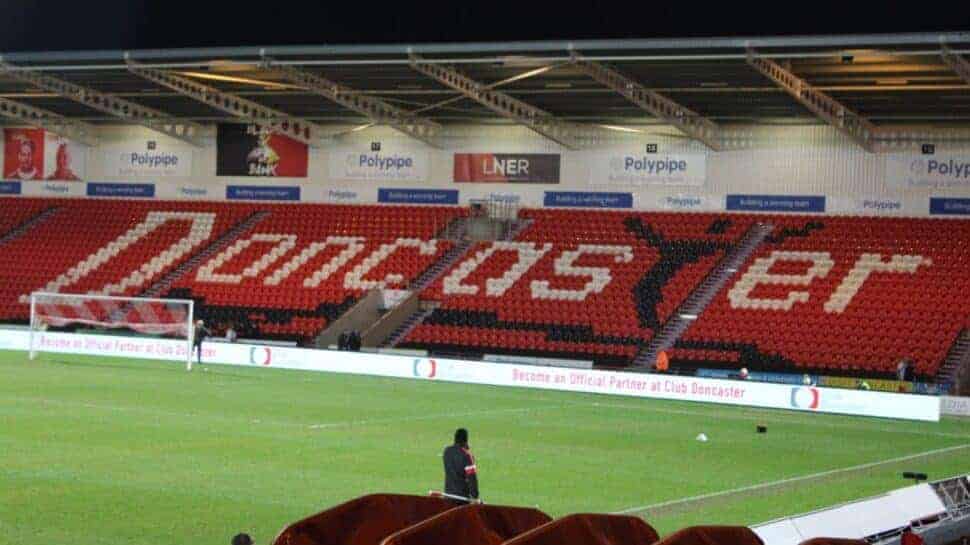 Home end of the Keepmoat.

Every now and then Groundhopper Guides introduce our readers to a club they probably don’t know much (or anything) about. In other words, this series won’t include posts on Manchester City or Tottenham. This time we’re in South Yorkshire for a visit to League One’s Doncaster Rovers.

Who are Doncaster Rovers? A mid-sized club in a mid-sized town in Yorkshire, pretty much in the middle of the country. Rovers are safely one of the best clubs in the history of the third and fourth tiers.

Doncaster, South Yorkshire, is about 90 minutes from London Kings Cross and also from Manchester.

Doncaster Rovers Belles, believe it or not, used to be the dominant force in the women’s game in England. They made 11 of 12 FA Cup finals from 1983 to 1994, winning six! They also won two of the first three league titles in 1992 and 1994, adding the Cup both times. They are now down to the fourth-tier National League Division One Midlands. See doncasterroversfc.co.uk/belles for more. 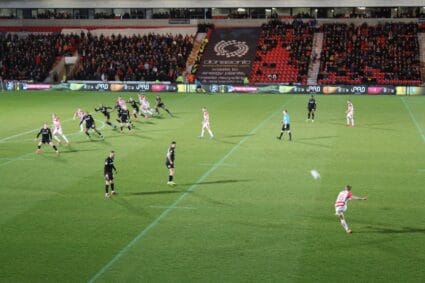 Free kick during the derby with Barnsley.

From their founding in 1888 to World War II, Rovers only poked into the second tier for two seasons in the late 1930s. In 1946 they played in the longest match in history. In those days you played until somebody won, and their 2-2 draw at Stockport County lasted 203 minutes before finally being called for darkness. Legend has it people went home for tea and then came back to see the end.

From then through the late 50s, they spent eight years in the second tier, their best spell in history. The next interesting thing to occur was when their owner, Ken Richardson, drove them off a financial cliff in the 1990s. They were relegated with a minus-83 goal differential, the fans held a funeral for the club at the ground, and two weeks later Richardson was convicted of hiring three men to burn down the ground for the insurance money! The fire started but was put out after doing moderate damage.

They rebuilt under new ownership and took part in another bit of footballing history. England doesn’t really do “sudden death” or “golden goals,” but for a brief time they did in the Conference (now National League) playoffs. And Rovers were the only team to win promotion with one, taking the 2003 Conference Playoff Final 3-2 over Dagenham and Redbridge.

In the 2005-06 League Cup, after beating Manchester City and Aston Villa along the way, they made the quarterfinals and took Arsenal to penalties. Two years later they won the League One playoff final at Wembley (1-0 over Leeds) and spent three years in the second tier, their first time there in 50 years. They spent five of the next six seasons there but have since dropped as far as League Two a few years ago.

They are one of only four teams to win the fourth tier championship three times, so there’s that. 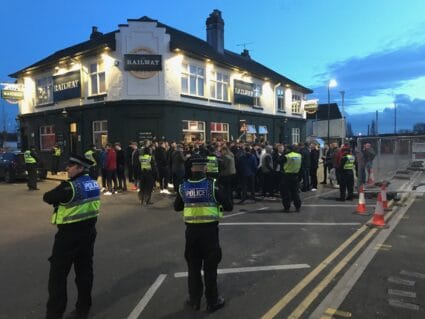 Keeping an eye on the away pub, filled with Barnsley supporters.

Yorkshire neighbors Barnsley, Rotherham United and Scunthorpe United are the main ones, with Chesterfield and the two Sheffield clubs just behind. I saw them play Barnsley when they were top two in the league, and it was a cracking atmosphere with only a few extra police in town. Barnsley are up in the Championship now, and Scunthorpe are in League Two, but Rotherham are back in League One, so look for them on the fixtures list.

Keepmoat Stadium replaced the old Belle Vue Ground in 2006 and has 15,231 seats. It’s also the home of a rugby club and the Doncaster Belles, and the name comes not from some medieval moat nearby but actually from a company that manages council housing.

It’s basically a perfect rectangle with the South Stand also being known as the Black Bank and housing the ultras group of the same name.

It’s not the most exciting place, but it is the only league ground next to a lake, which is bizarrely called Lakeside Lake. It has a trail around it with QR codes you can scan to learn more about the nature and history of the area.

Here are the teams coming out before the Barnsley game:

Last year an adult ticket was around £20, and even the high-stakes derby with Barnsley I went to didn’t quite sell out. 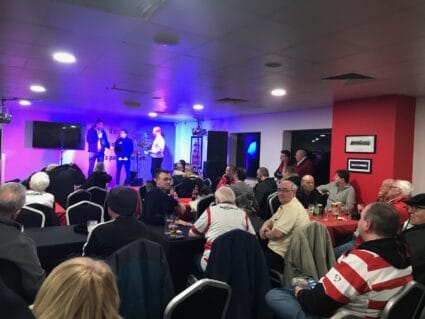 In the supporters’ bar at the stadium.

It’s a mile and half from the station, so about a 30-minute walk. You can also take First Bus 56 (Rossington) from the station; that stops at White Rose Way, a block from the ground. I took a taxi for £8 and walked back.

There are some surprisingly good options for a town this size, starting with the tiny and cozy Draughtsman Alehouse at the station.

Just out of the station, turn right for the Railway and the more traditional Leopard, both designated as away-supporter pubs.

Right in the center, across from the station, there’s a Wetherspoon outlet called the Gate House, as well as the modern, spacious Angel and Royal. The Yorkshire Grey is a neat older pub with a patio and games on TV. The Doncaster Brewery and Tap has won several CAMRA awards, including the city’s Pub of the Year and, in 2018, the Yorkshire Cider Pub of the Year.

There’s a friendly bar at the ground called the Belle Vue, and it also has pies and sausage rolls. Just down the road is the Lakeside location of the family-friendly Beefeater pub chain with its large menu and abundant seating. 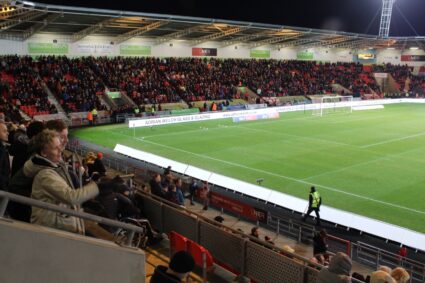 There’s the Beefeater pub near the ground, and several people recommended the Movida Tapas Restaurant on Priory Street next door to the Wetherspoon pub. Same thing for Ada Turkish Barbecue and La Rustica Restaurant. The Clam and Cork Fish Market was also highly recommended, but too crowded when I was there—a good sign. I was in a hurry and ate at the ground, so I’m not a lot of use here!

Doncaster very much fits what I call the Standard Northern English Town Story, with one major exception being that butterscotch was invented there. All praise to Doncaster!

One of the main buildings left over from the old days is the Mansion House, built in 1751 and now home to an art gallery and historical exhibits. Cusworth Hall and Brodsworth House are its country cousins, both with gardens and museums.

Military aircraft buffs will want to book ahead to visit the Vulcan Experience, where they can get up close and personal with a famous Cold War spy plane. Animal lovers may enjoy the Potteric Carr Nature Reserve. 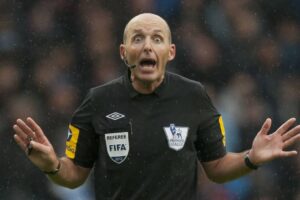 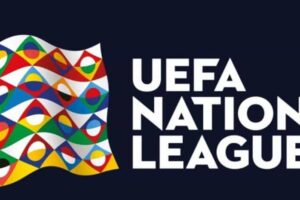 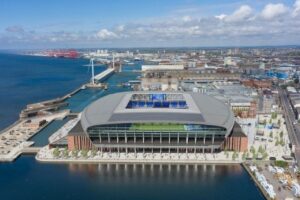