Most groundhoppers know Manchester United and the rich history of the 13-time Premier League champions. But Man U faced a somewhat unknown squad in the 2021 Europa League finals.

An up-and-coming club in La Liga, based out of a coastal city famous for ceramics, Villarreal CF captured their first European Trophy since 2004‘s Intertoto Cup when they downed Man U in penalty kicks (11-10) and won the 2021 Europa League.

Who are Villarreal CF?

Villarreal Club de Fútbol was founded back in 1923, and made its La Liga debut in 1998 after playing in the lower divisions for 75 years. The club battled through relegation and promotion for a couple of seasons after making the top flight, but qualified for the Champions League in 2005 and have played in La Liga for the last eight seasons.

Known for their yellow kits since the 1940s, Villarreal are nicknamed El Submarino Amarillo (the Yellow Submarine) for sporting all yellow at every home game.

What makes Villarreal CF unique? The city has a population of just over 51,000 people, and the club’s home venue seats 25,000 fans. Imagine a home fixture where half of the town is in attendance! 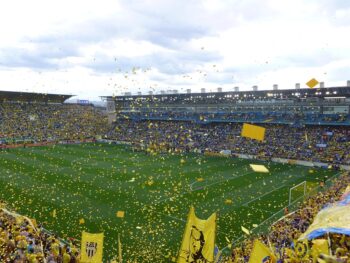 Including the 2020-21 campaign, Villarreal CF have finished in the top eight of La Liga seven of the past eight seasons, with four top-five finishes since 2017. In that same year they made the semifinals of the Europa League, beating Liverpool 1-0 at home but going out after a 3-0 loss at Anfield.

The club has not taken home a first place trophy since 1970, when they earned top honors in the Third Division to be promoted to the Second Division. Since those days, they have staged a remarkable rise, spending 21 of 23 seasons in the top tier, including a second-place finish in the 2007-08 season.

All of this happened, as you might guess, because a wealthy owner purchased the club in 1997. That would be Fernando Roig, who made his money in a family grocery business.

Perhaps the most well-known player to don a Villarreal uniform was its all-time leading scorer, Italy’s Giuseppe Rossi, who made 136 appearances from 2007-13 and scored 82 goals.

After a disappointing 2018-19 campaign that only netted a 14th-place La Liga finish, Villarreal bounced back for a fifth place finish in 2019-20 which qualified them for Europa League.

They won their group with five wins and a draw, then knocked out Red Bull Salzburg, Dynamo Kyiv, Dinamo Zagreb, and finally Arsenal in the semifinals. The title was brought home and the high-scoring round of PKs.

Villarreal finished seventh in La Liga in 2020-21, and qualified for the newUEFA Europa Conference League, but by way of them winning the Europa League they qualified to enter the in the group stage of the 2021-22 Champions League.

Of the 26 players on the current squad, 18 hail from Spain, as do all of the coaching staff. Their coach, Unai Emery, will be recognized by many as the most recent former head at Arsenal.

It marked the fourth time Villarreal have advanced to at least the Europa semifinals, and their first time reaching the finals. They already knocked off one EPL giant, downing Arsenal 2-1 at home in the first leg of the semifinals before a scoreless draw at Emirates advanced the club to the finals.

Villarreal in the Champions League

By winning the Europa League last season, Villarreal qualified to compete in the Champions League for the first time since 2015-16.

The club will be in the Champions League for only the fifth time in their history, and are looking to advance past the group stage for the first time since 2008-09 (quarterfinals). Villarreal’s best finish was reaching the semifinals in 2005-06 before falling to Arsenal 1-0.

Here at the matchups between Villarreal and Man U:

Your biggest rival is usually the club you’re located closest to. As the only two professional clubs located in the province of Castellón, Villarreal CF’s geographically-closest rival is CD Castellón, which has bounced between the second and third divisions since 1992.

But since Villarreal have become a La Liga fixture, Valencia offers the closest competition as they are both from the Valencian Community. Their clashes have been dubbed “Derbi de la Comunitat,” with Valencia holding a 23-19 lead in wins, with 11 draws.

The actual name is cool enough — Estadio de la Cerámica — but the nickname is also pretty sweet: Feudo Amarillo (Yellow Fief). Plus, the stadium is located only five kilometers from the Mediterranean Sea.

The stadium originally opened in 1923, and has undergone multiple renovations, but has stood at its original location throughout the years. Lights were added in 1973 when Villarreal were in the third division.

The capacity of Estadio de la Cerámica is 23,500 seated.

The club is located in its namesake city of Villarreal on the east coast of Spain with a modest population of just over 51,000 people. It’s about a three-hour train ride east of Madrid and 2.5 hours from Barcelona. Valencia is about 40 miles to the south.

Its traditional economy was based on oranges, but today it’s all about ceramics, as the stadium name implies. The city hosts four of Spain’s 500 largest companies — all in the ceramics trade. So you might say it’s pretty much the Spanish Stoke.

There’s not much as tourist attractions go, but a nice little city on the coast with an up-and-coming football club should make you consider a groundhopping run that way.

How to Watch Villarreal Games in the U.S.