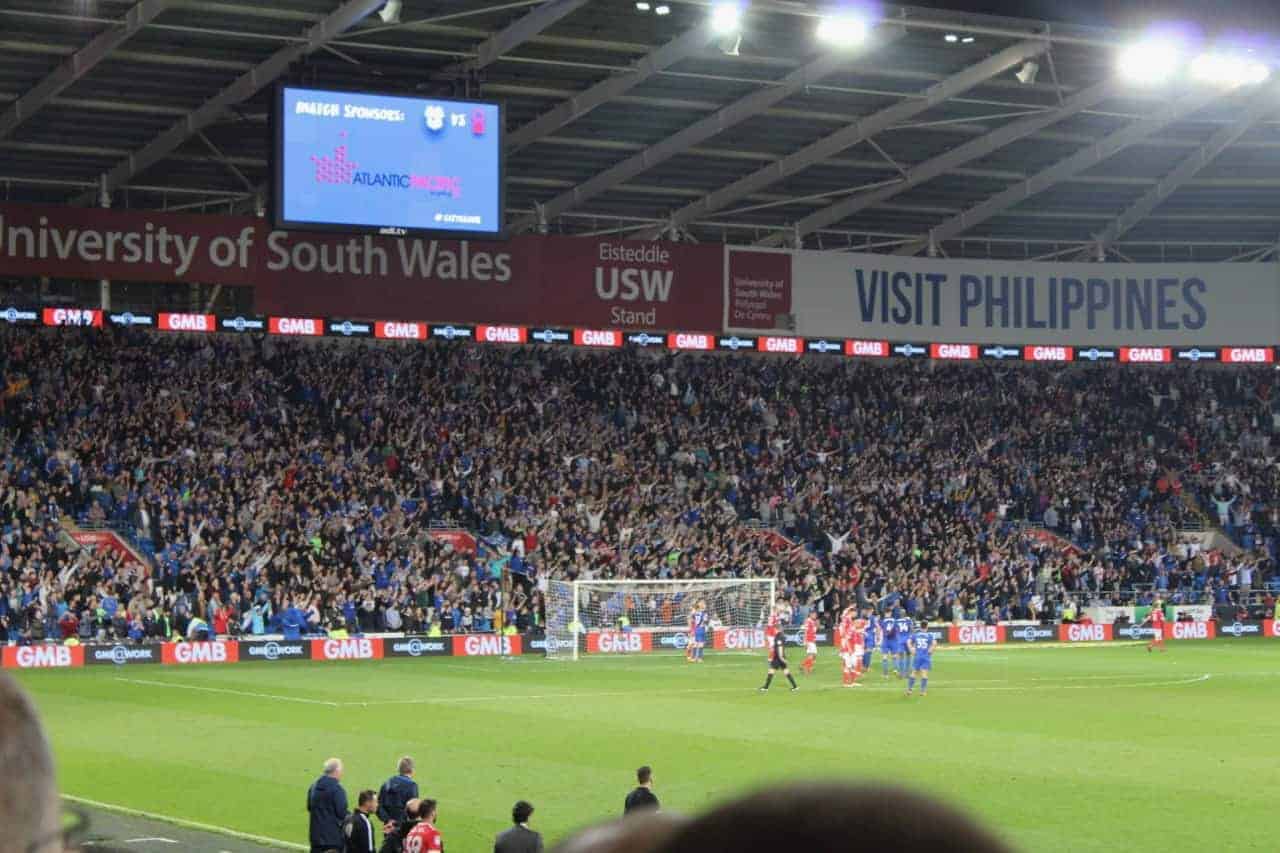 Let’s get to know Cardiff City FC, a South Wales club that plays in the English Football League. 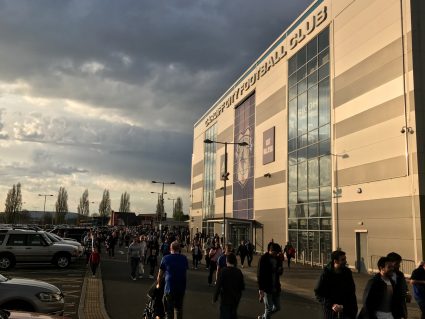 One of the most passionate fan bases in the country, a modern stadium, a truly insane rivalry, and all this set in a beautiful and historic city.

Cardiff, South Wales is about two hours west of London Paddington by train.

Cardiff City Women play in the Welsh Premier Women’s Football League, with games at the Cardiff International Sports Campus very near the stadium. But a bigger local team, Cardiff City Ladies, which used to be affiliated with the men’s club, is in the Women’s National League South at tier 3 of the English system. Their games are at the CCB Centre in a town with an incredibly Welsh name, Ystrad Mynach. 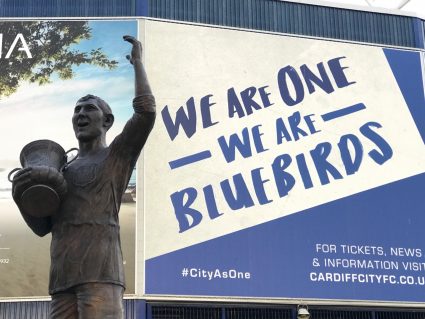 Cardiff City were founded in 1899 as a way to keep cricketers in shape during the winter, a common story among football clubs. They made the Football League in 1920 and had a good run there, making the First Division in 1921 and twice finishing runners-up in the league, once by a goal average of .024 per game. They played in two FA Cup Finals, winning it in 1927; a statue of that team’s captain, Fred Keenor, is outside the stadium.

They dropped quickly after that, nearly going out of the League in the 1930s, and they became essentially a lower-league team for decades. They spent a few unimpressive years in the First Division, but as recently as the 1990s they were down in the Fourth Division. Since they kept winning the Welsh Cup they qualified for various second-tier European Competitions; they made the semifinals of the Cup Winners Cup in the 1960s. Eventually forced to make a choice, they abandoned the Welsh Cup for the FA Cup in 1995.

It was in 2000 that another familiar theme came along: foreign investment. A Lebanese owner pumped in lots of money, got them to the second tier and into an FA Cup Final (they lost), but left them with terrible debt. He sold to a group from Malaysia, led by an apparently interesting character named Vincent Tan. He decided that after 114 years playing in blue, Cardiff City – the Bluebirds, remember – should play in red. He said this was to increase their international marketing appeal. The fans revolted, but Tan owns the club; it took three years and, he said, some advice from his mother to change them back to blue.

Cardiff made the Premier League in 2013, but they were relegated the next season. Starting in 2016, they rebuilt under manager Neil Warnock and finished second in the Championship in 2017–18, beating out Fulham for the automatic promotion spot by two points. They lasted one year in the Premier League (2018-2019) and the 2021-22 season marks their third straight in the Championship. 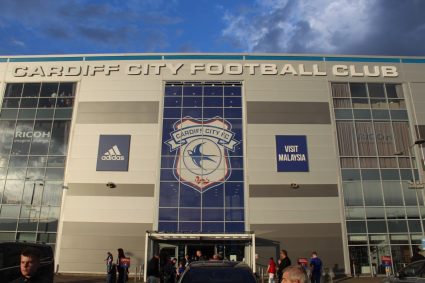 The club crest over the entrance to Cardiff City Stadium.

Cardiff aren’t fond of either of the Bristol clubs (that’s called the Severnside Derby for the local river) or nearby Newport County, but they rarely play the latter. However, the South Wales Derby with Swansea is one of the most intense rivalries around – and they are in the same league again!

There have been some notable events in this one. In 1988, Cardiff won away at Swansea and a group of their fans were chased into the sea after the game. In 1993, Swansea fans at Cardiff tore out and threw chairs at their hosts, who then invaded the pitch. This resulted in the derby being the first fixture in British history to have away fans banned for several years. All told, Cardiff have a slight advantage in wins (on the pitch!) in the series.

There’s one called “I’ll Be There” that’s an ode to the coal mining days; as near as I can tell, the only part they sing is “With my little pick and shovel, I’ll be there.” They sing “You Are My Cardiff” to “You Are my Sunshine.” They also have more than one about Swansea, including one about people there eating rats.

Here are a fun couple of videos to introduce you to singing Bluebirds:

By the way, this second one is filled with a classic sub-genre of football videos: blokes singing and bouncing in the concourse.

Eighth place finish in the Championship with 68 points, nine points from qualifying for the play-offs. 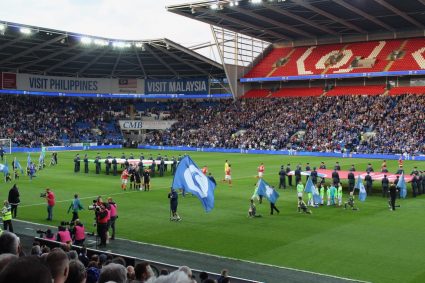 The teams come out before a Cardiff home game.

Cardiff City Stadium replaced Ninian Park as the club’s home in 2009. It holds 33,280 and is yet another example of a not-too-inspiring new stadium. However, Cardiff City fans can make a lot of noise, and even when Paul saw them play Nottingham Forest in the Championship last year, it was rocking pretty well.

You have to request one on the club website.

Tickets are pretty easy to get and run from £18 to £32. Even the home derby game didn’t sell out! Groundhopper Soccer Guides can help fans with Cardiff City tickets in the 206 & 207 blocks.

The closest train station is Ninian Park, which is five minutes away. Trains run there every half hour from Cardiff Central; it’s four minutes and £2 on a train bound for Radyr. You can also walk from Cardiff Central in about 25 minutes or take bus #95. After the game, the club runs a free coach to Cardiff Central; look for it in the circle near the statue of Fred Keenor, or just ask a steward. 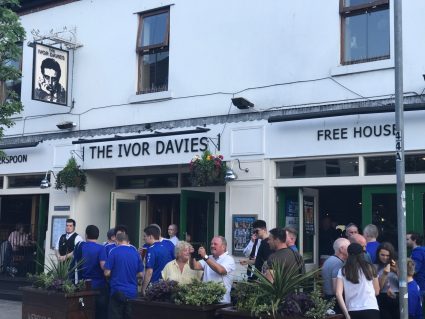 There is not much good out by the stadium, unless you are walking out from the center. In that case, look for the Ivor Davies and the Canton Cross Vaults, both along Cowbridge Road near Leckwith Road, which is where you turn south for the stadium. There is one uninteresting pub at the stadium, the Sand Martin, but they only serve drinks if you are sitting down and having a meal.

In town, there are some great options. I saw huge crowds of Bluebirds at the old-fashioned Queens Vaults, the more modern O’Neill’s, the Old Market Tavern, and in particular at The Borough. All those are right along the main drag.

Again, it’s all about eating in town. Check out some of the arcades (basically covered shopping streets) in town for good options, and pop into the 1891 Cardiff Market for, if nothing else, some traditional Welsh cakes. If you go out to the Bay (see below) there are more options out there. 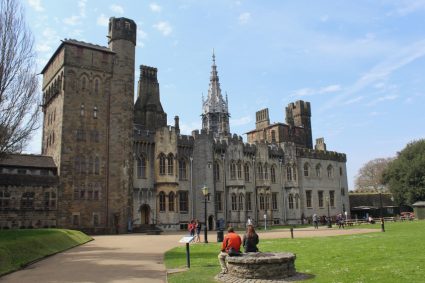 The Cardiff Castle is the main attraction in town, and just a few minutes’ walk from the station. It was built in the 11th century on Roman ruins, and in the 17th century it became the home of a series of Marquesses, which seems to be something like a Duke. There are self-guided tours of the grounds as well as guided tours of the home and clock tower.

The National Museum of Art is highly rated and includes the largest collection of Impressionist works outside of France. The Doctor Who Experience closed, if that means anything to you; they film the show here. The Cardiff Bay, once one of the great coal-exporting ports in the world, has been redeveloped with restaurants and bars; a boat tour out there is recommended and can be booked on the spot. And all of this is connected by the usual hop-on hop-off bus which you can pick up at the castle.

Also, check online for specialty tours to book ahead, like Cardifferent Historic Pub Tours, a Castle Connoisseur Tour, and various food tours. Check as well to see if Street Food Circus is on. It moves around the city during nice weather.