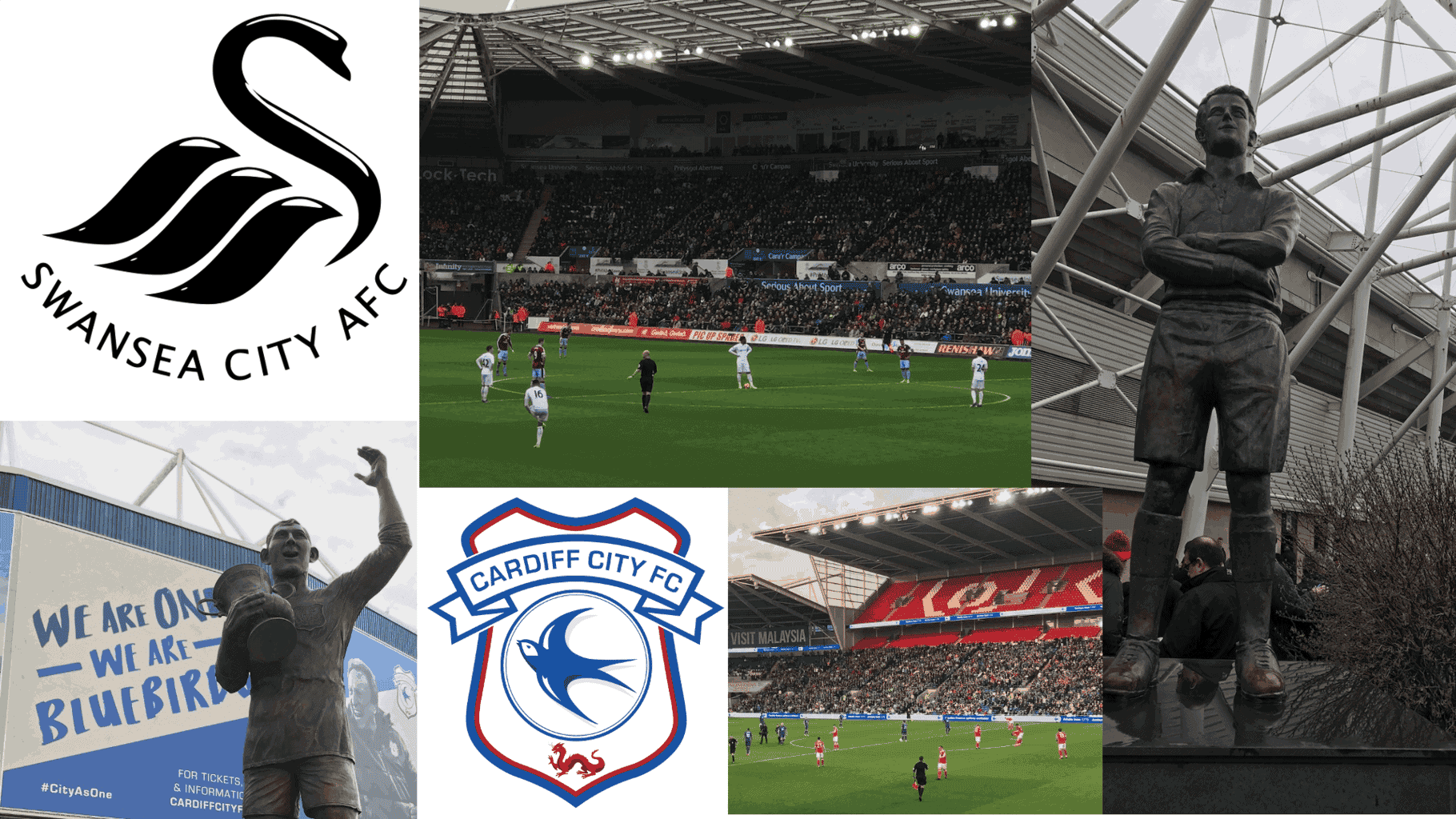 Get to Know the South Wales Derby, Cardiff City vs Swansea City

Some derbies are really just very simple: two big clubs in one area, with no other real competition for supporters’ affections. Such is the case with the South Wales Derby, Swansea City vs Cardiff City.

There are other teams in Wales that choose to play in the English leagues rather than the much smaller Welsh leagues. But neither Newport County nor Wrexham generate much support, and they are currently in League Two and the National League, respectively. So in South Wales, for fairly big-time football, it’s the Swans and the Bluebirds, both currently in the second-tier Championship.

But why do they play in the English league, as opposed to the Welsh league? Well, when these clubs formed, there was no Welsh league. For historical and cultural reasons this American doesn’t really grasp, there’s a much stronger sense of independence from England up in Scotland than down in Wales. Later, when Wales did create its own league, UEFA said their champions couldn’t qualify for European competition, so for the same reason as so many things are decided — money — the teams in the South Wales Derby, along with many other Welsh clubs, battle it out in the English leagues.

So, as we always do when learning about the top English football derbies, let’s start with a history of each club involved, adapted from our guidebook, The Groundhopper Guide to Soccer in England. 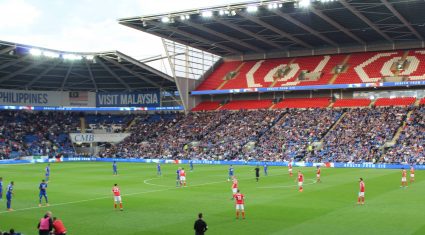 Cardiff City was founded in 1899 as a way to keep cricketers in shape during the winter, a common story among football clubs. They made the Football League in 1920 and had a good run there, making the First Division in 1921 and twice finishing runner-up in the league, once by a goal average of .024 per game. They played in two FA Cup finals, winning it in 1927; a statue of that team’s captain, Fred Keenor, is outside the stadium.

They dropped quickly after that, nearly going out of the league in the 1930s, and they became essentially a lower-league team for decades. They spent a few unimpressive years in the First Division, but as recently as the 1990s they were down in the Fourth Division. Since they kept winning the Welsh Cup, they qualified for various second-tier European competitions, and they made the semifinals of the UEFA Cup Winners’ Cup in the 1960s. Eventually forced to make a choice, they abandoned the Welsh Cup for the FA Cup in 1995.

It was in 2000 that another familiar theme came along: foreign investment. A Lebanese owner pumped in lots of money, got Cardiff City to the second tier and into an FA Cup final (they lost), but left them with terrible debt. He sold to a group from Malaysia led by an apparently interesting character named Vincent Tan. Tan decided that after 114 years playing in blue, Cardiff City — the Bluebirds, remember — should play in red. He said this was to increase their international marketing appeal. The fans revolted, but Tan owns the club. It took three years and, he said, some advice from his mother to change them back to blue.

Cardiff made the Premier League in 2013, but they were relegated the next season. Starting in 2016, they rebuilt under manager Neil Warnock and finished second in the Championship in 2017–18, beating out Fulham for the automatic promotion spot by two points. They lasted one year in the Premier League (2018-2019) and the 2021-22 season marks their third straight in the Championship. 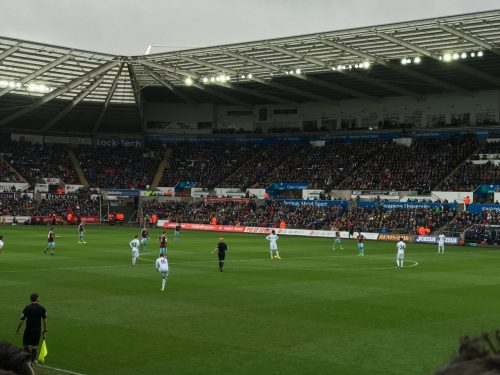 Swansea Town was founded in 1912 and changed their name to City in 1969. They bounced around among the lower leagues for sixty-plus years before catching fire in the late 1970s with three promotions in four seasons. This put them in the top tier for the first time in 1981, when they finished sixth — still their highest finish. Incredibly, they turned right around with two straight relegations and went bankrupt in 1985!

By 2001 they were in League Two, the lowest level of the Football League. Their finances were disastrous, managers were coming and going, and an Australian group of owners bought the club and got rid of all the best players. Dark times. They avoided relegation out of the league only by winning on the last day of the season in 2003.

The short version of what happened then is that the supporters — ordinary citizens of Swansea, the ones who live and die with the club — rallied to the cause and purchased a 20 percent share of the team. Incredibly, in 2011, they found themselves in the Championship playoff final at Wembley — which they won, 4–2, over Reading. From the brink of extinction to the Premier League in ten years!

A wonderful film was made about this called Jack to a King. (Jack is a local nickname that comes from the Welsh word for “seamen” as well as a legendary dog named Swansea Jack who saved twenty-seven people from drowning in the 1930s. There’s a monument to him in town.)

The Swans were a midtable Premier League team for the next five years, and they won the League Cup in 2013. But the energy started running out in the 2016–17 season, when they slipped to fifteenth, and in 2017–18 the dream ended, for now, with relegation to the Championship where they have been since. They came close to promotion back to the Premier League following the 2020-21 season, losing in the playoff final to Brentford at Wembley, 0-2.

History of the South Wales Derby

The first-ever Swansea (then Town) game was a 1-1 draw with Cardiff City. But they were usually in different leagues and only played eight times until 1949, when a derby-record crowd of 57,000 saw a 1-0 Cardiff win at their old Ninian Park. The derby mostly vanished again until the 1980s, by which time the hooligan problem was intense — particularly so at South Wales derbies.

It was so bad that in the 1990s away fans were banned from Swansea-Cardiff games for four seasons. We’ll get to why, exactly, below. 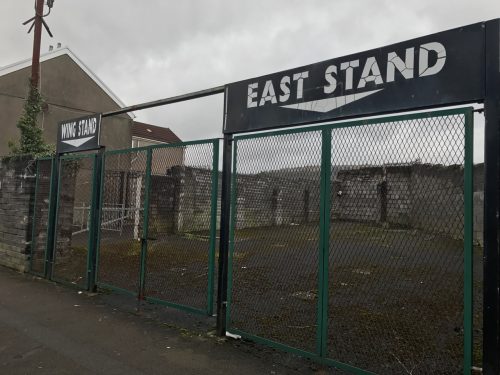 Entrance to the former Vetch Field in Swansea.

We can basically skip a bunch of decades here, as (A) the teams didn’t play much until the 1950s, and (B) until the 1960s it was more of a friendly derby. Some folks even supported both clubs, and fans occasionally stood side-by-side on the terraces. But life changed, a 1960 game had some crowd trouble, and then it all kicked off at the 1969 Welsh Cup Final.

Cardiff won the first leg, 3-1, at Swansea’s old Vetch Field (which you can still kind of visit, by the way). But afterwards, Cardiff fans trashed a train, breaking windows and lamps, throwing things onto the track, pulling the emergency stop cord, and having to be cleared by police and dogs.

In the return legs, Cardiff added a 2-0 home win for a 5-1 aggregate stomping, after which some of their supporters attacked a train filled with Swansea fans, according to one report “… throwing anything they could get their hands on from bricks to milk bottles from front door steps.”

The South Wales Derby reached another level of animosity when the scorer of five Cardiff goals in that final, John Toshack, was hired some 10 years later to manage … Swansea City.

South Wales Derby in The 1980s

In 1980, in the first league game between the two for 15 years, Toschack scored as player-manager in a 2-1 win. The other goal was from David Giles, also formerly of Cardiff. In 1988 Cardiff won away at Swansea, but a group of their fans were famously chased into the sea by a larger group of Swansea fans. To “honor” this moment, Swansea fans sing “Swim Away” at Cardiff fans, and occasionally you’ll see a Swansea player perform — and get punished for — a “swimming motion” goal celebration.

December 1993: The Battle of Ninian Park

Normally, football supporters in the UK — and most especially at derbies — are kept at a large distance from one another, like in different stands. And in 1991, when 39 supporters were arrested at a Welsh Cup game, you’d think the authorities would take note. But for some reason, for a 1993 league game, they were put in the same stand!

Kickoff was delayed by trouble, which raised tension, and when the first goal went in, all hell broke loose. It’s unclear which happened first, Cardiff fans invading the pitch or Swansea fans ripping out and throwing seats, but it was a mess. And for the next four years, there were no away fans at the South Wales Derby — the first British fixture to suffer this fate.

After the teams were in different leagues for a while, they hooked up again in 2008, but the hatred had not subsided. In that first season both games saw crowd trouble, arrests, and even a referee injured by a coin thrown from the pitch. Cardiff fans trashed the away end of Swansea’s stadium on their first two trips back, and Swansea fans had to be dispersed while waiting for them to exit.

It wasn’t all crowd trouble, though. The last derby at Ninian Park, in 2009, was a cracker:

And the following season saw a classic 3-2 Swansea win at home. There doesn’t seem to be a full package of highlights for some reason, but here’s the winner:

South Wales Derby in the 2010s

Since that classic, they have played only nine South Wales derbies, most of them low-scoring and with relatively few crowd problems. The last four, since the teams met up in the Championship for the 2019-20 season, have ended 1-0, 0-0, 2-0 and 1-0.