Who is this Wrexham AFC that Ryan Reynolds and Rob McElhenney Just Bought?

There has been a ton of media about actors Ryan Reynolds and Rob McElhenney buying Wrexham AFC, a Welsh soccer club that plays in the English football league system. I will leave the coverage of the actors to others, but I want to answer this question: Who is Wrexham AFC? 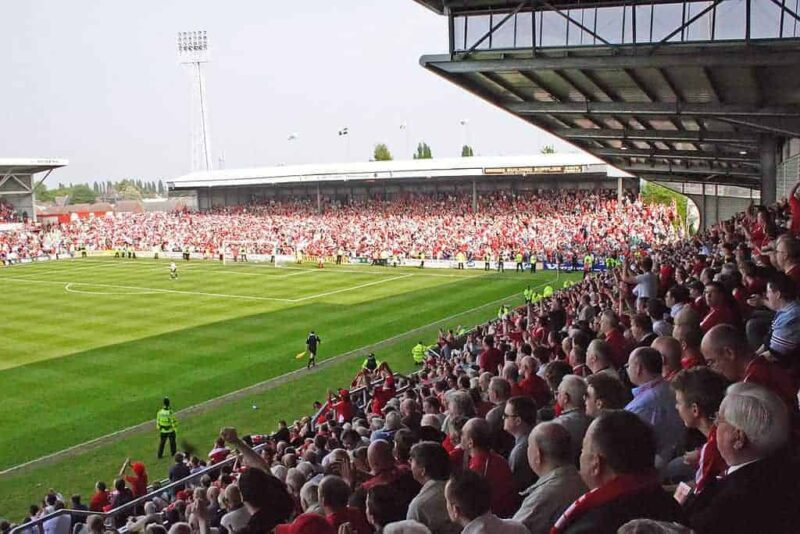 The Mold Road Stand and Kop at Wrexham FC (by Mark Barnes on Wikipedia).

First up, the AFC stands for Association Football Club, with “association” being the source of the word soccer. And full disclosure: Although I have been to more than 100 games at 60+ grounds around the UK, I have not yet been to a game at Wrexham. Still, I can give you an idea of who they are.

Also, full disclosure: Having not been there, I grabbed all these photos from Wikipedia. 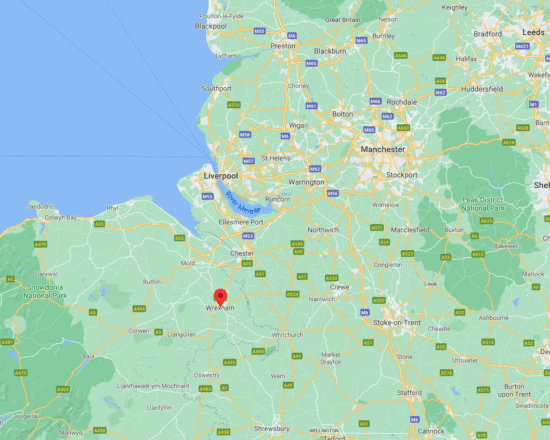 Wrexham is between Manchester, Liverpool, and Snowdonia NP.

The club is in Wrexham (pronounced REX-um), a town of about 65,000 in North Wales. Although it’s in North Wales, it’s only 50 miles from Manchester and 35 miles from Liverpool, so as a groundhopping destination it’s pretty convenient. It’s also just 40 miles from the gorgeous Snowdonia National Park.

In a mysterious (to me, anyway) bit of British culture, Wrexham is actually called a “large market town”; just please don’t ask me what that means. Anyway, it’s the fourth biggest, um, settlement in Wales, and the biggest in North Wales. Historically its main industry was coal mining, and in fact a local colliery — that’s what they call a coal mine — was the scene of one of Britain’s worst mining disasters when 266 miners died in an explosion and underground fire in 1934.

Local sites include a medieval town center (or centre) in which the main attraction is St. Giles’ Church and its 136-foot high 16th-century tower. Other landmarks include the 1904 Talbot Hotel (below) and the Horse and Jockey Public House, a 16th-century pub with a thatched roof. 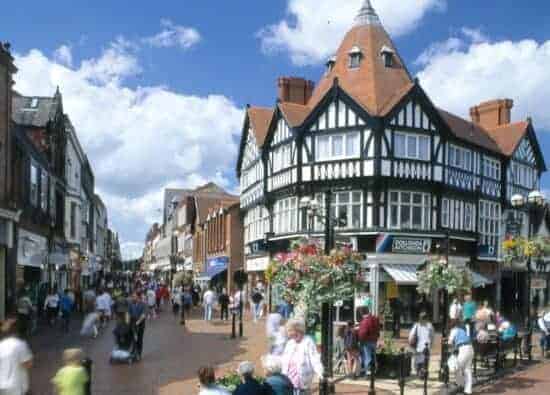 The 1904 Talbot Hotel in Wrexham (via Born Acorn on Wikipedia).

Check that map, by the way, and be glad Reynolds and McElhenney didn’t buy a club in, say, Llanfihangel Glyn Myfyr. How do you even say that? 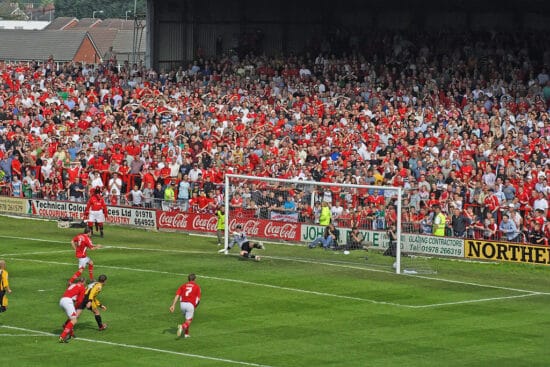 Scoring a goal in front of The Kop at the Racecourse Ground (Mark Barnes on Wikipedia).

Wrexham is one of the oldest professional clubs around, having been formed in 1864. Like other Welsh clubs — Cardiff City and Swansea City being the most prominent — they eventually joined the English Football League in 1921.

Probably their most famous victory was knocking Arsenal, the defending champs (“holders”) at the time, out of the FA Cup in 1992. They also played in a European competition called the Cup Winners’ Cup (sort of an early Europa League) in 1984 and beat FC Porto, 1-0.

They have won 23 Welsh Cups and a couple of minor English cups, most recently the FA Trophy for semi-pro teams in 2013. But they ran into financial problems in the early 2000s and went into bankruptcy (“administration”), then were relegated from the Football League in 2008. They have been in the National League, fifth tier of the pyramid of leagues, ever since.

For me, the most interesting thing about Wrexham is that before McElhenney and Reynolds came along, the club was owned by the supporters. When the financial problems came and debt mounted, a trust was formed and took over the club in 2011.

The Wrexham-Chester rivalry is known as the Cross-Border Derby because, while Chester is only 10 miles away, it is in England. That proximity, plus a wee bit of Welsh-English animosity, makes this one of the nation’s most fierce derbies.

Because they have been in different leagues, they haven’t played since 2017. Chester are currently a league below in the National League North, so let’s hope they get their act together and/or a cup draw comes up lucky. Also, one of the promises made by the new Wrexham owners was to “always beat Chester*.” (The asterisk leads to this comment: “If we ever play Chester again.”)

Other rivals include local neighbors Shrewsbury Town and Tranmere Rovers, so if you’re going to Wrexham, circle one of those games on the fixtures list. 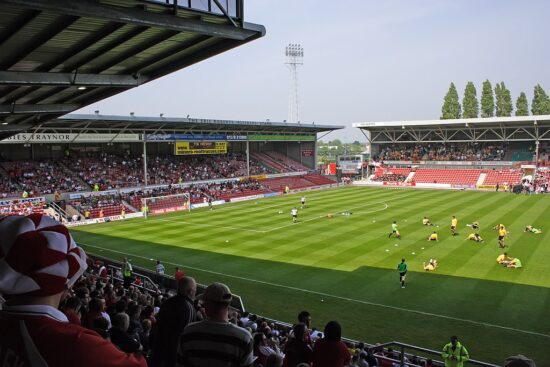 The Racecourse Ground at Wrexham AFC (via Mark Barnes on Wikipedia).

Finally, let’s look at their home, the Racecourse Ground, recognized as the world’s oldest international football stadium that still hosts international matches. Its first was a Welsh international in 1877, the latest in 2019, although to say that the current stadium is not exactly the same place as in 1877 would be a wild understatement.

Wrexham has played on this spot since their founding in 1864. By the way, that founding took place at the Turf Hotel, a pub which still exists and where you should definitely have your pregame pint.

The Racecourse Ground holds 10,771 people, with 5,000 of them in all-standing on the 1952 Kop beyond one goal. The most recent stand was built in 1999, so the whole place should have a nice old-fashioned feel to it.

Personally, I don’t care who owns Wrexham, though I wish them well. The actors seem like good guys, and it’s a club filled with history that plays in a nice-looking ground.

So as soon as we can all go groundhopping again, I’m headed for Wrexham!