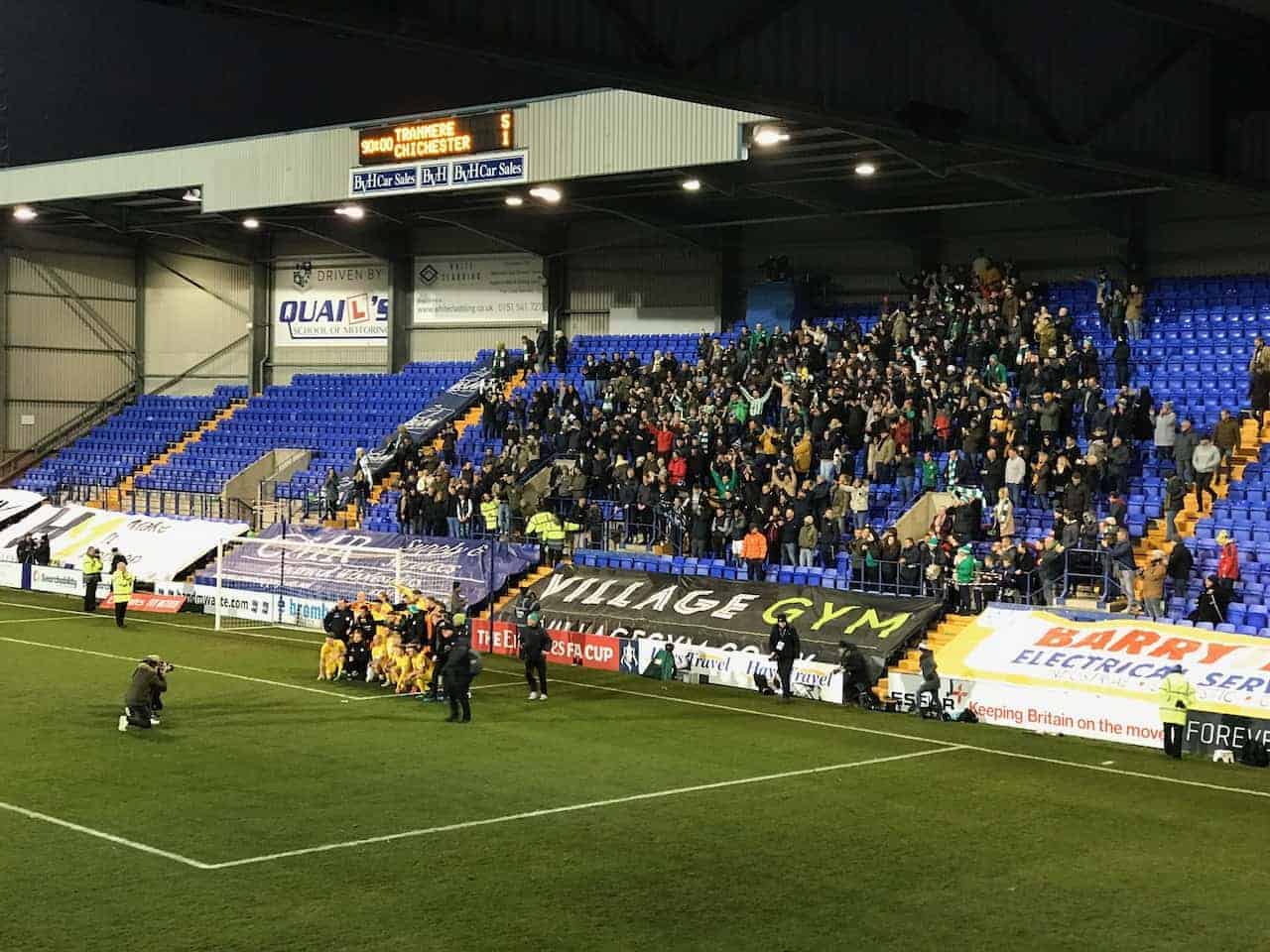 Chichester City at Tranmere Rovers in the FA Cup: What It’s All About

I go all over England, seeing the games, meeting the people, checking out the towns, looking for … something.

Sure, I’m adding clubs to my list, researching places for my book, trying out my hospitality packages — running the business — and hoping to catch a good game along the way.

But there’s something bigger, and something deeper. Glory? That’s on the pitch. On the high end, we seek connection. Lower, to make some noise. Personally, I’m just a gatherer of experiences and teller of stories, so of course I bounce around the country seeking new places and meeting new people. And I love helping other people do the same.

I have seen, usually without warning, complete duds, instant classics, character-filled grounds, sterile rectangles, mass explosions of joy and supporters cursing their own. And then, occasionally, something magical like Chichester City pops onto my radar.

Even as I write this, I don’t really know where Chichester is. Somewhere south, I think. All I know is that in October I heard that a team from the eighth tier had made the First Round of the FA Cup, then got a bye to the Second Round because Bury FC went out of business, and would be playing at Tranmere Rovers of League One. I knew without a shadow of a doubt I was going to see that. 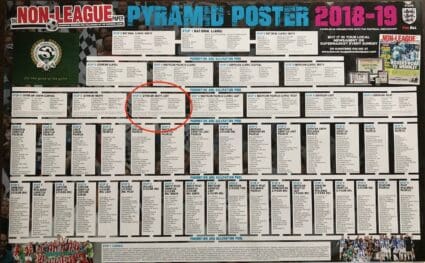 The pyramid of non-league football leagues in England, with Chichester’s league circled. Remember, the Premier League and Football League are above this.

Tranmere being a club I had yet to visit was a nice bonus, but let’s back up a minute. I will assume you’re not English — and if you are, just hang in here for a paragraph — so I will tell you that if the English leagues are one giant ranking system, and they kind of are, then Liverpool is currently number 1, Tranmere Rovers number 65 (in the third tier), and Chichester City number 167. None of their players are paid.

The FA Cup, meanwhile, is a tournament for pretty much everybody, without a bracket or seedings, with several qualifying rounds before the First Round Proper. For somebody from down at Chichester’s level to make it that far is really something. They drew Bury in the First Round, but Bury had already gone out of business, so Chichester were into the Second Round.

It’s hard to put into perspective, for the average American, a team playing a meaningful game 102 places up the rankings. In college football that’s a 1-AA school like Marist getting a playoff game at Miami. Chichester are in the Isthmian League South East Division, in the fourth tier of non-league football — the eighth tier over all. In fact, last year they were a league below that, in the Southern Combination Football League, which they won to earn promotion.

Maybe Butler making the Final Four is a better example. The point is, just about every football fan in England knew that Chichester City were playing at Tranmere, that it was on national television, that the money they’d bring in would sustain the club for years, and that it would be the biggest day in the club’s history.

And, of course, that they had almost no chance to win. Even one of their players in this great video described his plans for the weekend as “try not to have too many beers on Friday and try not to concede 10 goals on Saturday.”

As that video states, Chichester had already won six games before getting that draw. Starting in the Extra Preliminary Round in August, they beat Enrith Town, Bridon Ropes, Chalfont St. Peter, Hartley Wintney (that one took a replay), Enfield Town, and Bowers and Pitsea. The biggest attendance at any of those games was 531.

And here they were, in the Second Round Proper. Of course I had to see this! 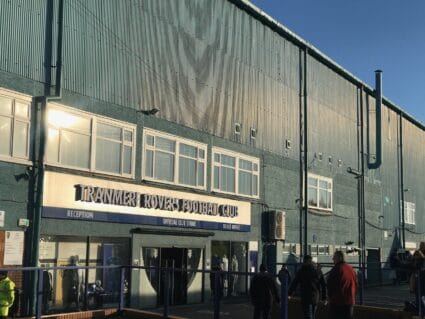 Tranmere Rovers are just west of Liverpool in a place called Birkenhead, so I should have gone old-school and taken the ferry across the River Mersey. For some reason this didn’t occur to me, but I did get a nice view from across the way, before ducking into a cool little pub near the shoreline called Gallagher’s. Then I took a bus over to the ground, because hey, I’m here to taste the local life.

Prenton Park is a lovely little ground tucked into a neighborhood, with a convenient pub right door — a pub which was mobbed with Chichester City fans plus a couple of TV crews wandering about. They were being serenaded by the fans, and not always in broadcast-able language.

Inside, it was immediately clear to me the different perspectives the two fanbases had on the day. For Tranmere it was a winnable FA Cup tie that promised something bigger in the next round — but they better win or risk national humiliation. For Chichester, though, it was from the off a green-clad party in the away end. We may get trampled, they clearly felt, but we will enjoy our day and be heard.

Here is the pregame scene — and yes, that is the theme from “The Rockford Files.” I have no idea why they play that.

The Chichester players, amateurs the lot of them, came out to give all they had, and they honestly should have scored first. A free header less than 10 yards out went just past the post, and for a moment we all thought, “Hang on, they’re here to play.” 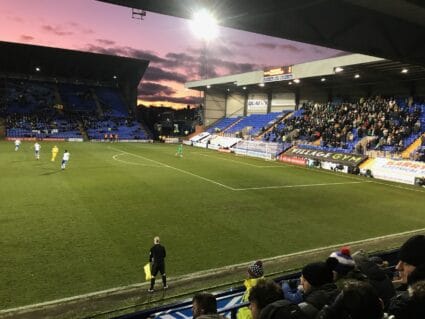 That woke up Tranmere, who began to press in earnest and make their advantage in skills pay. But the visitors held strong, encouraged by a constant din from the away end, and made halftime at 0-0. Another level of history attained!

Eventually, of course, the legs and minds got tired. Two bad defensive lapses led to Tranmere goals, the floodgates opened, and in the blink of an eye it was 4-0. And then 5-0.

And then a new vibe settled in: Hey, it was a great run, we’ve all had fun here. But I wonder if they can score.

If anything, the desperation in the Chichester end began to build. Our time here is almost done! We must revel, we must leave nothing in our lungs, and we must score! Honestly, not all their cheering was sublime: There were a couple of rounds of “Dirty northern bastards” and “Your support is shit.” But hey, it’s football.

It went into injury time. And then …

Sorry I didn’t capture the ball going in — but I got the important part. And they got their goal, one they’ll talk about for years I imagine.
It ended, 5-1. Tranmere were relieved, Chichester ecstatic. Their players went over to share the moment with their supporters, and even many of the Tranmere supporters clapped them off. I was sure that many of those players were recognizing friends and family in the stands.

(Also, I love the guy clapping with his crutches!)

Then they took a team photo:

But this isn’t about what happened in the game. It’s about the game. About who played in it, and what it meant to them. Tranmere went on to beat Watford after a home replay and then draw Manchester United at home; they were pounded out of the Cup that night.

And Chichester? As I write this, they are 7th in Isthmian South East Division, between Whyteleaf and Guernsey. But as I walked out of Prenton Park that night, they were still back in the away end, singing and bouncing and clapping and having a disco. They would not be denied their occasion, never mind giving up five goals.

They got there, they were heard, they got their goal. That’s what it’s all about.

My Photos From the Day: