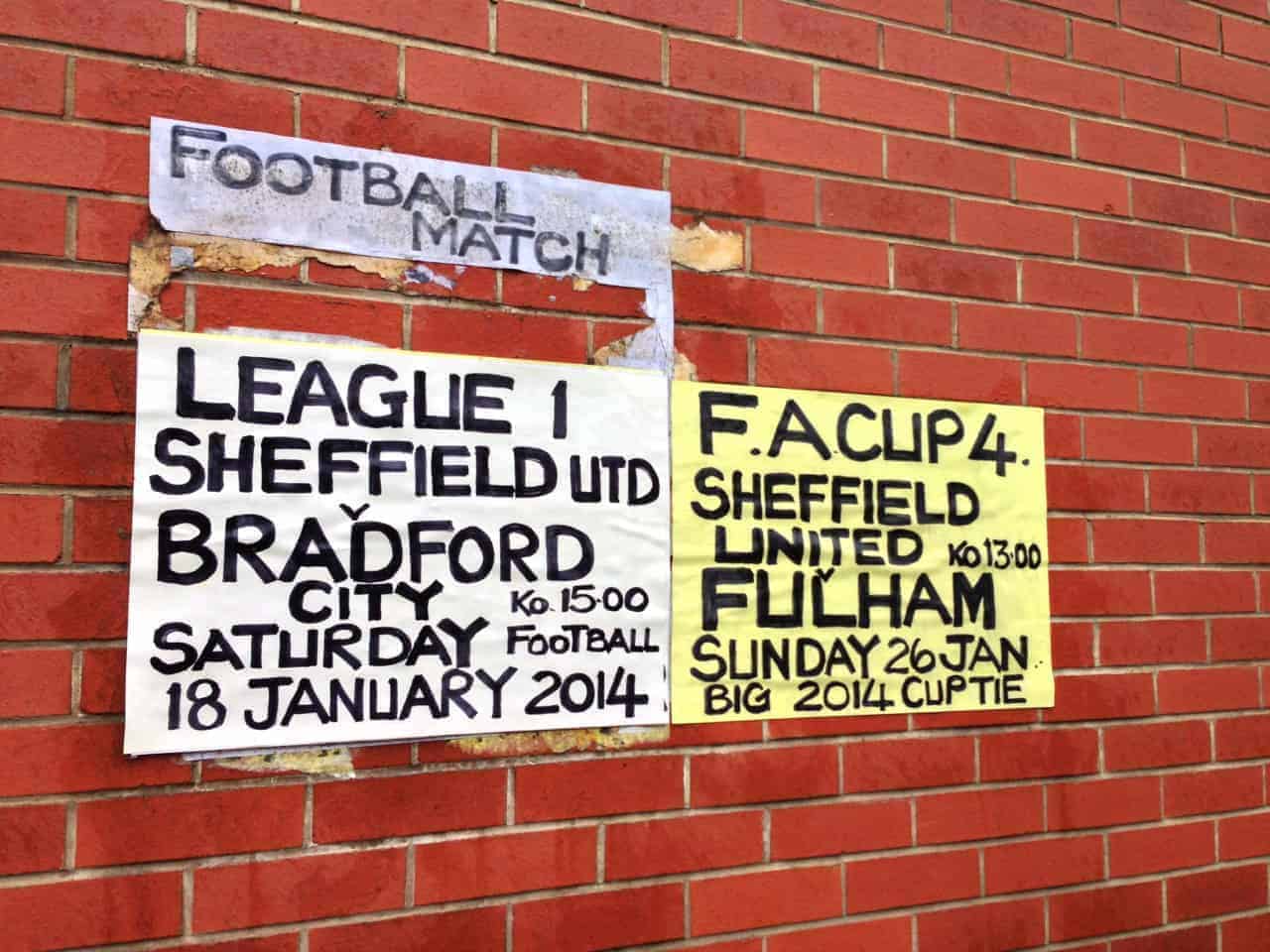 As Americans fall more in love with soccer, particularly English soccer, we can sometimes get confused by all the different leagues and competitions. So let us explain one of our favorites, the FA Cup. 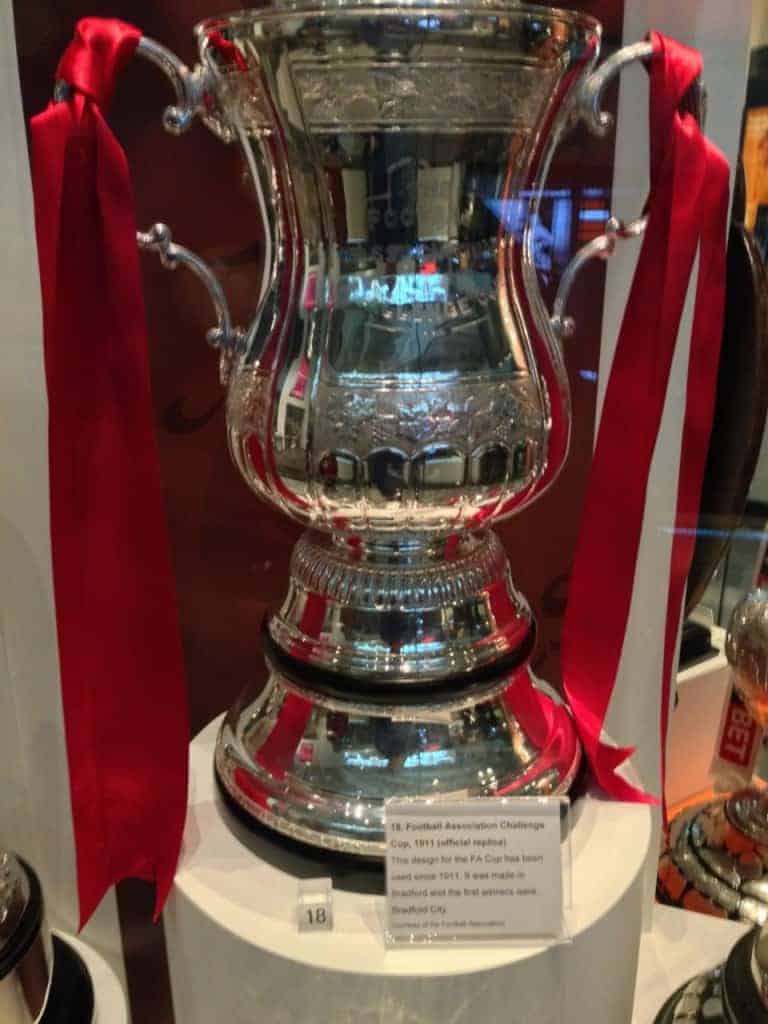 A replica of the FA Cup.

In the U.S., there are just the leagues: the NFL, NBA, NHL, or Major League Baseball. They play, there’s a playoff leading to a champion, and we all go home.

But in England, we keep running into cups and trophies and entire other leagues that play in Europe but involve English teams. We have covered all this in our Guide to the Leagues and Cups of English Football, but in this post we want to talk a little more about the biggest (and our favorite) of these not-the-league competitions, the FA Cup.

First of all, the FA is the Football Association, the sport’s governing body in England. Note that the word Association is where the word soccer originates from.

The FA Cup is simply a tournament for pretty much every soccer team in England. And we don’t just mean the 92 fully professional clubs, though that’s a lot. We’re talking more than 700 clubs, right on down to the local police union hall, or pretty much anywhere 11 blokes gather with a ball. The Cup, which runs from August to May, is a non-seeded, no-bracket tournament that sorts through all of these clubs in a fully democratic way, then crowns the champion on the closest thing England has to our Super Bowl Sunday.

How Does the FA Cup Work?

We’re going to simplify a bit here, but the tournament starts with several qualifying rounds. In the first of these, dozens of clubs are tossed into a basket, with the first one drawn out being the home team and the second the visitors. In these rounds, they keep it regional, since the union hall doesn’t exactly have a travel budget. Everybody plays, draws are settled by replays at the other teams’ stadium, then all the winners go back into the pot for the next round. And, by the way, each round gives the winners an ever-larger cash prize, so some of these tiny clubs can make their whole budget, or get serious work done on their stadium, by winning a few games.

This goes on for four qualifying rounds (actually more, because they have Extra Preliminary Qualifying Rounds) which lead up to the First Round Proper, an exquisitely English name; this occurs in the first weekend of November. It is here that the professional clubs from League One and League Two, those being the third and fourth tiers of the big leagues, go into the pot.

Groundhopper Paul saw Fulham (then Premier League) play at Sheffield United (then League One) in the FA Cup.

The Magic of the FA Cup

Here is where we start to see what is known as “the magic of the Cup,” because at this point we still have fully amateur clubs, where the players have regular jobs, and the stadiums, if they exist, hold a couple thousand people, often without seats. And since the whole thing is unseeded and has no bracket, these teams will then host, or travel to, fully professional clubs which, if you’re paying attention to the game beyond the Premier League, you may recognize the names of.

For example, in 2019, Paul caught a  Second Round Proper game in which Chichester City, from a team in the eight tier of the pyramid (Isthmian League South East Division), played at Tranmere Rovers, then in League One, the third tier. As he wrote in his report from the game, “In college football that’s a 1-AA school like Marist getting a playoff game at Miami.”

You Can Watch it on ESPN+:

Watch the English FA Cup on ESPN+ in the USA

Tranmere won the game, 5-1, but the Chichester fans stuck around well after the game, singing and celebrating with their players, and you can be sure whoever scored that goal won’t be buying any beers in town for a long, long time. Also, the financial benefits for a “minnow” club like Chichester City, who by rule get close to 40% of the gate receipts for the game at Tranmere, will sustain that club for years.

Here are their fans going nuts after the game, with the team snapping a photo in front of them:

Other Reasons to Love the FA Cup

And here is where we see how some of the Cup’s magic has been diminished over the years. There is now so much money in the Premier League and the European Competitions that, if a team is struggling to get into Europe or stay in the Premier League, they will consider the FA Cup a distraction and probably play a bunch of reserves in it. So there are lots of different motivations here: the tiny clubs seeking glory and a paycheck, the bigger clubs not wanting a replay but also resting starters, and the neutrals just hoping they get to see a giant killed — even if it’s a giant that “played the kids.”

Still, depending on the draw and results, some “minnow” could make it all the way through to the Third Round Proper, in early January, when the Championship and Premier League teams come into the FA Cup. It’s at this point where, every year, somebody like Manchester United has to go play at Gateshead, or Oxford United travels to Newcastle, or — in another form of excitement — two big teams that really hate each other, like Arsenal and Tottenham, might happen to get drawn together. Sometimes, this is two teams in different leagues who never play, such as Bristol City of the Championship and Bristol Rovers of League One. Or perhaps like Nottingham Forest having to play nearby Notts County for the first time in years.

In that case, another quirk of the FA Cup adds to the excitement: Normally, the visiting team is only given about 5% of the tickets to a league game, or at the most 3,000 seats. But in the Cup that number goes up considerably. So we have the spectacle of 10,000 Cambridge United fans at Old Trafford, or an entire end of Chelsea’s Stamford Bridge being filled with Scunthorpe partisans. It’s also fun to see throngs of Everton fans packed into temporary bleachers at Stevenage FC.

Or, like Paul did in 2018, you might catch a bonus Merseyside Derby — Liverpool vs Everton in the First Round and get to see 9,000 Everton fans at Anfield:

That is one of the most special moments we’ve seen in all our English soccer travels, and in many ways, it could only happen in the FA Cup.

Later Rounds of the FA Cup

Starting with the Third Round Proper, the “big boys” of English football slowly take over, so it’s quite rare that anyone outside the Premier League even makes the semifinals. The last team from outside the top tier to win the FA Cup was West Ham United, in 1980.

The semifinals and Final are held at Wembley Stadium every year, a change from years ago when semifinals used to be played at neutral venues around the country. But the construction of the new Wembley, which opened in 2007, cost so much money that the FA, which owns it, moved the semis there the same year. The Final has been played at Wembley every year since 1923, except for a few years when it was in Cardiff, Wales, while the new Wembley was being built.

Arsenal hold the record for the most FA Cup wins with 14; Manchester United are second with 12.

There has been a Women’s FA Cup every year since 1970, though under a few different names, and it runs the same as the men’s tournament. Arsenal lead that one, as well, with 14 wins!

There are also an FA Youth Cup (for players aged 15 to 18 and dominated by Premier League youth squads), an FA Sunday Cup for Sunday League clubs, an FA County Youth Cup for young players who haven’t signed a pro contract, an FA Futsal Cup, and, since 2015, an FA People’s Cup with multiple sub-competitions like age groups, disabilities, etc.