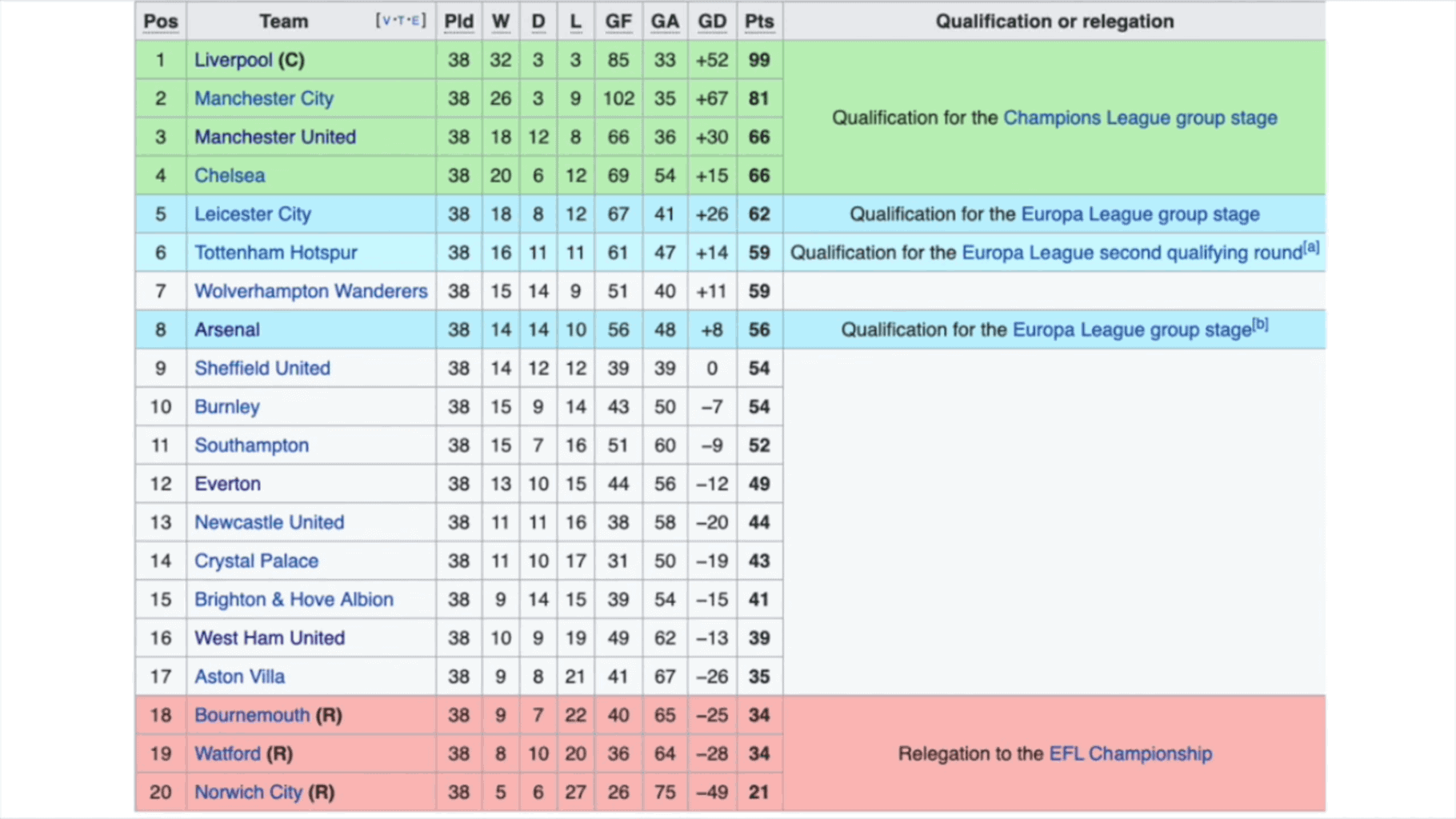 How Does Promotion and Relegation Work in English Soccer?

The system of promotion and relegation in English soccer is something Americans find confusing, since it doesn’t exist in our sporting culture. But I think it’s one of the many reasons to love watching soccer in England, so here is a little more about how it works.

Before I explain what that even means, let’s use a simple analogy that will work for the American sports fan. Imagine that every baseball team in America is an independent outfit. So the Memphis Redbirds wouldn’t be associated in any way with the St. Louis Cardinals, and all their players would be contracted to Memphis, not “the parent club.”

Next, imagine that within every division, from the major leagues to short-season rookie leagues, the way they determine a champion is to have one “table” (standings), have every team play all the other teams home and away, then see who has the best record. Then, and this is where things get interesting, the bottom three teams from each division have to go, for the whole next season, to the next division down. Likewise, the top three teams in each division would go up a division for the next year.

That is promotion and relegation.

Here is why this is so great: It creates a whole new league within the league. For example, in the single-standings example above, the Royals and Giants and Yankees might be battling it out for the title, but down at the bottom of the standings is an equally intense battle to just stay in the majors. Imagine the financial loss from dropping down to AAA! Likewise, imagine the financial gain from getting into the top league. Between the TV money, ticket sales, and merchandise, we are talking tens of millions of dollars.

The English Soccer “Pyramid” of Leagues

English soccer — and, really, soccer everywhere but the US — is set up as a pyramid of leagues. At the top is the Premier League. The next three levels down are collectively called the English Football League, including the Championship, League One, and League Two. Between these four levels there are 92 professional teams in England. Below that are two levels called the National League. And below that you get into regional leagues, and there are well over 800 clubs! (If you want to go deep into this, read my Guide to the Leagues and Cups of English Soccer.)

How Promotion and Relegation Work in English Soccer

All leagues below the Premier League give automatic promotion to the top two teams, then throw #3 through #6 into a seeded playoff, with the final at Wembley Stadium. The Championship playoff, for example — with the winner becoming the third team promoted to the Premier League — is said to be worth some £170 million to the winner. That would be around $240 million. That — along with playing Liverpool next year instead of Barnsley — is why you see such a range of emotions when Queens Park Rangers beat Derby County with a late goal a few years back:

Listen to that crowd when the ball goes in! That got them into the Premier League, and Derby County haven’t made it there yet. And then the next year QPR went back down, as well, and haven’t gotten back up. Such is sport.

Here is much more on the English soccer promotion playoffs.

“Rising Through the Leagues”

In theory, you could start a team right now with you and 10 friends, and then play your way to the Premier League. Imagine a baseball team in Topeka, Kansas, playing their way to the majors and getting to host the Giants for a weekend series!

In the Premier League recently, there have been two such stories:

AFC Bournemouth, a club with about 11,000 seats in a resort town on the south coast, had a game in 2009 which, had they lost, would have bounced them clear down into the National League — basically into non-professional status. They won, 2-1, with a late goal that is still legendary. And then, an amazing six years later, they had gotten all the way to the Premier League. They lasted there until 2020, when they were relegated to the second tier.

In Bournemouth, you can see Championship League football with about 11,000 other people.

The 2015-16 Premier League champions, Leicester City, had never won a top-flight title, and in 2009 they were in League One — basically AA. At the end of the 2014-15 season, they had to win about seven games in a row to avoid relegation from the Premier League … and the next year they won it all! 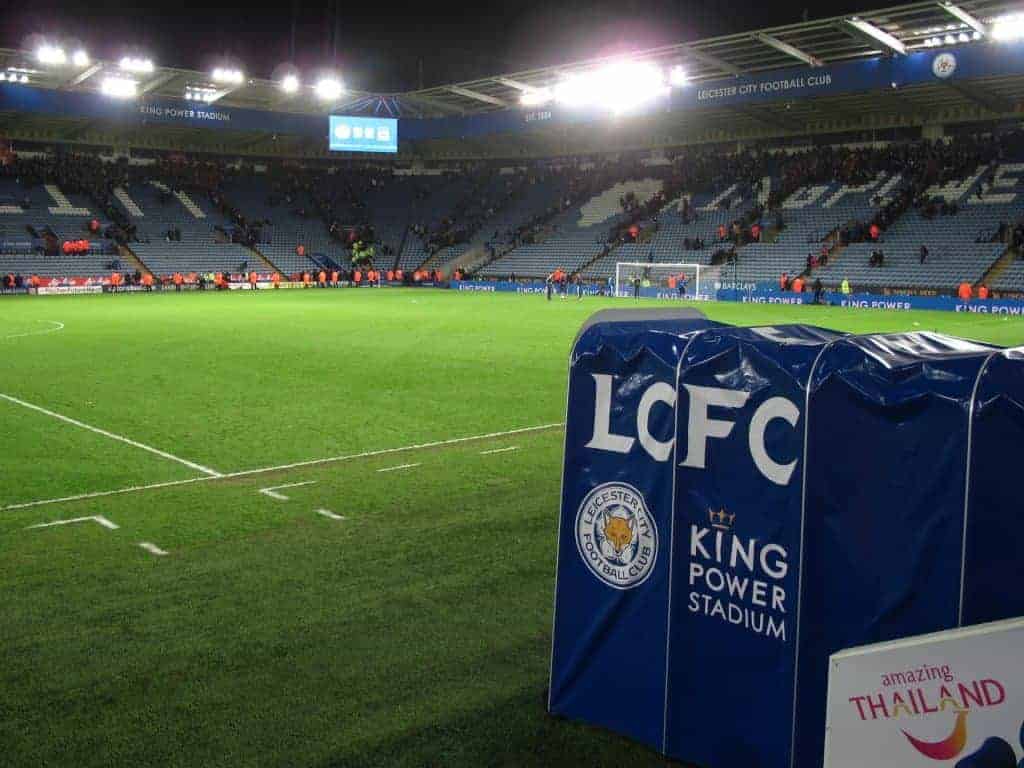 A story like Leicester City coming from nowhere to win the title couldn’t happen in America.

These types of things can’t happen in American sports, because the only way into a bigger league is essentially to write a check. Likewise, in the US, the bottom of the standings have no interest at all. For example, an NBA team will often throw the rest of their season (known as “tanking”) to get a better draft pick. Ask yourself: What would be more interesting as an NBA fan at the end of the season: watching your team tank completely and hope for a good player to come out of it, or see your team fight for its life, so you don’t have to watch them play Fort Wayne next year?

All the clubs promoted, relegated and into Europe for the 2020-21 season.

There isn’t promotion from the Premier League, but they do have something to compete for beyond the league championship.

The top six or seven teams teams go into the next season’s European competitions, the UEFA Champions League, the UEFA Europa League, and the UEFA Europa Conference League. Here’s more on European qualification from the Premier League.

Promotion and Relegation: A Whole New Reason to Watch

So, if you’re watching English soccer, pay attention to such phrases as “relegation scrap,” which means two teams toward the bottom playing each other, or “Great Escape,” which is when a club is headed down late in the year but stages a run to save themselves. You’ll also hear announcers talking about the “European places.”

Leagues within a league and the chance to move up on merit — truly great things about English soccer.