What Does it Mean to “Go to Wembley”?

If you are getting into watching English soccer for the first time, you have probably noticed there are a lot of words and phrases you don’t know; it’s like a language and subculture all its own, and one of the key phrases, indeed aspirations of the land, is to “Go to Wembley.” 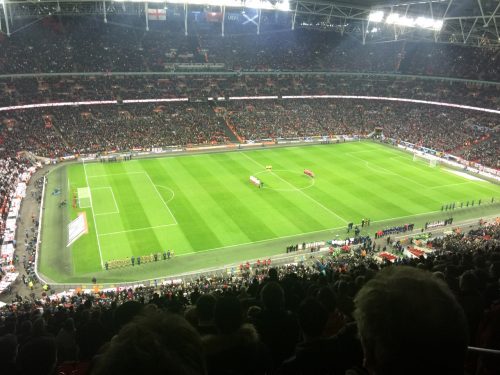 Of course, there is the obvious meaning here: Going to Wembley simply means playing a game at Wembley Stadium in London. But other than being in a big stadium in the capital city, what’s the big deal?

For Americans, you will have to learn a new concept here: the national stadium.

In the States, we just don’t have such a thing. Our country is too damn big, with too many sports and teams going on, to have one place that is the place, the home of the national team and also the home of every important championship game.

But that’s exactly what Wembley is: the 90,000-seat home of England’s national soccer team as well as the championship game of every national competition the sport has to offer.

So getting to Wembley means your club is playing for something serious, for “silverware,” for glory, and is doing so on The Big Stage.

There is one itsy bitsy exception to this. The FA Cup Final has for decades been played at Wembley, but it used to be that the semifinals were played at some other neutral ground like Villa Park in Birmingham or Old Trafford in Manchester. But in their infinite greed and non-wisdom, the dickheads who run the FA decided to play the semis at Wembley, because … money. 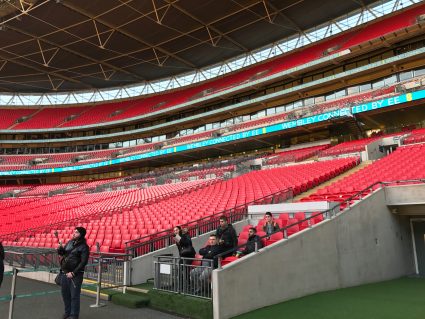 On the touchline during the Wembley Stadium Tour.

Never mind that a northern club’s fans would now have to make two trips to London, that the already-congested transit system there gets three workings-over — and two on consecutive days, which by the way makes it even tougher for out-of-town fans to get a (ridiculously expensive) hotel room for the weekend. Anyway, don’t get me started, but this is one tiny blemish on the whole Wembley Mystique.

Another slight change: While building their new stadium, Tottenham Hotspur played all their home games at Wembley during the 2017-18 season and most of the 2018-19 season. Their new home is open now, of course.

I should point out here that the current Wembley is not the original Wembley. That one was built in 1923 and torn down in 2003 – along with its iconic twin towers. (Funny note: they piled up all the debris from that stadium in a park in East London called Northala Fields, so you can sort of walk to the grass-covered top of the Old Wembley there.)

The new Wembley is an absolutely gleaming palace, now topped with an iconic (I suppose) arch that is lit up different colors for different occasions. For example, when I saw England play Scotland in a World Cup qualifier there, it was lit up red and white for the English colors.

Wembley, lit up in English red and white.

Here is a video panorama I shot during my Wembley Stadium tour:

It is an awesome stadium, that looks and feels like some kind of spaceship. It also hosts concerts, NFL games, boxing matches, all sorts of stuff.

When a team’s supporters find out they are going to Wembley, there is a traditional song for the occasion. Here are Sheffield United’s supporters giving it a go:

The lyrics are pretty simple:

Whatever will be will be