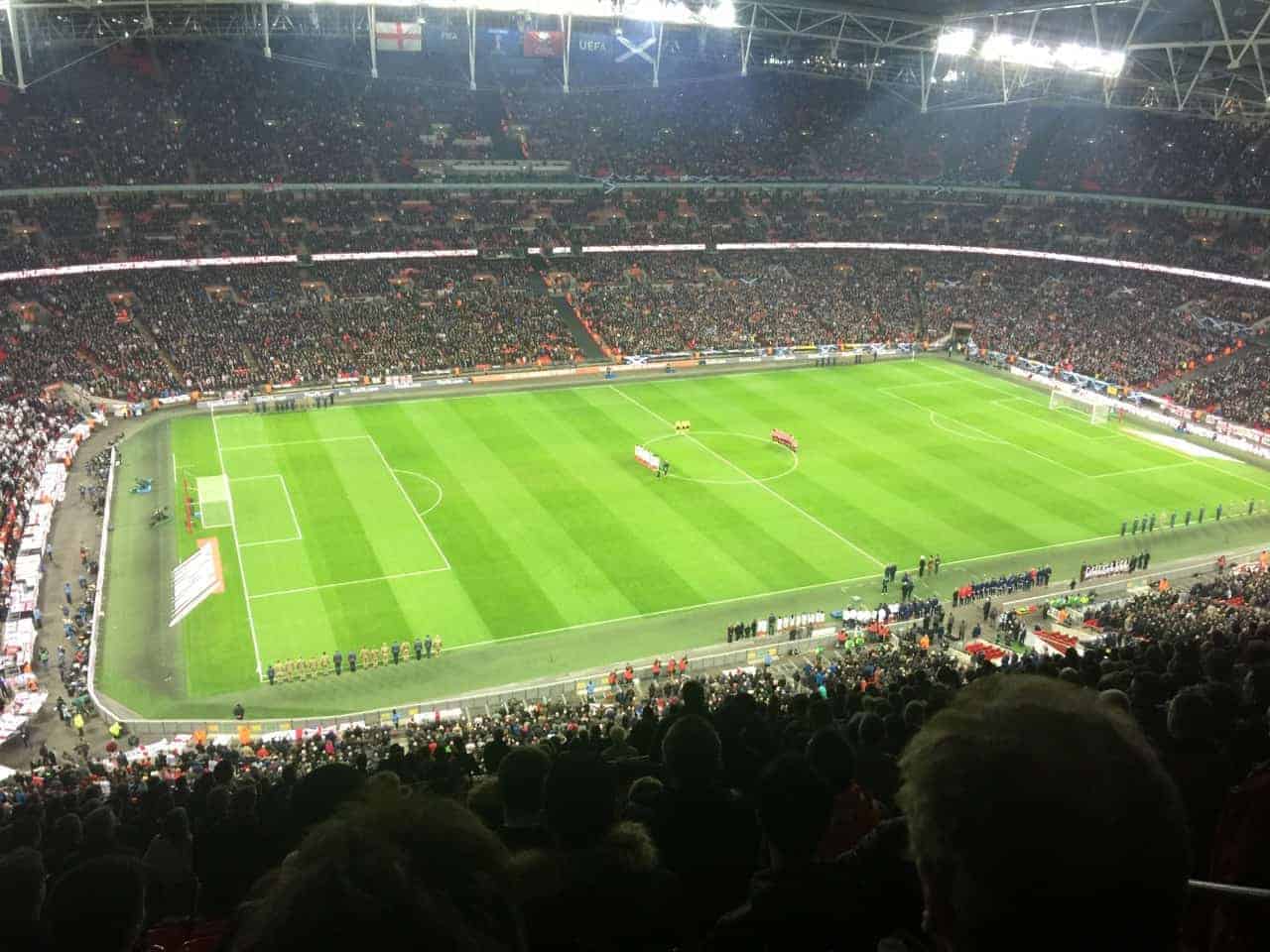 In this throwback from 2016, I attended an international match at Wembley, the England v Scotland World Cup Qualifier, which frankly turned out to be the least interesting aspect of the whole evening.

I’ve got this theory that one of the main reasons for the existence of soccer – indeed, sports in general – is so that grown men can go out in public, get drunk, act like children, vent their anger, sing, and scream a bunch of obscenities. Sometimes it really seems like that’s it. 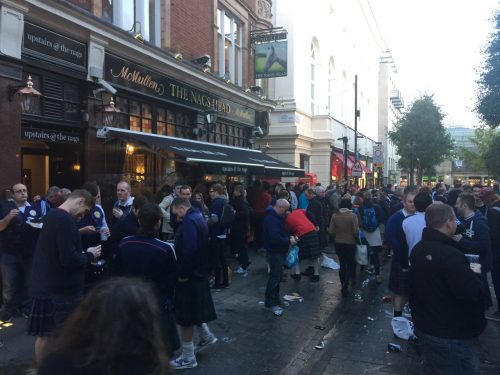 And even when there appears to be something more at work – something mythical, something sublime, some expression of tradition or community – I am reminded of the saying, “It’s the most important non-important thing in the world.” Perhaps.

I mention all of this because, in some ways, and at some times, and perhaps in some minds, I attended a massive event the other night. It was a World Cup Qualifier between England and Scotland. From my American perspective, I thought, “How could that not be intense?” It’s not as if there’s no history between the two. Even on the pitch, there have been legendary battles. And with the World Cup on the line, the stakes could hardly be bigger. With Wembley Stadium as the stage, I was thrilled to get tickets, and it was going to be the highlight of my latest English tour.

The feeling only intensified when I emerged from the London Transport Museum – I am a complete nerd for all forms of travel and mapping – and into Covent Garden. In November the whole begins to transform into a Christmas wonderland, with lights and Santas and shoppers and musicians. And on this day, men in kilts. Drinking men in kilts. And garbage.

In reading the history of this matchup, one often encounters the phrase “a Tartan Army invasion of London.” And from the looks of things on the road between the Nags Head and the White Lion on James Street, an invasion was indeed on. We had drink, we had kilts, we had blue face paint, we had feathered hats, we had Scottish flags, and we had songs which, wonderfully, included a fine Scottish brogue.

I tried to capture some of this in a video: 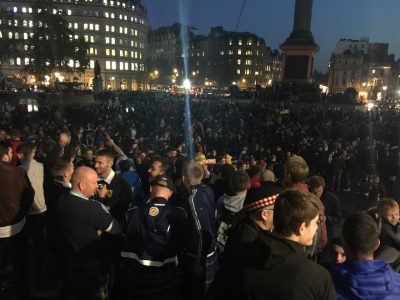 I was far from being the only tourist in the area recording the scene. It had rather the feel of a Human Zoo. “Honey, look, it’s drinking time, and they’re starting to sing. Oh dear, that one fell down.” Yes, in addition to being wild and woolly, they were also falling down occasionally. And making a horrific mess. And perhaps leering a bit too much at the tourist ladies, even if some of the former wanted their pictures taken with members of the Army. I enjoyed the “lads will be lads” thing, and the shocking of sheltered tourists is rarely a problem for me, but I also worry about the perception people have of soccer fans, and as a person with my own (thankfully past) drinking issues, it’s tough to really enjoy the rampant overindulgence.

I saw on Twitter (something I thought I would never say) that there was even more of it going on in Trafalgar Square. So, off I went. And my goodness it was a scene. This time there were no gawking tourists, the whole thing being a bit too daunting. I waded in, nonetheless, though on a couple of occasions I thought my camera might be requisitioned, and at least one empty tin can was kicked my way. Still, I got what I came for: just add to these sights and sounds the smell of stale beer and urine.

As unpleasant as all of this may seem, it is positively paradise compared to the experience of actually getting to Wembley Stadium that evening. First, I met my friend David, and we went down into the Covent Garden Tube Station. For an idea of what that was like, here’s a sign from the bottom: 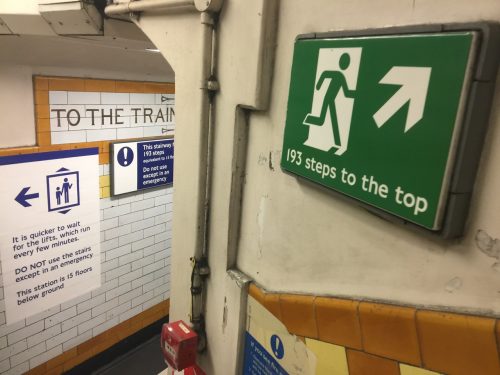 Glad we went down!

Next was a transfer which, for a mild claustrophobic like me, was a bit challenging: 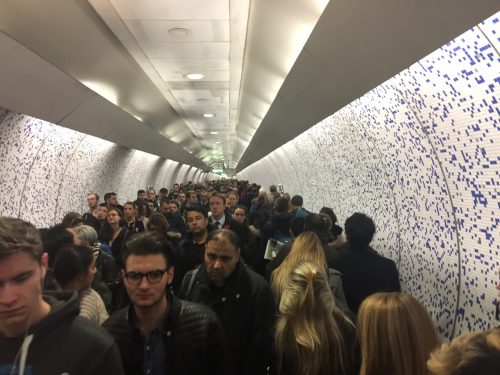 Just another evening in the Tube.

On the final train, we wound up trapped in a car with half a dozen of the Tartan Army. At first, again, it was kind of funny, seeing the commuters so shocked. This song, in particular, caused heads to shake:

The words, if you missed them:

Oooo, I know a lassie,

She’s as tight as the paper on the wall.

I’d love to fuckin’ ride her.

When it’s combined with gyrating hips, swirling tongues, and hands that bang on the roof of the car, it does make an impression. 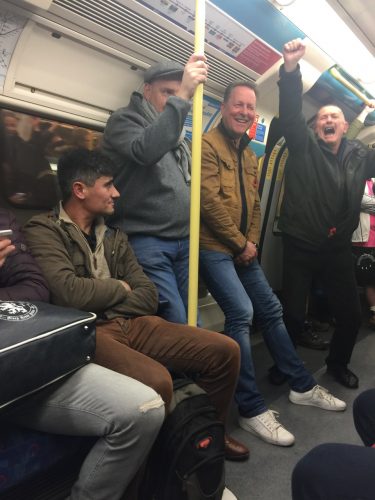 Off to our right were a few very British gentlemen – what-what and cheers and all that – and they thought the boys were charming. Then one of them started to sing along, encouraged in such by the leader of the Tartan Platoon, who was dancing and hopping all over the car. Eventually the oldster was belting it out, as if to say, “I know a lassy as well!” I’m still not sure if it was funny, pathetic, or both. You can see and hear him on the video above.

Our local unit, upon arrival at Wembley Park, blended into the larger march – and I should mention in all this, in fact throughout Central London that afternoon and evening – I saw nary a sign of English support. It’s damn hard to find a fan base that is more down on their team, more discouraged, more spiteful towards their own than those of English soccer. They invented the game in the 19th century, won one World Cup in 1966 at the old Wembley, and since then have done, as they would say, pretty much fuck-all beyond make a few semifinals. And yet somehow everyone convinces themselves that England is (or should be) good at this.

Scotland are under no such illusions, at least when sober. And their passion for the event, at least, can’t be overstated. They may lose, but they will be heard! In fact, I got swept up in it when a redheaded kilt-wearer (I am not making this up) saw my Portland Timbers hat, yelled “Portland!?” and, upon confirmation, yelled back “Kris Boyd” and gave me a soul brother handshake. Kris Boyd being a Scot who played (briefly and poorly, it must be said) for the Timbers a few years back, and this bloke being a fan of Glasgow Rangers, his former team. That he would remember all this and we would bond over it is one of those things that makes me think soccer might be okay after all. 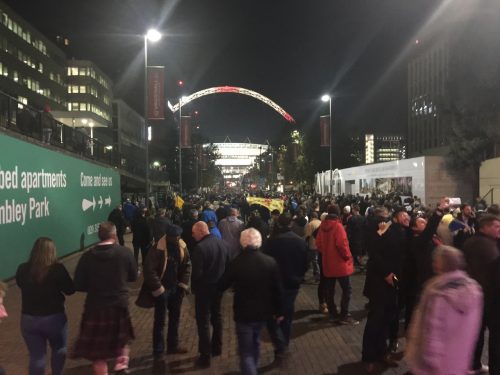 Along the Wembley Way.

Wembley, lit up in English red and white.

Ah, right – the game. Well, the stadium is magnificent, a true palace, all gleaming and seemingly the size of some movie-set space ship. 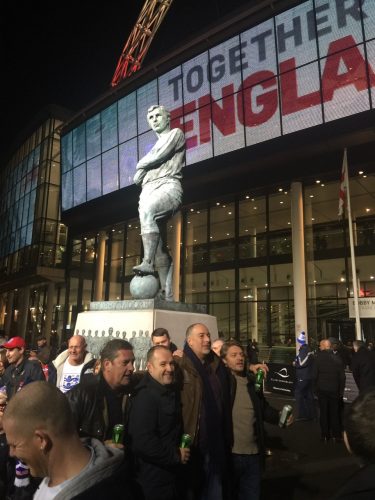 It even has TV screens telling you where your favorite snacks are available: 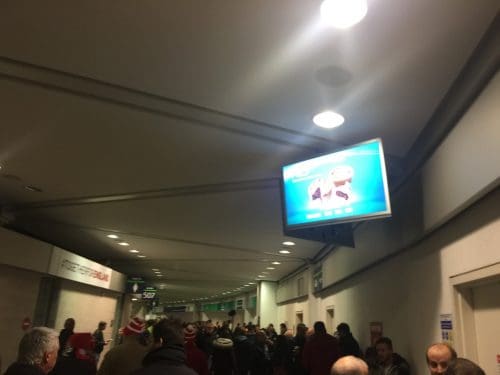 The stadium is enormous: 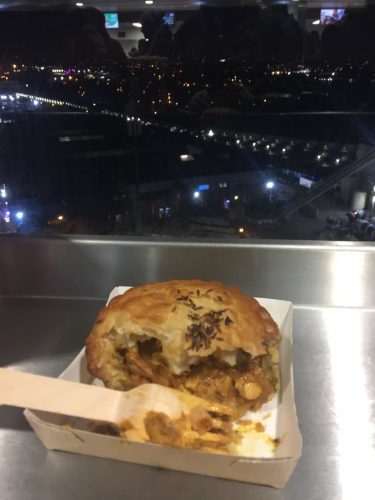 I call this one “pie in the sky.” Sorry. 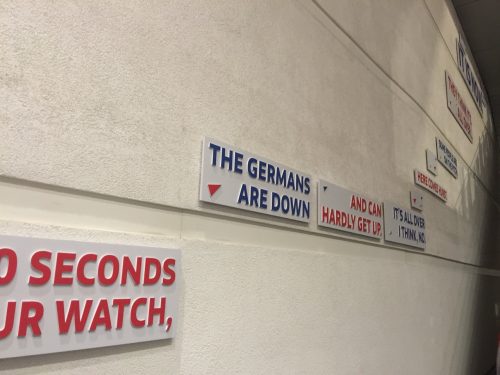 England has an obsession with the 1966 World Cup — probably because they’ve never won anything else.

It’s also confusing as hell, and it took us 20 minutes and several sets of directions to arrive at the ticket office. Some 30 minutes later we had a pregame meal about 40 rows up, and then we were in. 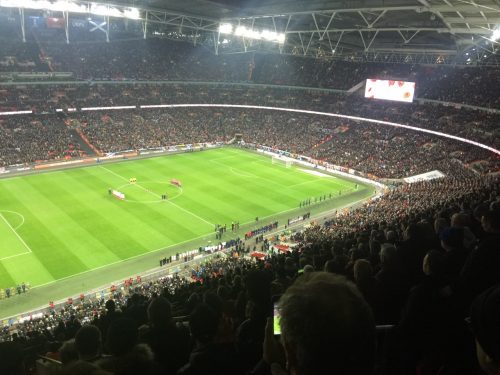 The far corner, bottom to top — all Scots. 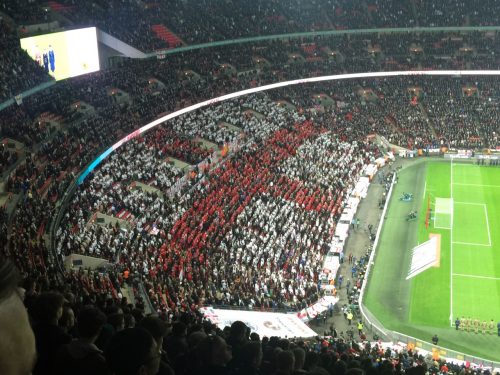 The scene was magnificent, the Tartan Army loud and proud, the English fans doing their best, unfortunately, to drown out the visitors’ anthem — and thus ruin my video of it.

England belted out a proper God Save The Queen, highlighted by a neighbor of ours yelling YOUR queen at the Scots. Old grudges die hard.

And then the game started – the game being frankly the least interesting part of the night. England won, 3-0, on three fine headers. But no one will remember this as one of the Greats – rather, an overrated and not too interesting England taking care of business against a poor Scotland, the latter being on their way out and the former on their way to another embarrassment in Russia in two years. It’s like when Nottingham Forest plays Aston Villa – for Americans, think the Pistons and Bulls – and you say to yourself, “This game used to mean something.”

Most of the excitement was in the stands – not that the atmosphere was particularly impressive, but the hatred was. A few Scottish fans managed to get into our section, and decided for some reason to wear their colors, which inflamed local passions. Wave after wave of “Fuck off” and “wankers” rolled at them, with one of them being removed by the stewards for having the audacity to say something back. Chests were bowed, noses tapped together, and the escort out was made, to the usual soundtrack of English “Cheerios.”

The game made the Scots go silent, and though they enjoyed themselves, I can’t say the English fans set a really high standard. They care, sure, but they know who they were playing, and they know what’s coming next.

I will say this for the night, which was fun and an experience with good company: Against all odds, and aided by an 80th-minute departure, we walked to Wembley Park Station, hit the platform basically in stride, got seats (!) on an arriving train, hit the Tube connection perfectly, walked out of Brixton Station to find a taxi right across the street, and exactly 62 minutes after leaving our seats hit the couch at home in South London. Thank you, travel gods!