Yes, English Soccer Does Have Playoffs

Are there playoffs in English soccer? The answer is yes, with two caveats: Not in the Premier League, and not to determine championships. Here’s more about the playoffs.

One of the biggest differences between English soccer and every American sport is that we Yanks rely on a postseason playoff to determine champions, whereas in England they just go by the best record during the season.

One thing to keep in mind, should you be thinking about the best time to go to England to watch soccer: May, because of the playoffs, is a truly awesome month.

Most Americans don’t realize there are playoffs in English soccer. That is mainly because they aren’t in the Premier League, which is where most American fans focus their attention.

The playoffs are in the lower leagues. They also don’t determine championships.

How the English Football Playoffs Work

First, a quick reminder: The leagues and cups of English football are arranged in a pyramid, connected by promotion and relegation. So, at the end of the season in all the leagues, there is a champion determined by record over the course of the whole season — but also, the bottom three clubs have to drop down a league for the whole next season. That’s relegation. Promotion is simply the top three coming up from the league below.

Below the Premier League, in the three levels collectively called the English Football League, the top two are automatically promoted, but no. 3-6 go into a playoff. No. 3 plays #6 in a two-legged playoff, with the first game at #6 and the second at #3. Aggregate goals win, and away goals are the first tiebreaker. So if it’s 1-1 the first game at #6 and 2-2 the second game at #3, team #6 wins because they got more away goals.

Meanwhile, #4 plays #5, same deal. The winners play a final at Wembley stadium, which is where pretty much all championship games are played in England — thus creating the mystique of “getting to Wembley.”

All of the English soccer playoff games will have cracking atmosphere and great drama, especially the second legs, when somebody has to advance. 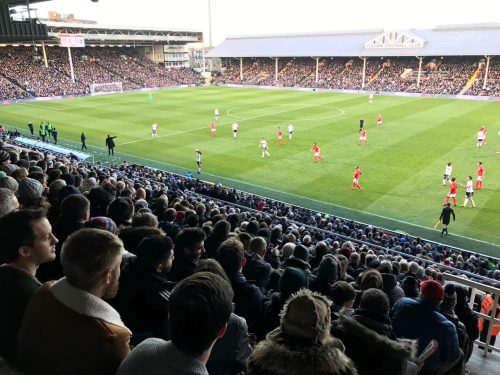 Craven Cottage, home of Fulham FC in London, has seen a lot of playoff football.

The EFL Championship Playoff Final is often considered “the richest game in football.” The loser has to go back to the Championship for the next season, but the winner? They go to the Premier League and get a share of all those television bazillions, not to mention selling out pretty much every home game next year. (Imagine selling tickets for a home game against, say, Barnsley versus against Liverpool.)

The estimated worth of the 2021 final, won by Brentford to get them into the top tier for the first time in 74 years, was said to be around $240 million.

Whenever we think of the playoff final, we think of the 2014 edition, when Queens Park Rangers beat Derby County on a late winner by Bobby Zamora. Here is the clip of that one. Just listen to the crowd when it goes in!

When Are the English Football Playoffs?

The playoffs in English soccer start just after the Football League season concludes, which is usually around the end of April and beginning of May.

For the 2022-23 season, the exact start date of the playoffs hasn’t been announced. But we do know the last day of each league’s season as well as the final dates for Wembley:

Viewers in the U.S. can watch all the English Football League playoffs on ESPN+.