Where to Sit at an English Soccer Game

If you are trying to see a soccer game in England, the first challenge is picking which one to go to. Next, of course, is getting in, which will be a hassle if you’re stuck on big-club Premier League tickets. 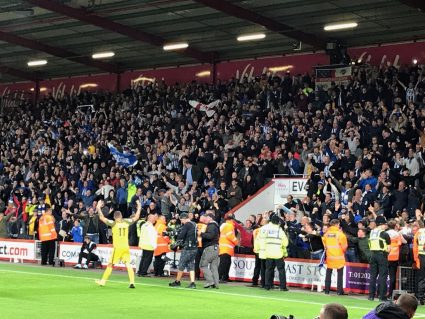 But once you can get tickets, and especially if you have any choices at all, you should think about where to sit.

Some people prefer sitting behind a goal, mainly because there’s a lot of action there, and you could see a goal right in front of you. Also, if you’re into such things, the most vocal and rowdy home fans are usually behind a goal.

My System for Finding the Perfect Seat

I take some of these things into account – I do prefer being between the goals instead of behind one – but the main thing I look for when picking a seat is something most Americans probably haven’t thought of: Get a seat with a good view of the away fans. 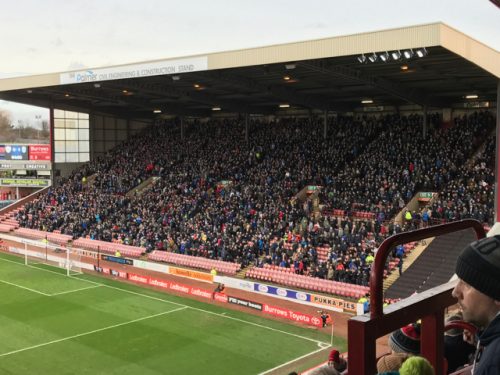 Officially there were 4,619 Huddersfield Town fans who made the short trip to Barnsley.

For my American readers, this hasn’t occurred to you because at almost any sporting event in the US, except for college football games, there are no away fans. And even if there are, there’s not 3,000 of them packed into a corner together, singing their guts out all night. Yet this is exactly what you find at any Premier League game, and at a lower-league club there could be just as many. At Cup games there could be more.

After all, the singing and atmosphere are part of what so many Americans enjoy about seeing English soccer in person. We Yanks just don’t sing at sporting events.

Why do I like to sit with a view of the visitors? A few simple reasons:

Like I said, they sing all the time, and I like to make out what they are singing. For example, here are Tottenham fans doing “When the Spurs Go Marching In” at Aston Villa a few years back:

I also like to see — and take videos of — away fans in case their team scores in front of them. Here is a late goal for Sunderland at Manchester United, in front of 9,000 of their fans:

That video, by the way, created a real sensation online and caused me to become an honorary Mackem.

Sometimes, if you can’t get a good view of the away fans, you want to sit near them so you can enjoy some of the banter. This was true for me on what I call my Sad, Wet, Fun Night at Upton Park, when Man City was beating West Ham so thoroughly that all anybody could think to do was have a go at each other. Here’s a bit of that:

The Hammers on the right had just done this goofy thing where they pretend they scored a goal, then mocked City’s backwards Poznan dance. City’s response, if you can’t make it out, was to sing “What the fucking hell was that?”

Heck, if you can’t sit near them or across from them, it can be fun (though tricky) to be amongst them. I have done that a couple times as a Fulham fan, at Bolton Wanderers in the league and at Sheffield United in the FA Cup. That can be pretty intense, though, since the away fans tend to be the rowdy ones. Well, they do if they aren’t Fulham fans.

Here is another Sunderland experience. I sat with them (being an honorary Mackem and all) when they ended a long Chelsea home winning streak. Here’s the winning penalty — and yes, Americans, that is Jozy Altidore out there. He earned the penalty, in fact.

So there are four good reasons that, if you can, I think you should try to get seats with a good view of, or very close to, or even among the away fans. It can really add layers to your experience at an English soccer game.