Getting Away Tickets to English Soccer Games

Occasionally, when Groundhopper Guides is helping an English soccer fan who wants to see one of the big Premier League teams play, the subject of buying an away ticket comes up.

The ticket office at Fulham FC in London.

“If getting tickets to a game at Liverpool is so hard,” the theory goes, “why not just go see them play somewhere else?”

It’s pretty simple: as hard as it is to get a ticket for the big Premier League clubs, it’s about 10 times harder to see them play on the road as a Liverpool fan.

Why? First, think of it this way: You can’t get a ticket through normal channels to see Liverpool play at home, where they have 54,000 seats “available.” What are the odds you’ll snag one of the 3,000 seats they get at Leicester City?

Sometimes it’s not even that many seats. The Football League “requires” that a club give 10 percent of seats to the visitors, but trust us, they’re not getting 7,500 at Old Trafford. Now, at a Cup game maybe, but, even then, you’re not getting an away ticket for one of the big boys.

The reason is the way clubs allocate tickets. For home games it’s multi-layered and pretty complex. But for away games, it’s a straight-up loyalty points system. And how does one get loyalty points? You guessed it: by buying tickets! Sometimes they have home points, away points, Cup points, who knows what. But you won’t have any of them, because you can’t get tickets!

In addition, for all of the clubs where Groundhopper Guides sells tickets and hospitality, we are not allowed to sell tickets to away fans.

Away Tickets at Non-Premier League Games in England

Another route is, as always, to move beyond the Premier League. Down in the Championship, I have had some good times traveling with Fulham since I kind of adopted them as my English club. I’ve been to Sheffield United, Bolton Wanderers, and Nottingham Forest, and sure, it’s a different perspective. It tends to be general admission in there, so you can pick which cast of characters you want to sit or stand with. 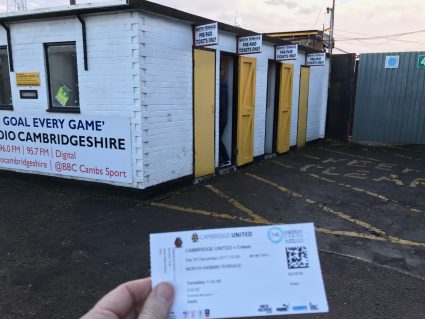 I also sat with Sunderland fans at Chelsea one time, after I had become an honorary Mackem earlier that season and some of their fans hooked me up. And one of these days I will travel on an away coach with the real fans.

At smaller clubs, like with all things ticket-related, everything is easier.

Back home in the US, I went with the Timbers Army to see them win in Vancouver, and also to see them win the 2015 MLS Cup in Columbus, which I just like to mention occasionally.

But even in the lower English leagues, if it’s a derby match, good luck. Always a tough ticket.

All in all, being an away fan can be a cool and different perspective on seeing an English soccer game. Just forget about being one for a big Premier League club.