You can buy English soccer tickets from third-party sites like StubHub. But is it safe?

My short answer to this has always been really simple: I’ve never dealt with StubHub, or Viagogo, or TicketBis, or any of the other third-party sites. So I don’t have any first-hand experiences to tell you about.

One time, when in Liverpool the day before an FA Cup game, I went to the local Craigslist and found somebody selling. I went with it only because she was going to meet us outside, collect the money, and walk in with us, using her season cards. As a bonus, we even got to stand with her on the Kop for the game!

But the question keeps coming up, so I will attempt a further answer.

The critical thing to know is that all of these sites are illegal.

It is against the law to resell football tickets in England, at any price. So I don’t really know what recourse you have, should something go wrong.

The Premier League, by the way, maintains this list of known unauthorized ticket sites. You’ll notice that StubHub and Viagogo are not on there, but you should also know they were both recently raided by the authorities.

Related Post: Everything I Know
About Buying English Soccer Tickets

When in doubt, go to the club!

What is the safest way to buy English soccer tickets?

The only way to legally resell tickets to English football games is to package them with something else, like a hotel room or meal or lounge access — in an approved hospitality package through an approved broker.

One such broker is Champions Travel, and I am a registered reseller with them. Champions buys blocks of tickets and makes them available to folks like me, to sell to folks like you.

You can read about some of these experiences in my Reader Reports section.

If those are too expensive for you, and they are for many people, you’re pretty much left with StubHub or their like — or a different game entirely. Usually, when people go the third-party route, I never hear from them again, which I assume means all went well. Otherwise, I have heard back from four of them recently, and here are their experiences: 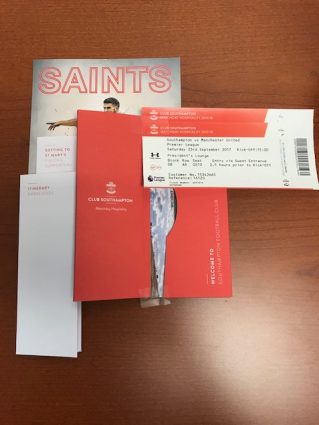 A hospitality package, like this one to Southampton, is a totally safe purchase.

That last group, who thought they had tickets to Leicester City until they actually got to Leicester City, rather miraculously got in anyway, by buying the last four hospitality packages from the club — which they could afford. As for dealing with StubHub, they eventually got their money back, but the lead person in this group is an attorney who actually has contacts at StubHub. As he said, other folks might not be so lucky.

Officially, what StubHub in the UK says about getting ripped off is in their FanProtect Guarantee:

If the tickets you ordered are invalid and not honored by the venue, StubHub may, in its sole discretion, attempt to locate replacement tickets for you or provide you with a full refund (including any fees and shipping/handling charges). StubHub may require information from you or the venue to confirm that the tickets were invalid. You are encouraged to call our Customer Service from the venue if you experience problems with your tickets. You must notify StubHub and complete any required forms no later than seven days (or such other time as communicated by StubHub to you) after the event.

Do with all of that what you will — but I’d be nervous about that “sole discretion” business. They’re basically saying they reserve the right to tell you “Tough shit.” I still have never bought from any of them, and I doubt I ever will. Personally, I don’t consider it worth the risk, and I want to know what I’m buying.

I go to the club directly, and if that doesn’t work I either go for a different game or look into hospitality packages. Nice and simple.

Get all our tips for watching English soccer