Like most Americans, when I started getting into watching English soccer, I basically knew four things: 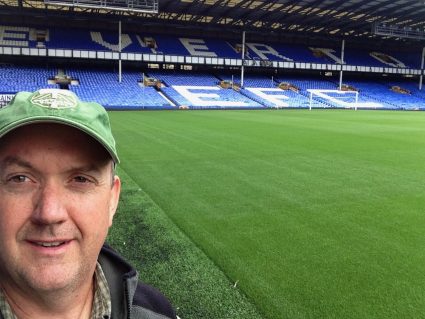 Me during a tour of Goodison Park, home of Everton FC

I am happy to report that after seeing more than 100 games all over England, I know a couple more things, starting with there’s an even better team in Manchester. And I even know some of the songs.

And yes, I picked a team. Being organized, I approached this with a plan. First, I ruled out all those teams mentioned above, because (A) the world has enough Manchester United and Liverpool fans, (B) I didn’t want to be just another American front-runner, and (C) I wanted to enjoy somebody’s rise to the top.

(Another thing I didn’t know: Nobody rises to the top. Chelsea and Man City have done it in the last 20 years or so, because some gazillionaire bought them, but I think that window has closed.) 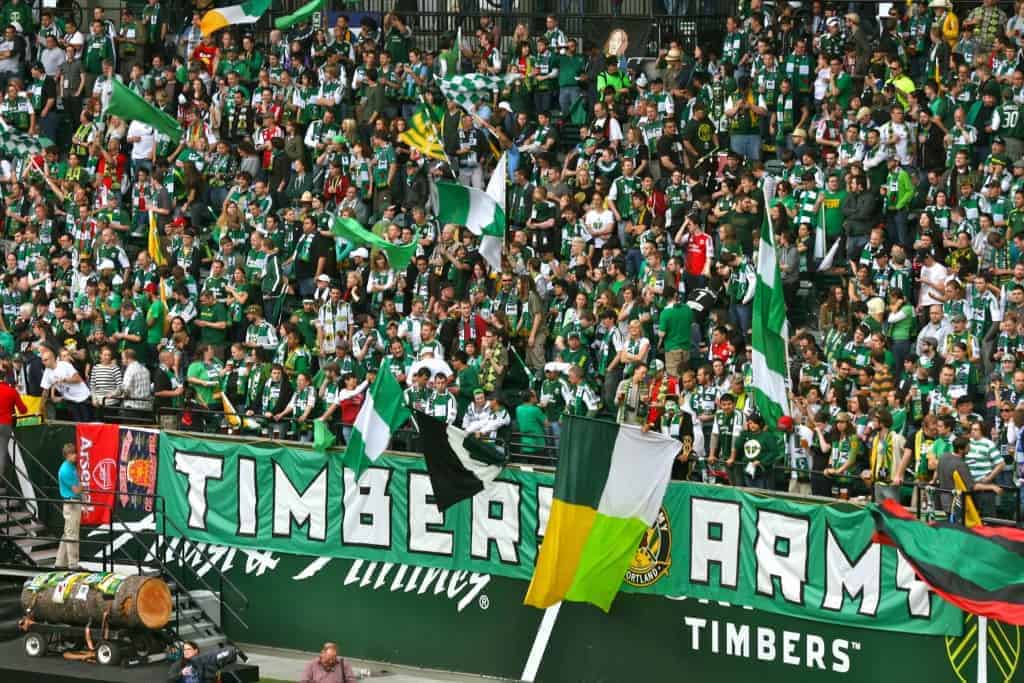 Where my heart actually lies.

I also didn’t want to cheer for somebody at the bottom, because I already grew up an Ole Miss football fan (English readers, don’t worry about it), and at the time this was going on, my hometown MLS club, Portland Timbers, were shite as the Brits would say. (They have gotten better.)

So I needed a mid-table team. And in a place I’d like to visit, which I am afraid at the time meant “London.” Like I said, my horizons have expanded.

I also wanted somebody who still played in their old ground, which is a word for stadium that I was proud of myself for picking up. I knew England was doing what the States did in the 1960s and 1970s, which is replace old and charming stadiums with horrible generic stadiums with no character whatsoever.

(Here’s hoping they go on to the next phase, which is building really cool but modern and clean stadiums perfect for that sport. See every baseball stadium built in the US since Camden Yards. Tottenham and Chelsea, we’re all looking at you.) 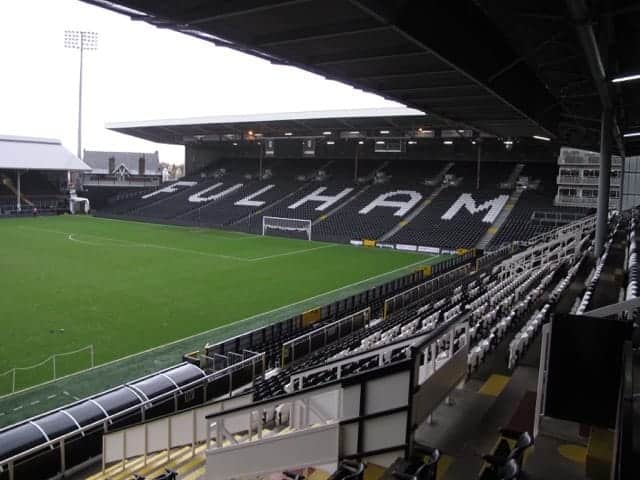 We have a winner!

The final criteria was American players, either current or a good tradition of former. So I looked around, did a whopping 10 minutes of research, and found Fulham Football Club.

At the time, they were in the process of finishing 7th in the Premier League — yes, this actually happened — and making the final of the Europa League. That actually happened, too. One of their top scorers at the time, a man who scored one of the great goals in club history to beat Juventus (this happened, too!), was a Texan named Clint Dempsey. And in the past, they had so many Americans, including about half the national team at one point, that they were sometimes called Fulhamerica.

Hell, they even had (still have) a bar there named for Brian McBride! So I was in. Color me Fulham, which I soon learned meant white. 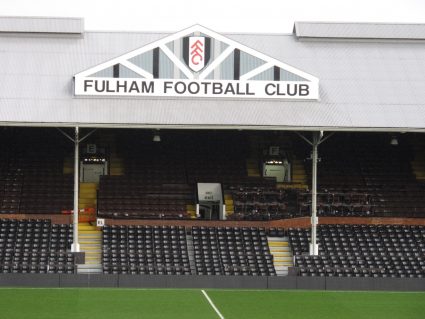 The rest is … well, a story. I toured their stadium, Craven Cottage, and it is beautiful. Craven Cottage is also an impossibly charming name for a stadium. The staff were lovely. But I also saw them play at Arsenal, and I overheard an Arsenal fan say “It’s hard to hate Fulham, they’re so bloody … nice.” I wasn’t crazy about that. I didn’t want nice. I wanted rowdy. Oh, and Arsenal crushed them, in a season when Fulham started to fall apart. I was having my usual effect on a sports team.

I also had to deal with a very awkward feeling when I heard our fans sing “Come on you Whites.” As a white man from the American south, this was a bit … weird.

The next thing that happened was that Dempsey left for Tottenham. I didn’t mind that, and I was kind of proud of an American playing for a big club like that. I considered following him over there, but hey, gotta be loyal. Also, my very good English friends are Arsenal fans, so Spurs were strictly out.

The Cottagers hosting Brighton and Hove Albion in 2017.

A quick aside from that relationship: I had few opinions about English soccer before all this started, except that Liverpool seemed to have an amazing stadium, and I already didn’t like Manchester United. But when I told my Arsenal friend that as a Fulham fan, “I guess I have to hate Chelsea now,” he just said, “Oh, that’s easy.” And it is!

And then things just got sour. Dempsey decided to go home to MLS and, due to bizarre rules, he was supposed to go to Portland. But he wanted to go somewhere else, and of course the league changed and/or ignored their own rules to make that happen. And he wound up in … fucking Seattle, our biggest rivals. He thus became the number one villain in my soccer world.

Then Fulham got relegated. I know I’m not supposed to quit on somebody then, and hell, it made getting tickets easier. But suddenly I “had” a team in something called The Championship, which seemed an odd place for a Premier League team to fall into. 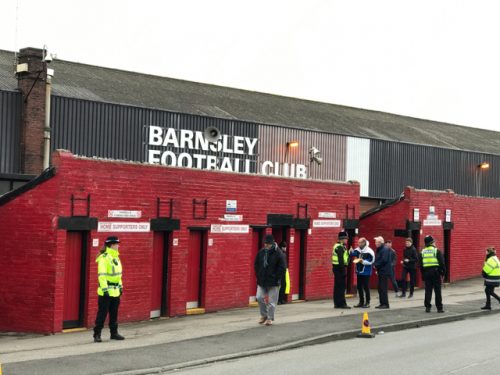 You never know where you’ll wind up.

I took full advantage of Fulham’s second-tier status, though, exploring around the league, going to cool places I’d never heard of (hello, Barnsley!), and deciding that, especially as a neutral, I think the Championship is a lot more fun to watch.

Then I saw some games, at Sheffield United (where I learned an important lesson about staying safe at games), another miserable affair at Bolton, and then a couple at home. It was here that I found out that Fulham fans are … bloody nice. Near as I can tell, they are about the poshest fans around. It really is like being an Ole Miss fan: it’s a lovely place for visiting teams, because the fans won’t give you any trouble, the scenery is lovely, the stadium sweet, and you’ll probably win.

As the years have gone by, I have somewhat drifted off from Fulham. I still call myself a fan, and maintain an annual membership. I have also learned some of the songs; I especially like their version of Country Roads; the one about Chelsea, telling them to stick the blue flag up your arse; and then there’s this one about their former owner Mohamed al Fayed, which is really about the big rivals, Queens Park Rangers:

Sorry I couldn’t find a better recording of that one. Here are the words:

He wants to be a Brit

And QPR are shit

A guy can dream, right?

It’s nice to belong to something, and you never know, they might get to Wembley or something. I would like to think they will get back to the Premier League some day, and I want to make sure I get tickets. But as I type this, I couldn’t name five of the starting XI, and I’m not completely sure where they are in the table (middle-ish, I think) or who their next opponent is.

So yeah, I’m a Fulham fan. But I don’t live and die with them. And I think most sports fans would understand. You don’t decide which team to support through some kind of intellectual process; you either go to games with your dad (Ole Miss for me), move to a place and go with the locals, or just fall irrationally in love with somebody (Portland and the Timbers for me.)

When Portland won the Cup, I smiled for weeks. When Seattle won it the next year, I was gutted. That’s our damn cup. Meanwhile, when Fulham wins, I think “Well done.” When they lose, I think oh well. There’s always next week … whoever we’re playing.