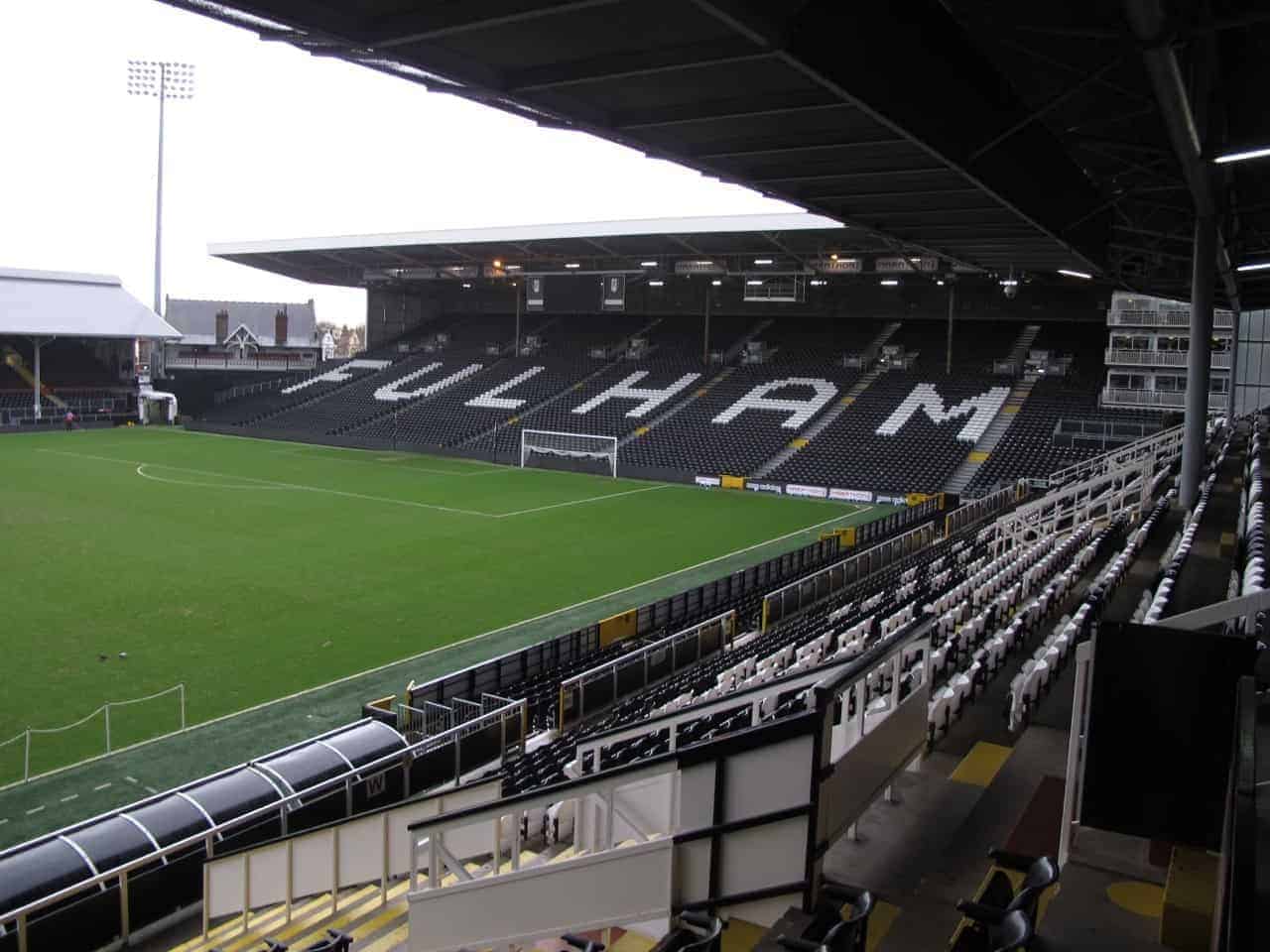 Seeing a Premier League game at Fulham FC in London is, for Paul, the epitome of what Americans will love about watching soccer in England.

Among the perks are small stadiums in the middle of big cities, local rivalries, and a chance to experience sport like we remember it as kids: without so much interference from giant TV screens, corporate sponsors, and luxury boxes.

And it’s places like Fulham that I try to get folks to visit, instead of the giant “big six” clubs where the stadium is immense and the tickets really hard to come by. So today I want to take you on a tour of their ultra-charming ground, Craven Cottage. (Why do I call it a ground rather than a stadium?)

Years ago, when I was getting started watching English soccer, I chose Fulham as a team to support. I was far from the only American to do this, because many Yanks have played for the “Cottagers” over the years. In 2007, in fact, six or seven Americans were on the team at various times, earning them the nickname “Fulhamerica.” About half the tour group I was in was American, and the club’s current owner also owns the Jacksonville Jaguars, so the connection continues.

The best known of these Yanks is Clint Dempsey, who scored a bunch of goals for Fulham from 2010 to 2012 before leaving for the brighter lights of Tottenham Hotspur (in north London), doing very little there, then cashing out and going home to Seattle of MLS, which made me have to kind of hate him. (I’m more a Portland Timbers fan than a Fulham fan.)

Taking the Tube to Fulham, you might think you’ve gotten off at the wrong stop. Emerging at Putney Bridge, you won’t see pubs or souvenir shops or any such thing – just a bridge over the Thames, a busy street, some old buildings, and a park. The first indication is a sign that might make you think you’re headed for a community center rather than a second-tier professional Football Club. (And here’s my guide to the leagues and clubs of English football.) 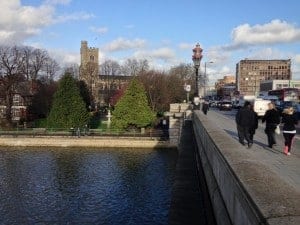 Putney Bridge over the Thames — gateway to Fulham Football Club. 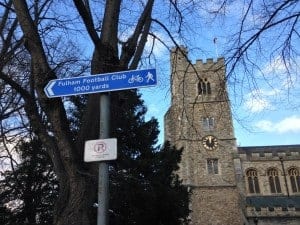 From here, it’s a pleasant stroll through Bishop’s Park, along the Thames, until what looks like a warehouse comes into view; that’s the Putney End of Craven Cottage. 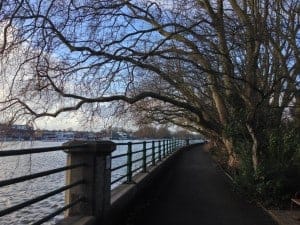 A pleasant stroll along the river. 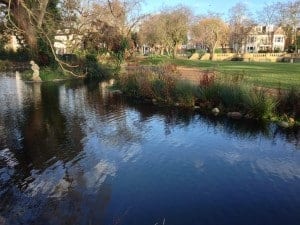 It’s all parks and gardens along the way. 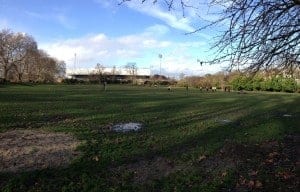 Your first view of Craven Cottage, from Bishop’s Park. (No, that’s not the Fulham lads warming up.)

And oh, how old fashioned and charming is Craven Cottage! The façade (dated 1880) is actually a protected historical building, so it looks the same today, and will in the future, as it did when it was built: 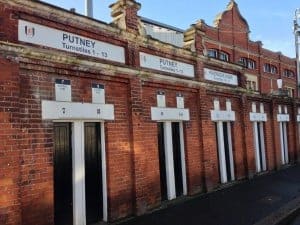 Fans enter the same place and way as they have for decades. 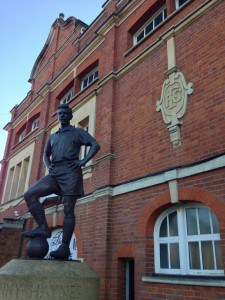 The statue is of Johnny Haynes, for whom that stand is named. He was a hero of Fulham and England back in the 60s. Pele, according to a quote seen often at the ground, called him “the best passer of the ball I’ve ever seen.” A cynical friend (and Arsenal fan) said to me, “I wonder what they paid him to say that!”

Such is the stature of Fulham that just about all of their “wall of fame” type displays have to do with Haynes, who quit playing some 40+ years ago. The place really does feel closer to “community club” than their neighborhood rivals Chelsea.

Before my tour started, I kept walking along the Thames for a bit to grab some lunch at a local pub, the Crabtree. It was a dismal January day, but I can imagine the place would be “heaving” when the weather is nice and “the Whites” have a home game. 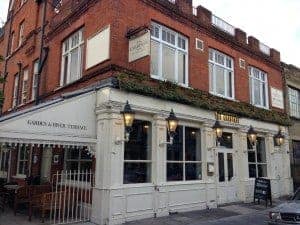 The Crabtree, a nice place for lunch or a pint before the game. 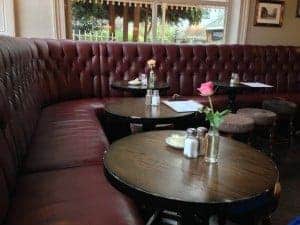 Cozy inside the Crabtree 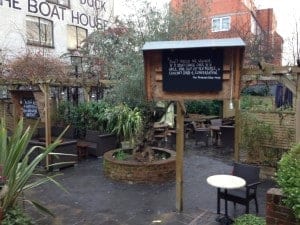 Try to imagine it with sunny weather and happy fans.

Our tour started in what passes for a luxury box at the Cottage; I had dorm rooms about the same size in college, and the few boxes there are have been tucked away in the end behind a goal. Here’s the view from one of them: 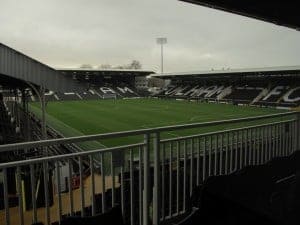 View from a “suite” at Craven Cottage.

Right behind another stand is the Thames; one of Fulham’s songs is about being from “down by the river.” 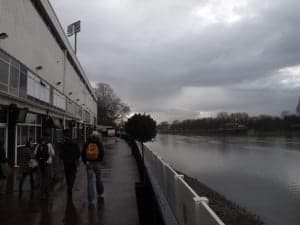 Some days, you can watch footy AND rowing!

It was along here that they used to have a statue of Michael Jackson! The previous owner was a big fan and had it put up; our tour guide said that right away, they had to put up landscaping and security around it to keep fans from tearing it down. On the other hand, people left dolls and flowers and traveled from all over the world to see it. Strange world we live in. (The new owner had it removed, and it’s now in the National Football Museum in Manchester.)

What’s it Like to See a Game at Fulham FC?

Craven Cottage is remarkably small compared to just about all the other Premier League grounds; it holds about 26,000 people and, for perspective, I was standing very near the top of the Riverside Stand when I took this photo: 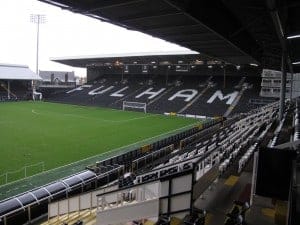 From the “cheap seats.”

The iconic roof of the Johnny Haynes Stand: 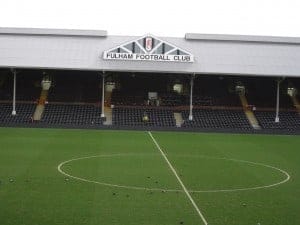 As seen on TV!

And the old-school wooden seats. Who has these anymore? 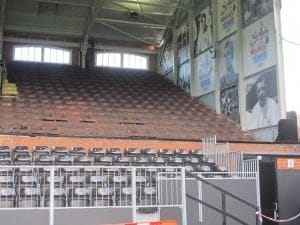 Here’s the Cottage itself, rebuilt here after a fire in 1904. Back then, it was a hunting lodge on the western outskirts of London. Today it houses the dressing rooms and VIP lounges for the club. 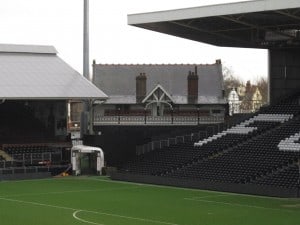 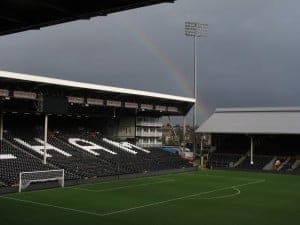 Part of all these stadium tours is going down to the “technical area” on the touch line. You get to sit in the actual seat occupied by such managerial greats as Martin Jol, Rene Mulenstein and Felix Magath! 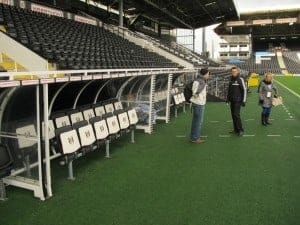 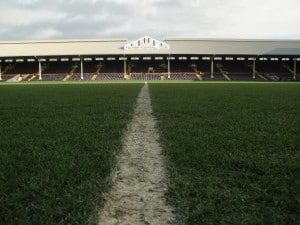 Where it all begins.

You also get to see the Chairman’s Lounge, the board room, and the coaches’ and players’ VIP areas – all of which are about the size of a big family living room in the States. 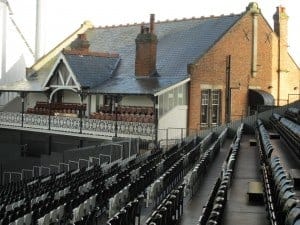 The cottage itself at the Fulham stadium. 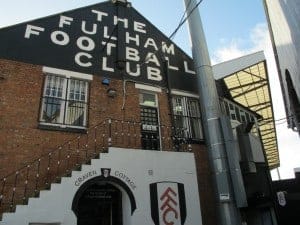 Those are all in the Cottage, and the players’ wives and girlfriends and kids sit in these tiny, old wooden seats on the balcony. 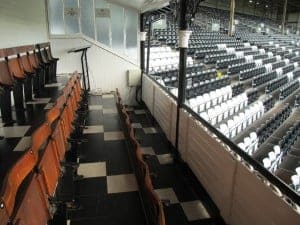 But speaking of small and old-fashioned, here is the “field maintenance equipment area”!

That’s right, at Fulham, for years a Premier League club, they mow the grass with the same mowers you’d see back home. Remarkable. They proudly noted, however, that on a recent rainy day in London, when Spurs had to cancel their home game due to an unplayable pitch, Fulham played on. They lost, of course, but still.

Our tour ended in the dressing rooms, which are so tiny it’s comical. As with most clubs, the away room is no-frills at all: 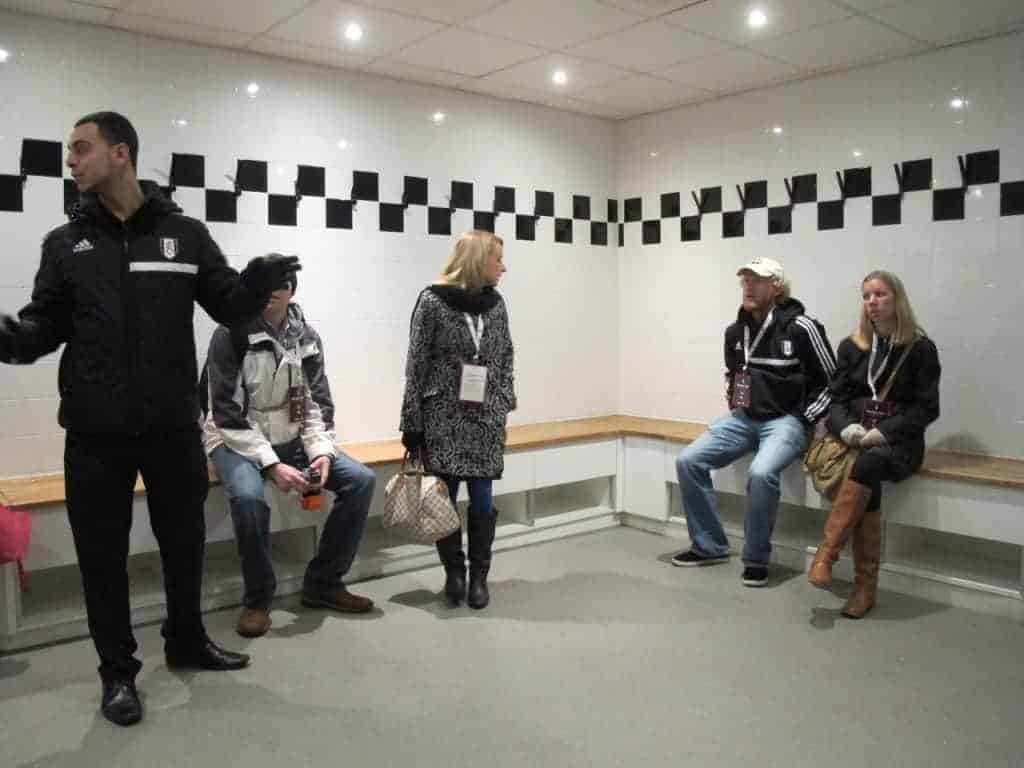 Imagine the greats who have had to sit in here! 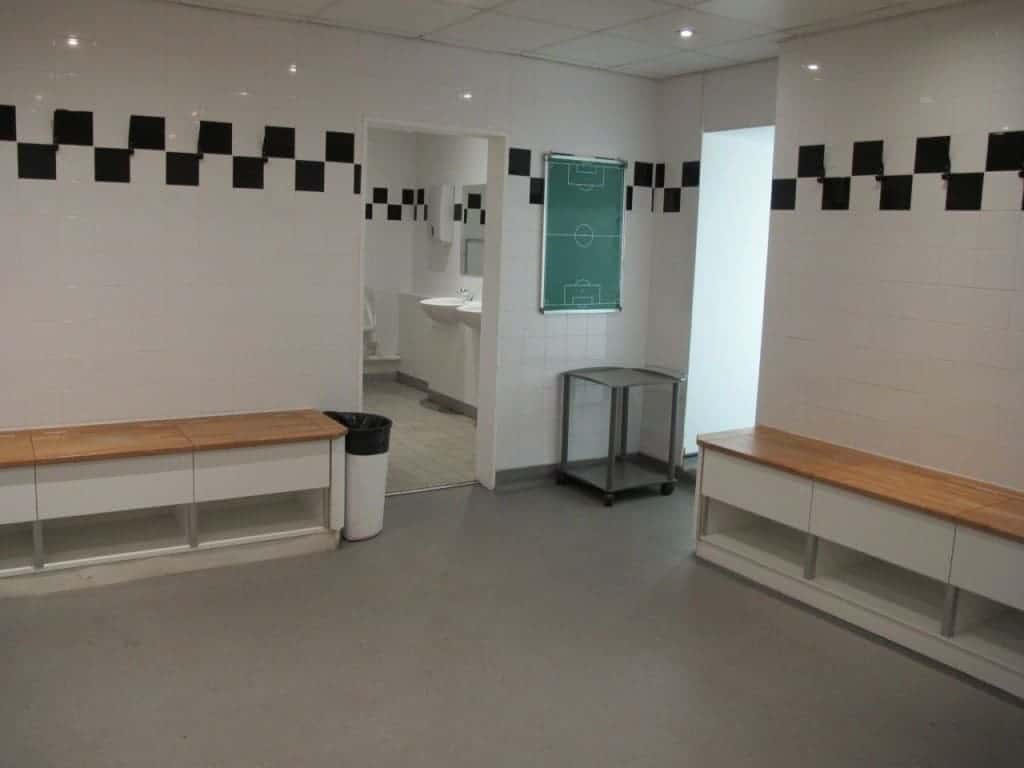 But even the home room at Craven Cottage is tiny: 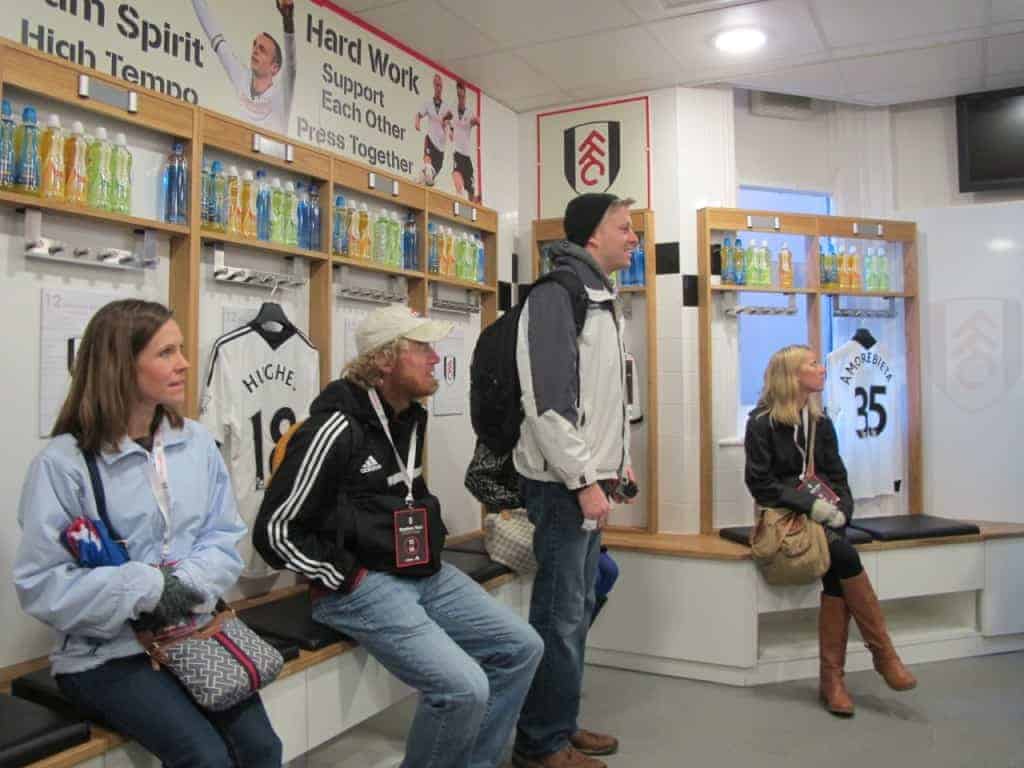 We got to see the “media interview area” (a sign plastered to a wall outside the dressing room) and the referee changing room (the men have to wait outside while female refs change). We were also told that since there’s no parking anywhere near the place, the Fulham players actually park at a nearby school and get bused over for the games.

My final impression of Fulham was a random moment in the home dressing room. I was standing back in the corner, listening to the tour guide, when I realized I was right in front of a cabinet full of medicine and supplements. One of them was a jar we could all use sometimes: 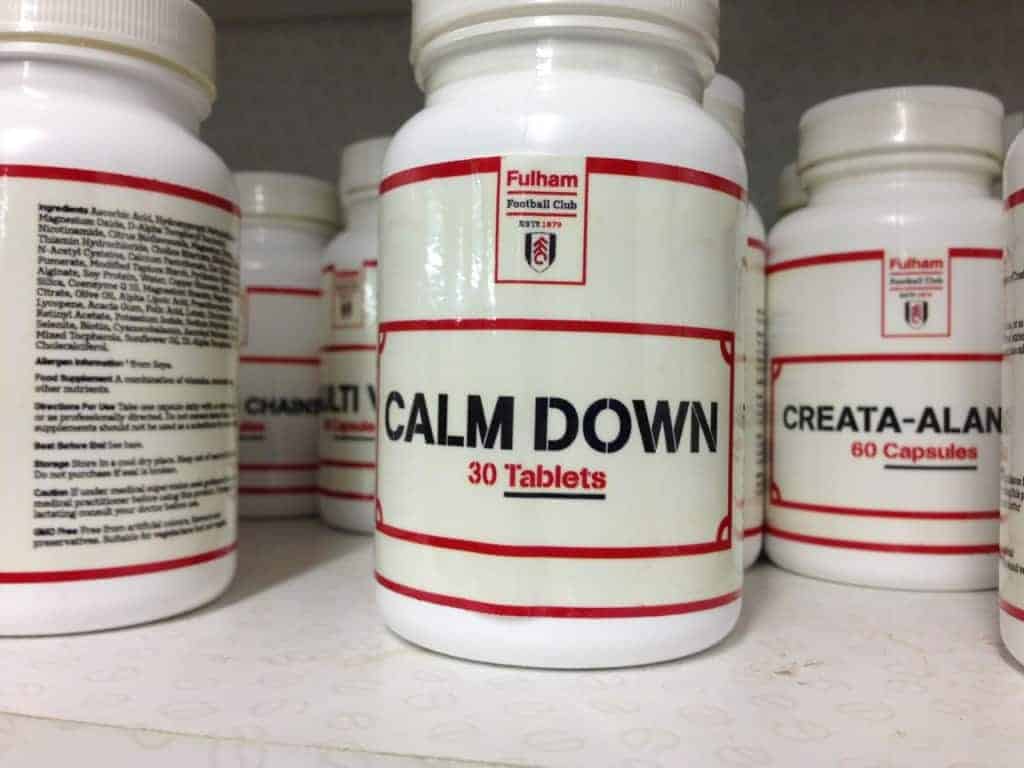 Can I get a case of this one to go?

Stadium tours are a great addition to a soccer tour of England, and I highly recommend them. I especially recommend touring Fulham’s Craven Cottage, as it is a trip back in time to a simpler – and yes, calmer – time in sports.