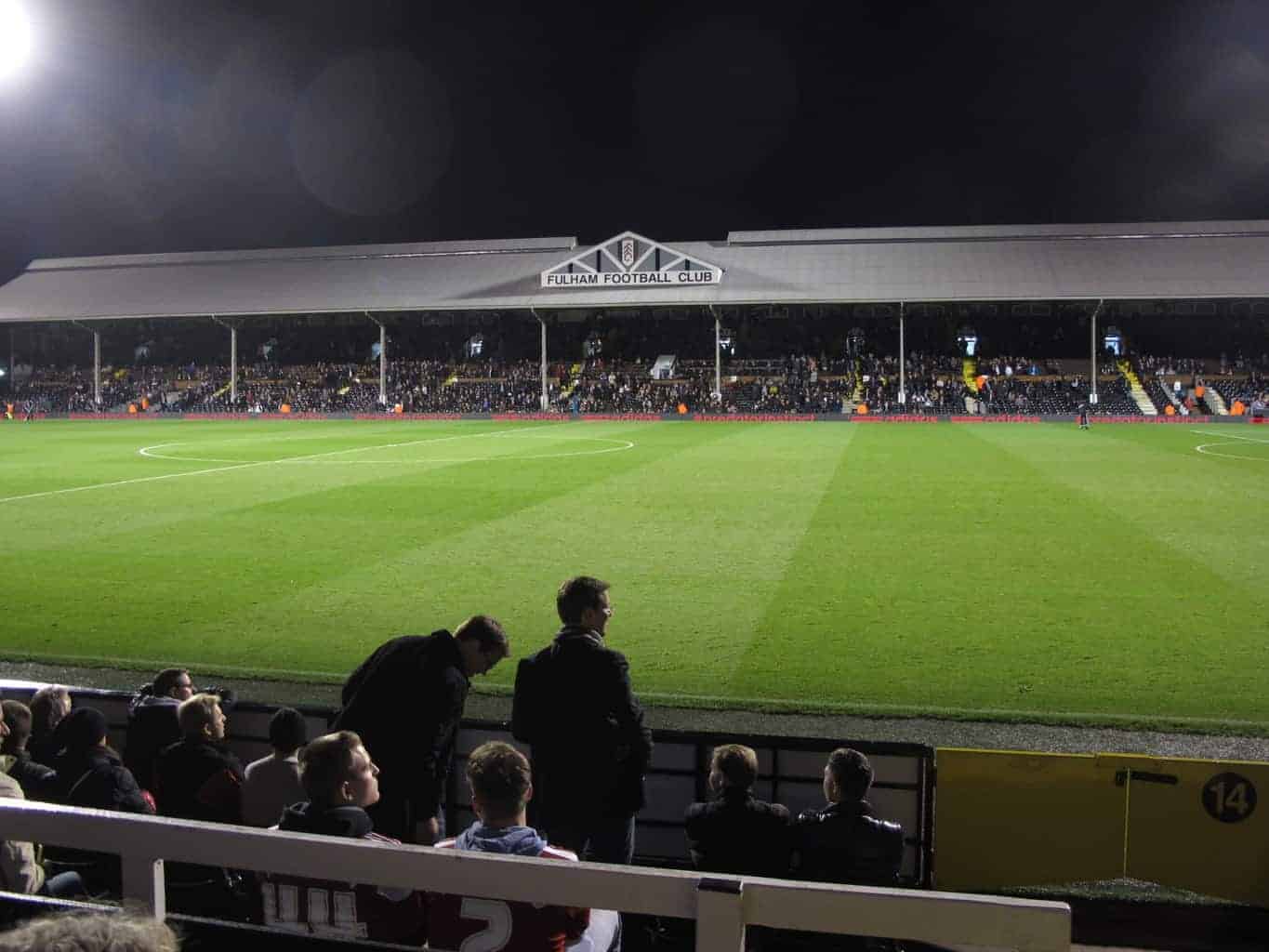 Going to a game at Fulham is among the more civilized experiences I’ve had in my English soccer travels.

First, it’s in a lovely and posh area of West London, and to get there from the nearest tube station you actually walk through a park along the River Thames. Second, the ground, Craven Cottage, is about as old-fashioned and charming as you can get. Looking across at the Johnny Haynes Stand from the Riverside Stand, it might as well be 1879! I wonder if anything but the lights have changed. In either side stand, there are hardly 30 rows of seats, and in the Haynes Stand, many are still wooden! 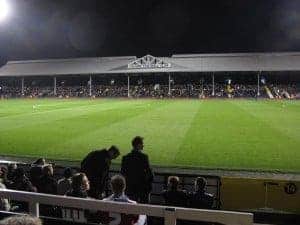 Waiting for the game to start, I was wondering what decade it was. 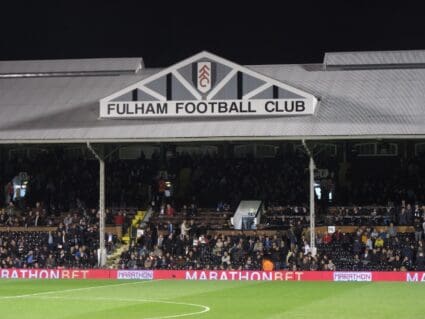 Detail of the historic Haynes Stand.

Even on this night, which was technically a London derby, there was less noise in the ground than any place I’ve been. The visitors, Charlton, were from just across London, but in everything I’ve read about either club, there seems no particular animosity between them. I suppose London is big enough for each to concentrate on clubs in their own end of town: Fulham particularly hate Queens Park Rangers and Chelsea, while Charlton have it in for West Ham and Crystal Palace.

(Note: This post was written in 2014, when both clubs were in the Championship. Now Fulham are in the Premier League and Charlton are in League One. Here’s a guide to all the leagues and cups of English soccer.)

(For a bit more background, I have a post on a tour of Craven Cottage and also a sample chapter from my book on Fulham.) 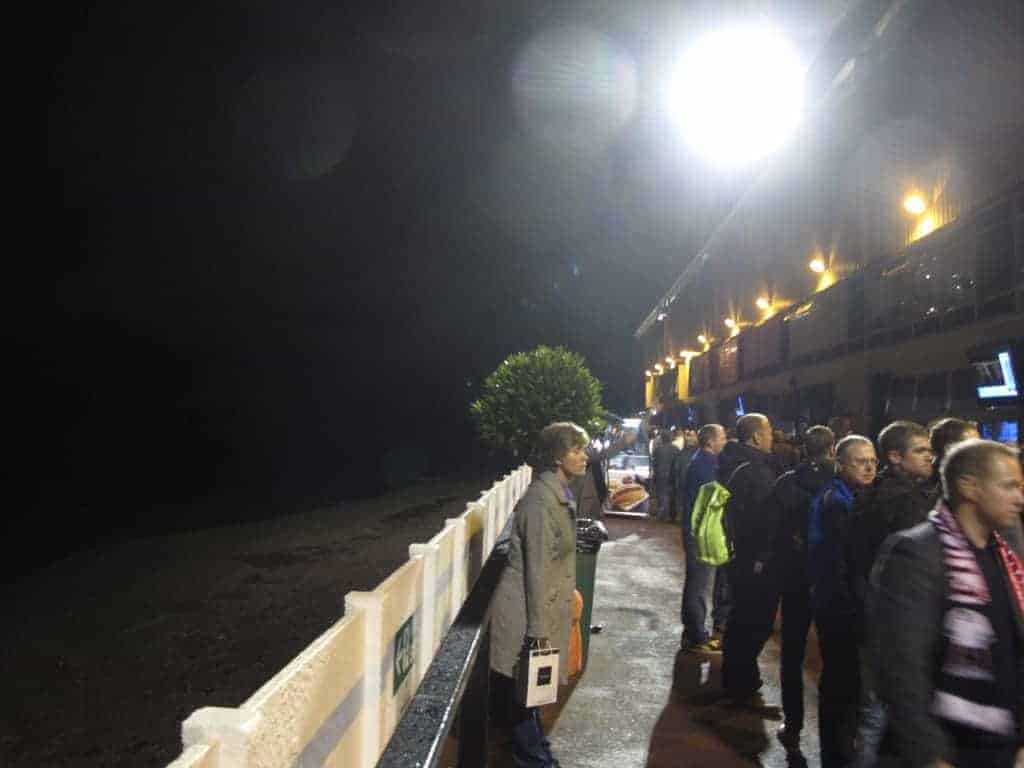 The river, and the Riverside Stand.

We settled into our seats by the banks of the Thames, and I had a proper “Craven Cottage Pie” with a coffee. Looking around at the other fans, I realized they seemed a crowd I am quite used to: I grew up in the world of private schools and country clubs, and if you just mix in considerably more faces of color than I knew then, you’ve got the Fulham home crowd. They even tolerated a couple of Charlton folks in our section.

The main Charlton crowd in the corner were in decent voice, in particular making fun of the Fulham Faithful’s lack of singing. They did “Shall We Sing a Song For You” and “Your Support is Fucking Shit,” and they even threw in a parody of Fulham’s “One Team in Fulham,” changing it to “Shit Team in Chelsea.”

The teams came out to the tune of “Too Good to be True,” which hardly anyone in my section sang. That was before I shot this video.

And when the lineups were announced, the one bit of tension emerged: The Charlton fans booed Scott Parker! I couldn’t imagine why, but they were really into it. Turns out we had free WiFi in the ground (did I mention how civilized Fulham is?) so I looked it up. Turns out he played there for seven years, during which he was an England midfielder and a rising star, then he left for Chelsea. Before he went, there were quotes from his manager that his attitude was lacking in training – and to make things worse, he later showed up at West Ham!

At one point, he fell clumsily (and earned a free kick) right in front of their fans, who poured a “Wanker” chant on him, then sang “One Greedy Bastard.” They also sang something about him being a cunt! Here’s a video of some of it, with a near-miss from a Fulham free kick:

So, oh how sweet it was for us when, in the sixth minute, he scored Fulham’s first! We were happy enough to be ahead, but when the announcer called out the goal scorer, he seemed to pause for a moment, enjoying the moment, then said “Scott …” and with the crowd joining in, fingers aimed at the corner … “PARKER!” Many hands were also waived in the wanking motion, and there was much happiness in the Fulham end.

Even more so when Rodellega made it two about five minutes later! Fulham, just relegated from the Premier League the previous year and now in the relegation zone of the Championship, were alive and kicking. And then it started to rain, heaping misery on the red-clad visitors in the corner. All they could do was sing, “2-Nil, and You Still Don’t Sing.”

The rest of the game was an entertaining, but not thrilling affair. Charlton hardly threatened, and Fulham looked more likely to score. Most of the entertainment came from the supporters banter, and some people in our section heckling players. One was named Solly, so a guy yelled “Solly the Wolly,” and Solly turned around and smiled! Another one had a haircut like Neymar, so we called him that all the time.

Here’s a look at the rain:

When Charlton started falling apart, booting passes out of bounds and falling down, we had a good time reminding them of it. We also enjoyed trying to think of what their truly awful orange-and-yellow uniforms reminded us of: Some said fruit salad, other suggested an unripe mango. I thought they looked like one of those ice-cream pushup deals.

One highlight was Dan Burn, our giant center-back, unleashing a bomb of a clearance that hit the roof of the Johnny Haynes Stand, and came within 20 feet, I’d say, of making the street! Another time our man McCormack made a nice move at the top of the area and lashed into a shot, vaguely towards goal … and it nearly hit the scoreboard!

Charlton pushed ahead, to no avail, and when Rodallega got another to make it 3-0, the party was on, such as it was. The “ultras” down in the Hammersmith End suddenly got up and started singing, and the Charlton folks chimed in with “We Forgot That You Were Here.” 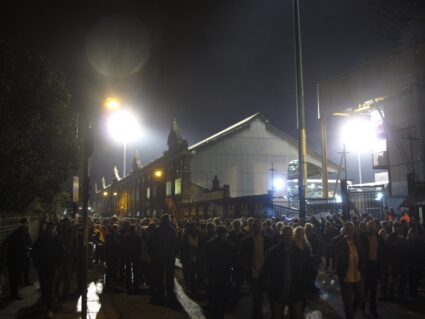 Fulham finally won it, 3-0, and as David and I made our way back to the station, we entertained ourselves counting Aston Martins and Porsches and Bentleys, and David marveled at the size of the houses. We even walked past tennis courts on the way, a first on my footy tour.

Even the ensuing clusterfuck on the District Line – a signal outing, us taking the wrong train briefly, having to resort to a taxi to Victoria, not getting home til nearly Midnight – couldn’t take the shine off my first visit to the Cottage to see my adopted Whites. The next morning I would take an early train to Sunderland, one filled with Arsenal fans, and collecting their congratulations for the win just capped it all off perfectly.