“Stadium” vs “Ground” in English Football

What is the difference between a stadium and a ground in English football?

This is something I thought I had all figured out; ground is simply what British people call a stadium. Not so, I am beginning to understand. As with many things, it’s a bit more complicated than that.

Carrow Road in Norwich is what you’d call a football ground.

One way of getting at this is to think of a stadium as a thing and a ground as a place. So a ground is where you would find a stadium, as well as a pitch and a carpark and club offices, etc. The stadium, then, is just the thing people sit in to watch the action on the pitch — and all of this happens at the football ground.

But I have heard another, subtler way of looking at it. I asked someone today about where to eat down by the Crystal Palace stadium, and she said I should use football ground instead. Her explanation was that Sulhurst Park, home of Crystal Palace, is a football ground because it is a place in a neighborhood. So, for example, although she is not a football fan, she knows exactly where Selhurst Park is, and she can use it as a reference point or landmark. 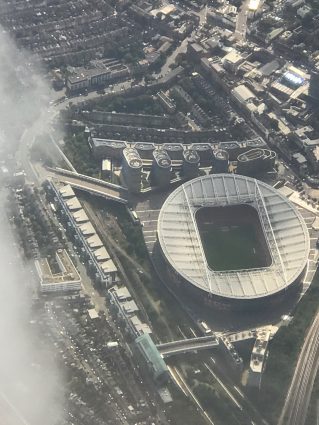 The Emirates Stadium, home of Arsenal FC, from a flight into London. Not exactly on a high street.

“Something like the Emirates,” she said, “now that’s a stadium.” Seems the thinking goes like this: a ground isn’t as grand or modern as a stadium, and it’s rooted to a part of town — indeed is part of the community. But a stadium like The Emirates is something recently built, with nothing else around it really. Another person in the conversation said, “Right, so Wembley is a stadium, but Selhurst Park is a football ground.”

Maybe the best way to explain this is that a football ground is a place you might walk past on a non gameday, to get a pint or something. But you would never, in your ordinary life, just find yourself walking past a stadium like Wembley or the Emirates.

At least, I think that’s how it is. For now.