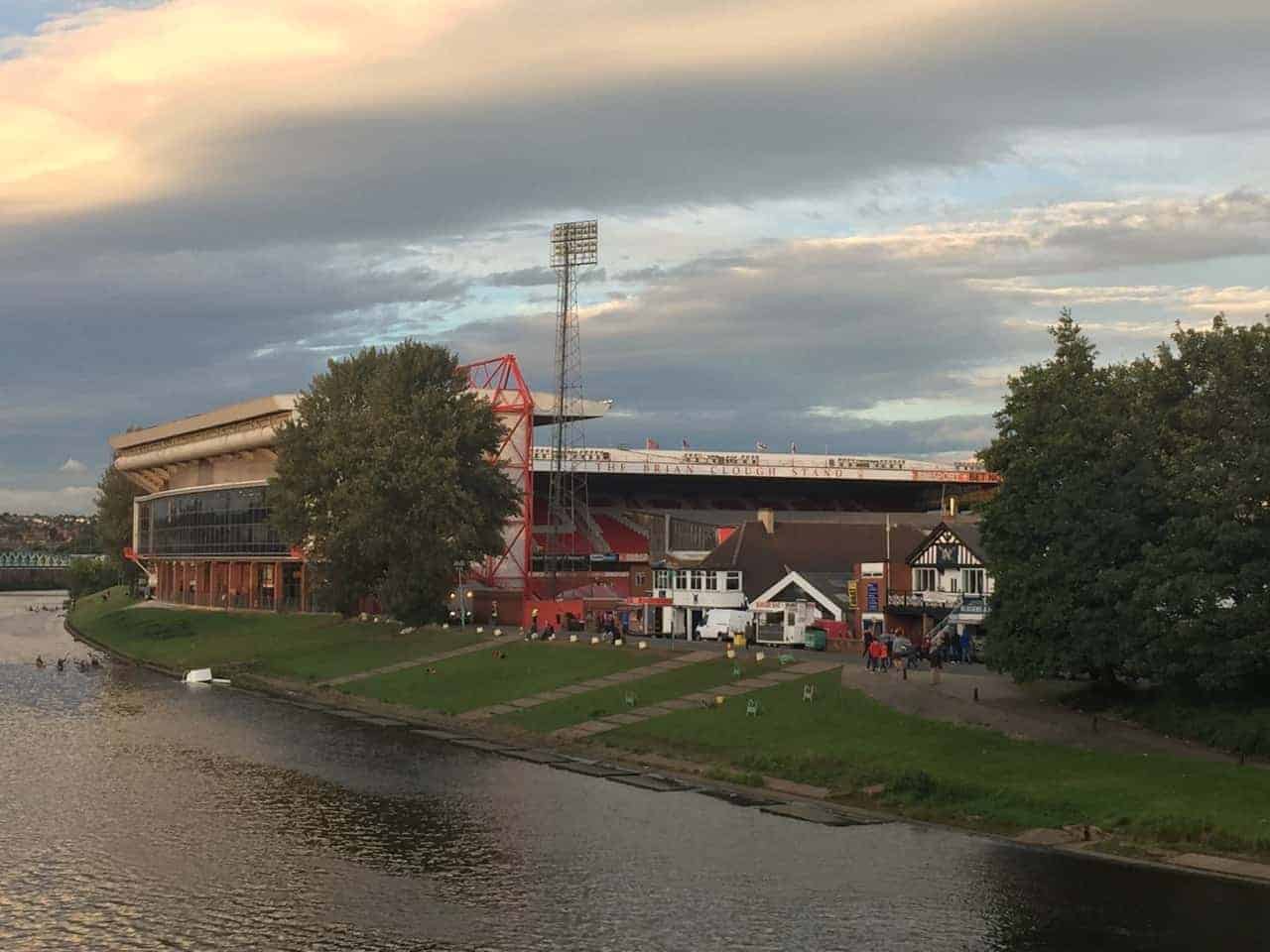 If you knew nothing of English soccer, and you happened to come into contact with Nottingham Forest Football Club today, you might come to think their history began in about 1977 and essentially ended sometime around 1990. 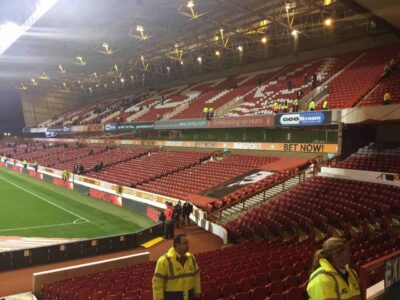 And these days, you might further conclude, fans of the club get together once a week or so to reminisce and enjoy an essentially meaningless exhibition game.

I am being harsh, of course – but truly, if you read their fanzines and blogs, visit their stadium and poke around the club shop, there’s really no mention of anything outside those dates. I suppose Forest, as they are known, didn’t do much before then; they certainly haven’t done much since.

Combine this, plus the big-money takeover of the game they are not a part of, and throw in a typically dour English attitude toward things, and you have essentially a sentimental club that stages mediocre football.

Get to Know Forest 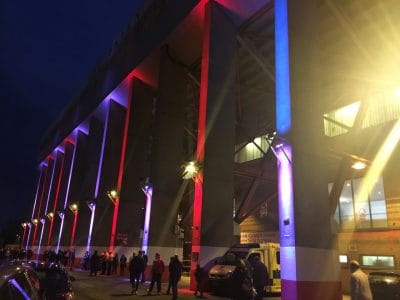 Let’s first get the basic history out of the way.

In the late 1970s, Forest hired two men to build their squad and run the club: Brian Clough (“cluff”) and Peter Taylor. By all accounts, Clough was a genius at tactics and motivation, and one of the great characters in the game’s history. Words like “acerbic” and “biting” and “entertaining” are often tossed around. He was known for quotes such as, “When I go, God will have to give up his favorite chair.”

Taylor, meanwhile, comes off as the voice of reason and calm, with the unfailing ability to spot and attract talented footballers who fit Clough’s system.

Here’s a famous interview clip with Clough in action:

The thing is, he comes off as kind of a condescending jerk … but he’s also right, isn’t he? About the media’s role? And this was 40 years ago! 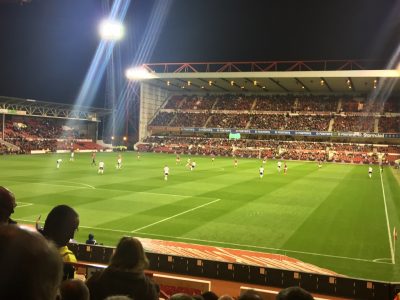 The Trent End, seen from the visitors’ section.

Anyway, Clough and Taylor took over a team struggling in the Second Division (now called the Championship) and got them into Division One. Then they won that. Then they won the European Cup – twice! Perhaps you’ve heard of Leicester City’s dream run to the Premier League title last year? Well, imagine they nearly defended their crown, then went off and won the Champions League, all the while with a manager who condescended to the media, snapped off casual insults toward opposing managers, and essentially held everyone’s attention at all times. And then they won the Champions League again! That was Forest in what they now call The Miracle Years, under Clough, whom they sometimes call a god.

By the mid-80s, Clough’s power was fading, his alcoholism was becoming an issue, he started to alienate everyone around him, and he coasted into the early 90s, retiring as an all-time legend on a day when mighty Forest were relegated from the Premier League. Still, he looms over the club like Bear Bryant did over Alabama, until they found Nick Saban, and like Vince Lombardi did over the Packers until they started winning again in the 90s. The most common attire I saw among their fans is an old-school Adidas track suit, like the one he wore, the equivalent of Bama fans wearing a houndstooth hat to games.

If you want to go deep into the Clough story, and see why it holds such power over Forest, here’s a documentary that I found revealing and entertaining:

In the 24 years after The Man left, Forest had 18 managers, bounced around between the top two leagues, mostly settled into the Championship, and won exactly nothing. Fans gather each week in the Brian Clough Stand, where his face adorns a banner over unsold seats in the corner, and they seem to (barely) cling to a hope that is tempered by the reality of how poorly run the club has become. Or maybe how much money, which they lack, now dictates success. Watching their rivals Leicester dance around with the trophy, and seeing Bournemouth, Swansea, and Burnley in the Premier League, must be a tough pill to swallow. 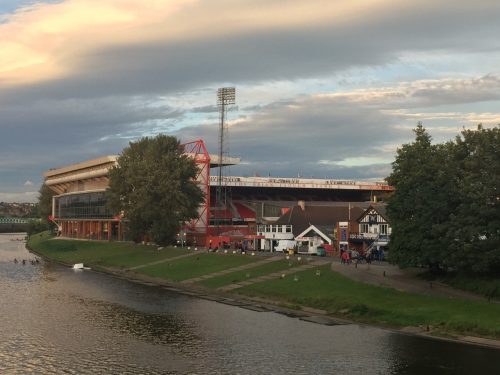 I tell you all this because I try to give my readers a sense of what a place feels like, and because it is my sincere hope Forest will make it back to the top. This hope went up a notch when I joined the red-clad throngs walking across the Trent Bridge and saw City Ground off to the left – certainly one of the great approaches I’ve experienced during my tour. 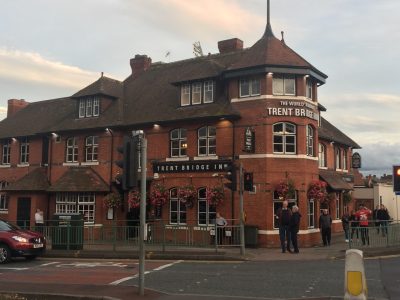 Immediately across the river I saw a centuries-old pub, the Trent Bridge Inn, with several others nearby, and a lovely walk along the river behind the stadium’s Trent End.

I was running short on time and money, and with no time for a sit-down in a pub, I went instead for “tikka meat and chips” for 5 quid at a counter space around on a side street – planning and cash being something of a theme for the day. It was exactly as tasty as it sounds.

I was dabbling in my half-hearted adoption of Fulham, the evening’s visitors to City Ground, so was sitting in the away end. Fulham, especially on a Tuesday night after a poor recent run of form, doesn’t exactly pack their parts of stadiums. Nor do they raise a particular level of hell. But they show up, they sing, and do a fine job with all the rituals: the grumpy old men complaining about the completely useless number 9, the middle-aged randos paying almost as much attention to their phones, and the three rows of rowdy young men in the back, singing constantly and trying to get everyone else involved. 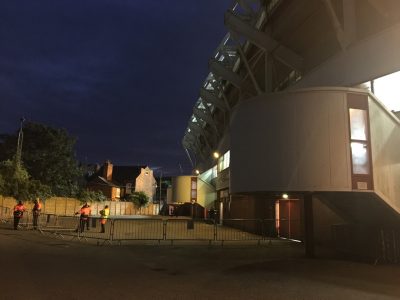 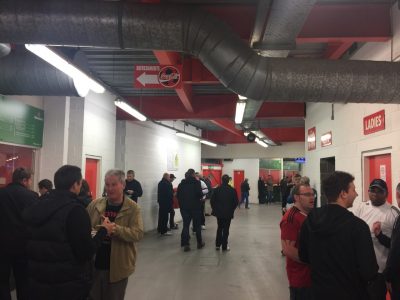 … and tearing it up in the concourse.

The teams came out to a two-thirds-full stadium, and the locals gave a mild effort at singing their anthem, which I couldn’t recognize or even make out and therefore had to look up.

Turns out it’s Mull of Kintyre, which was released by Paul McCartney and Wings in 1977; Forest fans just changed the words to match their glorious travels, and it stuck.

Starting in 2008, the PA system has been playing it to get it started.

The game was pretty entertaining; if either team possessed any class in front of goal it would have been 2-2 at halftime. Instead, it was 0-0 – although it must be said that Forest’s striker Nicklas Bendtner cracked an absolute cruise missile of a strike off the crossbar from what seemed like 45 yards. It was astonishing; Fulham were fortunate. 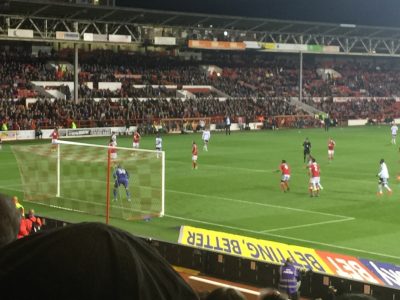 About to blow another corner.

Bendtner finally got one in the second half, as did Fulham, the goal coming from Tom Cairney, about whom my neighbor (a semi-grumpy old man) turned to me and said “It’s about damn time ‘e put Cairney in the middle! ‘E should have been there all season!” I nodded as if I agreed, or even understood, and then decided that maybe I should stop saying I “follow” Fulham, since I definitely couldn’t have picked out Cairney on the pitch, and I had to keep the lineups on my phone to try and learn “our” own players.

Here are the highlights, which I enjoy for not having any commentary. I also get to relive that missile off the bar from Bendtner.

It ended 1-1, with enough good chances missed for a 6-5, and we all stood and clapped politely. And Fulham’s players, some of whom had had their commitment and manhood called into question repeatedly by their own fans, came over and clapped back at us. 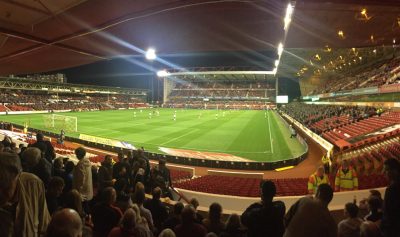 Forest’s players, meanwhile, did one of those “loops” where they really just wander around the center circle, clapping generally towards the stands. And then we filed out – Fulham’s folks back towards London, Forest’s back into the neighborhoods, and I onto a bus where a few Reds agreed that if they had played a better team they would have been swamped.

It was during this game that I wrote an entire blog post about the Characters You Will Meet at an English Soccer Game.

During the game, news broke that Sam Allardyce had resigned in disgrace as England manager after one slim victory and an embarrassing undercover sting, and none of the fans seemed too surprised or concerned. I guess after a few decades of going nowhere, it doesn’t seem like news to find out the train is off the tracks again.

As for the once-mighty Forest, and Fulham – who next week will unveil a statue of a former player who was on the 1966 England World Cup Champions – they sat 13th and 15th in the Championship after the draw, neither looking like they would be going anywhere higher any time soon.

At least we all have the Miracle Days to remember.