Birmingham City are one of several teams in England’s second city. And while they’ve been stuck in the second-tier Championship for some time now, for the neutral they are a fun and easy club to check out. Here is a report from a game I saw there in 2015. 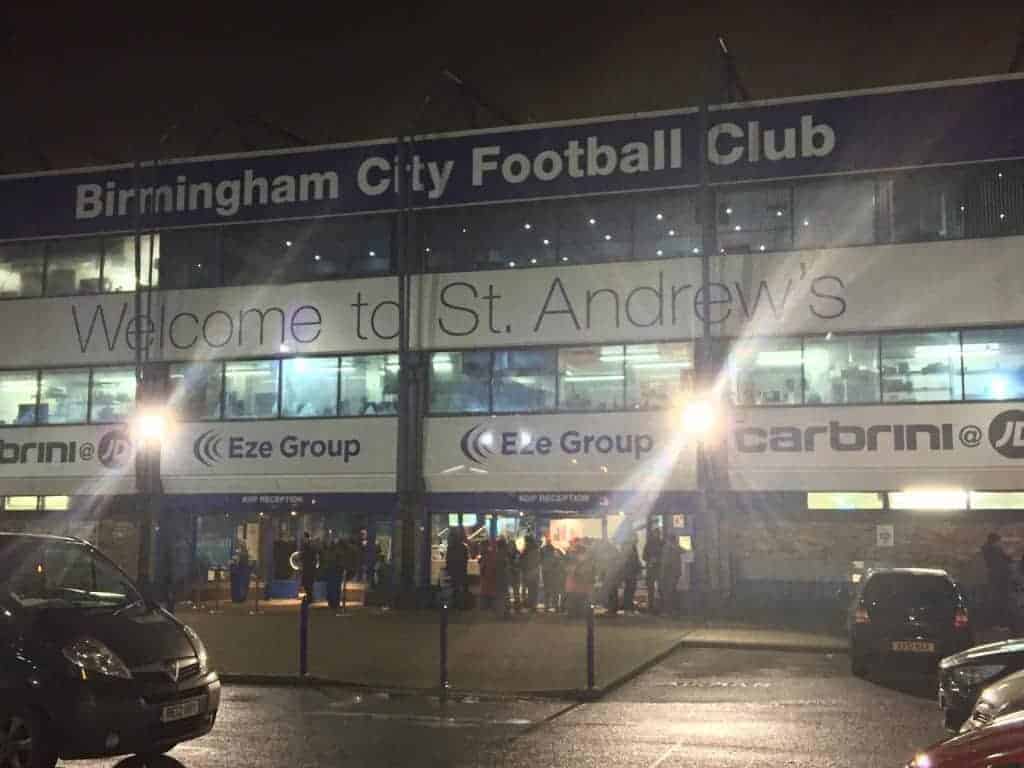 Walking out of my hotel in Birmingham, bound for Birmingham City Football Club, I asked a staffer hot to get to the ground. He gave me what turned out to be mediocre-at-best directions, then asked how an American came to be a Blues fan.

He smiled and said, “In that case, I apologize for pointing the way like this” … and indicated that he’d been using his middle finger!

“Villa, Wolves or West Brom,” I asked. The four Birmingham-area clubs really hate each other.

“Villa,” he said. He then accepted my condolences — they were beyond awful in 2015 and wound up getting relegated — gave me a wave, and off to the game I went. 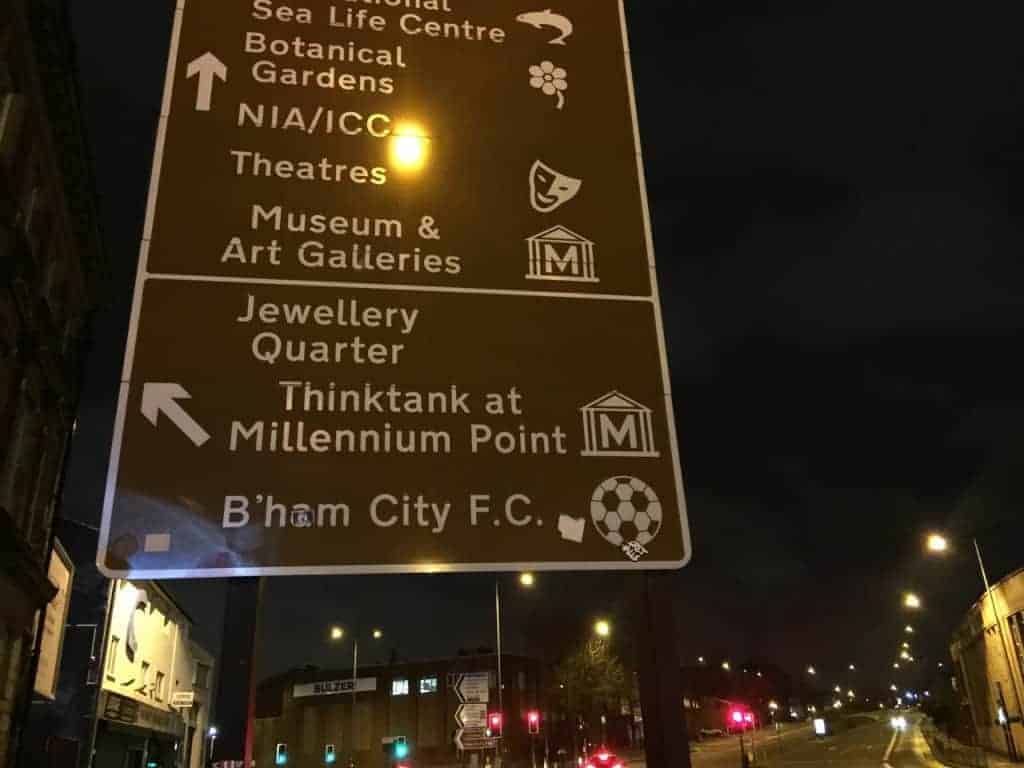 I started through the fancy Chinese Quarter, just heating up on a Friday evening, but soon was in a bleak warehouse district. I wound this way and that, a wary eye on the few other people I saw, until I came back to a main road and walked past a pub called the Old Crown — dated 1368! It was everything you think a pub should be, with wooden walls, low windows, a fireplace, and people huddling close with pints of ale.

I then passed something called the Irish Club, which seemed to be a pub with event space. Outside it was a man yelling, in a thick Irish accent, at two bemused looking security men. “We run this fecking place … We’re Irish!”

So Birmingham seemed in the mood for a game. Not that they had much to be excited about: The Blues have won exactly one trophy in 140 years! Compared to the illustrious (though now horrible) Aston Villa and West Brom, they are the third team in England’s second city.

Near the ground, I saw stands selling blue Santa hats, and I thought about the Everton fans I’d seen on TV wearing the same. Must be a good business in blue Santa hats all over the country. 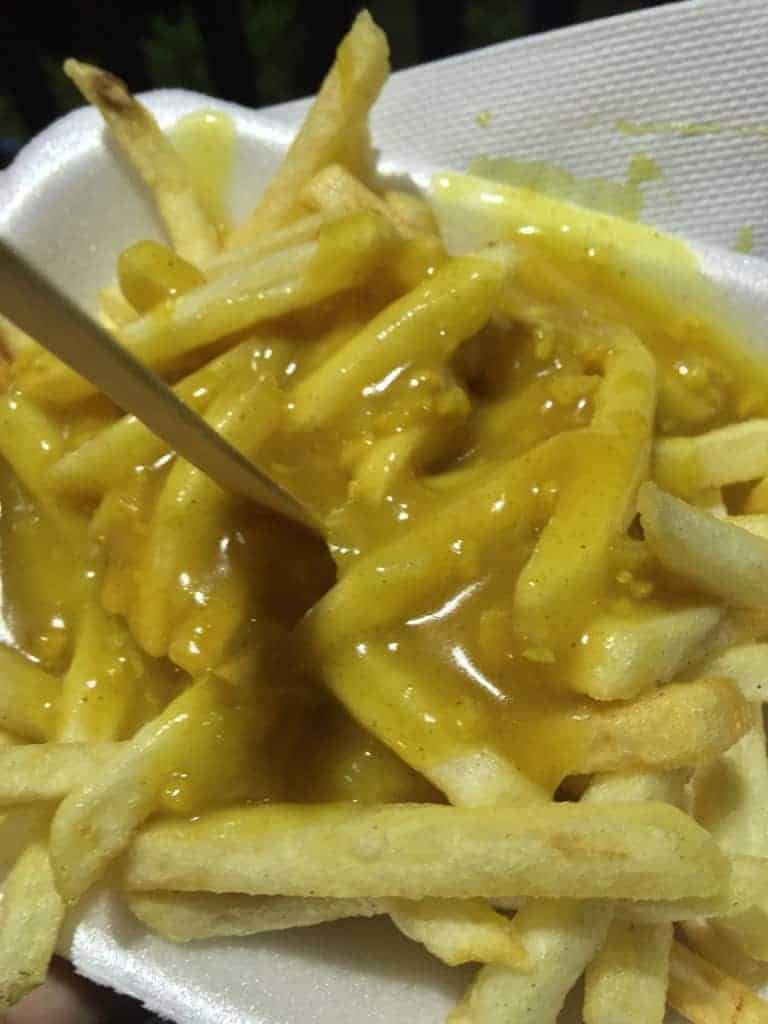 Hey, at least it was only two quid!

Searching for local cuisine, I grabbed a curry and chips from a food truck for two quid; it was awful, but hey — at least it was cold, too.

I got my program and badge at the “Super Store” and went into the ground, where I got the Pie Meal: six quid for a chicken balti pie (local specialty curry), soda and candy bar. When I ordered it, the girl behind the counter looked at me funny, and I realized she hadn’t understood my accent! Fair enough, I thought.

There was a smattering of Cardiff fans in the end to my left, many in Santa outfits, but the place was mostly empty. I think the crowd was 14,000, lowest of the season in the nearly 40,000-seat stadium. Considering how far Cardiff is, and the fact the Blues hadn’t scored in six of their last seven games, I could see why. The atmosphere was non-existent outside the visitors’ area. 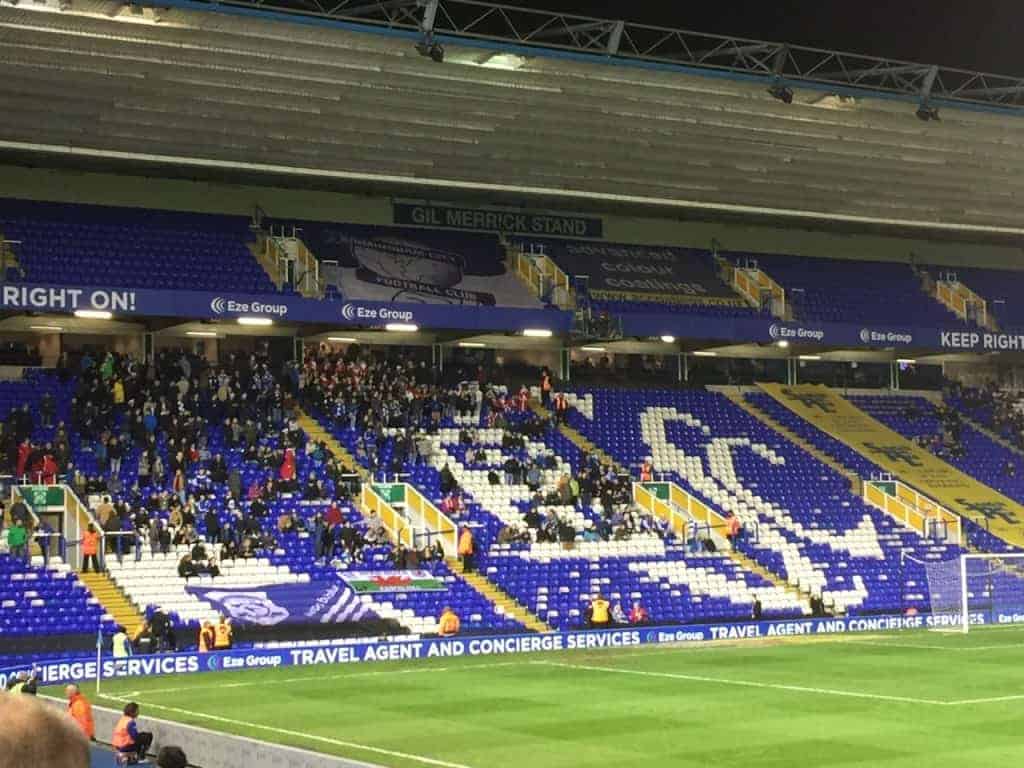 Cardiff fans, not expecting much.

Right before the game, one of the Santa-clad Cardiff folk ran onto the pitch, gave a wave to his fellows in the stands, accepted their cheers, and then was carted off by the stewards — presumably out of the stadium. Somebody behind me said that isn’t much to miss a match for, and then the guy next to me turned my way and said … something. Didn’t catch a word, actually, so I just smiled and nodded. This Midlands accent is tough! 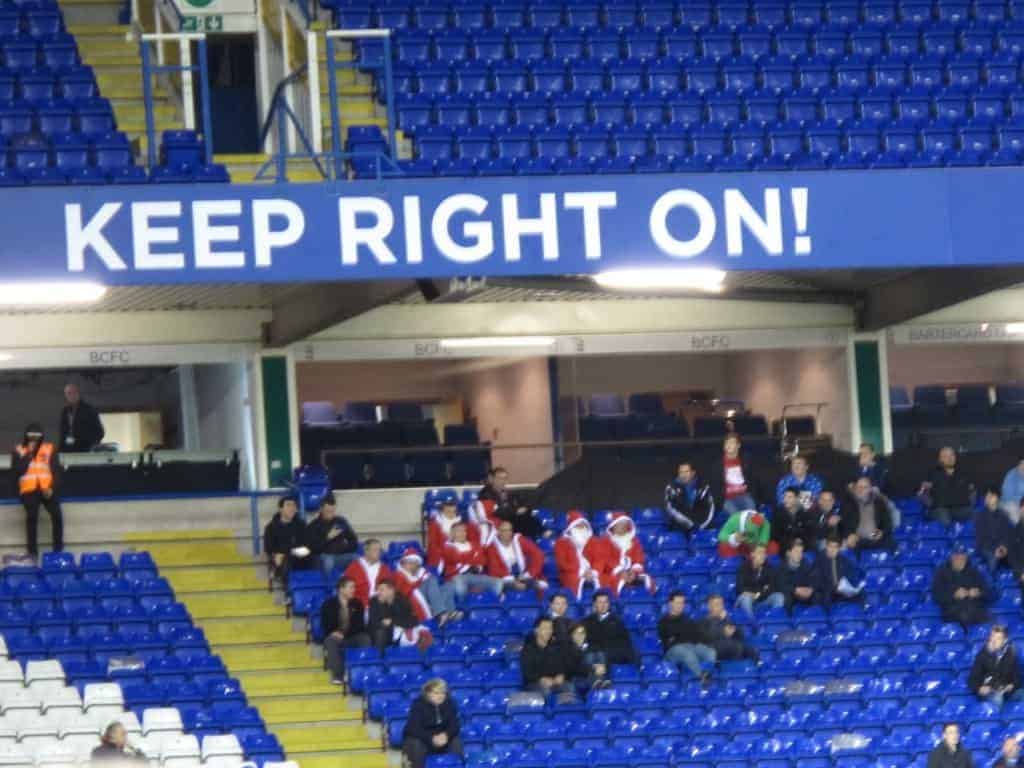 Cardiff worked through a few songs in the early goings, including something that sounded like “Full of shit,” the usual taunting of the home support (“Shall We Sing a Song for You,” “Is This a Library,” etc.), and something that included the phrase “you English bastards.” 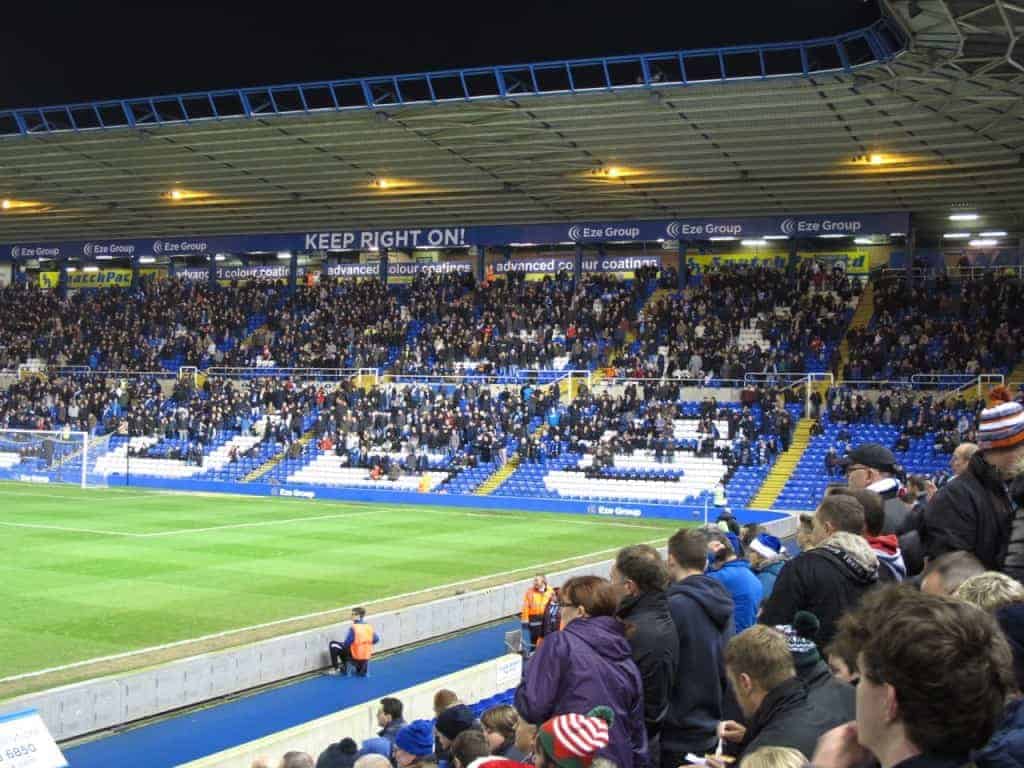 The game, meanwhile, was dreadful. One of those where I thought a good MLS team could hang with them. (How do MLS teams compare with English teams?) Cardiff looked like they might eventually score, perhaps sometime in the morning, but the home side … nothing — until, that is, there was a scramble in the box and the referee pointed towards the spot! Nobody seemed clear on what had happened, except that all from Cardiff were incensed. The Blues man put it away, and soon after the ref blew for halftime.

In the bathroom, I heard one man say to another that he had a text from a friend watching on TV; apparently the ball hit the Cardiff player in the face, not the arm, and the penalty was a joke. So he said, “Looks like we have a good ref!” At the start of the second half, the home fans, many of whom I suppose had also received texts, clapped the refs back onto the pitch. The visitors expressed a different opinion.

Meanwhile, I had a better halftime meal, including another local specialty, the chicken balti pie: 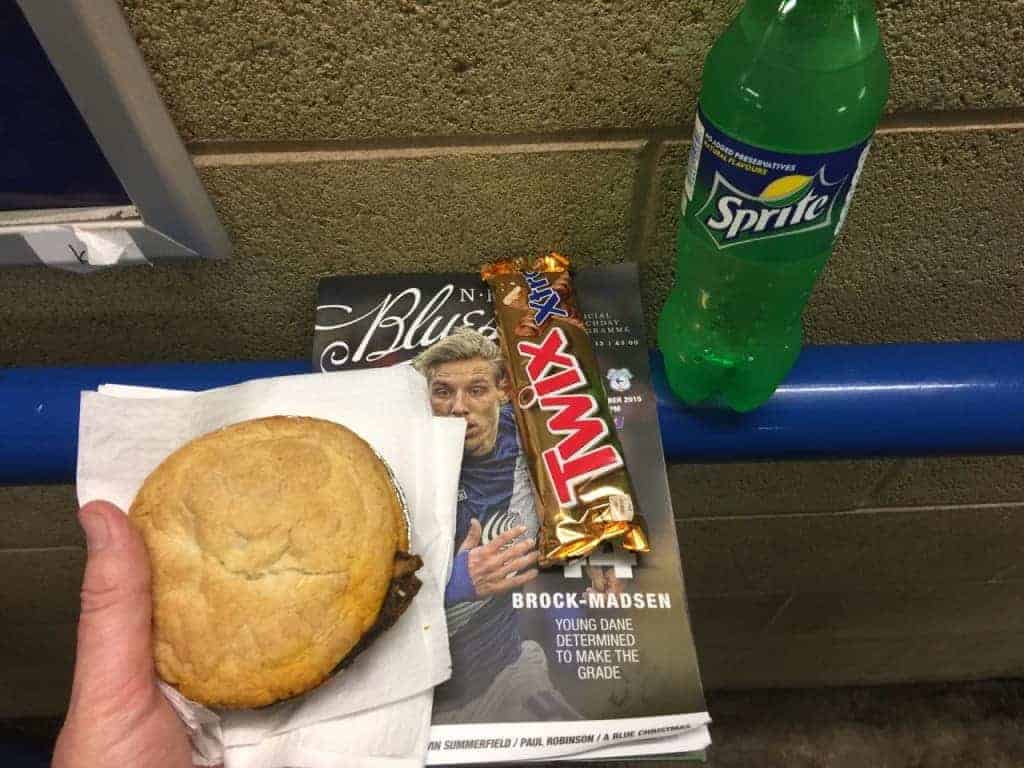 A pregame meal for non-drinkers with a terrible diet.

The second half was a bit better, but the only real highlight was a Cardiff sub who was booed mightily, and I thought he must have played for Villa or West Brom at some point. The home fans even cranked up that old classic, “Shit on the Villa,” as well as another I couldn’t make out.

There were a couple of nice saves in the second half, but no more goals. Cardiff were clearly better, and when it ended the home fans stood up, clapped briefly, and scurried out — aware, no doubt, they had stolen at least two of their three points.

Here are the highlights, including the non-penalty:

As for me, I snapped a few more photos after the crowd left; it’s actually a lovely stadium. 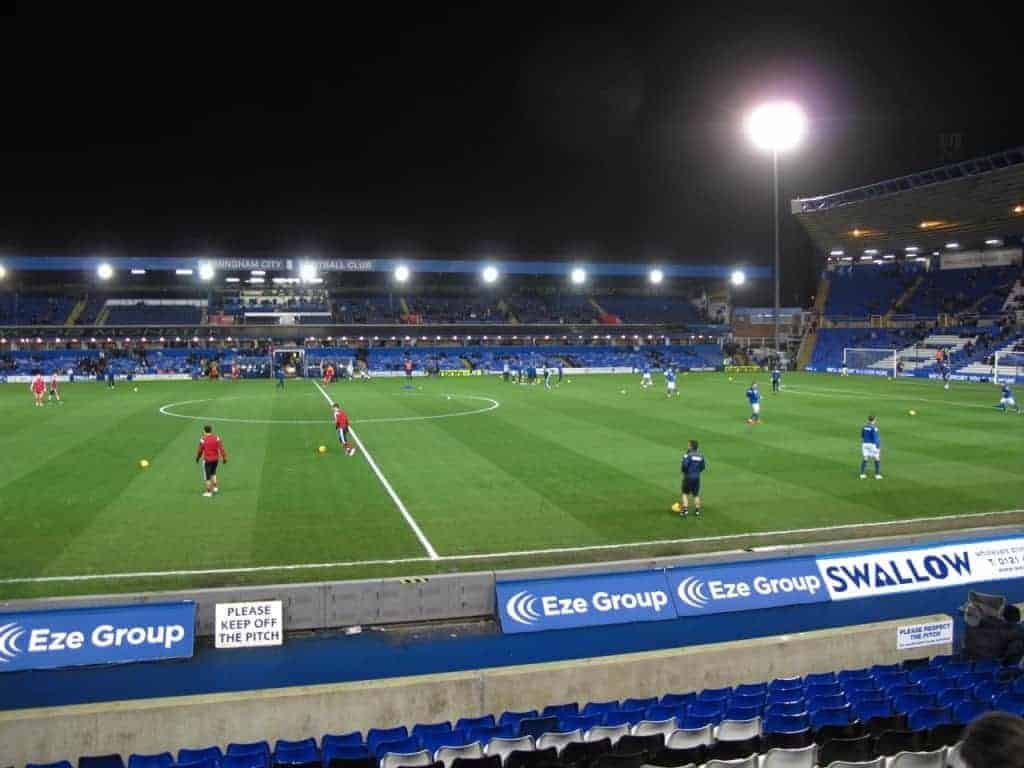 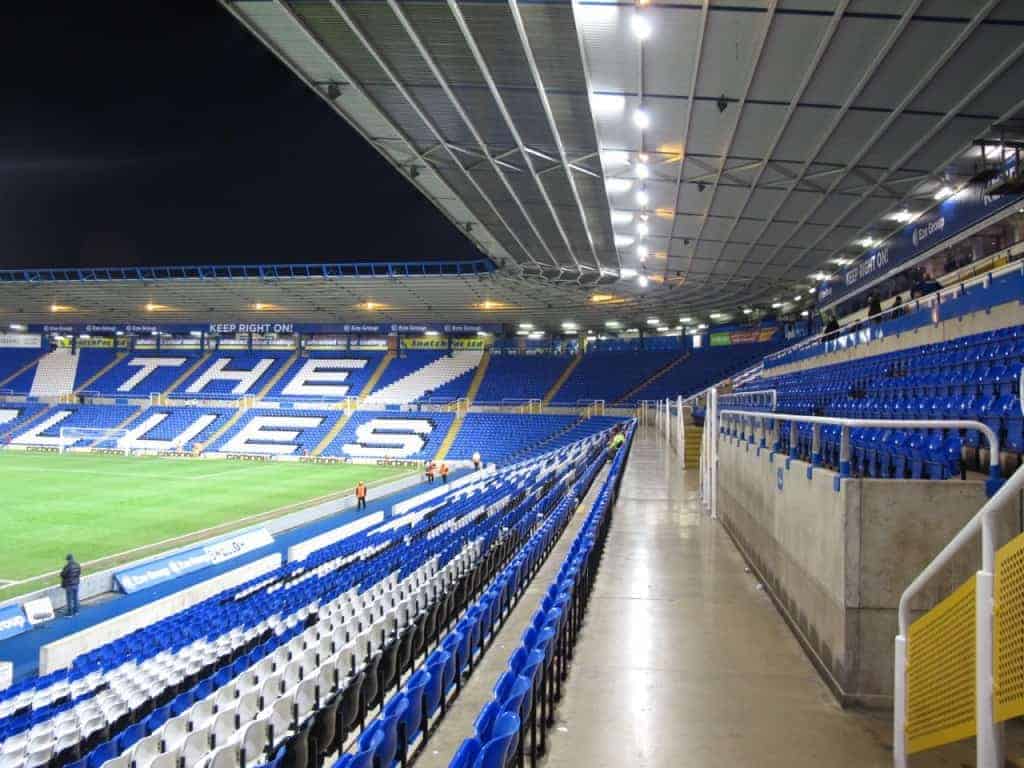 Then I walked back to town, this time sticking with the crowds and finding a much better route. It seems a happening place, Birmingham, at least in the center. It’s young and insanely multi-cultural.

That is to say, off the pitch it’s cool, and I enjoyed the hotel (and its staff) immensely. On the pitch, I’ve been to four games in the area and seen a total of three goals from the home side and just this one win.

So let’s hope the rest of this little tour provides some better footy action. With the next day’s fare being Fulham at Bolton, I can’t say my hopes were very high as I boarded the morning train for Manchester. (Postscript: It wasn’t much better!)