Paul loves touring English soccer stadiums – as much to meet the tour guides as to see the actual stadiums. Here’s his experience at Birmingham City.

There is just no denying that, of the four big clubs around Birmingham (City, Aston Villa, West Bromwich Albion, and Wolverhampton) the Blues are, shall we say, a second-tier club.

That’s their trophy case in the photo below. They’ve also been in the second-tier Championship far longer than West Brom and Villa, so it’s not too surprising there’s a bit of defensiveness and “little brother” complex to the place.

Our guide was a lovely man who insisted that, yes, City have won things! Here he is, holding a replica of the League Cup, which they won in 2011 – and which, he proudly stated, made Birmingham City the only Midlands to club to win a major trophy at Wembley this millennium! Okay, then. He also reminded us they were the first British team to play in a European competition (1956) and reach a European final (1960), which they lost to Barcelona. 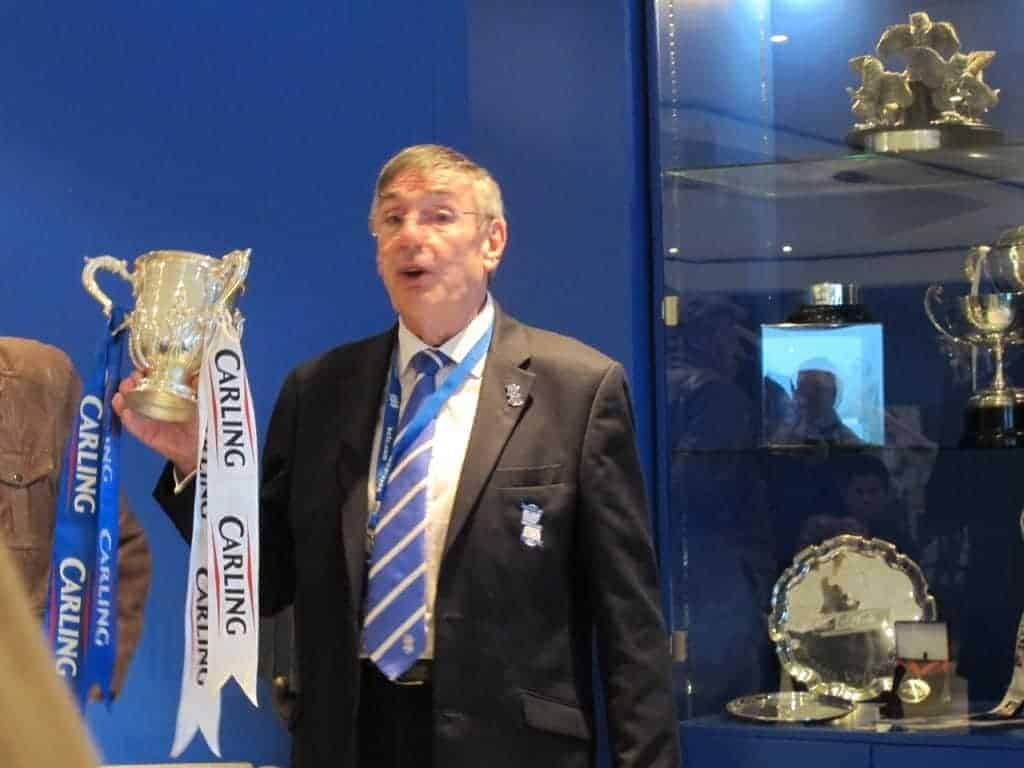 In fact, earlier on my trip I saw them actually win a game, 1-0 over Cardiff.

He took the occasional shot at the local rivals, all in good fun. He reminded us that City were the first club around here, but he also shared the story of the Gypsy Curse, which supposedly has haunted them for 100 years after they crudely ran off a bunch of gypsies to make the stadium. (You’ll get a fuller and better version of this story on the St. Andrews tour.)

Other than all of this charm, it’s a pretty standard stadium tour. Here are some memories and images: 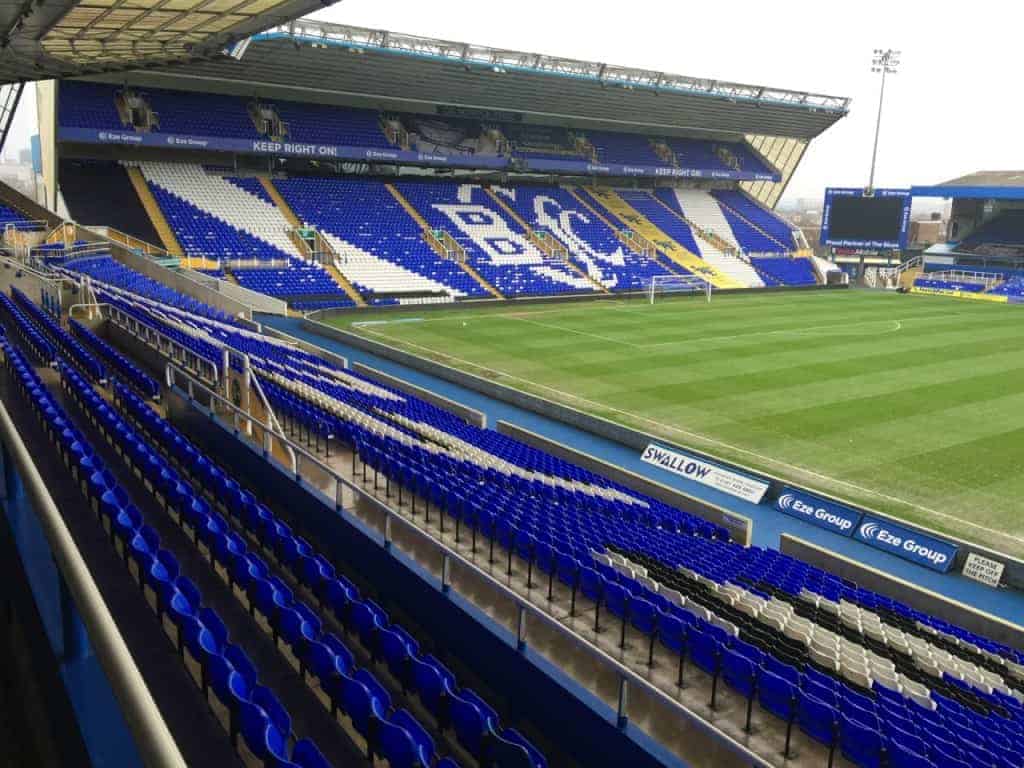 Away fans sit in the far end. 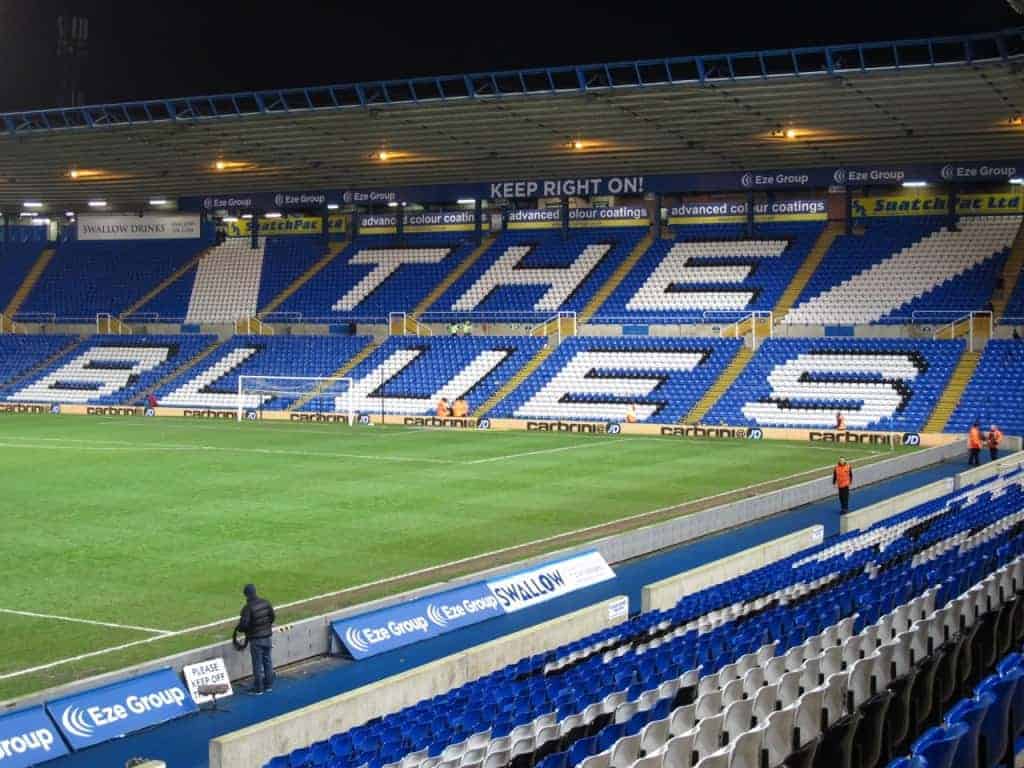 The rowdy home fans sit in this end. 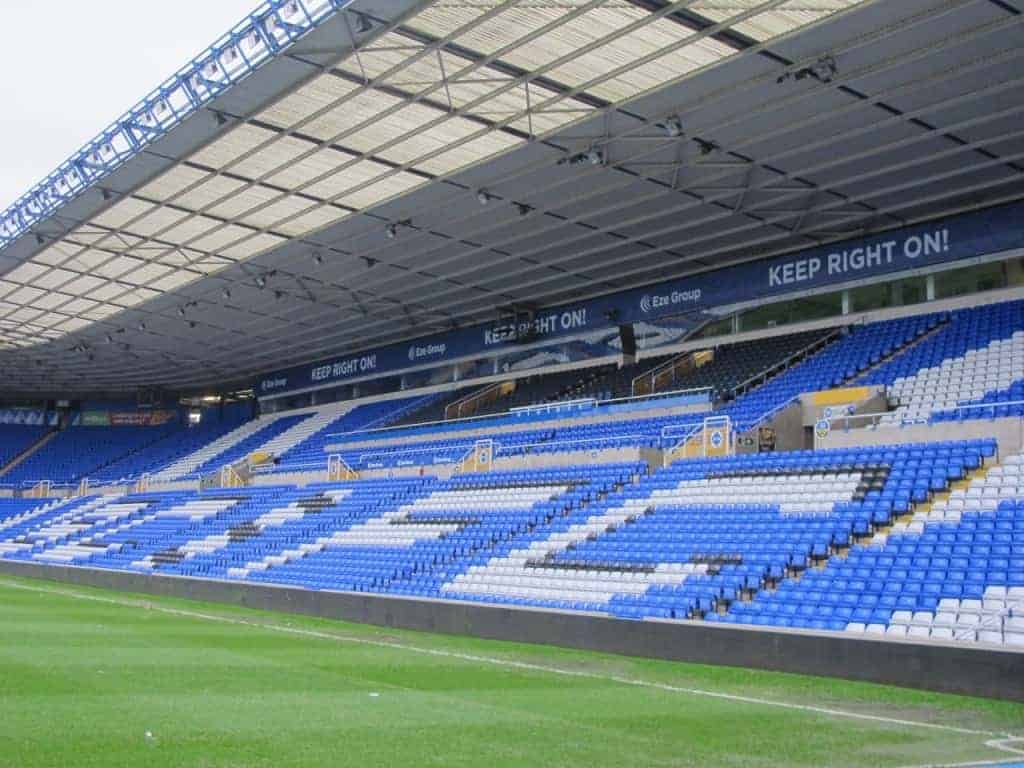 We started in the main stand, where I took the pictures above, and I noticed that one of their sponsors is apparently called Swallow Drinks. I couldn’t help but think, What else would you do with them? (Turns out it’s a beverage supply company called Swallow.) 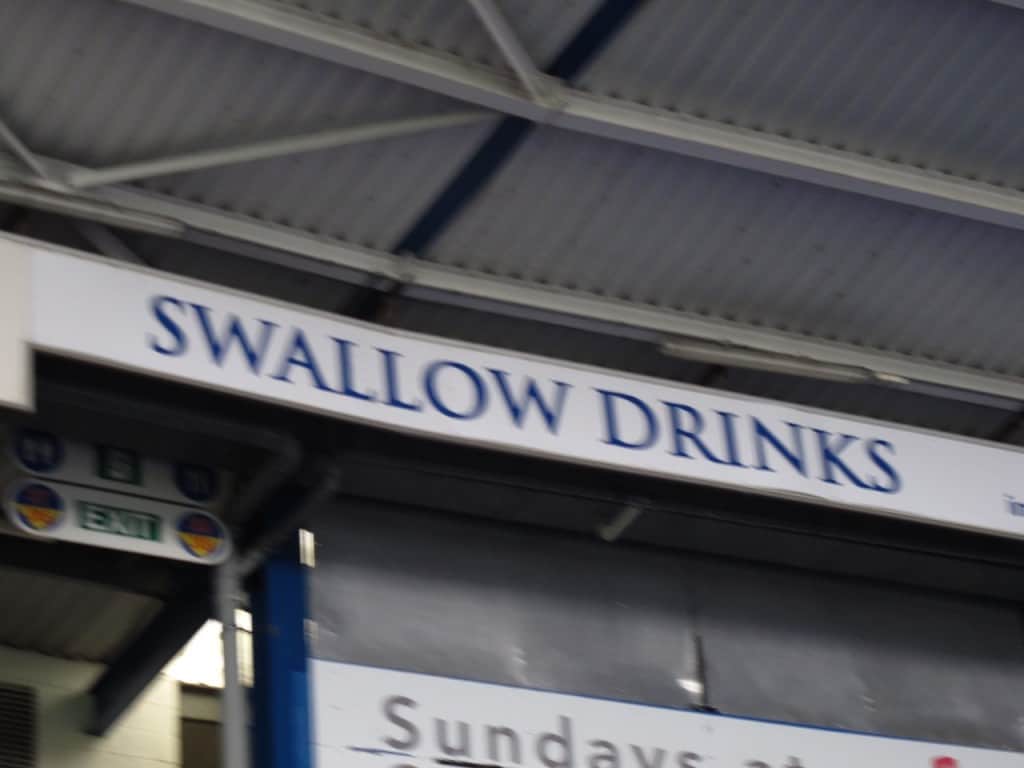 What else would you do with them?

Next up was the mascot room, where he told us two sweet stories: One about how nervous the little tykes get when their “mum and dad” go to the stands for kickoff, and the other about how a visiting manager, when he heard their mascot didn’t get to meet the team, brought the kid into the dressing room and introduced him personally to every single player. Well done to that chap! 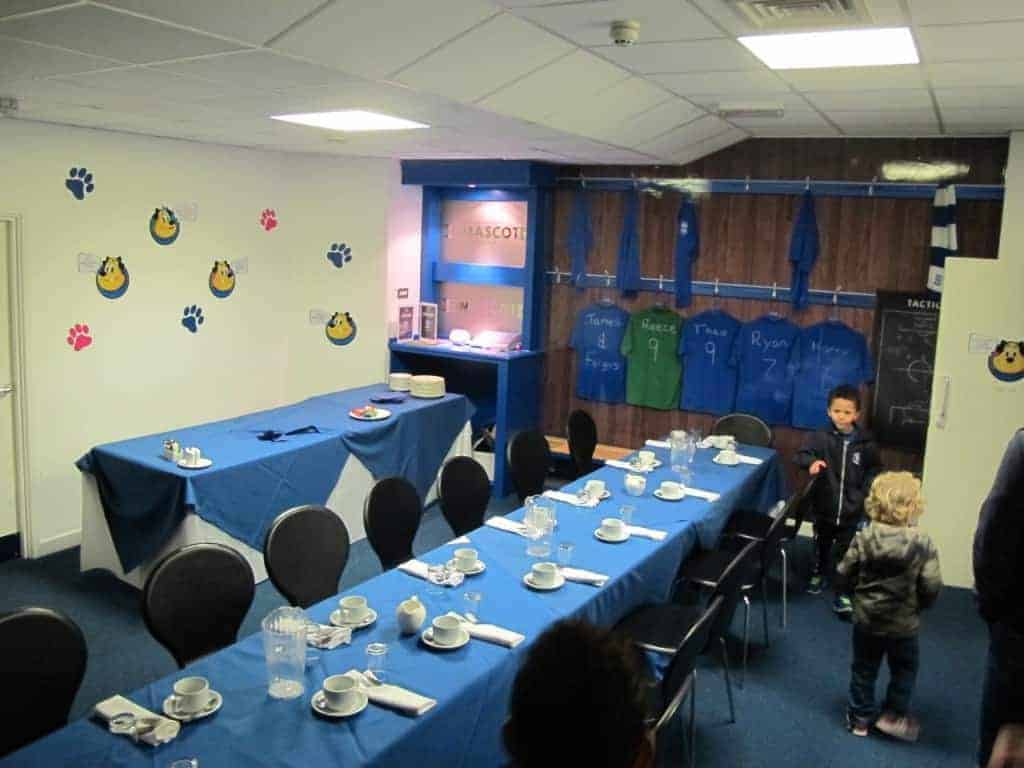 Next was the home dressing room, where everybody lined up for the usual shots. 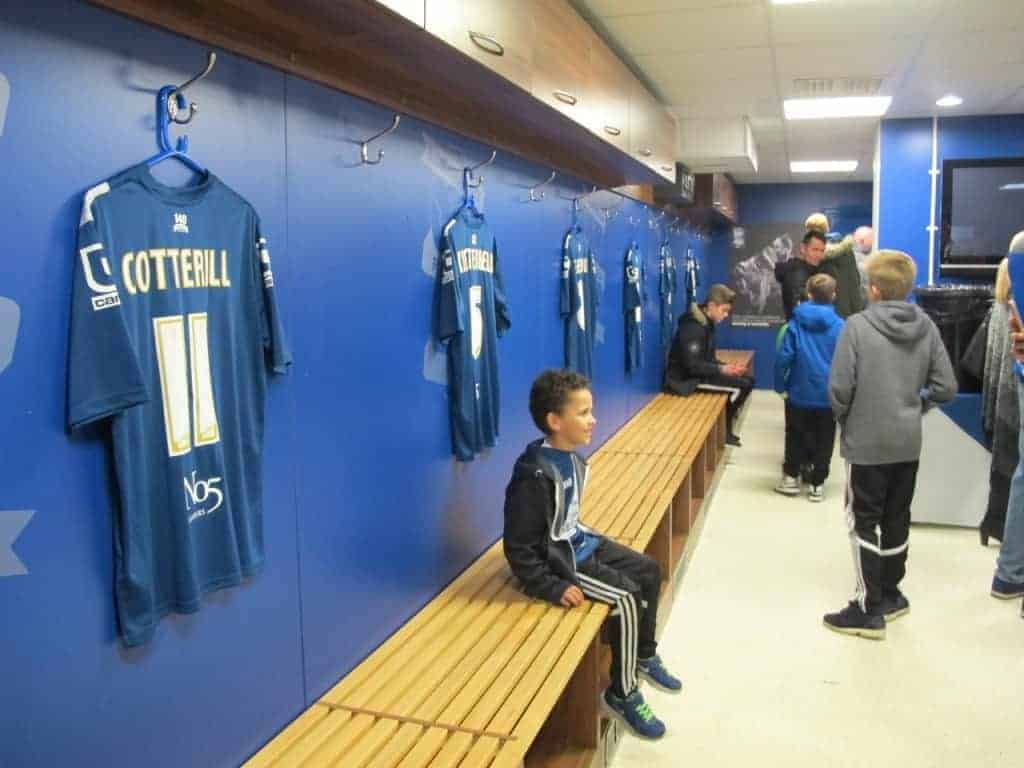 In the seats of legends. 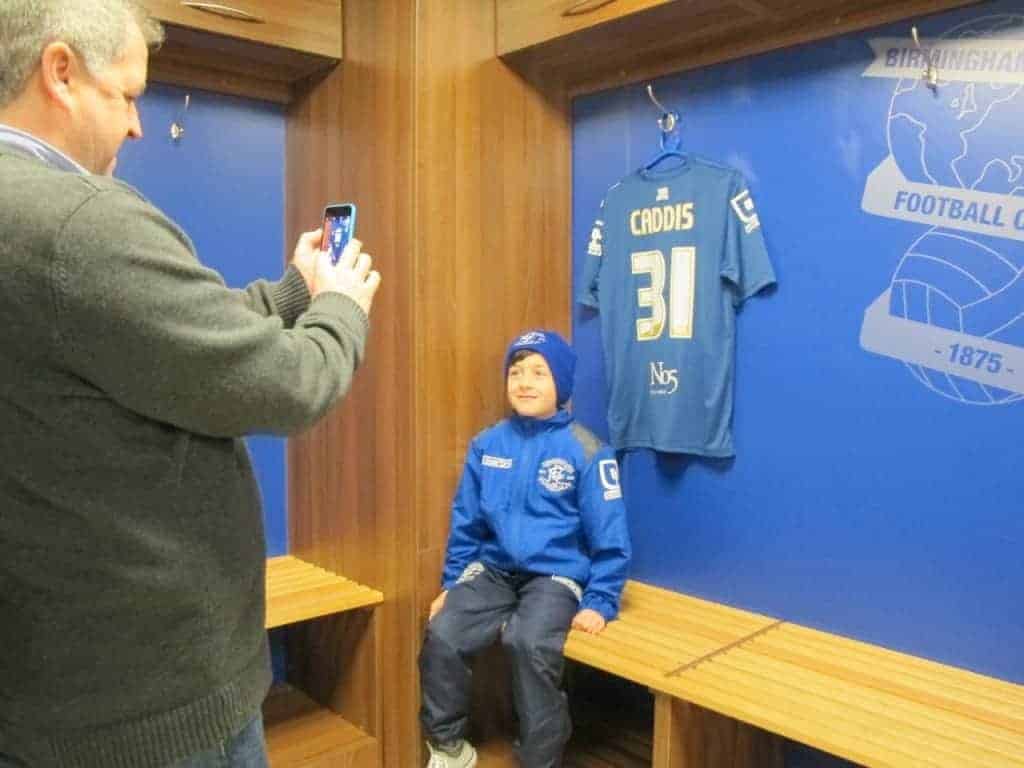 His favorite player, I assume. 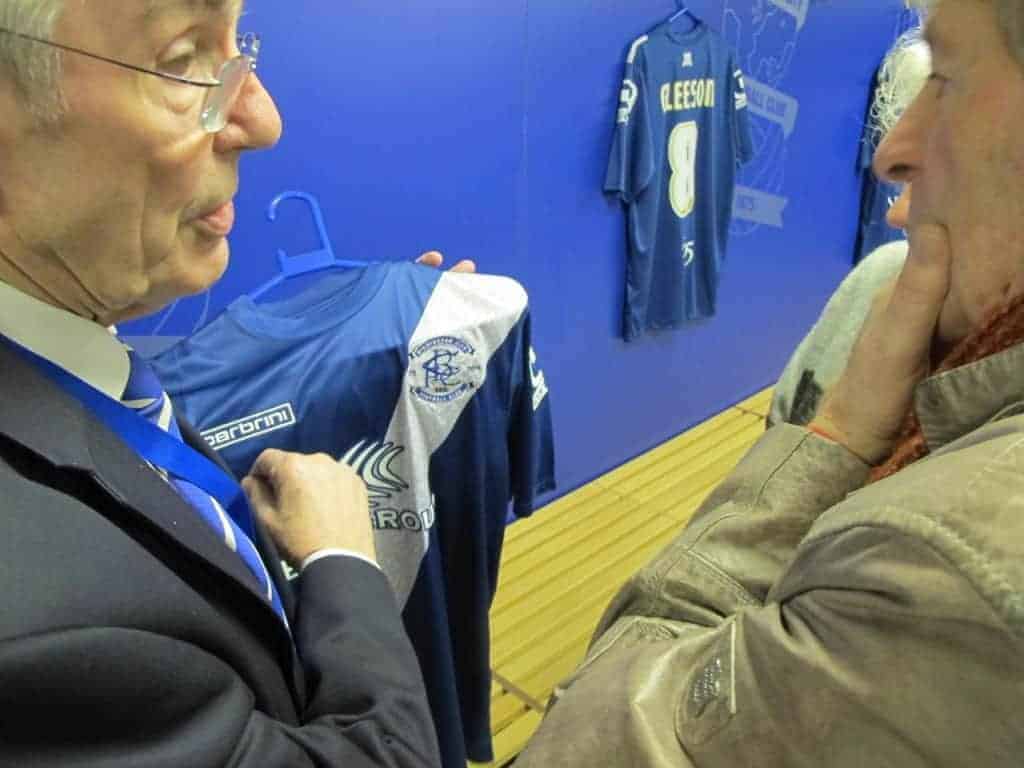 Remarking on the club crest. 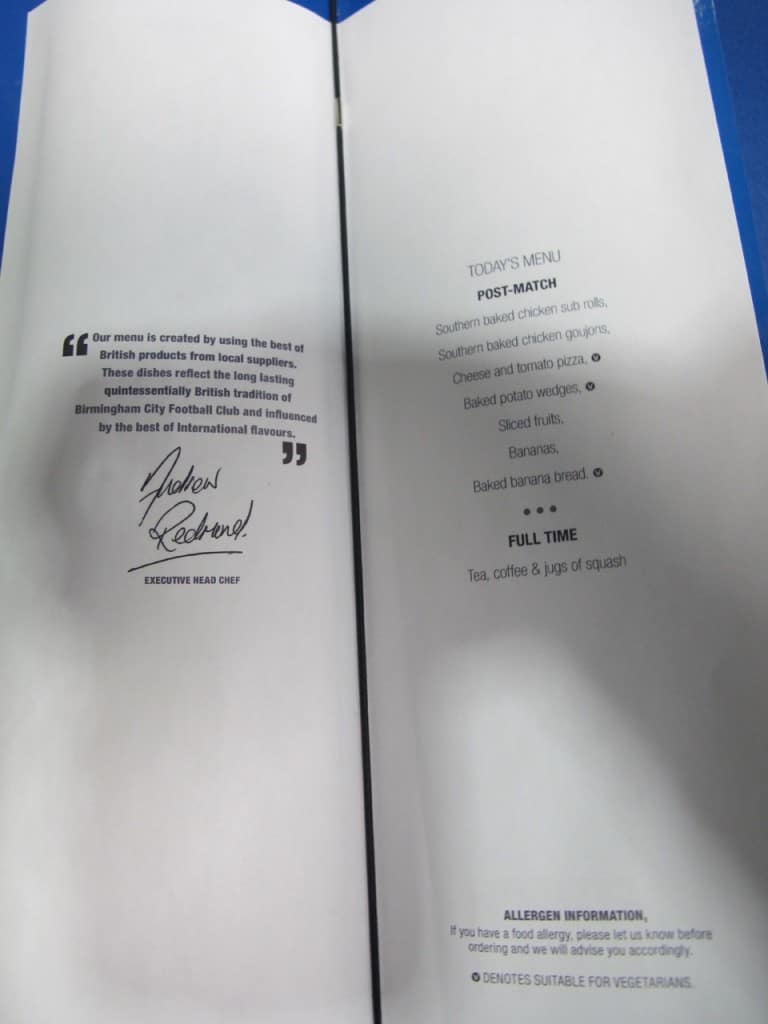 This little reminder for the players was funny: 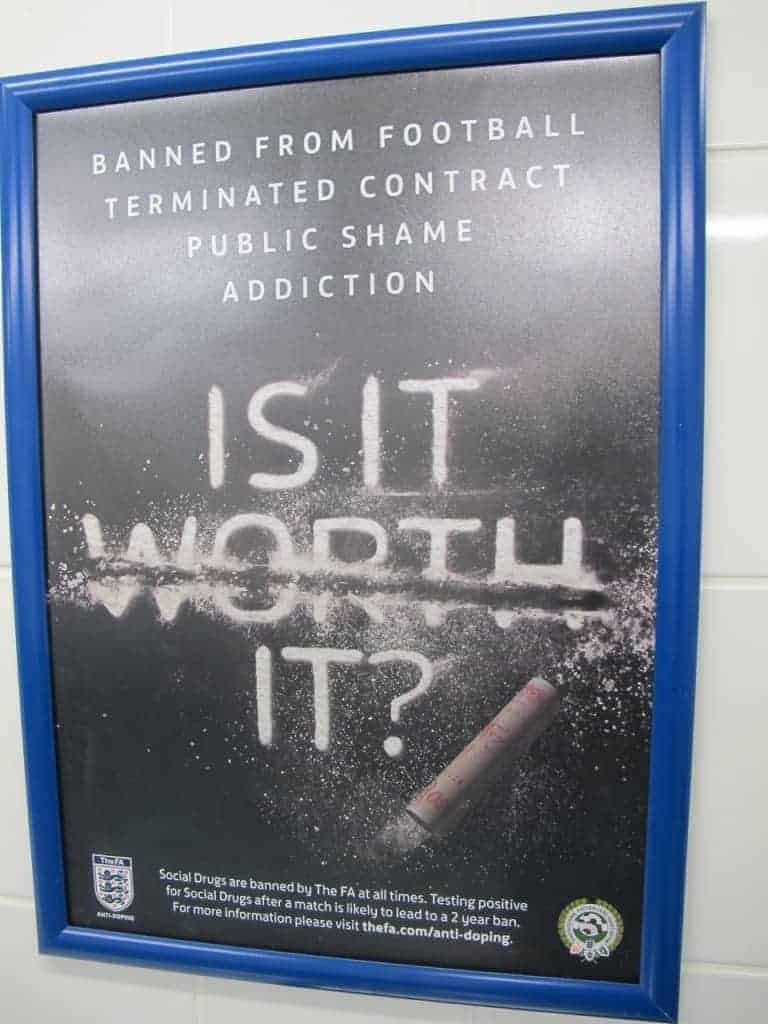 You expect a 20something footballer to know?

The door leading out included the club’s motto, which appears all over the place. 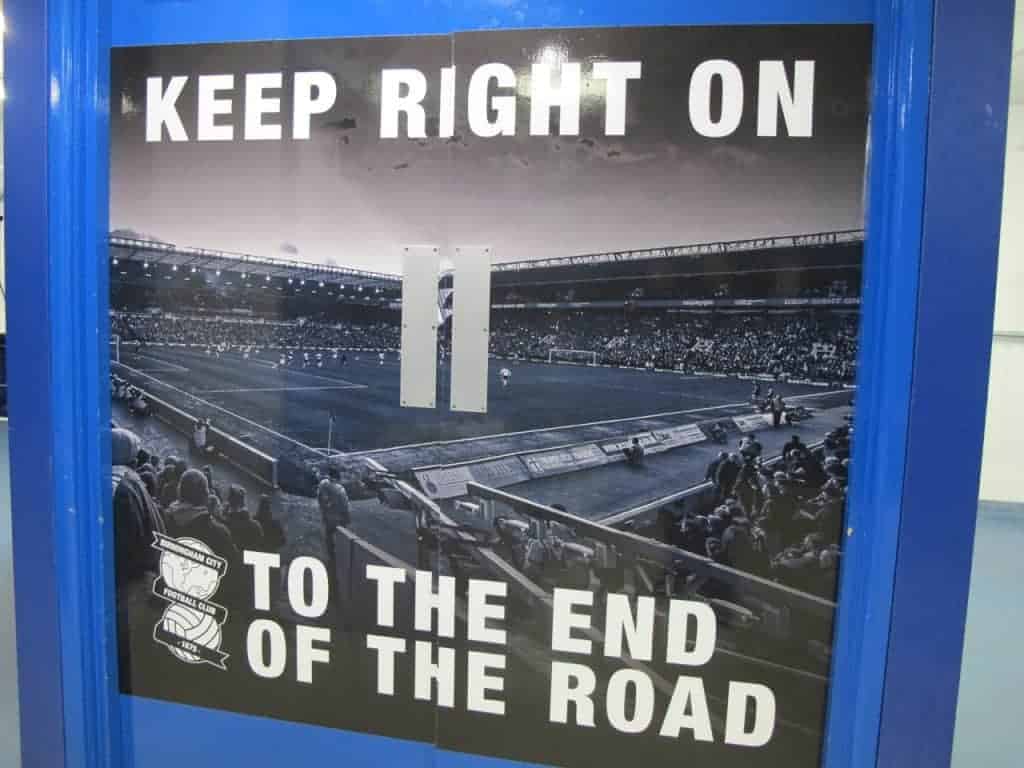 Down the hall, we got one funny image … 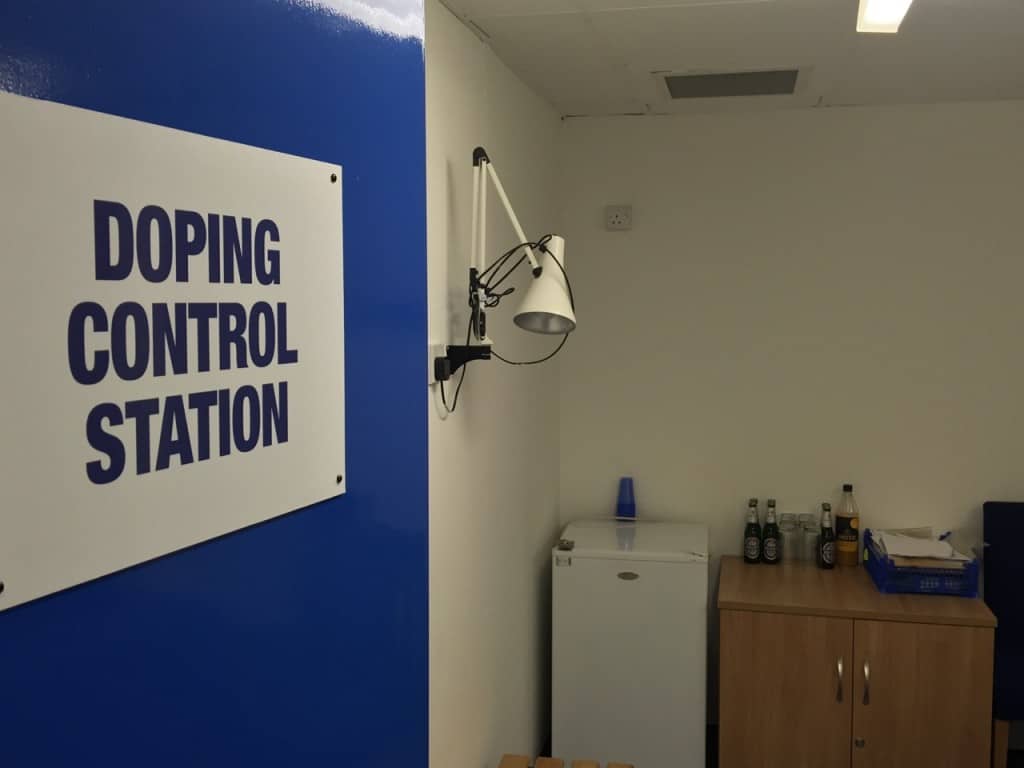 I swear I didn’t set this up — look at the table!

… and one kind of quaint one: 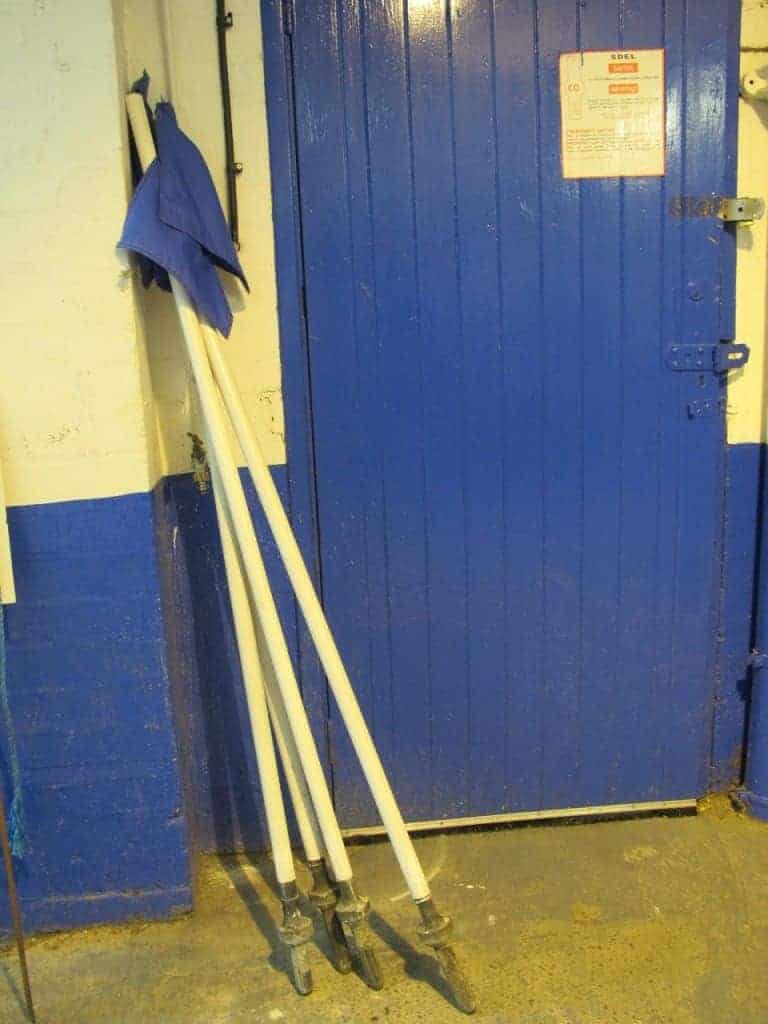 All ready to be put in place.

Then it was into the media areas, where we saw the (ahem) spectacular interview room: 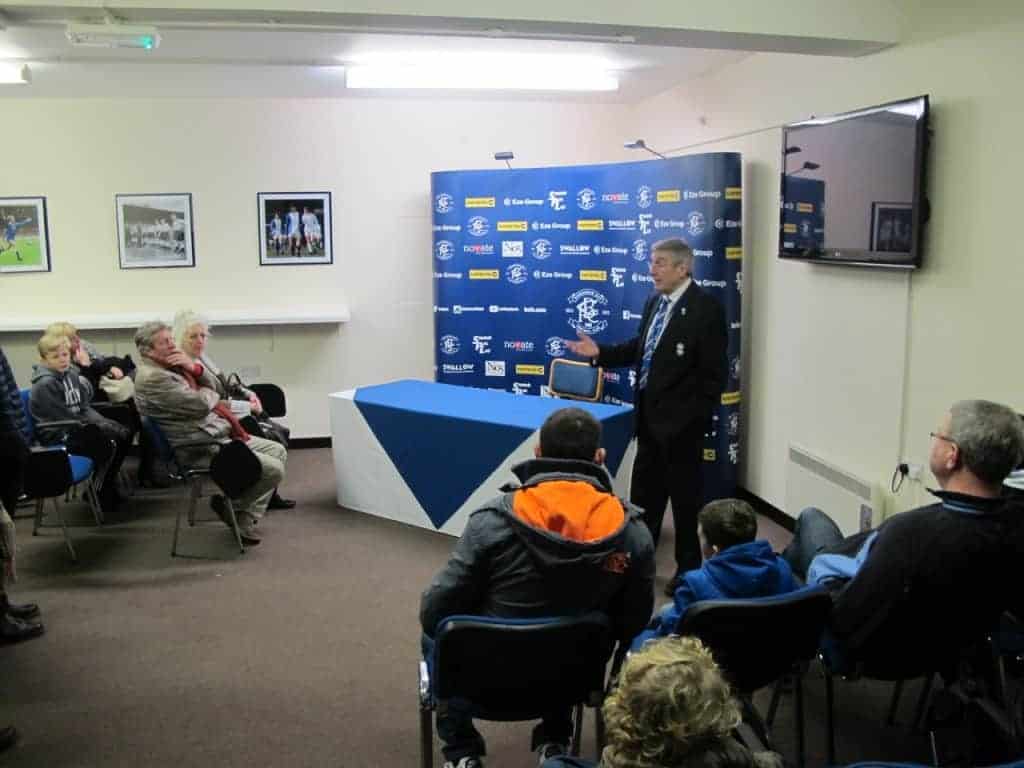 I don’t think anybody went up for their photo.

and I took a rare selfie, in this case doing my Man of the Match pose. 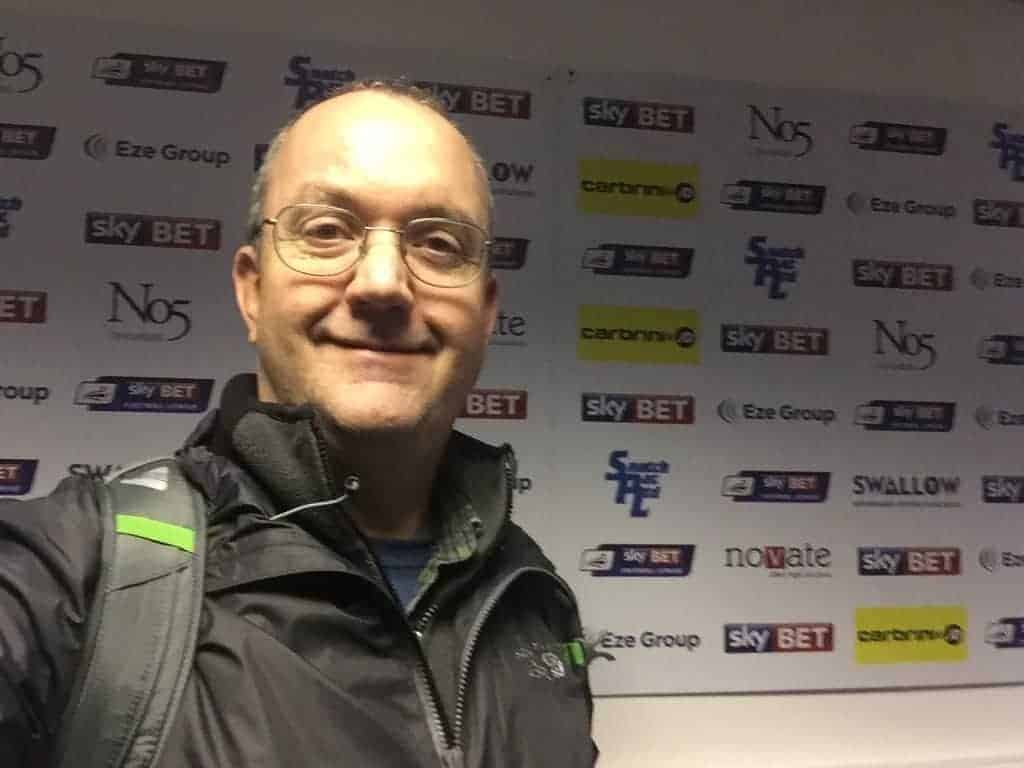 “We’re just taking it one blog post at a time …”

We then made a visit through the tunnel to the pitch, where this guy and his kid had some fun. 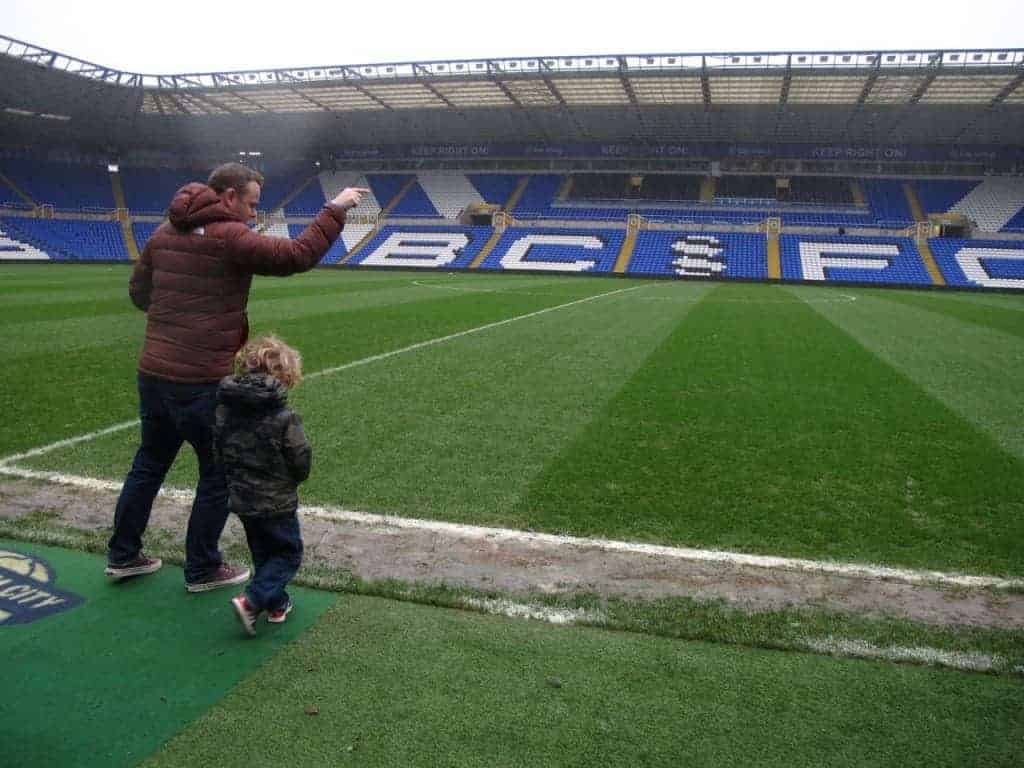 ‘Ats where the magic moment ‘appened!

And then, for something I haven’t seen on any other tour, they have a tiny little police station with Home and Away cells! 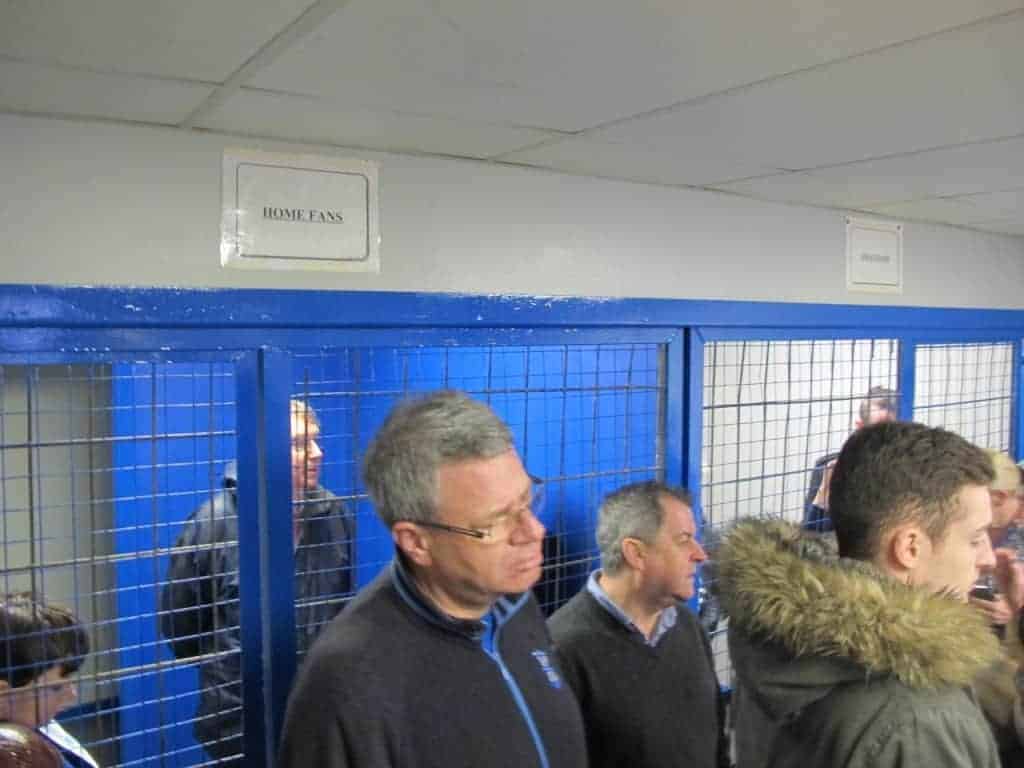 Not just a “naughty bench” at Birmingham City

I can’t imagine they have much need for jail cells at Birmingham City, unless maybe one of the local rivals is in for a game. Even then, I mean, it’s Birmingham City! What’s to get so riled up about?

Not much, honestly. But it’s a nice, local, friendly club — well worth a visit.