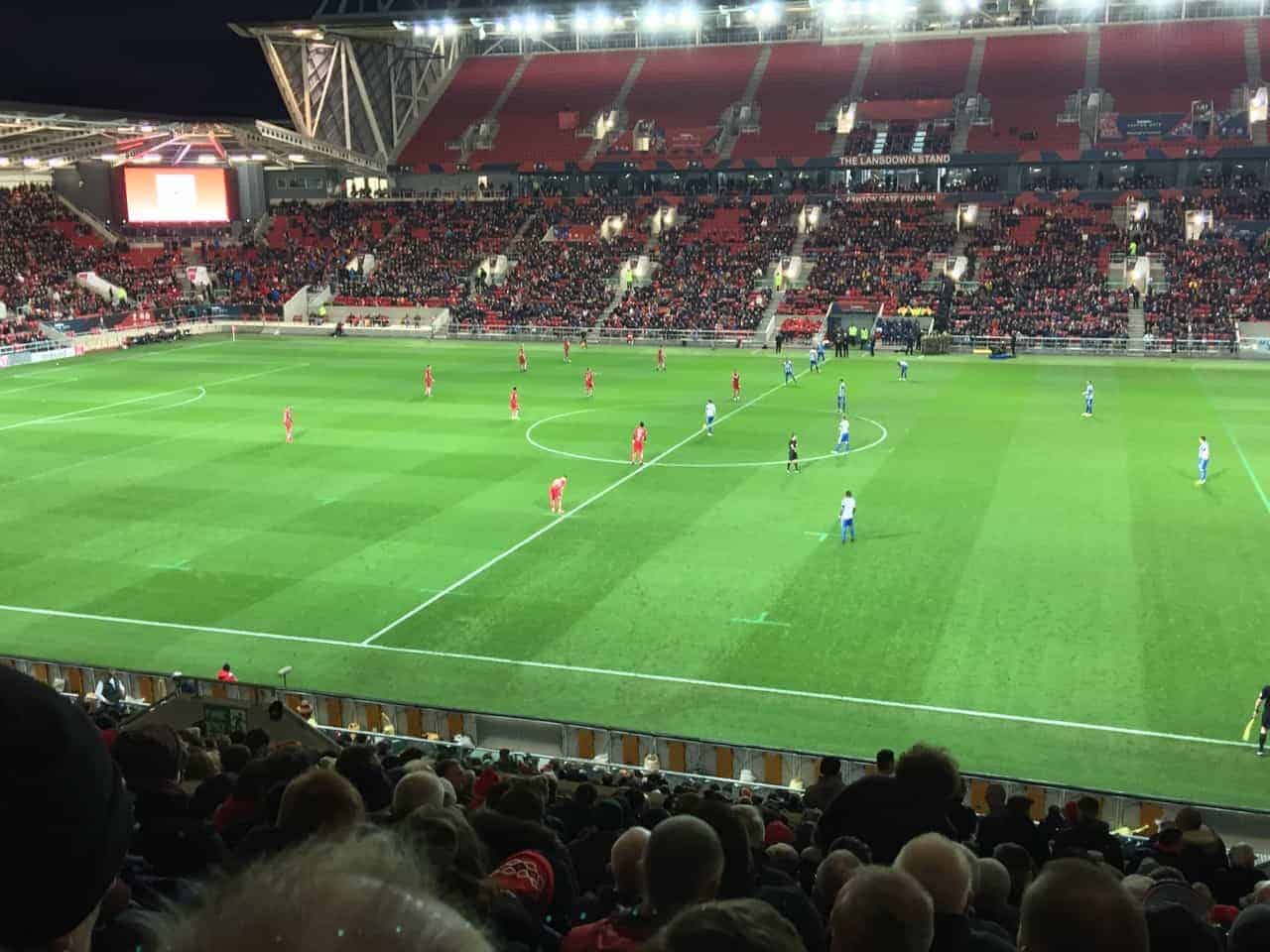 Seems to me that seeing a game at Bristol City FC is like arriving at the intersection of small-town, community football and the modern age.

This is meant as a compliment on both accounts, by the way. I love the family feel at these smaller clubs, especially on the level where I saw it across town at Bristol Rovers. They are a league below but feel like a world away.

At City, the similarities are there — the local main road is North Street rather than Gloucester Road — but the latter is a bit more hipster (the “artisan, hand-crafted” Bristol Beer Factory, for example) whereas up on Gloucester it’s a bit more vaping and hair salons. I approached both via a pleasant walk, but at City I arrived via a park where I encountered a coffee cart. With a macchiato in my hand and a nod to the dog walkers, I poked my head into the oh-so-English bowling club and headed down the hill to the stadium. 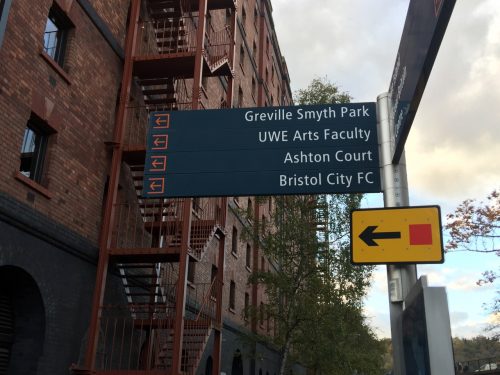 First sign of the club; it’s either this or a scarf.

You know you’re on the right track when you see a crowded pub with a big “Home Supporters Only” sign out front. Brighton and Hove Albion were the day’s visitors, and with the two clubs both in the top six of the Championship, the weather fair, and the game pushed back to 5:30 for television, there was something close to excitement in the air. (Update: Brighton were later promoted to the Premier League and are still there.) 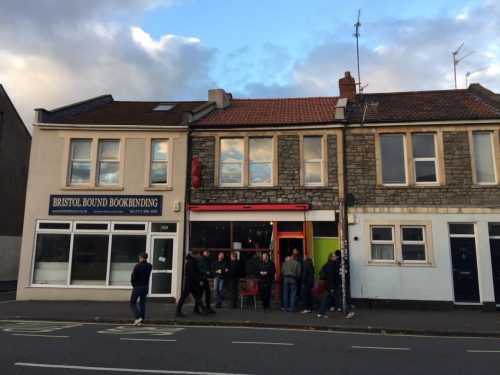 I literally can’t even find the name of this place on Google Maps.

Certainly, at this tiny pub over on North Street, where the foggy windows showed only raised arms and the open door released a wall of sound, the locals were well in the mood.

I had already observed a few pre-game rituals, from people lining up to have their photos taken in front of a “legend” I had never heard of, to a local being astonished that not only was an American in town to see the Robins, but that he knew they were called the Robins and their stadium was Ashton Gate. No such charming names exist anywhere in my home country. 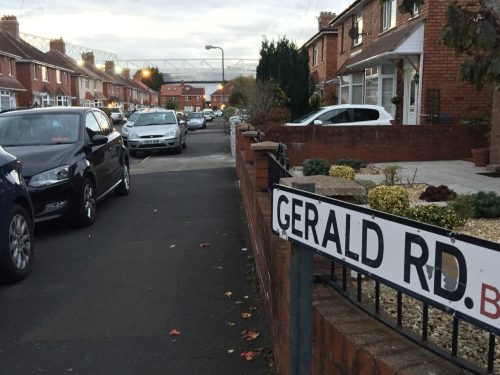 I kinda felt at home here!

One twist on the pre-match round-the-ground walk: I discovered a Gerald Road! Cue a rare selfie, to the amusement and confusion of several passing locals.

The stadium, frankly, was a revelation. It fairly gleams compared not only to Memorial Stadium across town but to many of the stadiums I’ve visited. Inside and out, it was most pleasant, and the food on offer outside was well above average. I, of course, went cheap and old school with a bacon roll, grilled onions, and HP Sauce. Someday I’ll even venture as far as a cup of Bovril. 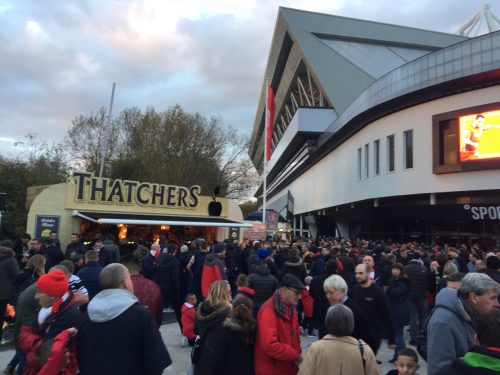 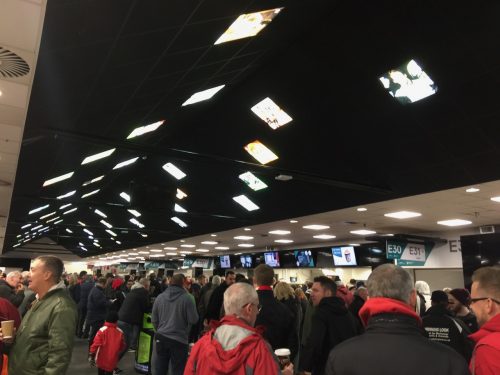 Very impressive interior, with legends and history above. 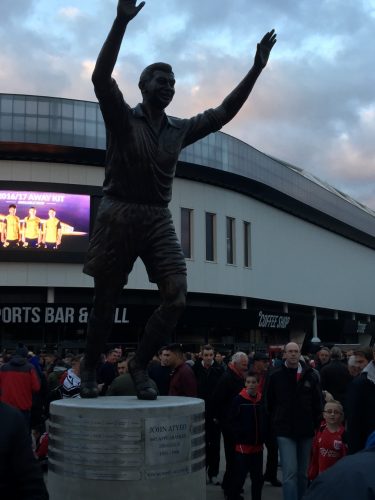 The legend here is John Atyeo, who played 645 times for City and scored 351 goals, making him the club’s top goalscorer ever.

Speaking of gleaming, at one point I walked past a pack of young women, all in red, lean and positively radiant. I tried to shake off my Dirty Old Man thoughts as I headed for the turnstile; at halftime I would discover they were the Bristol City Ladies, recently promoted to the top division. Even if for the wrong reasons, call me a fan. 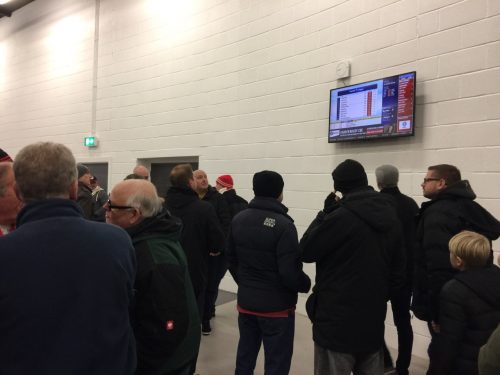 Checking the lineups and scores from around the country.

With those thoughts still in my head, it seemed even odder than necessary when, at the men’s room urinal (another pre-game ritual; I don’t like to to leave my seat during the game) I realized that not only was the man to my left looking at me, he had in fact just spoken to me.

As we both focused very hard on keeping our eyes firmly on each other (a really odd bit of intimacy, considering the circumstances) he repeated his traditional question, in a drunken slur: “Fancy our chances?” I confessed that, sure, but in fact I’d never been here before. He then uttered a series of heartfelt welcomes and best wishes which, again considering the location and his level of inebriation, made my visit to Ashton Gate start to feel … different.

Same thing when I took a close look at the badge I’d bought: it was a hot air balloon (there’s a local festival) with their crest, which includes two unicorns. Apparently this is in the city’s coat of arms because unicorns will only do homage to a man of virtue. 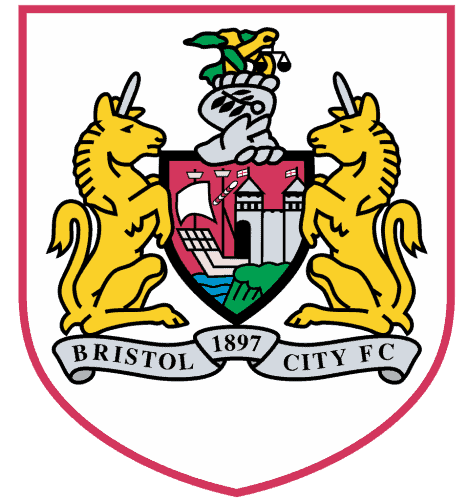 I took my seat in the Dolman Stand — always with a good view of the visitors — and quickly realized I was in Ashton Gate’s rowdy corner.

Panoramic view from my seat, visitors off to the right.

I was also among long-time neighbors, one of whom asked me if I was sure I was in the right seat. I said I was, having checked, and he counted the seats in front of him, next to me, clearly attaching a name to each, until he came to me, nodded, smiled, and sat back. No more words exchanged between us, and I kind of wished I had told him, as well, that I was new. Sometimes, as at West Ham a few years back, this leads to a certain celebrity status.

The teams came out, and I was on the lookout for a pregame anthem — which was a good thing, else I would have missed it, the whole thing being limited to about four seconds. I heard something about Bristol in there, then it was gone; it was only later, when I looked for it on YouTube, that I realized why (I assume) they cut it short: It is a truly awful song:

In fact, my London host said it sounds like “one of those songs the players record for Christmas.” Indeed.

Having belted out a perfunctory “Bristol” or two, we suffered through a minutes’ silence for Armistice Day — suffered because some rowdies in the corner and end didn’t get the message, kept singing, then shushed each other, and silence wasn’t attained until one last “FUCK OFF!” was heard ‘round the stadium.

It wouldn’t be the last; in fact, they cascaded that way, along with a deluge of “wanker”s, from the City fans at the whistle, though as a neutral I have to say there was no way to tell who had told whom to fuck off. The home fans suffered no such ambiguities and, despite the friendly greetings to each other before kickoff, reverted to the usual obscenities and taunts immediately after that whistle.

I don’t consider myself a prude, but I remain astonished at grown men’s enthusiasm for such phrases as “Fucking useless twat,” especially considering how often it’s aimed at a player they purport to support. “Shit ball” is another popular option, it never occurring to anyone that it might be a smidge easier to see the right pass when sitting comfortably well above your opponents. “Fuck off ref” I can understand, though as a neutral I am amazed how many good games the refs actually have. Still, at times I wanted to ask which team they were actually supporting, and maybe even point out the children sitting nearby. 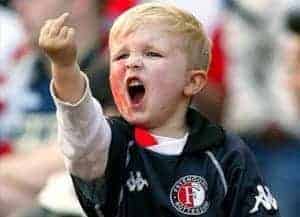 Not from this game, but he captured the mood pretty well.

The Angry Guy is definitely one of the standard characters you meet at games. But I have to report that at Bristol City I heard — perhaps only because I was more amongst them than usual — some worse-than-usual stuff. When Brighton launched the usual “You’re fucking shit,” the locals’ response was “You’re sucking dick.” The standard taunt of “We forgot that you were here” earned the rejoinder, “We forgot that you were queer.” In 2016, no less.

Much of this energy quickly dissipated when the gap in talent and focus on the pitch became apparent. Brighton, second in the league only behind rampant Newcastle, looked like a varsity team warming up against the JV. And though they deserved their eventual lead, nobody could have guessed how it would come about. A side pass at midfield was intercepted, Steve Sidwell of Brighton took one touch and a look upfield, and then a millisecond after I realized he had launched it goalward, I further realized it was going in. The keeper wheeled, ran, stumbled and flailed, and a moment later the Albion fans erupted. Externally, I sat calmly, but internally I couldn’t wait to tell people I had seen a 55-yarder!

I do recall, by the way, seeing Sidwell, when he played for Fulham, do the pregame crossbar challenge at The Emirates with such clear talent that the Arsenal fans clapped him off the pitch. So the man has accuracy in that left foot.

After that, Albion only raised their game, and Bristol only flagged, and by the time it was 2-0 we all knew what was happening. It was pretty bitter in my environs from then on, but there was a humorous interlude. My immediate neighbor, a master of “shit ball” and “useless twat,” yelled at the home keeper at one point that he should have come for that fucking ball. This was ordinary enough, but he used the player’s name, which caused half a dozen men nearby to call out, “E’s not playin’!” There was an awkward silence, a few rolled eyes, then he yelled even louder, “Well, ‘e bloody well should be!” Laughter erupted all over.

That was about as fun as it got, although I do enjoy the “Cheerio” song one group of fans sings to the other upon their early departure. Brighton gave this a right proper go, as they might have said, and went home relishing a thorough win.

I, meanwhile, headed off to North Street, where I chose a proper cod and chips for £4 at Fishminster over a gourmet burger starting at £8.50 from the hipsterlicious Burger Joint. Again, the intersection of old and new, and the fish was traditional yet modern and reasonable, just the way I like my fish and my football.

My latest tour was off to a good start, 36 (Update: now well over 100) games now under my belt and Bristol, after some touring the next day, enjoyably checked off my list.