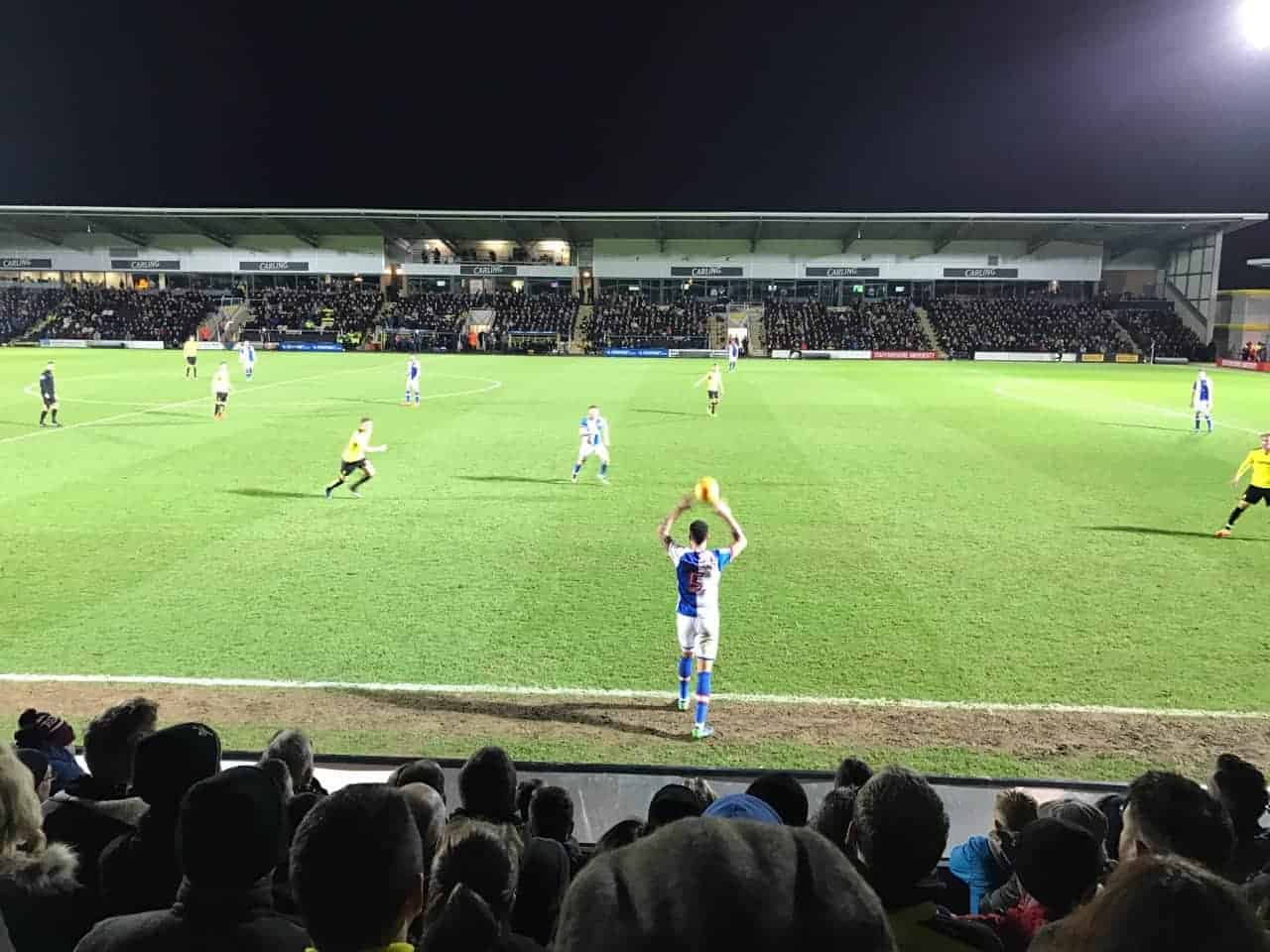 It seems to me the soul of English soccer is on the terraces. And it was in Burton-Upon-Trent that I was reminded not only of that fact, but also where the game has gone astray somehow. 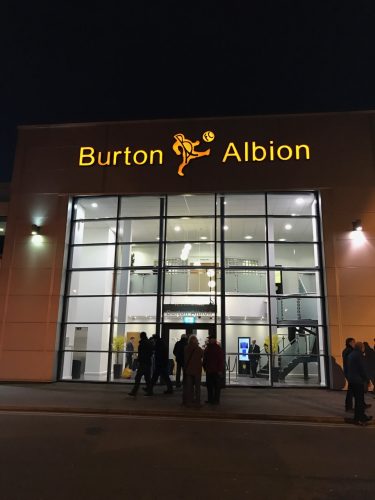 Main entrance of the Pirelli Stadium, home of the Brewers, Burton-Upon-Trent.

Stumbling around Birmingham New Street in the morning, waiting for the Nottingham train, I glanced at a paper in a Pret A Manger and saw the headline “Tinker Man Axed.” It actually made me stop and stare, and all I could think was, “My god, Leicester City actually sacked Ranieri?”

The logic of it was perfectly clear; Leicester City simply must stay up, and there is no room for sentiment. Still, doesn’t the great miracle of 2016 somehow form an exception to that? The whole world knows the name of Leicester City FC because of it, and only it. It charmed everyone. I was there and got to experience a piece of it, and it was one of the most amazing things I’ve ever felt.

I guess this realization that soccer is a business, that the world rarely gives a damn who you are or what you’ve done, keeps occurring to us over and over, like small bites taken from our sporting hearts. And maybe the club went and got a big head, thinking they belong at the top despite all their history elsewhere.

But even as I write that, I know it’s ridiculous. I’m not on the board. I’m not looking at the financials. I’m not having to explain why we are in the Championship, playing Barnsley and Bristol City, instead of the Premier League playing Chelsea and Arsenal, and that it’s in part because Ranieri was so nice, and 2016 was so amazing. 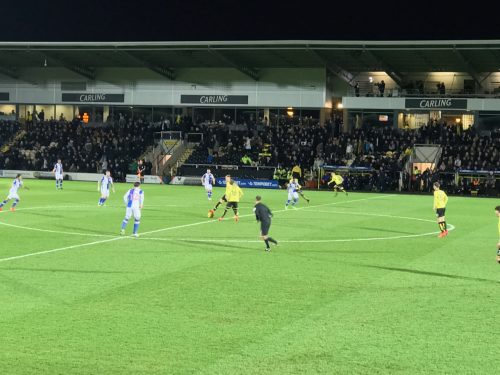 Kickoff at the Pirelli. Come on you Brewers!

I heard several people working their way through this same conundrum as I walked along the River Trent towards Burton’s Pirelli Stadium. I was feeling a bit morose, I suppose, until I fell in behind a group of teenage boys discussing the great goals they had all scored, each one needing to be more amazing than the last. Then one of them mentioned “American chicks,” and they all responded as if he had just said “ice cream” to a bunch of potheads. Somewhere in the noise afterwards I heard an exaggerated American accent say “soccer,” and I forgot all about Ranieri and the Foxes and their Board and all the money.

Instead, the community of Burton Albion was gathering at their tidy little ground on the edges of the world’s former brewing capital. There’s been a bridge over the Trent here for 1,000 years, large-scale brewing for 350, but professional football for exactly eight.

I had spent the previous day wandering around Burton, but I knew that were I looking for a true tonic to the Big Money situation, I somehow would find it on the terraces in Burton. 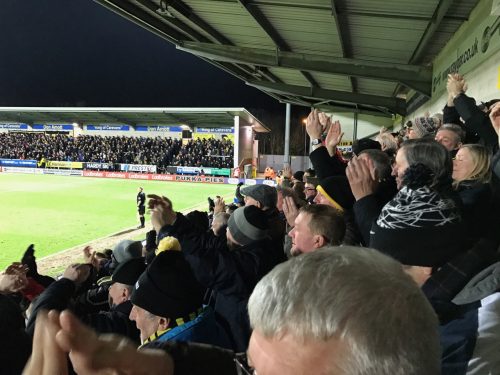 The terrace crew celebrate a goal.

The Brewers – could there be another nickname? – came into existence in 1950, practically this morning in English soccer, and for 59 years they muddled along in that vast thicket called non-league football, winning things like the Northern Premier League Premier Division and enjoying a rivalry with their (relatively) big-time neighbors up the Trent, Port Vale.

In 2009, Nigel Clough (son of the Nottingham Forest legend Brian) got them into the football league, then, of all things, left for nearby rival Derby County. It’s a club that is only about 15 miles away, yet the Brewers had never played them in a competitive game. Same for all their nearby neighbors, in fact: West Brom, Villa, Forest, Birmingham City and so on. The Brewers just weren’t in their leagues.

Their big moment was in the 2006 FA Cup, when they drew Manchester United, held them at home, then got the big-money replay at Old Trafford and set the record for away attendance there with 11,000 people. They lost, 5-0, but made history anyway.

Now their home ground holds barely half of that but is a shiny new, and yet cozy, testament to their success since. Having only been professional for seven seasons, I found them in the Championship – terrifying for Leicester, but inspiring here – and confident of a win against now-lowly Blackburn Rovers. Perhaps I should say hopeful, as it was their third game in six days, and when you’re 19th in the league, it hardly matters that you’re at home and your opponents are 23rd.

I claimed a spot on the terrace, hot chocolate in hand, and found myself in the middle of a bunch of regulars. I have identified a host of characters one will meet at an English soccer game, and here I found myself in the middle of a veritable pack of Middle-Aged Randos. Generationally, I felt right at home, but it did feel awkward as they called out to each other beyond, above and around me. I felt somewhat invisible, and would have said something, but it was their night and space, and the game would soon envelope us, anyway.

The Burton boys started as listless as one might expect, and so did their fans. We all just stood and watched, mostly, as Rovers dominated the ball, created ever-more-dangerous chances, and then scored on a corner. I would find out later it was an own goal, but Rovers were certainly “good for it,” as they say. The first half ended with the visitors ahead, the terrace frustrated, and my feet and legs starting to hurt. I had walked all over town for the afternoon, and it was just yesterday I was having my zombie day after flying from the States. And I was 50 at the time. 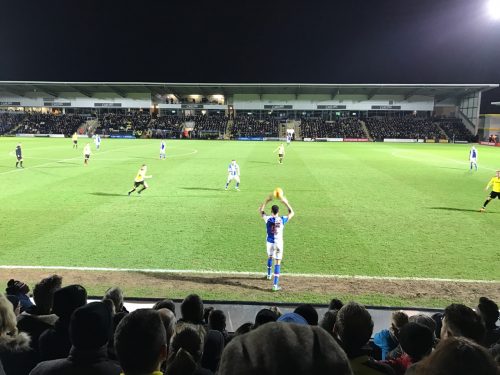 View from my seat towards the top of the terrace!

The Brewers came out swinging in the second half and got one back within 10 minutes. From then on, for a relegation scrap in the second tier, it was entertaining stuff. We had shots, “oh dear” moments, hard fouls, questionable calls, and witty banter. We were close enough to the players that when Rovers’ winger called for the ball, somebody in the back row could call out “Forget it, they know you’re shit!” and the whole stand could laugh.

The home team started to fade again, as did I, and I considered bolting to catch an earlier train back to Birmingham. When five minutes extra time went up on the board, there were groans, somebody said, “Oh do we have to,” and I leaned toward the exit even more.

Good thing I stayed, and good thing that I felt an old impulse, born at Old Trafford years ago, to start filming, lest something dramatic happen late on. And boy did it – even though it was a most memorable “almost.”

It hit both posts and didn’t go in!

That was the last thrill, and at the final whistle, I grabbed my pack, put my head down, and started weaving through the crowd. It was a half-hour walk to the station, which I made with 10 minutes to spare for the next-to-last train back, and all along the road was the post-game chatter about that last shot, about how they must have been tired but you’d still like to see some more heart and desire, about how it’s a good thing Wolves lost to Birmingham, and finally the place where all home-draw evenings wind up, with the grudging admission that after all, down where we are, a point is a point, and I’ll see you in two weeks for the Forest game.

Here are the official highlights, which include Burton’s absolutely cracking goal and, of course, another angle on the double-poster.

For me, it was back to the hotel for not enough sleep and a train in the morning for Barnsley. A day in Burton had reminded me that if you want to get to know a place, you really have to go there and talk to the people, and if you want to remember what the game is supposed to be about, get yourself a Bovril — especially in the town where they make it — and head for the terraces.