English Soccer Travels:
What to See and Do in Burton-Upon-Trent

One’s first view of Burton-on-Trent is quite appropriate.

I have designated a new rule for my English soccer travels: that if all you know about a place is what Wikipedia or TripAdvisor tell you, then you don’t know anything about it, and you need to go there.

I will call it the Huddersfield Rule, after having a defining such experience there on a previous trip. 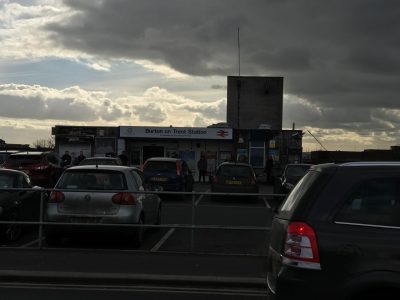 … and, Welcome to Burton!

It’s a lesson that I actually learned in a previous life in Abilene, Kansas, but for our purposes it goes like this: You’re thinking about visiting a place, looking for what to do, and all you see among the usual Top 10 lists is petting zoos, country gardens, town halls, and museums. This might make it sound dull, but you should go anyway, have a look around, and talk to people. You never know.

The town of Burton-Upon-Trent is now subjected to the Huddersfield Rule. I knew I was going, anyway, to see their recently successful football team, Burton Albion, and I knew it was a historic brewing center, and that was about it. And, well, you never know.

A half-hour out from Birmingham, I got off at the thoroughly unspectacular train station and was immediately greeted by a small forest of metal tanks. Couldn’t be a better introduction to a place known for making beer for literally hundreds of years. Apparently a saint of long ago was buried on an island in the River Trent, inspiring the eventual formation of a monastery in the 11th century, and the monks made an interesting discovery: the local mineral-rich waters contributed to fine and strong ales. As a historic placard in the Town Hall puts it, “pilgrims began to spread the word.” 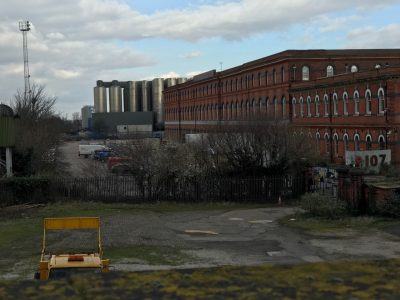 One of the old breweries is still there, under a new name.

When a bridge was built over the Trent around 900 years ago, its importance was set, and the beer kept flowing. In the 18th century a man named William Bass opened a brewery there and ushered in the age of industrial beer making. Yes, that Bass. The famous Pale Ale was made here for 200 years, and in the 19th century it was the largest brewery in the world.

Two of the three breweries they built here still stand, though sadly now they bear the name Molson Coors. Why does America always export the worst of its culture?

At one point in the 19th century there were 32 breweries in town, making 3 million barrels a year, and they say that when the coppers were boiling the whole town shook. Such was the quality of the water in town that a process to make other waters match its pH and other qualities is still known as “Burtonizing” it.

First I had a little walkabout, finding the local town hall and parish church in their Georgian glory, and the usual war memorials. 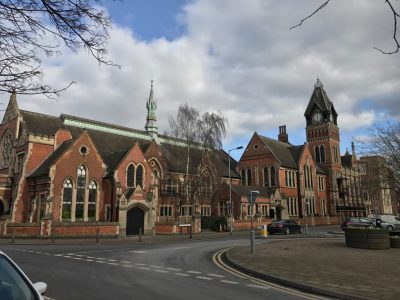 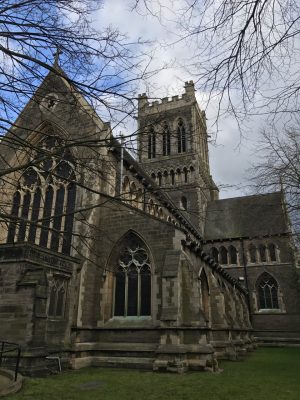 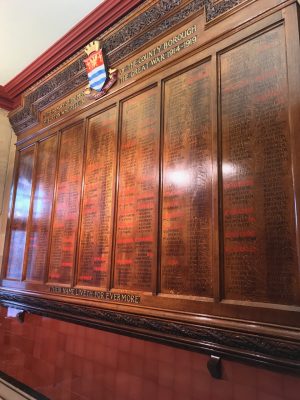 England has a bit of an obsession with its war dead. 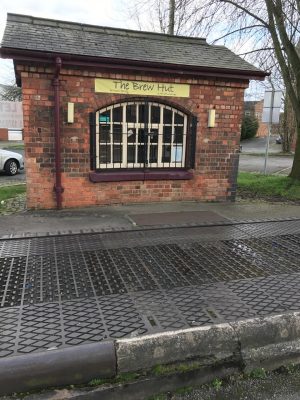 I stopped in a local pub because it said something about Middle Earth, the kind of thing someone should see. The landlord told me that he had taken over the place four months before, changed the name to the Weighbridge Inn because of the scales located just across the road, and anyway, even when it was the Middle Earth, it had tile floors, white walls, and fluorescent lighting – “all the charm of a doctor’s waiting room,” he said, “only with beer.” It is much nicer now, with a real fireplace and everything.

He and his customers regaled me with stories of the brewing industry, and I was reminded that one innovation the town contributed to the world was a patented way to make food from all the leftover yeast. Indeed, Marmite was invented here, as was Bovril, and they still make both of them in town. Sadly, they don’t give tours there.

I figured I needed to see the National Brewery Centre, and I found it to be very much the standard historical museum, with interesting information, a few fun displays, and a cheesy video.

There were also horses, which I am told occasionally still pull a wagon around but otherwise just look impressive as hell and eat a lot. The menfolk will also enjoy a large steam engine that runs once a week starting Easter Sunday. 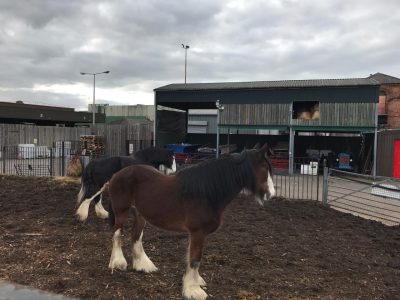 Horses at the National Brewery Centre. 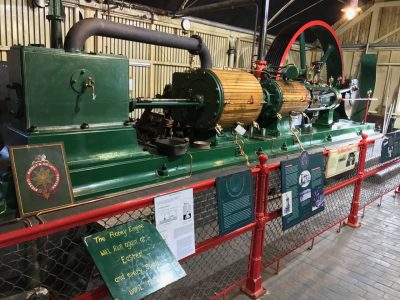 Steam engine at the Centre.

Were I not a former drinker, I would have further enjoyed the benefit of a pint at the end of the tour (included in the £9.95 cost), but I guess I can christen a new rule, stating that an old alcoholic can feel at home in a pub, while still getting out alive, dignity intact. Let’s call it the Lemonade Rule. 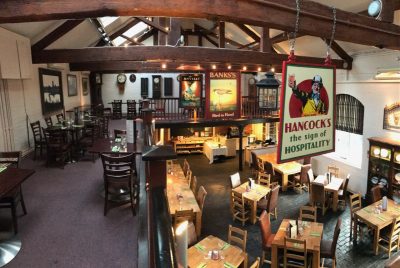 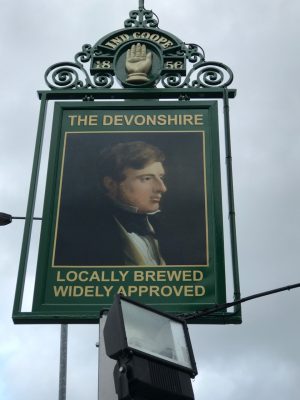 One of many small pubs in town has a motto that fits the town well.

I did get a few tidbits from TripAdvisor, so I went in search of the Kandy Factory, where kids can make chocolate and other sweets, and a 19th century bridge over the Trent — beer drinkers will recognize the mayor’s last name in the photo below. 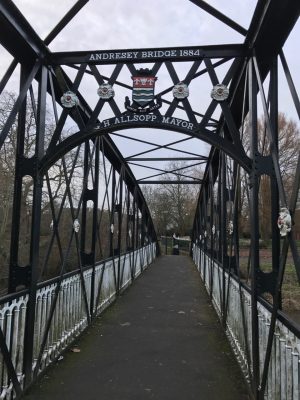 Footbridge over the Trent. 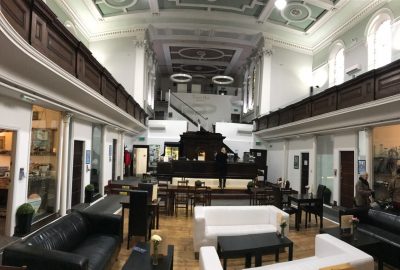 Inside The Trinity, a former church now a tea room.

In the usual “pedestrianized” high street I found a fish and chips place that looked good because (A) it only served fish and chips and (B) the staff were wearing white coats. This was Tommy’s Fish Bar; Tommy greeted me, told me he’s originally from Cyprus, said he’d been there for 35 years, and that the place has been a fish bar for 91 (!). He told the usual tale of local decline in the 60s and 70s, then brought out a perfectly fried piece of haddock with chips and mushy peas. That and a coke set me back all of seven quid — plus I got to talk a little footy with a Chelsea fan behind the counter.

Elsewhere in town I found an The Trinity, an old church built by “non-conformist” beer barons, and now a tea room with artisan shops on the side. Just down the street was Langan’s Tea Rooms, a whole different level of tea room where (forgive the stereotype) a mom and daughter could spend some time while Dad and junior are off at the game.

What no one told me about Burton is what greeted me at the station: Gateway to the National Forest? I didn’t know there was one, but it turns out it’s being created. 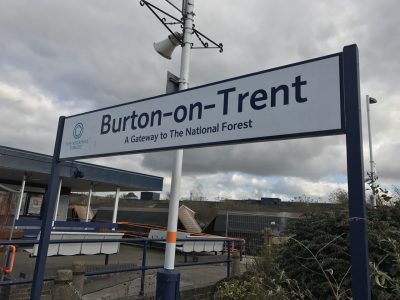 A National Forest? Who knew?

Millions of trees have been planted, land has been secured, and what is clearly a regional tourism strategy is being pursued. Within a couple hours of town – East Staffordshire, if you’re interested – are working farms, natural areas, restored canals, walking paths, a falconry center, adventure parks, canoe-picnic locations, and plenty of other attractions. Check it out.

By the way, St. George’s Park, training ground of the England National Team, is nearby. Tours are available, but I can’t speak to how interesting it all is.

I would have to say that, especially if you love beer, and if you want to experience a fine combination of community football club with high-level competition, Burton is a fine place and worth a visit.

I came for the afternoon and evening from Birmingham (half hour on the train, 14 quid return), but you could spend the night, drink in one of many pubs and microbreweries, maybe rent a car and head out into the countryside.

If you do, make sure to visit the lads on the Pirelli Stadium terraces, have a pint or two for those of us who can’t, and tell Tommy the fish man that American writer fellow says hello.