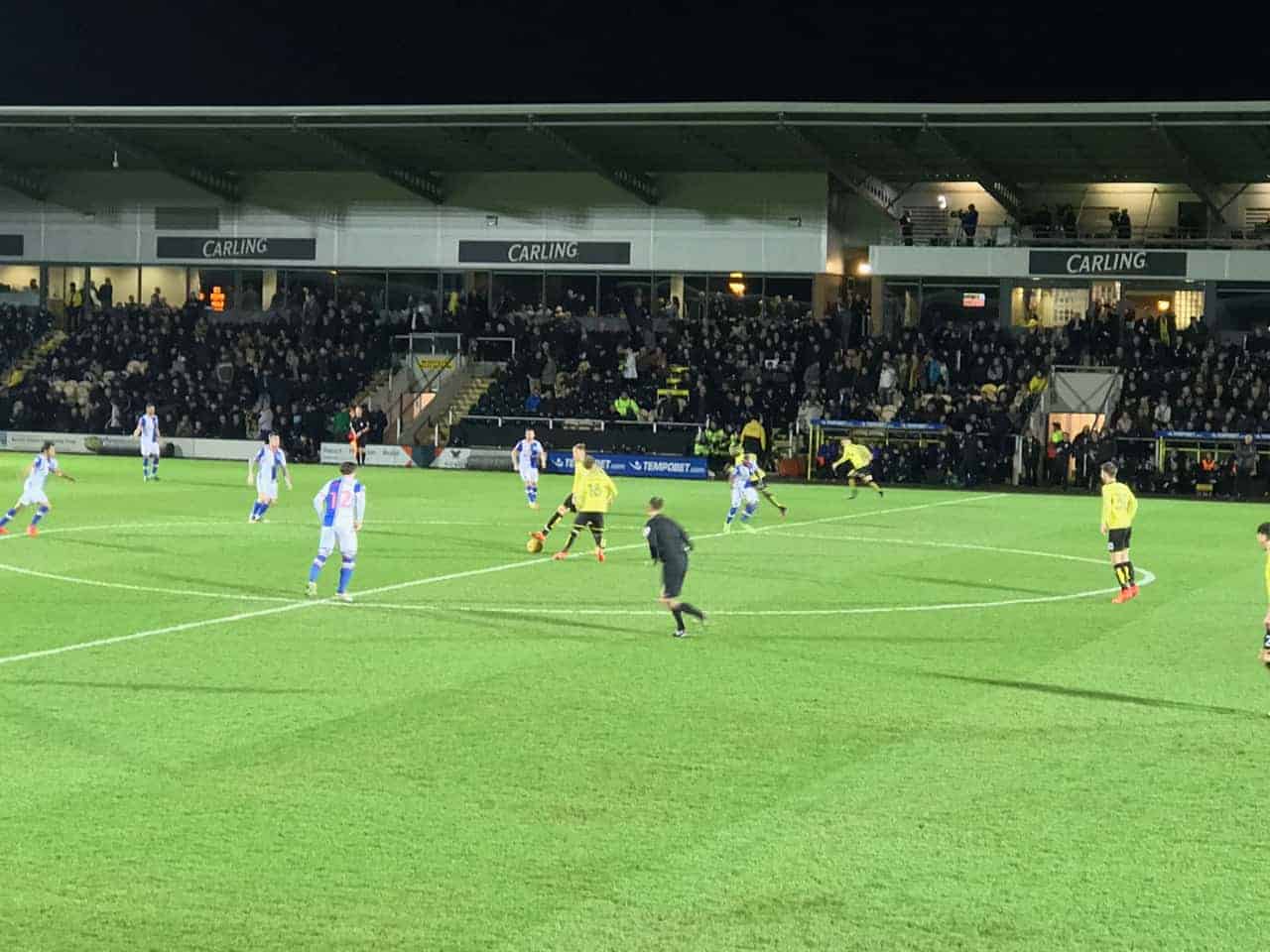 Kickoff at the Pirelli Stadium, Burton Upon Trent 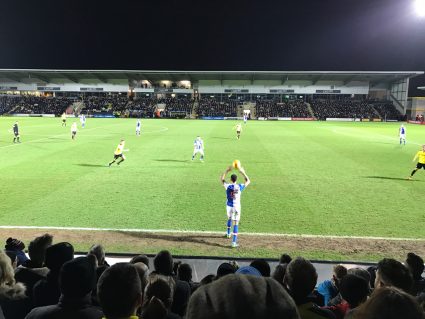 You’re close to the action at Burton Albion.

Burton Upon Trent, 30 miles northeast of Birmingham in the West Midlands.

With most English clubs tracing their history to the 19th century, it’s pretty remarkable to be discussing one that was founded in 1950 — and only made it into the Football League in 2009. One of the best untold stories of recent seasons is that Burton Albion, in the traditional beer capital of England, with their 6,000-seat stadium, managed to stay in the Championship for two seasons.

The Brewers, because Burton is the home of beer in England. And by the way, Albion is sort of an old Roman name for the island of Great Britain. There are a few Albions in the League.

12th in League One, 3rd Round FA Cup, 4th Round League Cup 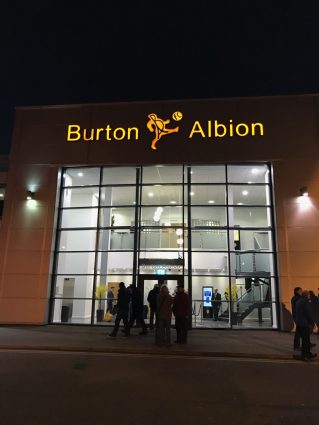 The Pirelli Stadium, with 6,912 capacity, of which 2,034 are seats. It stands where once there was a Pirelli Tires (or Tyres in the UK) plant; the company donated the land for the stadium in return for naming rights. The seats are all in the South Stand, which also has the club offices, so the rest is terraces; the away fans sit in the East Stand, known for sponsorship reasons as the Coors Stand (Coors is brewed in town).

Starting in the 19th century, there were a few football clubs in town, but it wasn’t until 1950 that the current club came into being. They kicked around leagues you will have never heard of (Northern Premier League Premier Division, anyone?) until 1998, when they hired Nigel Clough as player-manager. If you know your English football, you’ll recognize the name; Nigel’s dad, Brian, is a true legend of the game. He won the title with Derby County and then won the league and Europe (twice!) with Nottingham Forest.

By 2002, Clough had gotten Burton to the Conference, which is levels 5 and 6 of the English League System.

In 2006, they gained some notoriety by drawing Manchester United in the FA Cup, at home, and held them 0-0. This meant a replay at Old Trafford, which they lost 5-0 — but they set the all-time record for away fans there, with 11,000 Brewers fans making the trip. A reminder: home stadium capacity, 6,912. Burton Upon Trent population: 73,000. Attendance that night at Old Trafford: 11,000. Roughly one in six people in town made the trip!

Burton’s two-year run in the second tier ended on the last day of the 2017-18 season; when Bolton Wanderers scored twice in injury time to stay up, Burton joined Barnsley in dropping to League One. 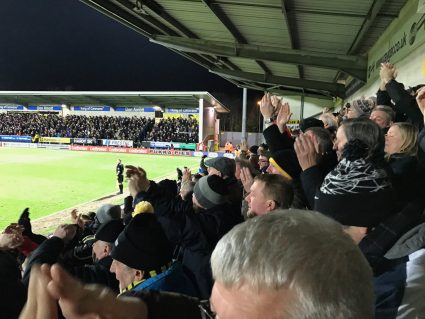 On the Pirelli Terraces.

They do a version of “Country Road” with the lines, “Take me home, Derby Road, to Pirelli, to see the Brewers …” They also have a fun one saying that Burton On Trent is wonderful: It’s full of beer, beer, and more beer.”

Back in their small-time days, they got mixed up with teams like Gresley Rovers, Nuneaton Borough, Stafford Rangers and Tamworth. I know, me neither.

When they made the Football League, their main rivals became nearby (and similar-league) Port Vale, Crewe Alexandra, Notts County, Chesterfield, and Walsall. But they have (for now) left those folks behind except for Crewe, currently also in League One.

In 2016-17, when they got to the Championship, they played their first ever competitive matches against Nottingham Forest, Derby County, Birmingham City, Aston Villa, and Wolverhampton. All of those clubs are within about an hour of Burton, but they had never been in the same league before!

Beer! Seriously, Burton Upon Trent is the Milwaukee, Wisconsin of England. 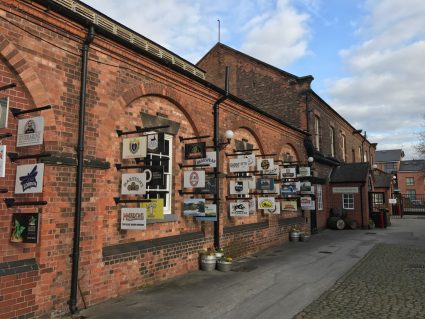 They have made beer there since at least the 11th century, when local monks discovered that the water in town was excellent for making strong ale. Combine this with the town having a 12th-century bridge over the River Trent, throw in some canals during the Industrial Revolution and railroads later, and kaboom: Brewing capital! The water is of such quality that a word was invented — Burtonizing — to describe bring other places’ water up to the standard.

Most notable in the town’s history was William Bass — yes, that Bass — who combined beer making with industrial practices in the 18th century, and his brewery in town became the world’s largest in the 19th century. In 1880 there were 30 breweries in town. You can learn more about this at the National Brewery Center, which is worth a visit. 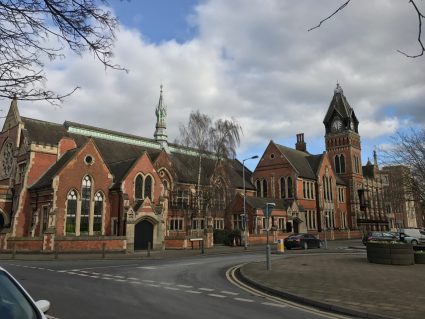 And, by the way, a major by-product of brewing is yeast extract, and it was in Burton that someone figured out a way to consume that: Marmite! That’s right, Marmite, invented and still produced in Burton Upon Trent. Sadly, no tours are available.

Another item made in Burton, though not invented there, is Bovril, which is kind of like a beef broth drink that doesn’t (any longer) have actual beef in it. You are not a proper English football fan until you have warmed yourself on the terraces with a basket of chips and a steaming cup of Bovril.

One of many small pubs in town has a motto that fits the town well.

But I digress. There are still a lot of excellent pubs in town, many of them micropubs, including the White Shield next to the Brewery Center. Also near the stadium is the Great Northern, one of a half dozen Burton Bridge pubs in town; the Burton Town Brewery in an industrial park near the stadium; and the wonderful, cozy Tower Brewery on Glensyl Way.

Other pubs, closer to the station and on the High Street, have wonderful names like the Roebuck, the Last Heretic, the Fuggle and Nugget, and the Devonshire Arms.

If you have kids, they will enjoy the Kandy Factory, where they can make stuff out of chocolate and candy. For fancy tea, check out the Langan Tea Rooms. For artisan shopping in a cool space, see the restored Trinity Church.

What I have written about them:

I have a blog post full of pictures and links — and a fish and chips recommendation — from my day wandering Burton. I also saw the Brewers in a 1-1 draw with Blackburn Rovers — and yes, I drank Bovril on the terraces that night.