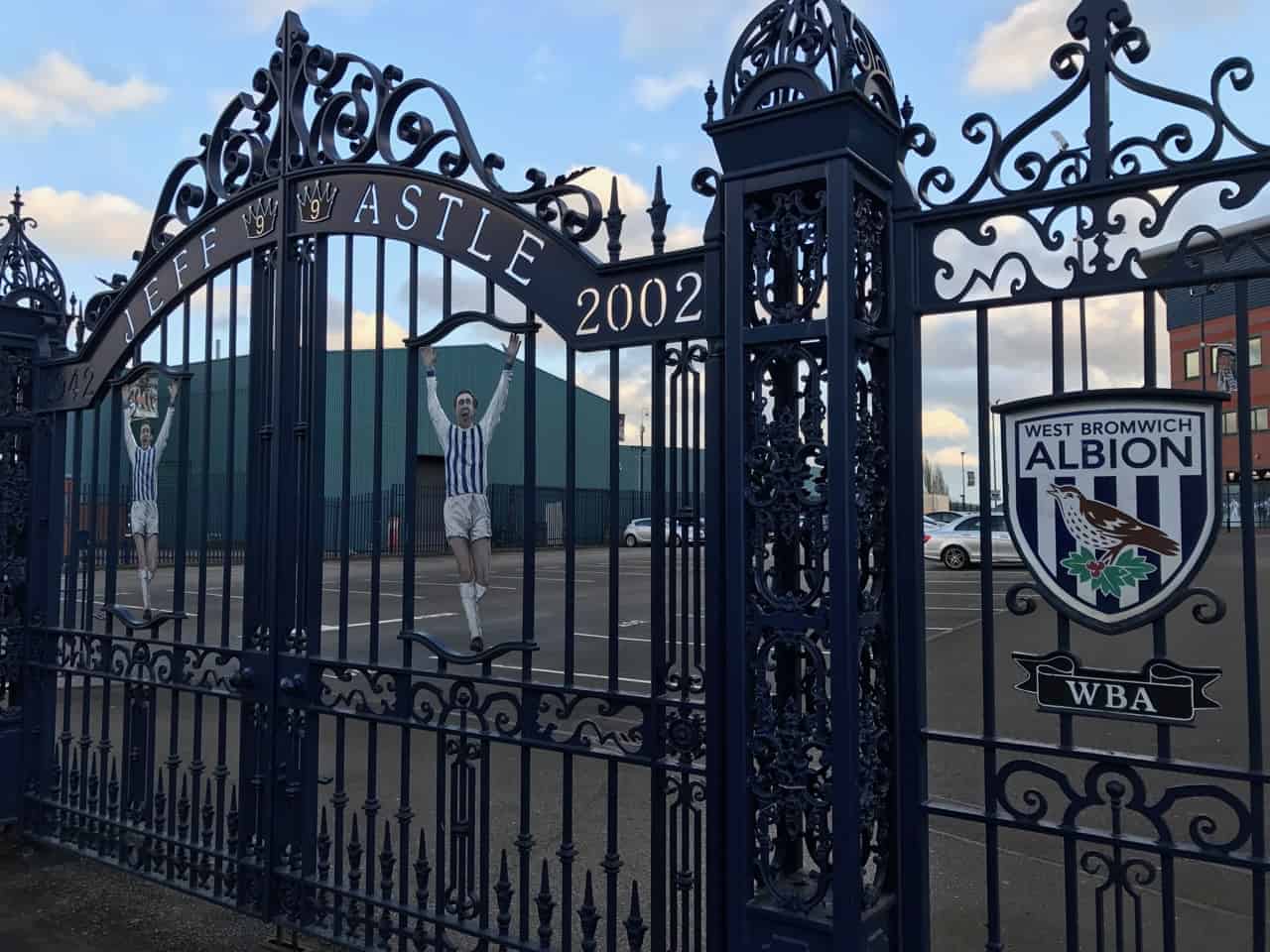 “Zombie Day” and a Badge Run to West Bromwich Albion

There are getting to be a few traditions on my English soccer trips.

One is the arrival day, which I had yesterday and included a fine version of the Standard Customs Chat.

Today it was time for two more: Zombie Day and the Badge Run. 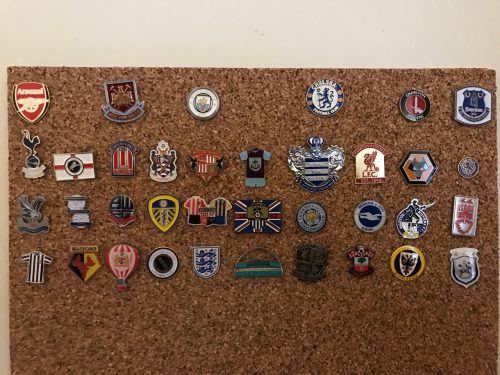 My badge collection before this trip. That hole in spot #2 is for West Brom.

Zombie Day is just the day you get to the UK, when you simply must stay awake or blow up your body’s calendar for real. I napped a little on a three-hour bus ride from Heathrow to Birmingham, then stumbled around town all day in the bitter cold and wind, and then went on a badge run to West Brom before having dinner. I then slept for 12 hours and now feel somewhat human.

What is a badge run? Well, I collect badges from all the grounds I visit, but I didn’t start doing it right away. So I missed some, including the second ground I ever went to, The Hawthorns at West Bromwich Albion. That was the wonderful night I became a temporary Baggie.

So on this Zombie Day I hopped the tram to The Hawthorns to fill the gap in my badge collection, which you can see above.

Here are some images from the experience. 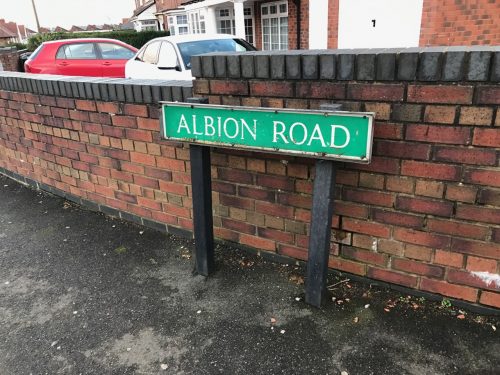 Must be getting close. Albion is an old (like Roman times) name for Britain.

The stadium isn’t in a real scenic area, but that’s appropriate. West Bromwich (part of Greater Birmingham) was the center of the Industrial Revolution, and the club was founded in the 1870s by workers from a scale factory, which still exists today.

Their nickname, The Baggies, apparently comes from the work clothes the workers would wear to the games. 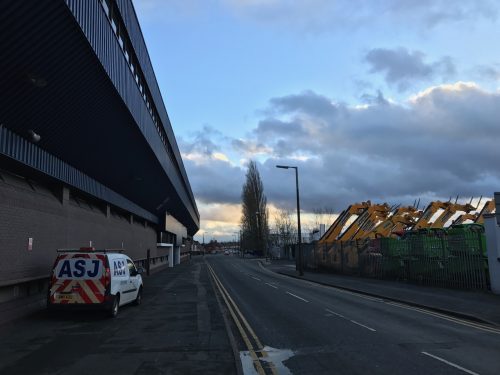 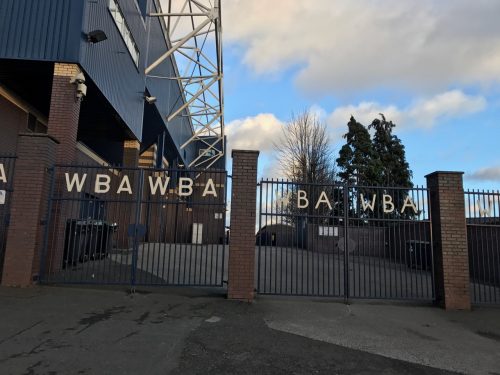 This was on a Thursday, when West Brom were in the Premier League, and there were still tickets available for Saturday’s game against Bournemouth — proving that Premier League tickets are not always impossible to get.

Update: They were relegated back to the Championship (how does that work?) for the 2021-22 season. 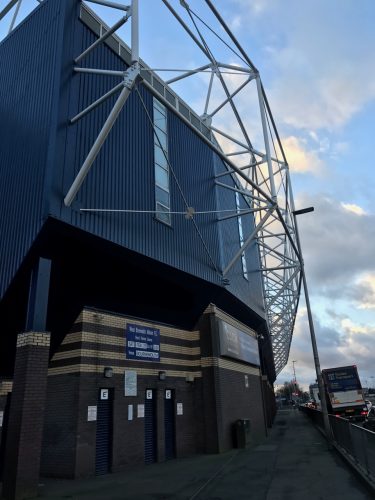 Still seats for Saturday! I will be at Barnsley, though. 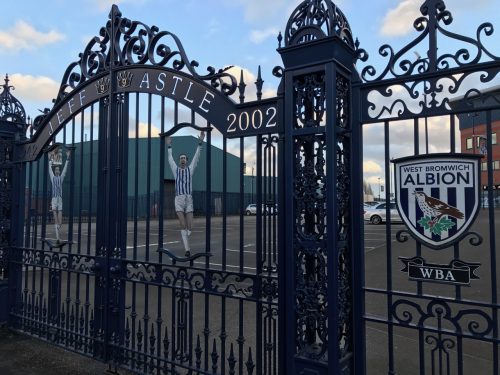 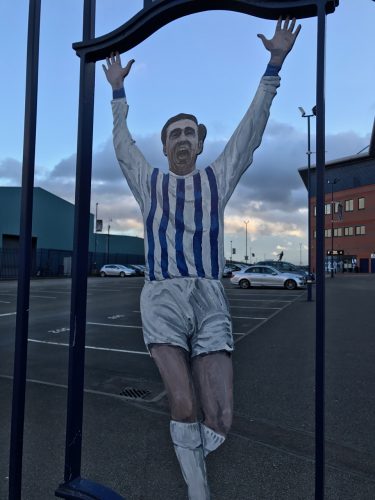 I wonder who this happy fellow is.

Every stadium has a statue, or statues, outside. West Brom’s is a guy named Tony Brown — there is also an entrance named for him. He scored 279 goals in 720 appearances, both club records, and later played for the New England Tea Men in the old North American Soccer League.

It says something of West Brom’s current stature that, while they are founding members of the Football League from the 1880s, their statue man got only one cap for England, and all he won was a couple of cups, including the FA Cup in 1968 — the last hardware they won. 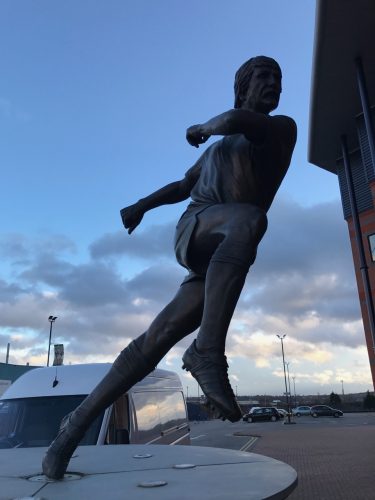 He also has an awesome 70s ‘stache in his statue! 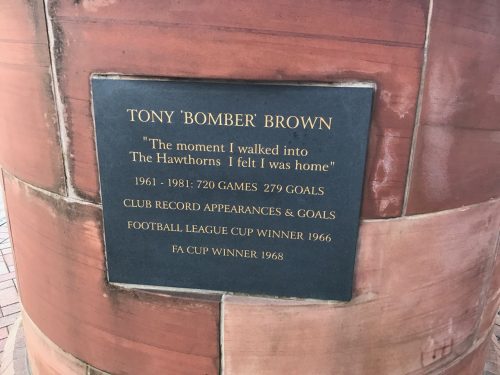 I’m sure this quote warms the cockles of many a baggies’ heart.

Here he is in action, if you’re interested (sorry about the music):

I always chuckle at what they call a Mega Store at some clubs. Once again, as is often the case on these (non-game-day) badge runs, I was the only customer in the place. 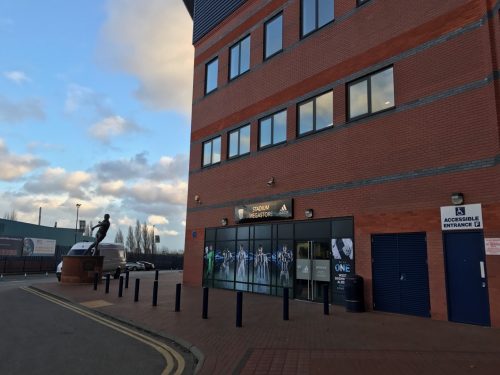 “Mega” wasn’t really what I was thinking.

But I did get my badge — the club crest with a throstle (a songbird) on a hawthorn branch. The Throstle was the pub where the founding club’s players changed, and The Hawthorns is their stadium. There is still a statue of a throstle in the ground, as well. 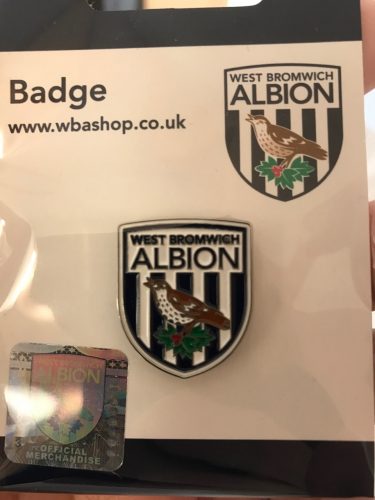 Score! And, as always, less than 3 pounds. Cheaper than scarves, I tell ya.