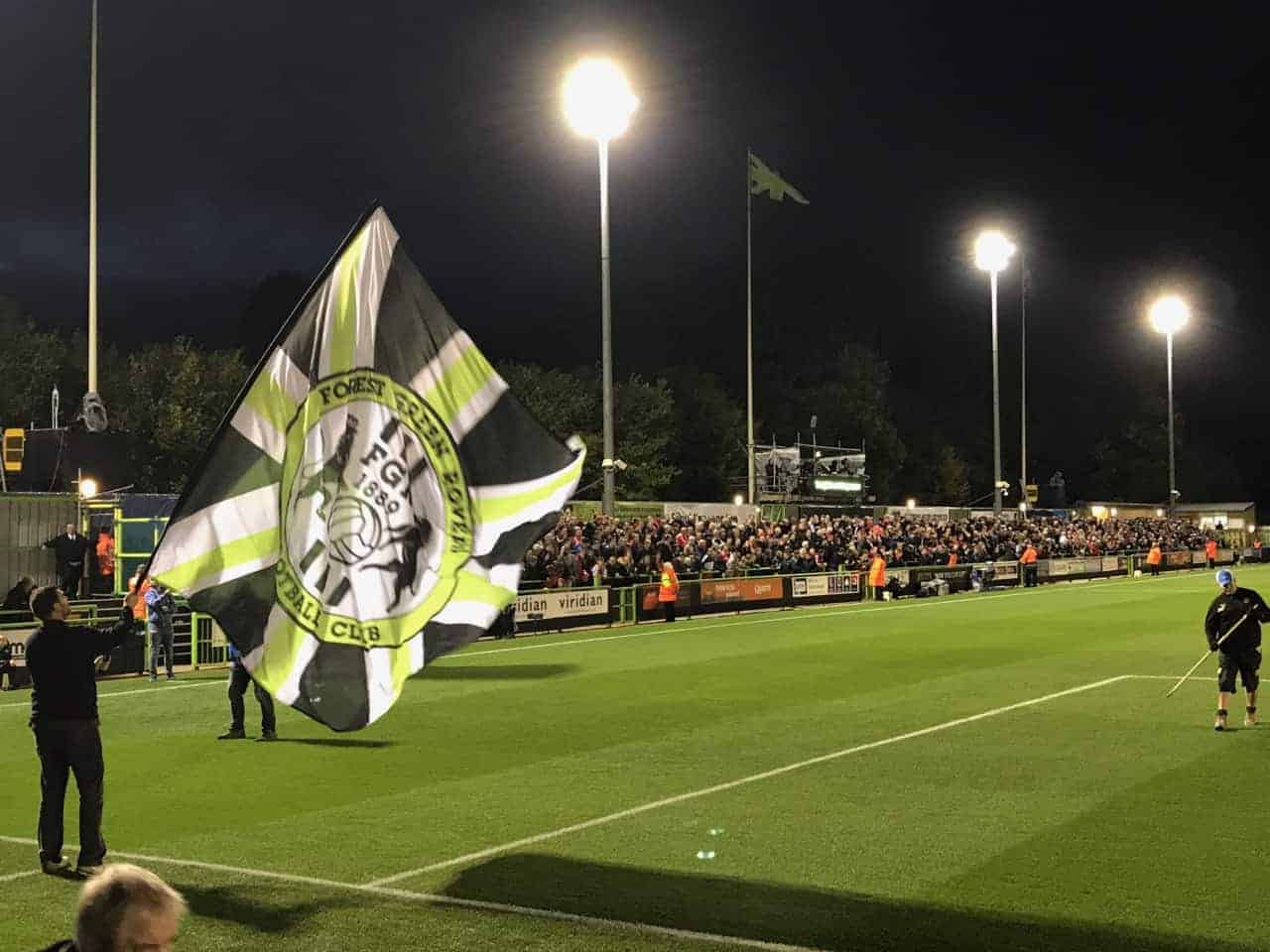 When I heard there was an English football club called Forest Green Rovers, I knew I had to go there. 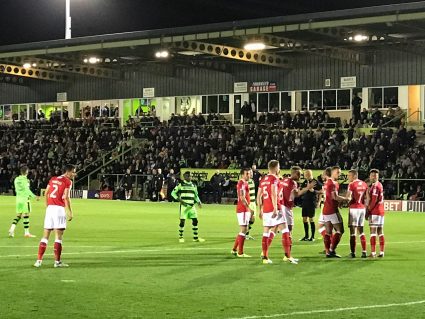 The way I discovered their existence made it even more pressing to get there: They made the Football League in 2017, for the first time in their 130-year history! And their home town, Nailsworth, thus became the smallest village ever to host a Football League. And where on Earth is this Nailsworth? In the Cotswolds!

Throw in that they had a Friday night game against a local rival, Swindon Town, and a television broadcast, and I basically planned my whole next tour around getting there.

I didn’t even know about all the eco-friendly stuff. Forest Green Rovers are a vegan football club! Their owner … well, let’s talk about him for a second. According to his Wikipedia page, Dale Vince started his sustainable energy business with one wind turbine, which he “was using to power a Jeep he lived in on a hilltop in the Cotswolds.”

From there he built up a company called Ecotricity, based in nearby Stroud, and used his small fortune to purchase a football club that had been a village club for decades, plying their trade in leagues like the Gloucester County League and the Hellenic League Premier Division against teams like Cheltenham and Kingstonian and Braintree. Yes, Braintree — I didn’t make that one up.

His money got them up, which was sealed when they won the National League playoff at Wembley last year (here is what all the leagues are all about), and here they are. Along the way, he installed solar panels, put the players on a vegan diet, switched the ground to vegan, started recycling as much as possible, putting in electrical vehicle charging stations, and doing other things to, as a sign across the roof says, “change the rules of the game.” 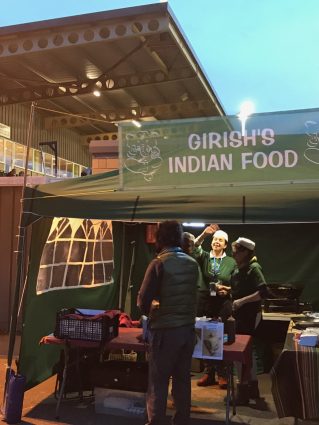 Love me some pregame Indian.

He also changed the club color to green, of course.

Not that all this went down so easily with the supporters. Folks don’t like change, football fans even less so. It’s a pretty horrible neon green, by the way — and no meat at the ground? We’re supposed to have samosas and vegan pies before the game? And when you order a coke you get … something else? 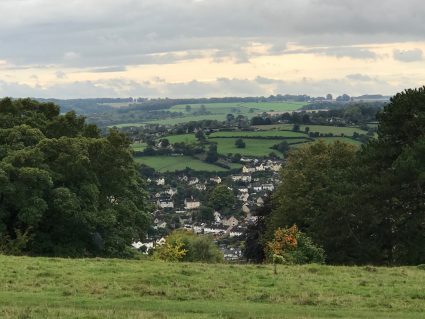 I was enchanted, all around, so I made my way out to the Cotswolds — which, if you didn’t already know, is the English countryside you have dreamed about. It’s their Tuscany, without the olive oil and wine — rolling-hill sheep country, stone cottages, winding lanes, and a 102-mile walking trail called the Cotswold Way, cutting all the way through it. It’s the kind of place with names like Minchinhampton and Wotton-Under-Edge. Many of these villages have football clubs, completely amateur all the way, really on about the level of high school football in the States. It’s just that one of them played their way up to the pros. 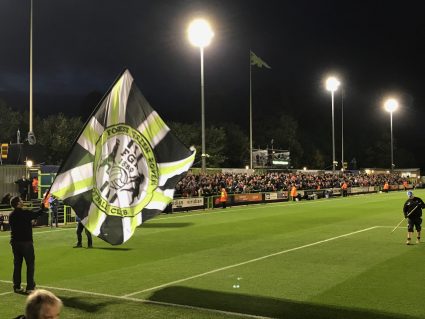 Showing the Forest Green flag to the visiting hordes.

The day of the game, I walked eight miles on the Way, form Painswick to King’s Stanley, passing meadows and forests and viewpoints and an Iron Age fort and lots of charming people with their dogs. Then I popped into the Tourist Information Center back in Nailsworth for advice on a coffee shop, finding instead a 60-year Barnsley supporter, and this turned into an hour or more of talking football. This is why I love football, by the way. Top lad, that.

One of the stories he told me was about a local — I think it was his barber — who said he’d quit supporting the club when it went vegan. He was amazed: You’d quit the club because they made a decision to keep the players healthy, they’re suggesting it for you as well, and you can still get a burger across the street!?!? 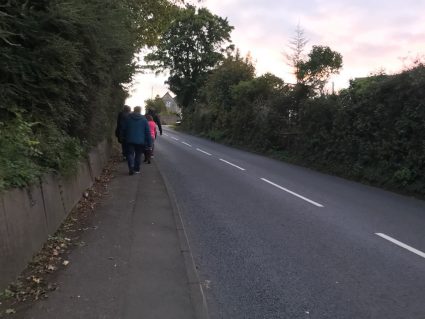 And then I headed up the hill. You do your research on Forest Green, and a lot of people talk about the hill. Apparently, having your stadium at the top of a hill makes a real impression on people, and you would think it was bloody Mt. Everest from reading some of the comments. Here I should note that football supporters are more known for eating fried fish and drinking beer than doing any proper exercise. Forest Green is a mile walk from the Nailsworth center that gains … 300 feet.

And on the way up the hill, I was reminded that, yes, I am still going to a football match. I saw somebody peeing in a side alley, heard lewd songs, saw fists shaken at people in the wrong colors (red, in this case), saw pensioners making their way with canes, saw dads with kids, and then saw the lights of the ground. Always inspiring, that.

News flash: samosas are excellent! And probably good for you, but I hardly care. They were fresh, crisp on the outside and warm and yummy inside, and cost three pounds for two of them. Among the best things I’ve eaten at a football ground, and I hear the food in hospitality (£40-60) is excellent. 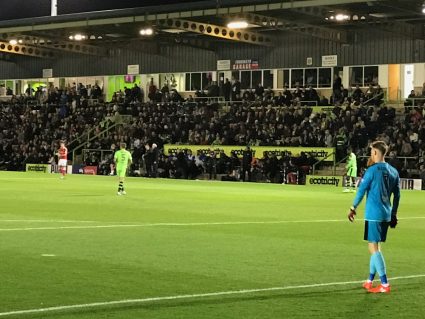 Always close to the action in grounds like this.

After that, and some signs giving you the eco-tour of the place, The New Lawn is pretty much a football ground, League Two style. Room for about 5,000 people, most of them standing, and the away supporters without even a roof over their heads. And on the home terrace I found the usual assortment of folks, the core of whom were the young lads in the middle of the stand, singing and chanting and having a go at the red horde across the way. I love the terraces.

We sang “Not bad for a village club,” and they responded “Shit on your history.” The lads went back with “Town full of smackheads,” and many wanker signs were tossed back our way. So yeah, it’s still a football ground, meat or no. 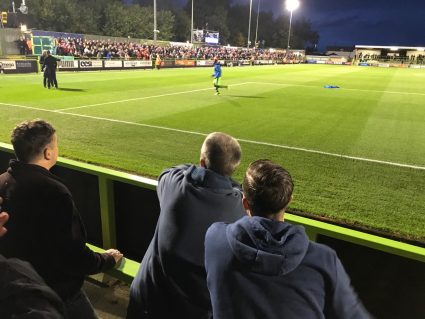 These two kept an eye on the enemy all night.

A lot of the folks at games like this, at least on the terraces, are really just out to have a go. There were two guys ahead of me who really did nothing but aim their various chants and songs at the Swindon fans, along with pointed fingers and clenched fists. At times, one of them would keep an eye on the game while simply maintaining a middle finger aimed their way. You know, just in case they looked over and needed reminding.

Several of the other usual characters were also there: Mr. Positive, always yelling well done and come on; the coach, always yelling instructions; the brooder, always with arms folded; and the kid, always looking around to learn from the veterans.

Swindon scored first — Rovers were really struggling to adjust to their new league — and one of their lot went over the railing to shake his fists at us from a shorter distance. He was immediately surrounded by stewards, although he was still smiling, and he didn’t seem to grasp that they really were going to escort him from the ground, not just back to the terrace. Another round of you’re-all-criminals song rang out from our end, along with the traditional “You Fat Bastard!”

Somewhere around here the lights went out in one or two of the stands, and the Swindon fans had a ball with that one. Even some of the Rovers folks around me joked about dodgy electricity. When they came back on, the whole ground gave it a “hheeeeyyy!”

Swindon got another goal — apparently the Rovers keeper botched it, but it’s really hard to tell what’s up from these small-time terraces — and that was that. All we could think was to sing at them, “It’s gonna rain in a minute,” and then hope it would. Serve the bastards right, making them at least get soaked.

Even that didn’t go our way, and it ended 2-0 to the visitors under mostly clear skies. Here are the highlights:

I took my scarf and badge, shot a few more pics of the ground, and then headed off down the hill. You really feel the darkness and silence around you at this ground; you’re not leaving into a neighborhood, or towards a pub, or a train station. You’re walking down a hill past darkened homes, with perhaps a few lights on the hills in the distance, and otherwise it couldn’t be more chill.

I did see the would-be hooligan surrounded by cops, still with that dumb grin on his face, as if he couldn’t believe they were about to arrest him or something. I mean, he was just having a go, right? Or maybe he just forgot he was still at a real football ground, where the cops don’t take shit. It’s an easy thing to lose track of when you’re eating samosas under solar lights on a hilltop surrounded by sheep and stone cottages.

A Photo Gallery From My Day in the Cotswolds

and My Evening at Forest Green Rovers: