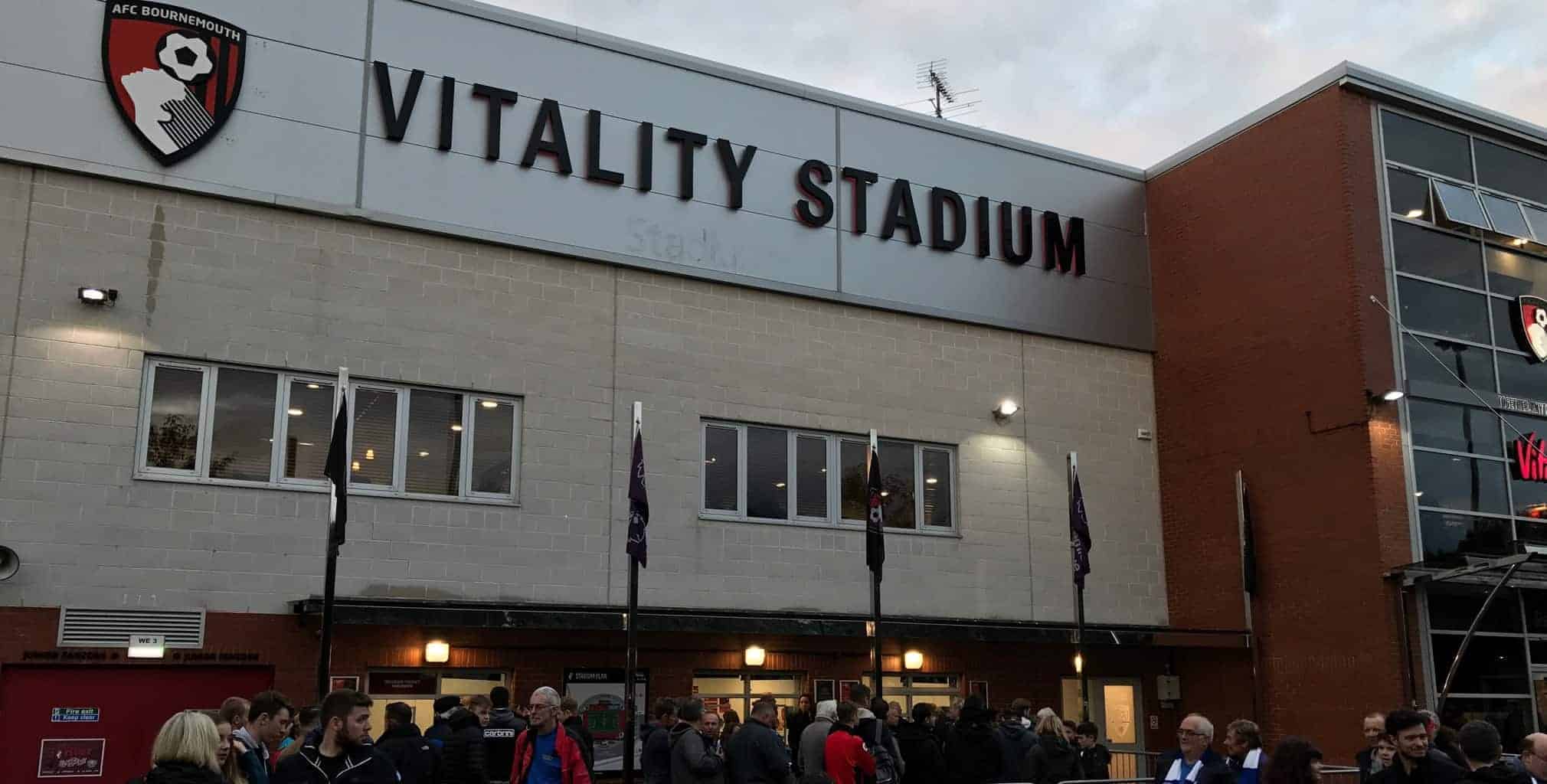 For any American fan aware of them, AFC Bournemouth were for years the definition of a Premier League fairytale.

But even that is based only on their being a small club with a small stadium that made it to the Premier League for several seasons. There is so much more to them than that — and to the town itself. Let’s have a look around. 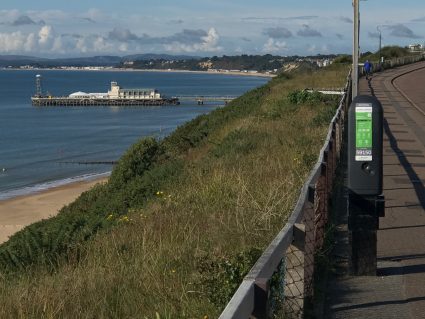 Beach view from my walk into town from the hotel.

Bournemouth was founded fairly recently, by British standards, as a resort town catering to the upper classes. It’s only a couple hundred years old and remains largely upscale and peaceful today, at least to a tourist’s eye. It was a long sandy beach, a nice pier, lovely gardens, stately homes, and access to a beautiful stretch of coast called the Jurassic Coast.

It’s in Dorset, which is of note because it’s the only part of England where people pronounce the letter r. So when somebody from Dorset says Dorset, you know they’re from Dorset. Sort of like when a person from Minnesota says Minnesota. 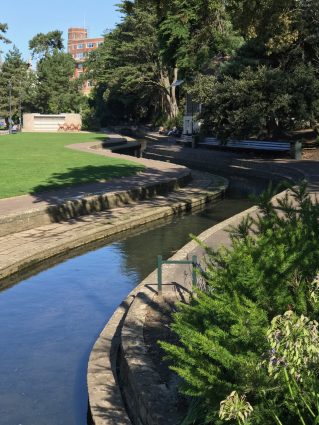 The “river” Bourne in town.

The center of town is the usual area of shops, etc, but with the “river” Bourne flowing through in a high manicured garden space that also has an aviary and outdoor art exhibit. It’s all very lovely and somewhat posh.

I took the Hop On Hop Off bus tour along the coast to the village of Poole, which is super touristy but in kind of an old-fashioned way: the waterfront has pubs and chippies and ice cream places and tour boats leaving for harbor cruises and whatnot.

I got a combo bus/boat ticket so I could ride out to the village of Swanage. Along the way, we passed a castle on an island, now owned by the John Lewis department store chain as a retreat center for staff. We also saw fabulous chalk cliffs, which I thought were only in Dover. In fact, in the film Dunkirk, the rescue boat brings soldiers back to England and they see the cliffs, thinking they are in Dover. But the skipper says, No, it’s Dorset. And he says the r, as well. 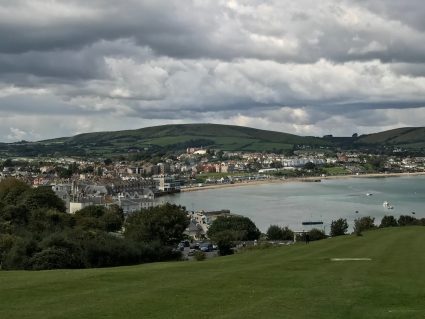 Swanage is a nice little village on its own, but in following my usual instinct, I headed for the local high spot, which in this case was a grassy headland just above the wharf, which the Coastal Path cuts through on its 100-mile journey along the Jurassic Coast. And, also by tradition, it rained. So I hung out under a tree for a bit, then wandered into town to look around, grab some lunch, and get some “real Cornish dairy” ice cream. Not sure what that’s all about, but it was quite tasty.

And then I hopped a local bus back to town; it was also open up top, so I got to enjoy more sheep country, villages, heather starting to bloom, and a ferry ride back to the mainland. A lovely day all around.

Clapping them off after a fine 2-1 win.

Bournemouth were founded as Boscombe F.C. in 1889 – Boscombe being a nearby town. They spent their early decades in places like Hampshire League, the Southern League, and eventually the Football League Third Division South. They settled into Dean Court, their current location, around 1910 and earned their nickname, The Cherries, because of their red shirts.

They won their first trophy after World War II, winning the Third Division South Cup. By 1972 they had changed their name to AFC Bournemouth and adopted their current crest, which shows a guy heading the ball; it’s said to honor Dickie Dowsett, a prolific scorer for the club in the 1950s and 1960s. 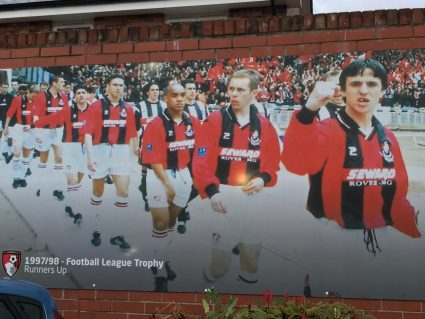 Love the guy missing teeth, the guy with his hands in his crotch, the whole thing.

It was in the early 80s they started to make a name for themselves. They beat Manchester United in the 1984 FA Cup, when their manager was Harry Redknapp. He got them to the second tier (then the Second Division) for the first time in 1987. But Redknapp left in 1992 because of the financial restrictions of the club; his replacement, Tony Pulis, did the same in 1994.

The trouble came in 2008, when financial problems forced them into administration. They got relegated to League Two, and the next year, when 10 points adrift in the relegation zone and barely staying in business, they hired a 31-year-old former player named Eddie Howe. He managed to keep them in the league because on the last day of the season, with 10 minutes to go, legend Steve Fletcher scored the winner against Grimsby Town, sparking wild celebrations.

In Howe’s first full season, they finished second in League Two. He then left for Burnley, and Bournemouth just missed out in the playoffs. In 2012, Howe returned and got them into the Championship for the following season; they finished 10th. The next season, 2014-15, they won it, gaining the Premier League for the first time ever, just six years from passing the bucket around to raise money and needing an 80th-minute winner to even stay in the Football League. 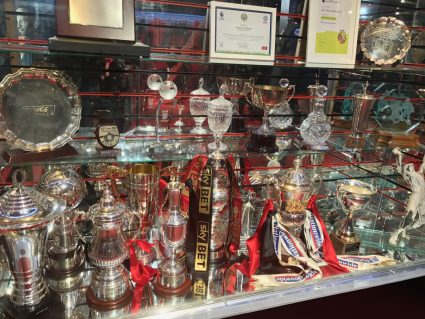 Trophy cabinet in the club shop.

Their first year at the top, they beat Manchester United and Chelsea and finished 16th. They next year year they finished 9th! Along the way they have earned a reputation, and much respect, for playing a nice brand of football, “going for it” no matter who they are playing, and doing all of this on a minuscule budget and in a tiny stadium.

Alas, they were relegated in 2020 after finishing 18th, and the next day Howe resigned. They finished 6th last season but lost in the playoff semifinals.

In 2017, I saw them play Brighton and Hove Albion, who are also from the South Coast. I assumed this was something of a rivalry, but a program seller assured me they don’t really have ill feelings towards anyone. He said it’s because they are living the Premier League dream, so what is there to be upset about. I think it’s also because people on the posh South Coast are so bloody nice. 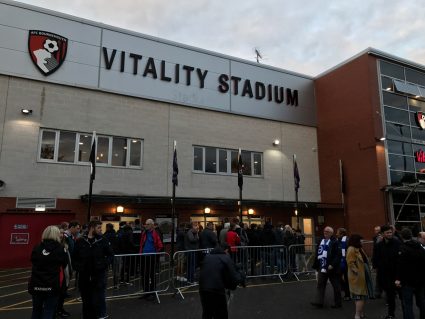 Main entrance to the Vitality.

Dean Court, as it was originally known, is now the Vitality Stadium because it’s sponsored by a local health care supply company. It still feels like a League Two ground, especially because it holds fewer than 12,000 people and is in a quiet residential neighborhood.

It was built in 2001, but at the time had an open end. When they made the Championship in 2013, they tossed up a 2,400-seat stand in the open end; it’s still there and is named for a former player, Ted MacDougall. That’s where I sat, and it truly feels like a temporary stand that they just stuck with.

They have been trying for some time to purchase the stadium and expand it. Recently they seem to have given up on that and are looking to build a new, larger stadium in the same area. But it’s a tricky thing: What if they build it and then get relegated? Would they be able to pay it off?

Be sure to have a walk around, as it’s a nice area. There’s a pub called the 1910 on the site, usually for home fans only (you’ll need to show your ticket to get in) and some fun pictures of former teams on walls around. 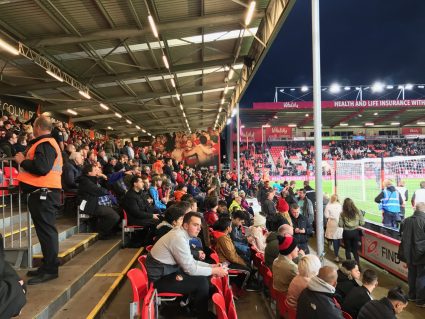 The word “cozy” sure comes to mind.

Because of its size, when Bournemouth were Premier League the Vitality was one of the hardest places to get into that I have come across. Premier League tickets are hard enough, but when there are only 12,000 of them … forget about it.

They also used to sell out all their hospitality stuff before the season — and hold a raffle for what’s left — and they don’t seem to deal with outside brokers, so I can’t do anything through my consulting services, either.

All of that should be different now, of course, with them back in the Championship.

Other than the 1910 at the ground, there is really very little nearby. The Queens Park Hotel on Holdenhurst Road seems to be about it. Otherwise, there are some nice pubs in town.

They have one that must come from the really old days, simply yelling “Boscombe – back of the net!” They also sing one about waving the red flag high in the sky, and “Eddie Howe’s barmy army” comes up a lot.

They also do a bit of flashing-light routine with the floodlights before the game, which I haven’t seen anywhere else. Go crazy, Bournemouth!

Was a come-from-behind 2-1 win over Brighton and Hove Albion, which you can read about right here. 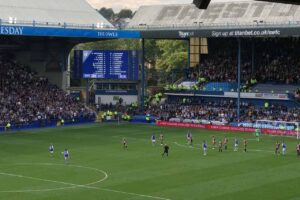 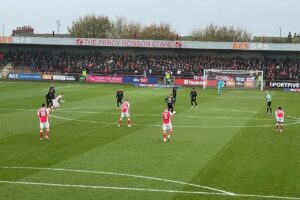 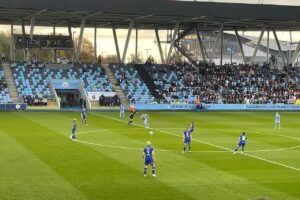