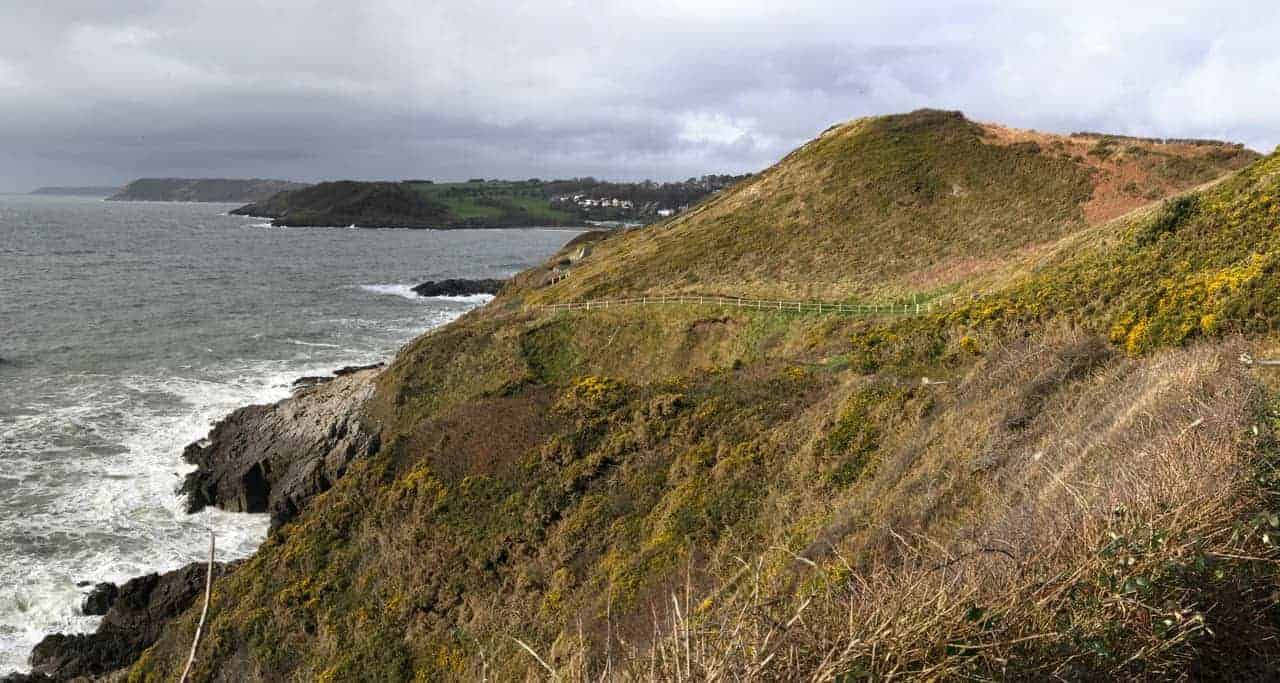 Oh, we have to go that way!

In my quest to see all the 92 soccer clubs in the Premier League and English Football League, in 2017 I made my way to see a game at Swansea City.

Here is a report on the game I saw against Burnley, when both were in the Premier League. Burnley still are for the 2021-22 season, but Swansea City are back down in the Championship. Still, let’s spend some time in and around the city of Swansea itself, which I really enjoyed. 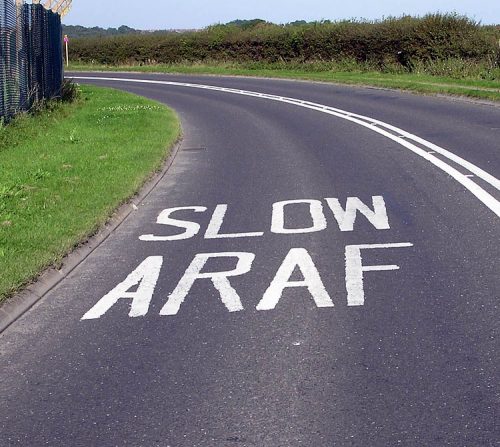 Say Hello to Swansea — and Wales

The first thing you notice upon crossing into Wales is, of course, the Welsh language. Sometimes it seems an easy translation (stadium is stadiwm, for example) and other times it just seems like a system to make non-speakers sound foolish. Cardiff, for example, is Caerdydd. Wales is Cymru, which I am told is pronounced like “Camry.” And there’s a neighborhood in Swansea called Brynhyfryd, to which I would add WTF.

In fact, the sound of it is lovely. At least, I think it is. To be honest, there were times during my 36 hours in Wales when I couldn’t tell whether I was hearing someone speak Welsh or just English with an incredibly thick accent. Maybe they were switching back and forth?

Without a doubt, the countryside is lovely: rolling green hills with hedges and sheep and patches of forest. Throw in the daffodils and heather and soaring gulls, and it is really quite welcoming – even with the sheets of water flying sideways.

We had a stopover in Cardiff, which (don’t tell Swansea fans) looked like a more interesting place to visit. It has a university, plenty of lovely old homes, and (I’m told) a fine Museum of Welsh Life. (Get to know Swansea’s great rivals, Cardiff City FC, here.) 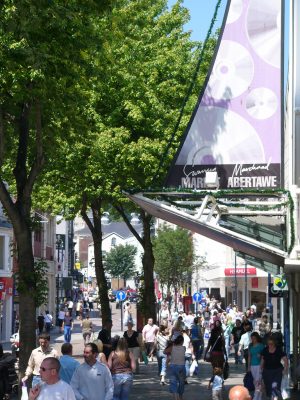 Swansea Center, as it did not look the day I was there. (via StormyDog on Flickr)

An hour down the road, we were in Swansea, a very old port town which was a center of copper making, then steel making – both of which made it a target of the Germans during World War II. They basically destroyed the center of the city in three nights of bombing in February 1941, dropping an estimated 1,273 high explosive bombs and 56,000 incendiary bombs. Ironically, the Germans largely missed the docks they were aiming for, and Swansea remained an important port through the war.

This central part of the city, rebuilt since then, really looks like plenty of cities that used to be something (steel, cars, railroad, farming) and now isn’t much of anything. Not that it’s an unpleasant place, just that – well, as a cabbie told me while I was there, it doesn’t have much going on for a tourist, but they are working on some things. One possibility, it seems to me, is that its affordability, and proximity to the sea, will make it attractive as a place to live. When you start seeing hipsters and artists walking around like they do in Bristol, you’ll know what’s up.

The main attraction in town is the market, which was rebuilt after the war. There’s been a market on the site since the Middle Ages, and the current building dates to 1961. It was the first place I went from the bus station, and I loved it. You can get lots of Welsh specialty foods in there, like laverbread (made from boiled and pureed seaweed!), local lamb and beef, and Welsh cakes, which are basically a cross between pancakes and scones, with fruit in them. 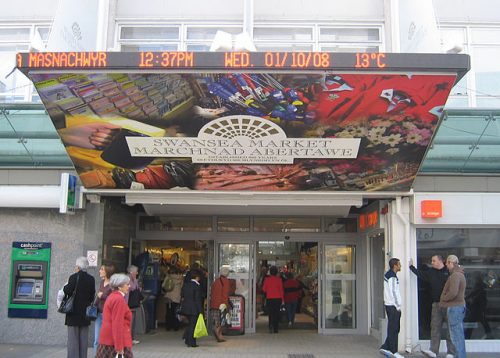 The Swansea Market — again, note the Welsh words for market and Swansea. (via Lil on Flickr) 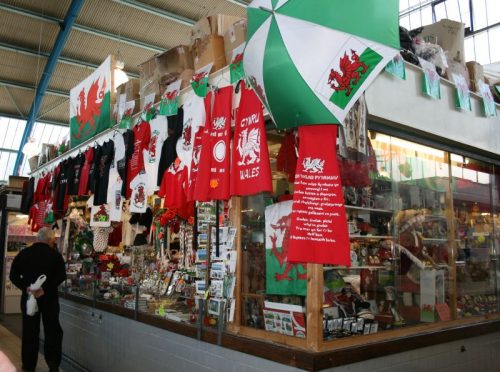 I actually bought an awesome Cymru rugby shirt at this stand. (via Lil on Flickr)

For me, Swansea’s main attraction is this: Leading out to the southwest of town is a long, green strip along the shore, probably five miles long, that is one big park, with a walking/jogging path, beach access, and even a foot golf course. 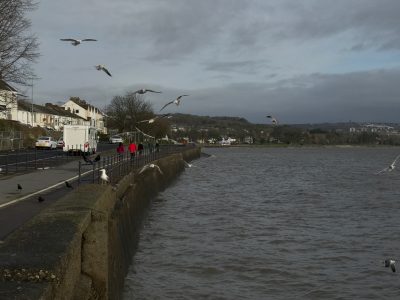 Looking back towards Swansea from Mumbles.

It was also the home of, they claim, the world’s first passenger railway, opened in 1807 and closed in 1960. Some of the old cars are in the waterfront museum, which I couldn’t bring myself to visit. Used to be industrial, lots of big machines, there was a war, old pictures … got it. After half a dozen trips to the UK, I’ve seen that story.

At the end of this green strip, at the beginning of a famously scenic area called the Gower Peninsula, is a town actually called Mumbles. And, really, how can you not go and visit Mumbles?

I got a day bus pass for just over 4 quid (I had to bite my tongue when I requested a ticket for Mumbles) and hopped a #2 bus along the coastline — a really great public transit ride!

I also had, via TripAdvisor, a recommendation for breakfast at The Kitchen Table Café. It’s a cute little place that served the best breakfast I had on this trip, so I’m passing along the recommendation. (Sadly, looks like it’s permanently closed as of 2021, but maybe it will come back.) 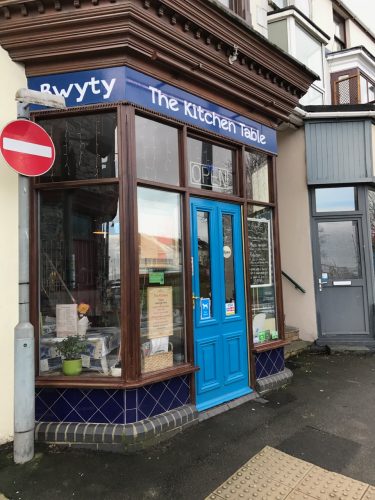 The Kitchen Table Café, Mumbles. (Again, see the Welsh on the left?) 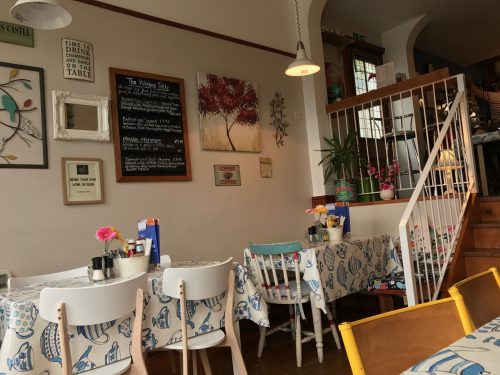 Interior of the café.

Then I just kept walking along the “prom” towards the famous pier and lighthouse. Some of it was standard beach town scenery, with fisherman, and the weather alternating between sun and run-for-cover, and some of what I saw was … well, see for yourself. 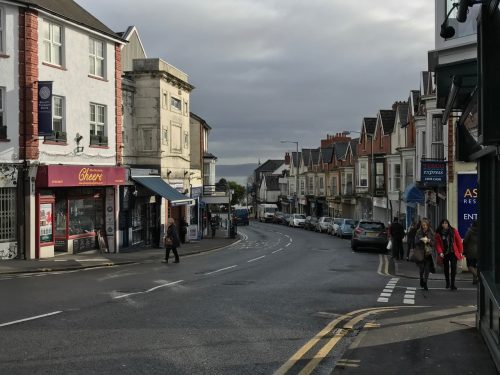 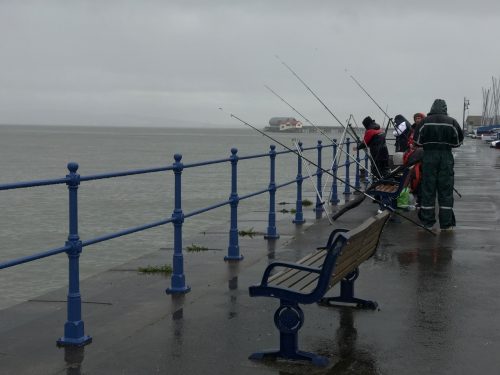 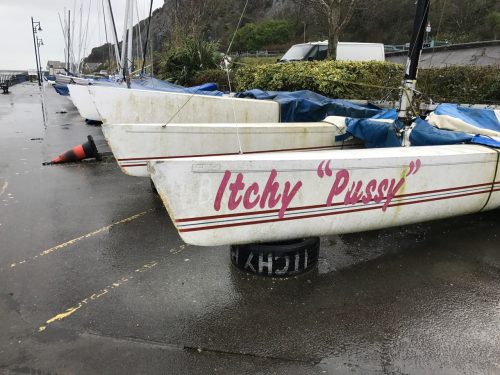 The pier, almost abandoned in this weather, was the Standard English Pier: a boardwalk with an old-fashioned restaurant, a gift shop and/or museum (closed), and an arcade. 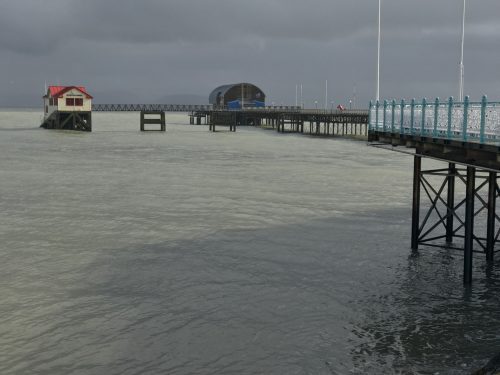 The Mumbles Pier during an actual pause in the rain. 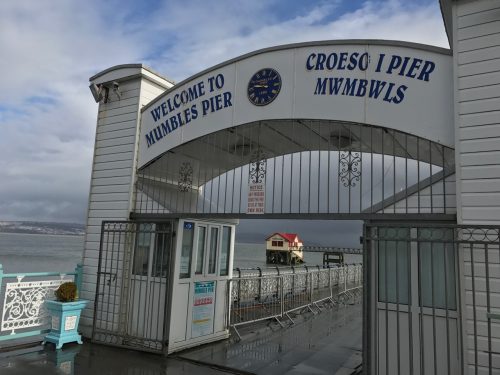 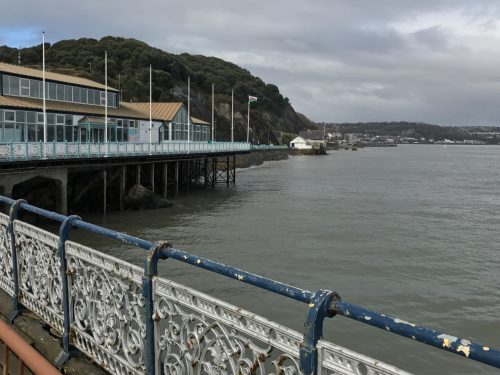 Looking back from the pier. 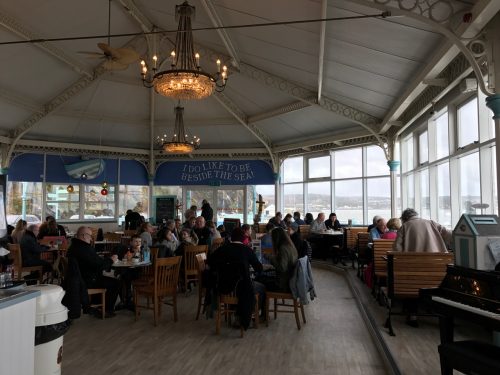 Lovely restaurant, with all the smart people sitting inside. 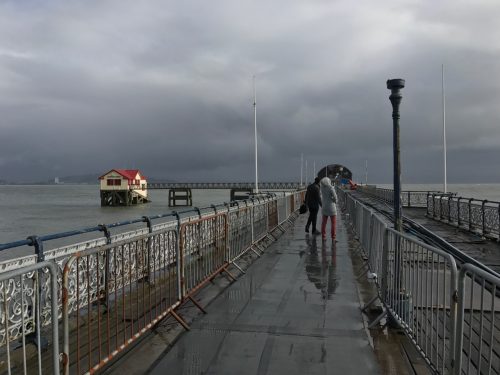 That’s a lifeboat shack on the left. 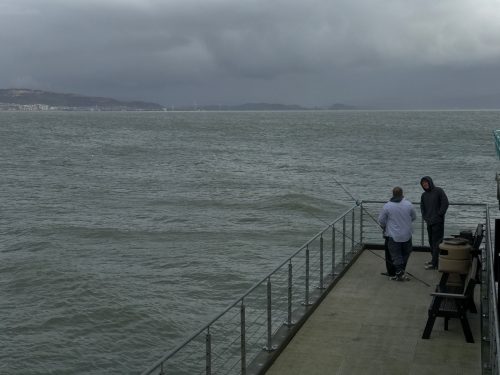 The lighthouse sits on one of two small islands, which led to the name Mumbles. It’s thought to come from the French mamelles, which, of course, means breasts. Leave it to sailors of every era to see two hills and name them for tits. 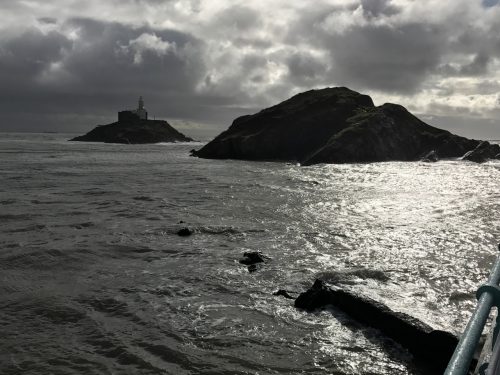 I was about to head back when I noticed some benches on a hill; they looked like they might have a view beyond, and I could also see a set of steps headed up there. Turns out the steps were part of the 870-mile-long Wales Coast Path – so, along with the Trans Pennine Trail in Barnsley, I can now claim to have dabbled in two of the UK’s famous long-distance trails. 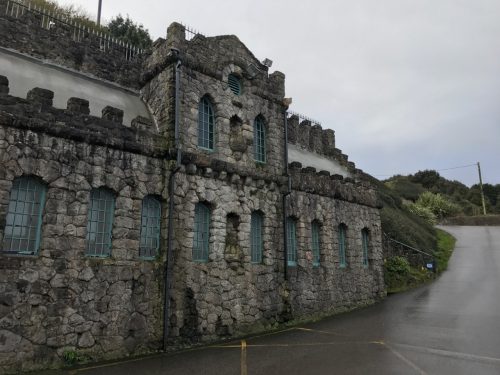 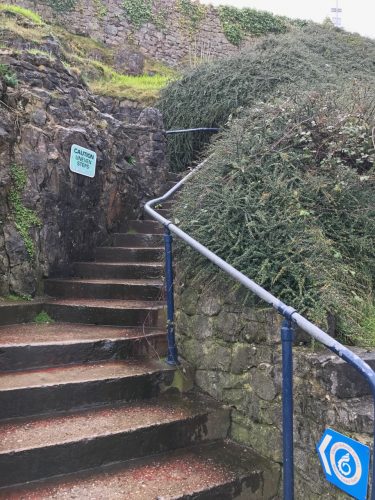 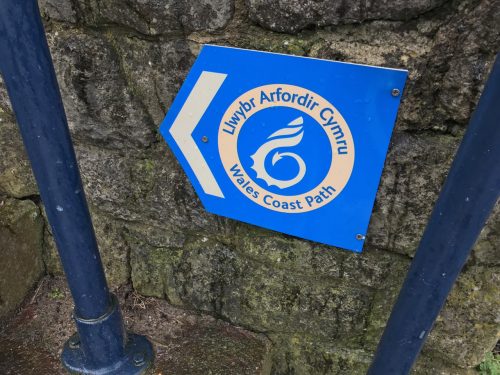 And oh, am I glad I did. Not only does the scenery improve dramatically up there .. 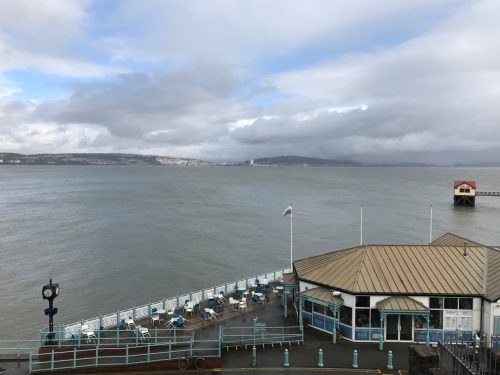 Looking back from the stairs. 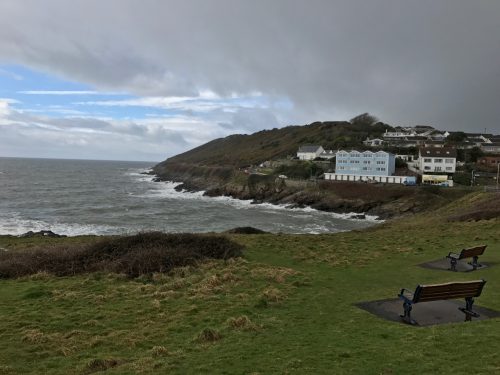 … and there was some kind of goofy, old style stuff … 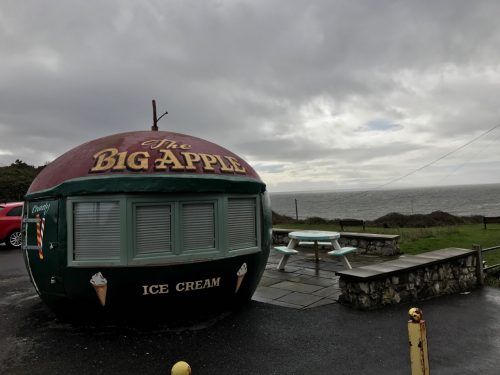 Google also says this is permanently closed in 2021. Sigh.

… but the trail keeps going – an offer I can almost never refuse. Added to the sun actually peeking out, I had a lovely hourlong stroll along the paved trail before I had to turn back to the end of the bus line to head into town.

After all, I had a game to get to. 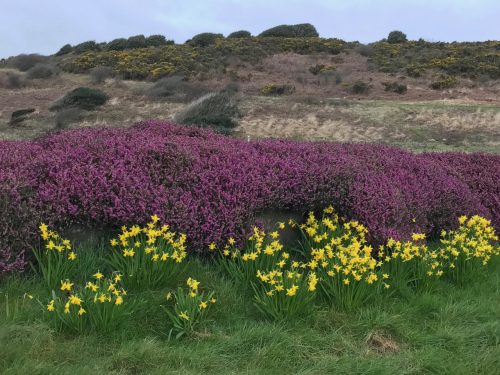 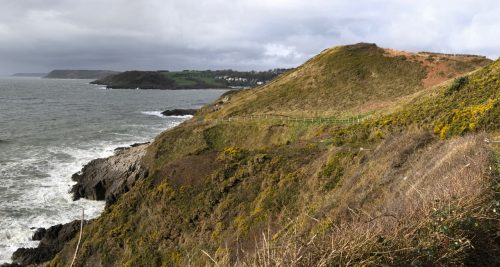 Oh, we have to go that way! 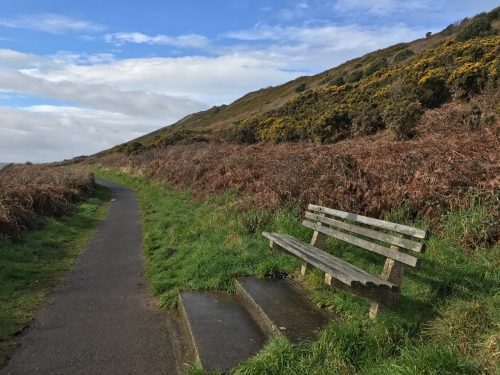 Getting there: About three hours by train from London, five by bus with a change in Cardiff.

Stay: There is a Travelodge near the bus station and elsewhere an Ibis, Marriott and Mercure. Otherwise, you might just stay in Cardiff … and keep that secret from Swansea fans.

Eat: I had a fine meal one night at the Belle Vue Bistro (three courses, mineral water and coffee for 27 pounds) and a surprisingly good Chinese meal at My Favourite Authentic Chinese Restaurant for about 13 quid.

Drink: There are some clubs and pubs along Wind Street, which in Wales is pronounced like you think they’re saying “wine.” Look, in particular, for the No Sign Bar, highly rated for craft beers.

Do: Other than a Swansea game? The market, Mumbles, and the peninsula are the things to do. Mumbles can be reached all year by bus #2 from the main station in town. In summer that bus goes all the way to Caswell Bay, which is supposed to be the scenic highlight of the whole place.