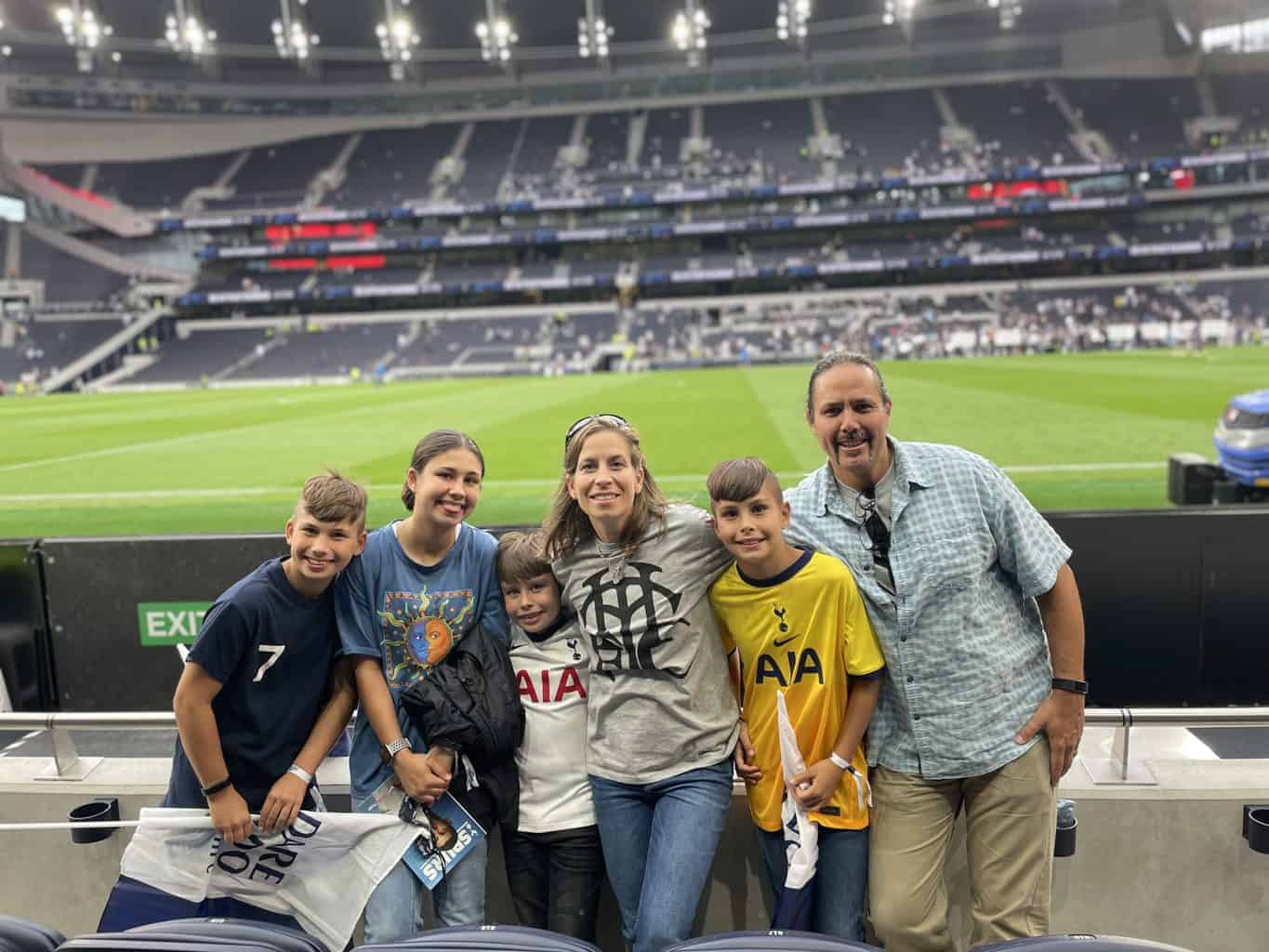 After having their trip for March 2020 postponed due to Covid, the Garno family traveled from the US to England for a groundhopping adventure in August 2021. They went to an EFL Cup game, a League One game, and a Premier League season-opener featuring Manchester City at Spurs on Sunday, August 15. They purchased six seats in our lower tier Tottenham Hotspur hospitality package.

This Reader Report was written by Greg Garno. It has been edited for clarity. All photos and videos are courtesy of the Garnos unless otherwise noted.

First of all, we did the stadium tour on the Thursday before the game, which was even better than we expected. The fact that it’s self-paced with the audio devices to guide you through, but that there are also guides at the various stops to answer questions and provide additional assistance; it really was perfect. We took our time going through and soaking it all in. It was a great prep for the game. 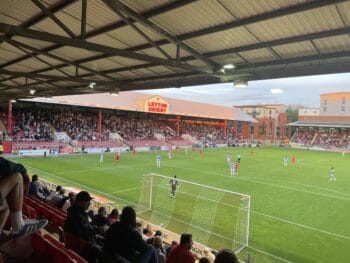 As my Google review noted, we also checked out a couple of other London-area grounds based on Groundhopper Paul’s reviews and recommendations. Leyton is a cool little neighborhood and their game against QPR was really good. It went to PKs, and we were seated just 12 rows up behind the net where they took the kicks so it was awesome. We stayed in North London in Clerkenwell, so it was also easy to get to. The Wimbledon game was fun, too. A good match that they had to come back to draw 3-3 and the crowd was very into it. It’s a nice stadium, but a bit removed from anything else. We had second-row seats, though, and it was an absolutely beautiful day so no complaints there at all. 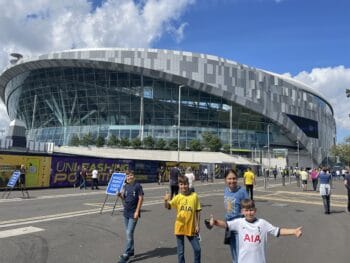 Excited to be arriving extra early for our Club experience on a picture-perfect day.

Since we were staying in North London a five-minute walk from Farringdon Station, it was easy to get to the Spurs game, especially since we had figured it out when we went for the stadium tour. We got there just about as early as we could, about three hours before game time, so we could take advantage of the hospitality. The food was very good, and they brought plenty of it around, and it was easy to get drinks with no lines to speak of. We had fun reading the programs, eating, and drinking while watching the earlier match on TV. Then we decided to go see where are seats were.

We couldn’t believe it when we went in and were told we were in the FRONT ROW! Our kids were so excited, maybe only slightly more so than we were. It worked out especially well since we have little ones who would have had to stand a lot and not be able to see everything, so the front row was truly perfect for us.

The game was amazing, and when Son scored he did his slide right up to where we were sitting. Here’s the photo proof: 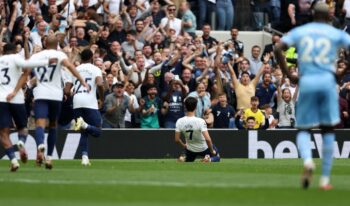 You can see the six of us over Son’s right shoulder. Me, our three boys, then Jenn, my wife. You can barely see our daughter, Olivia, behind the ball boy. She was still sitting because she was rooting for Man City. 🙂 We had a friend send us the link to the Son celebration photo after the game. He didn’t even know where our seats were. We had other people in our soccer club approaching us for weeks after the game asking if that was us they saw at the Spurs game on TV. We did not expect that, and though it was a little embarrassing, but we were quick to point out that it was a once-in-a-lifetime event for us, lest they think we regularly hobnob turf-side at major EPL matches. We also were sure to tell them how we got such amazing tickets. To everyone I tell the story and show the picture, I say let me know if you’re ever considering going and I’ll hook you up with Groundhopper Guides. 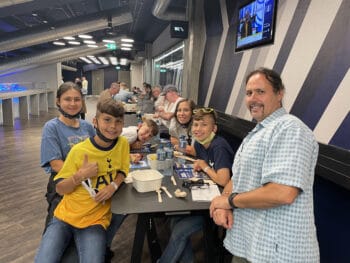 Enjoying the pre-game food and beverages in the Spurs hospitality lounge.

One note on the dress policy. We were a bit worried when we were looking over the ticket info after arriving in London to learn that there was a dress code for the seats. “Smart casual” dress required, meaning no shorts and no trainers. We didn’t pack anything other than comfortable walking shoes, which for us is, of course, trainers. We also had to go buy a pair of pants for one of our boys. I decided we’d chance it with our shoes, but we had everyone wipe them down thoroughly so they’d at least be relatively clean. I also made sure to find a local shoe store where, in a pinch, we could get shoes near the stadium if they wouldn’t let us in. As it turns out, they weren’t enforcing those rules even a little bit. There were lots of people in the hospitality room and surrounding seats wearing shorts and trainers, and whatever else people wanted to wear. Once we got in it was all quickly forgotten of course, but it did cause a little bit more worry and planning before the match. It would have been good to know that detail – that there was a dress code but it’s not really enforced – before making the trip. It may have been in the info you sent but it’s worth highlighting in the future.

Note from Groundhopper Guides: At the time the Garnos went to the game, we did not have any information about possible dress code enforcement in our hospitality customer correspondence. We have since added it thanks to their helpful feedback!

I appreciate the help in locating a place to print the tickets. If I recall correctly, though, we did not end up having to print them and I was able to present them from my phone.

Note from Groundhopper Guides: Tottenham Hotspur are now issuing digital tickets that must be downloaded to a mobile device via Apple Wallet or Google Pay. 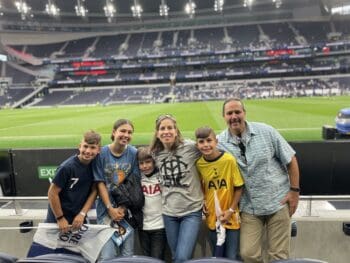 All smiles after Spurs beat City 1-0. Even our daughter, the City fan, was blown away by the experience we had.

Outside of that very minor glitch with the dress code, we couldn’t have been more happy with our experience with Groundhopper Guides. This is especially true since the whole trip was originally planned for March 2020 and had to be postponed due to COVID. Groundhopper Guides’ responsiveness during that very weird time was greatly appreciated, and for that alone you have a loyal customer for life. If we have the means to do it again, I’ll be booking our next football adventure through you. The kids are already talking about Italy, or Germany, or Spain. Someday, maybe…

Thanks to Greg Garno and the entire Garno family for sharing their experience!

Are you looking to see a Spurs home game? Fill out this form, and we’ll get back to you shortly.