“Among the Thugs” and Inside the Heart of Violence

As long as I have been into soccer, I have heard about Bill Buford’s book, Among the Thugs. But I never read it because I just wasn’t interested in tales of the bad old hooligan days.

Now that I have read it, I am somewhat glad I did, mainly because it was not at all what I thought it was.

There seem to be two different kinds of “hooligan” books: the “I was a hooligan” diary and the “what does it all mean” take from a sociologist or somebody — neither of which I can stand. Thankfully, Among the Thugs is neither.

It seems that Buford, a talented writer and committed researcher, saw hooligan culture up close and wondered what could possibly be driving it. So he did something quite extraordinary: he dove into the middle of it, following a group of Manchester United “lads” on adventures both domestic and continental. The closest comparison I can think of is Hunter S. Thompson’s book Hell’s Angels: A Strange and Terrible Saga, in which the not-yet-famous “gonzo journalist” became a de facto Angel for a time, writing about it from the inside.

Buford does the same thing here, freely admitting that he engaged in violent sprees along with his — his what, exactly? His friends? His cohorts? His subjects? This ambiguity gets at the heart of what the book is really about, as well as why I only “somewhat” enjoyed it.

Buford doesn’t glorify or simply condemn the violence; he just takes it at face value and tries to understand it. As such, he is horrified by the people and their acts. He tries to answer a simple question: why and how does a crowd of people, many of them perfectly reasonable, turn violent? To answer this, he joins in and, at times, enjoys himself. And he finds them and their lives funny and pathetic. And in the end, like Thompson with the Angels, he takes a thorough beating for his efforts.

The point is, this isn’t a hooligan book, much less a soccer book. It’s not even a book about those difficult times in England. It’s a book about crowd violence, written from inside the crowd, while not settling on any simple answers about what it is, why it happens, or what should be done about it. As such, it’s impressive, well-written, and successfully swerves from horrifying to hilarious without ever losing its honesty. Some feat, that. 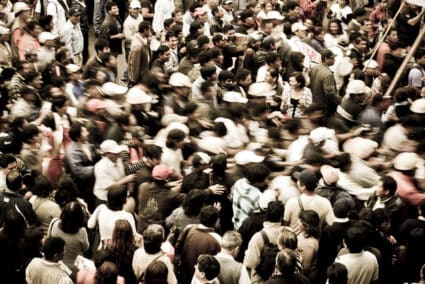 Why does this happen? And what’s it like in there?

And yet it’s a very difficult read — beyond some narrative quibbles I could take, like with the time he wastes among radical far-right skinhead types. I found myself sympathizing with Italian cops who simply began to club every English-looking person they saw, and I think I would have forgiven them shooting hundreds of people dead in the street, such was my disgust at what I was reading. And yet I also could have some sympathy for individuals in that crowd, having just spent several hundred pages hanging out with many of them.

That’s when you know you’ve spent time with a good writer who knows his subject and sings about it well; like Thompson among the Angels, Buford shines a light that brings from the darkness societal and human ills as well as your conflicted feelings about all of it.

Violence is an illness; it’s also part of human nature. And yes, it still pops up occasionally at soccer games, but in England anyway, at nowhere near the level Buford describes. If you want to try and understand crowd violence, while also learning about the bad old days in England from a unique perspective, give Among the Thugs a read.

Here’s my whole list of soccer-related books, films and programs.