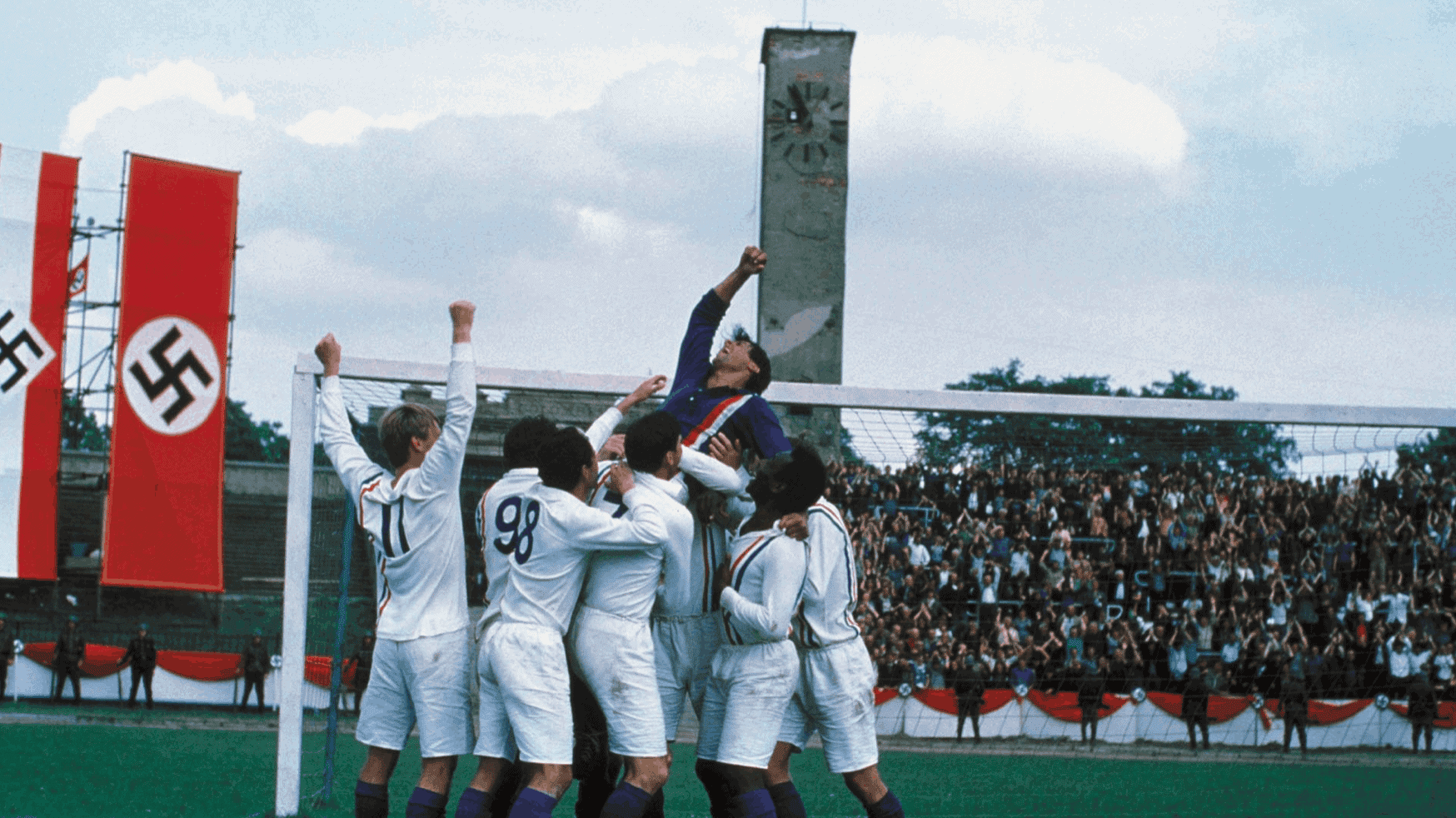 “Escape to Victory” is a Classic Soccer Movie

Whether it’s a football film called Escape to Victory, as Brits would know it, or a soccer movie called Victory by Yanks, the 1981 motion picture with Sylvester Stallone and Michael Caine is one that soccer fans should watch. 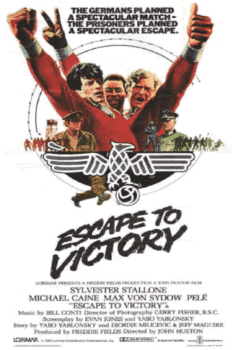 In this UK poster, the movie was called “Escape to Victory.”

Even as I write that, though, I find myself wanting to add some caveats. It’s not a particularly good movie, but it’s a pretty great football film. There are some solid actors in it, which helps, and there are some really famous footballers in it, including Pelé, which also helps. But it also has Sly Stallone, who is neither, and whose presence makes the whole thing lean a little ridiculous.

Even that, though, can make it a fun watch. Let’s see Michael Caine try to be athletic! Let’s see Stallone try to act! Let’s see some old-school soccer in an early-20th-century stadium. Or let’s just enjoy an uplifting story with some serious footballers in it.

(Escape to) Victory: The Plot

The supposed premise of the film is an event that probably didn’t actually occur. Legend (or more likely Soviet propaganda) has it that a team of real footballers in Kiev during World War II were forced into a game against a German team and had to choose between winning the game and being shot or losing and being treated as public relations fodder. They chose the former and all got shot — except they didn’t. The real team won a series of games against teams of Germans before the league was disbanded and they all went off to the camps, where at least four of them were, in fact, murdered.

With that as a starting point, and with good actors and the firm hand of the legendary director John Huston, Victory could have been a more serious movie. But since it was an American-made film, some kind of happy ending was required. So instead you get a plot that goes like this: The Germans want a game against POWs to show how magnanimous and superior they are, and the POWs want a nice game of footy. It’s agreed, except that German superiors fix the game to make sure they win, and the POW superiors decide everyone should escape at halftime. The game comes off, the Germans are up 4-0 after a brutal first half… and, well, let’s not spoil anything, eh?

Watch Victory in the US on Amazon Prime Video 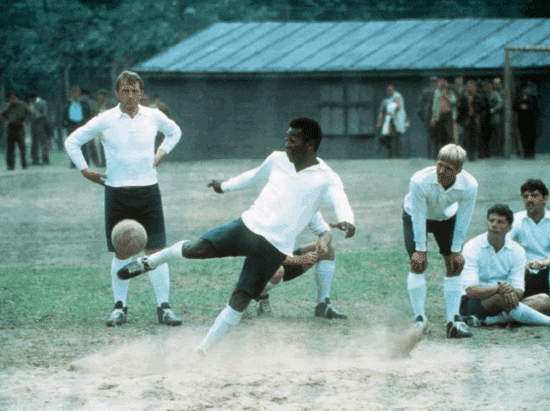 Victory is to a great extent about the game of football, as Pelé demonstrates here.

The Making of Victory

This being a Hollywood production, it had to include a famous American. Enter Stallone, fresh off Rocky II and among the biggest stars in the business at the time, as Captain Robert Hatch. On set, he seems to have exhibited many negative American stereotypes. Stallone knew nothing about soccer, but ignored the advice of English keeper Gordon Banks until he hurt himself. And he was arrogant, demanding his character score the winning goal despite being the goalkeeper (they let him save a penalty instead), and also jetting off to Paris with his entourage to party on non-shooting days instead of bonding with the cast and crew. 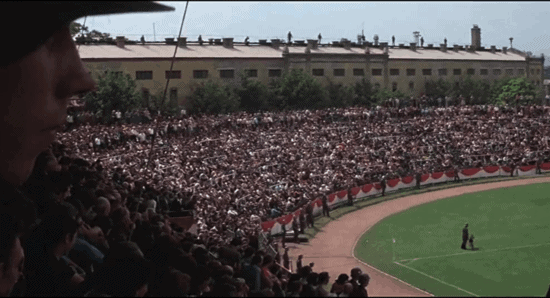 This former Hungarian stadium posed as the site of the Paris finale.

The POW camp set was built (over three months) in the Budapest area. In the movie, the match was supposedly played in Paris at the Colombes Stadium, which hosted the 1938 World Cup Final. But the filmmakers needed a place without floodlights, so they chose the Hidegkuti Nándor Stadium in Budapest, which was demolished in 2015, for filming.

Game scene from the film.

The making of Victory is all about football, which is really well done. Soccer as a sport perfectly combines the individual player’s talent — running, jumping, the flicks and tricks — with the collective of team play. All of it is captured here, even better than how He Got Game did with basketball and The Natural did with baseball.

They used super slow-motion cameras, which were quite new at the time and also very expensive to operate. So the footage, choreographed by Pelé and staged with famous international players like Bobby Moore (whose statue is now outside Wembley Stadium) and Osvaldo Ardiles, a 1978 Argentine World Cup winner, is sublime. Wait til you see Ardiles’s “rainbow” move! 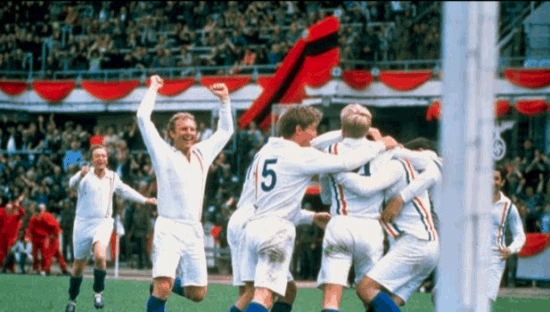 There’s also a scene in which Pelé is called upon to perform a bicycle kick — because, you know, Hollywood — and supposedly they only had three takes to get it right because of the expense of running the camera. And it had to happen at the end of an intricate passing sequence. Being Pelé, even at age 40, he nailed it the first time. The story goes that the crowd’s celebration was 100% genuine.

The Bottom Line on Escape to Victory

I’m not a film critic, but after I made it this far writing this post, I read what the actual critics had to say about the movie. And I’m not (entirely) bragging, but they basically agree. It’s a solid film that could have perhaps gone more into social and psychological commentary but settles for a good kickabout, some star appeal, and an uplifting feel, while showcasing some great footballers doing their magic in a way which lets us really appreciate it.

That Victory also gets one over on the Nazis certainly doesn’t hurt.