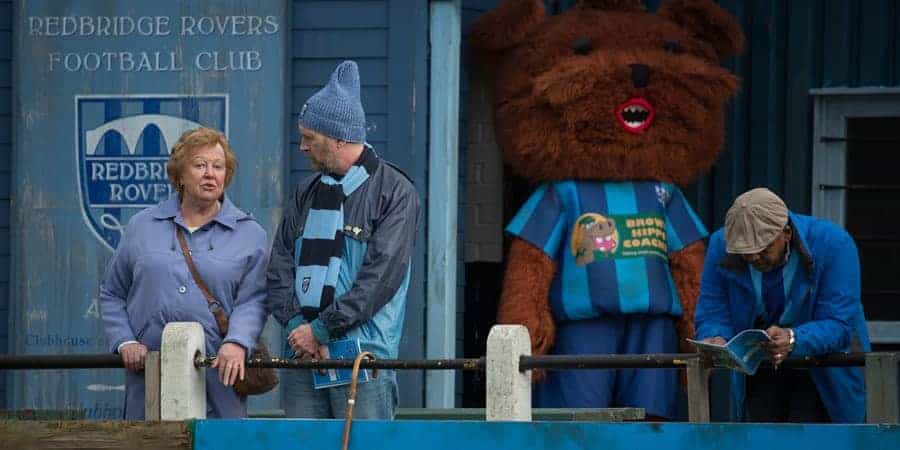 “Rovers” on Amazon Prime is a Jewel of a Football Show

I recently stumbled into this delightful little show called “Rovers,” from 2016, and it’s one of my favorite football distractions I’ve found during Covid Time. 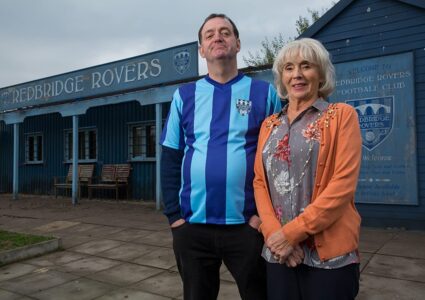 The obsessive fan and the chief barmaid.

I grow weary of the superstar bios and the behind-the-scenes looks at big clubs. And I just don’t have much interest in watching old games, unless it gives me a sense of what the atmosphere and old grounds were like.

But “Rovers” (watch it on Amazon Prime) is something else: a six-part comedy series set entirely in the bar of a tiny club in about the 8th tier of the football pyramid. “Redbridge Rovers” don’t really exist, but they are a charming stand-in for clubs at that level, where the club shop is in a trailer, the bar serves tea and cookies at halftime, the players lounge is just next door, and a handful of dedicated supporters keep the whole thing going despite attendances averaging in the dozens.

The actual ground where the external shots are filmed does exist, by the way. So I will absolutely be adding New Mills AFC of the North West Counties League Division One South to a future groundhopping run.

In these six half-hour episodes, though, no one is ever seen actually playing football; it’s all about the folks around the club. There’s the dedicated nut job fan; the club historian and his domineering mother; the longtime employee who runs the cafe; the shop guy who’s never seen making a sale; the best mate whose new relationship causes a stir; the goalkeeper who shows up occasionally just to drop something; the woman whose attraction to the club historian is as entertaining as it is mystifying.

It won’t give you a history lesson like The English Game, or show you a large and passionate fan base like Take Us Home Leeds United. But it made me laugh out loud several times, might have made me tear up just a little in the last episode, and generally made me really appreciate when a bunch of funny and talented writers and actors dig into the eternal wellspring of human stories that is any and every small football club in the world.

Definitely give it a watch!