Back at the start of the season in 2017, I helped a blog reader named Josh see a Premier League game at Everton FC in Liverpool.

As it happens, though, this wasn’t just any old game. This was the return of Mr. Wayne Rooney, former Evertonian, then Manchester United and England legend, and now back home at Everton. In fact, he scored his first goal back in blue, and Josh was there to see it.

Josh and his wife, Jennifer, went for the People’s Club hospitality package, which includes seats in the end behind a goal, food and drink before the game, halftime coffee and tea, and a match program — excuse me, programme. I have these for every Everton home game through my English soccer travel consulting services.

So how was Josh’s experience at Goodison? Here he is to tell you: 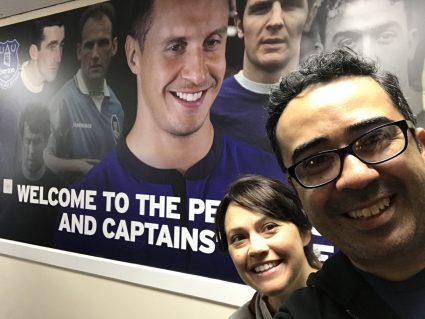 Getting a People’s Club ticket gets you into the Captain’s Bar, as well.

My wife and I arrived about two hours before game time and we parked literally across the street from the entrance (amazing). We were instantly greeted at the entrance of The People’s Club and given the tickets with no hassle. We took an elevator to the dining area and bar, found a table, sat down for a bit and then went to the buffet and picked up our bangers and mash with a pint of Guinness.

The food was actually pretty good and filling. We had the pleasure to share the table with a long time season ticket/ club member who excitedly shared his experiences as an Evertonian, how if he can’t make it to a game then he sends his grandchildren, and he also pointed out all the famous former players in attendance. He also made sure we knew about the half-time tea and biscuits. 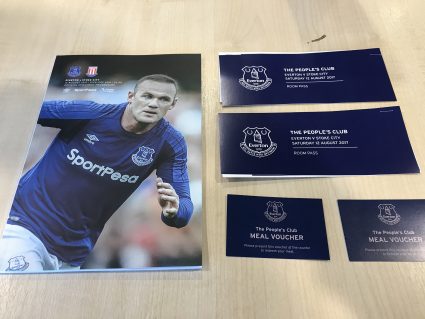 Match program featuring the hometown hero on his return.

As you know, the game was exciting with Wayne Rooney’s first goal back at Everton. The stadium is classic and amazing. I can’t believe I was sitting in a stadium built in the 19th century. So much history. We had the pleasure of sitting in the stadium next to another Evertonian who also shared his childhood experiences with me, and I was shocked to see how much he knew about the MLS and US soccer.

The half-time tea and biscuits were great and the ambiance was first class.

Thank you so much for this opportunity. I look forward to doing this again, and I can’t wait to buy your soccer guidebook for next season! 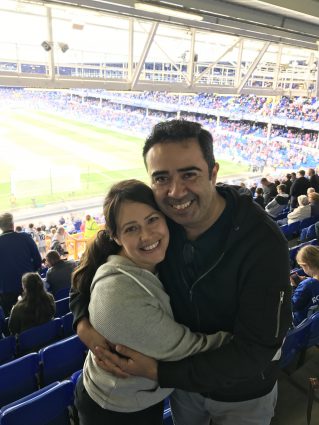 Happy couple in their “People’s Club” seats at Goodison Park.

Hey, thanks for letting me a play a part! I love helping people see soccer games in England and trying to add some perspective and background to their experience.