I love helping people out with Premier League tickets and hospitality packages. In the latest “Reader Report” from soccer adventures I’ve helped out with, April and her boyfriend Garrett saw Manchester City play Arsenal at The Etihad in Manchester. 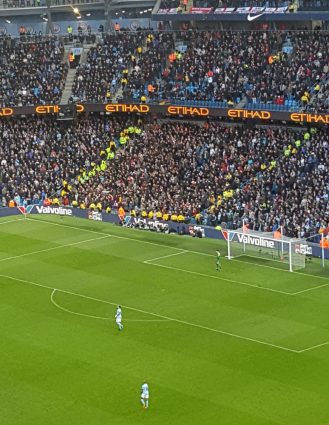 In their case, the package they chose was just a couple of seats in the upper section on the side, at $150 each. (Manchester City tickets are a little cheaper than Manchester United tickets, by the way. I recently quoted somebody $225 to sit in the upper corner for Man U v Stoke!)

As you can see, those seats are not bad. For another $80 each, they could have been in the second tier with access to a sports bar before and after.

As I always do as part of my consulting services, I also sent them a pregame info document with travel and food tips, club histories and songs to watch for.

Here is what April had to say about the experience; I have highlighted the places where she locked in on the things I believe people will love about watching soccer in England

The game was a lot of fun! 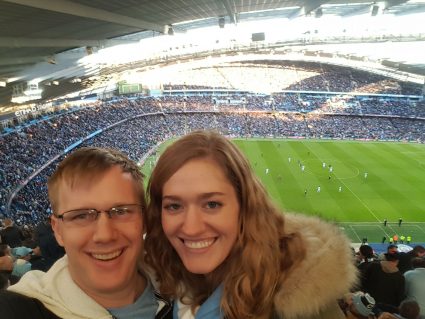 Happy duo at the big game

I know very little about soccer, so I got the run down from my boyfriend in real-time (including to not call it soccer). He kept pointing out little things they did that they made look easy but were actually really difficult. He was thrilled to be seeing the best team in the country!

The atmosphere was something to see as well.  All the fans were so attentive to the game, even up on the top rows.  And, very unlike any football or baseball games I’ve been to in the US, there were hardly any distractions from the game up in the stands.  We especially enjoyed watching the very passionate section of City fans behind the goal and beside the very passionate lone section of Arsenal fans, and the lines of police that would file in and out when things got intense. 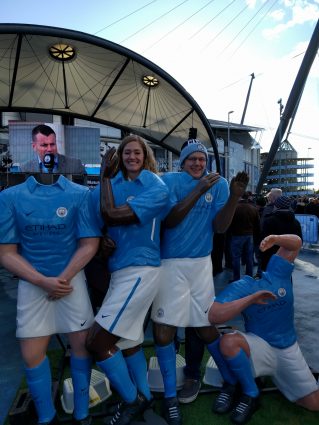 In the Fanzone outside the Etihad

Getting in and out was very easy, especially with your rundown on how to do it. We did as you advised and got there early enough to enjoy the pre-game festivities, people-watching, and some stadium food and drinks. The hotel had the tickets ready for us at check-in, just like you said!

We were just in Manchester for one night, so we took your recommendation and went to (Paul’s favorite Chinatown restaurant) for dinner. We’ll try the Curry Mile next time :). The food was amazing, and definitely worth the short line we waited in for a table!

Thank you again for your help with the tickets and the travel guidance! It really made for a memorable weekend.

You are most welcome, April and Garrett! Always glad to help.

Can I help you see a Premier League game? Get in touch today!