Women’s football in England is a much smaller affair than the men’s game, which gives it a very community-based, family-friendly vibe. The Manchester City Women have all that going for them but also play in the wonderfully modern and convenient Academy Stadium on the Etihad Campus.

Everything about seeing a Man City Women football game screams “investment.” This is not a random League Two or smaller club’s ground, nor is it an hour-plus from the men’s stadium like the Man United Women — who didn’t even exist until 2018 — in their suburban home. The City Women play in Manchester proper, next to a Metrolink stop, and smack between the Etihad Stadium and the club’s training and academy facilities.

On a lesser note which still feels significant, the club’s Twitter feed didn’t create a new hashtag just for the women; it’s all #ManCity, because they clearly see it as all one club. However, I couldn’t help but notice the crowd didn’t sing (and wasn’t invited to do so) the club anthem, “Blue Moon.” 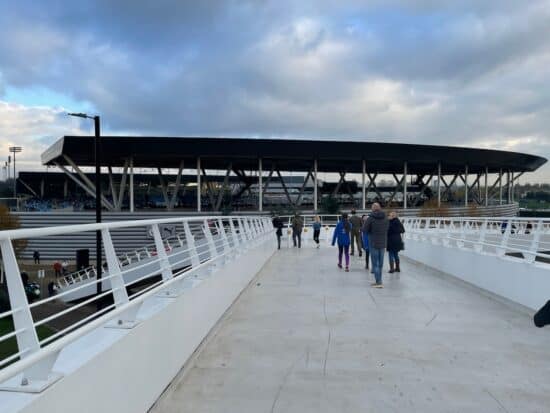 On the skybridge from Etihad Stadium towards Academy Satdium.

Manchester City were one of the first big clubs to start an affiliated women’s team, in 1988 and called the Ladies, but it was then a more typical setup than exists now. They played at Oldham Athletic’s Boundary Park, miles away, and were poorly supported by the then-struggling club. When the men were relegated in 1997, support for the women dropped, and they almost merged with Stockport County Ladies.

But they rebuilt and stabilized with the same oil money benefitting the men’s team, and in 2013 they joined the new Women’s Super League, by invitation and at the expense of the much-more-established Doncaster Rovers Belles — a team with two league trophies and six FA Cups in their case. So Man City Women are a product of the modern, money-driven football like their male counterparts.

In 2015 they broke league attendance records with crowds over 3,000, and in 2016 they started winning trophies. Since then, they’ve collected a league title, three FA Cups, three League Cups (called the Continental Cup), and twice made the semifinals of the Champions League. 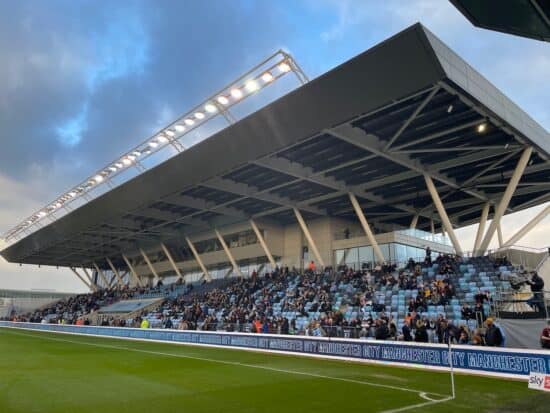 The main East Stand at the Academy Stadium.

It’s hard to think of a nicer, more convenient stadium at any level of English football — men or women — than the one where City’s women play. The Etihad Campus is the sprawling home of the club’s stadium, training facilities, youth academy and a planned 23,000-seat indoor arena.

With 7,000 capacity including standing room for 2,000 behind the goals, it’s a clean and shiny place with excellent views and good facilities. Combine this with the typical women’s soccer crowd — younger, more diverse, much more kid-friendly — and seeing a Man City Women game is frankly a joy. 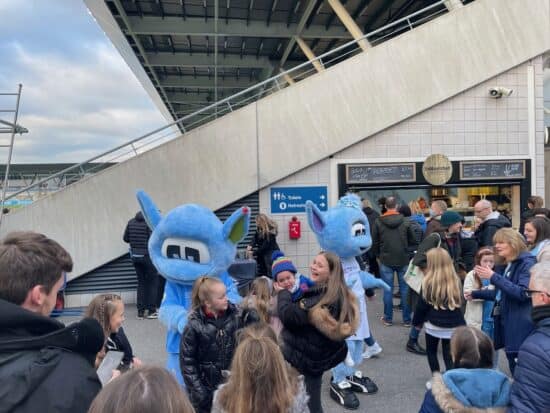 Not sure what they are, but the kids seemed to like them!

Getting to the Academy Stadium is a snap, although there’s one subtlety I learned: While it’s at the Etihad Campus, you would do well not to get off the Metrolink at the stop called “Etihad Campus.” I was on one that terminated there, then I had to walk several minutes past the Eithad Stadium to get there. Not a hassle, but instead go for a tram going farther on the line to Ashton-under-Lyme, and get off at the Velodrome stop. The stadium is right across the street from there.

You should sit in the East Stand, which is the bigger one, although the facilities are nice in both stands. I had reserved seats (£13 and fully mobile) but got the sense I could have sat or stood anywhere I wanted — and I was there for a big league game against defending champs Chelsea. 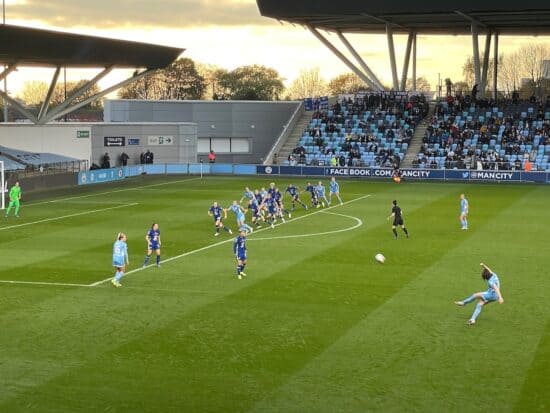 Free kick in front of the traveling Chelsea supporters.

I was there for a 2021 Women’s Super League game against Chelsea, who are currently bossing women’s football in England. The visiting Blues were defending league champions, recent runners-up in the Champions League, and just weeks away from a Covid-delayed FA Cup Final with Arsenal at Wembley.

So when City’s reserve keeper literally gave Chelsea the ball about 20 yards out in the second minute, it felt like a loss was on the cards. While City did well the rest of the first half, another errant pass in the midfield late on led to a second goal. In the second half Chelsea went for the kill, eventually winning 4-0.

Manchester is a really fun city, even beyond the two local men’s clubs you have probably heard of. In fact, it’s an amazing hub of travel for seeing soccer games nearby, and in town is both the National Football Museum and this amazing football shirt shop. We also really enjoy Chinatown and the Curry Mile. The Christmas Markets are quite famous, and there’s some pretty good nature to enjoy nearby as well, from the Peaks District to the Lakes District. 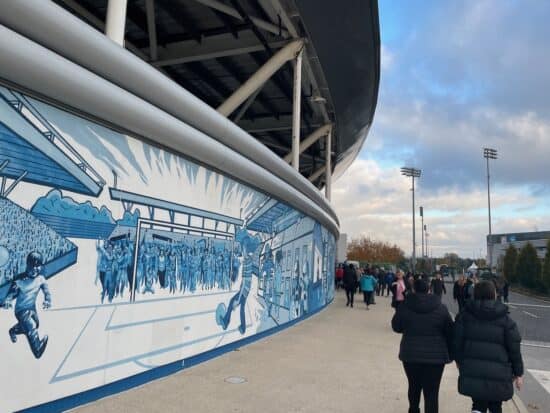 It’s all nice and clean at the Academy Stadium.

Let’s say you’re in Manchester to see United or City play, and it’s a Sunday, and you don’t have any groundhopping on your schedule. Check to see if Man City Women are playing at the Academy Stadium. You can get tickets on the day and enjoy a nice time out, and maybe tack on an Etihad Stadium Tour.

Are you looking to see a Manchester City men’s home game? Groundhopper Guides can help. Fill out this form, and we’ll get back to you shortly.