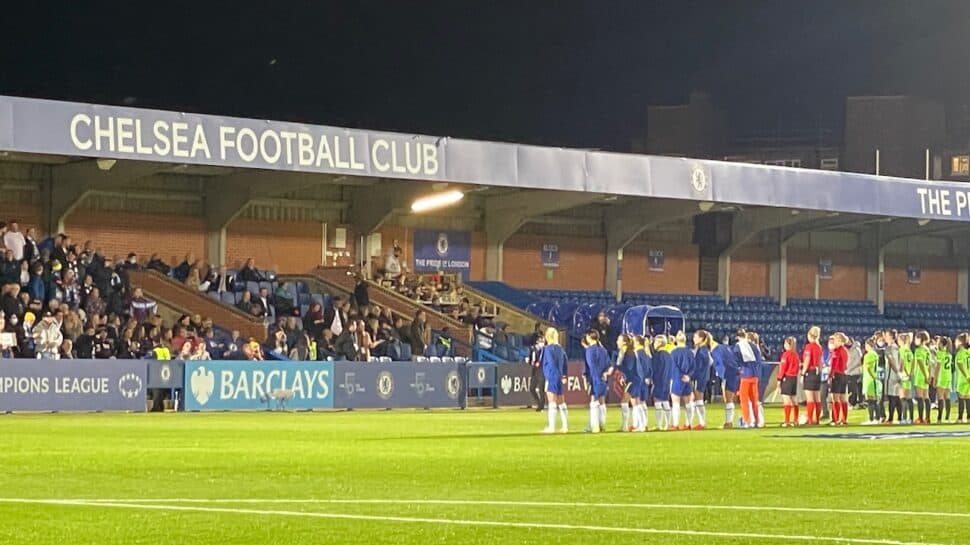 Before a Chelsea FC Women game at Kingsmeadow. They are defending Women’s Super League champions.

Although Chelsea FC Women are the biggest and best women’s soccer team in the English leagues these days, seeing one of their games in person is easy, casual, and old-fashioned in a family-friendly kind of way.

As big as Chelsea FC Women are, they in fact inhabit a smaller and newer world than do their male counterparts. So, while seeing Chelsea FC play at Stamford Bridge is a big, glamorous, and occasionally expensive proposition, seeing the women — two-time defending league and league cup champions, packed with international superstars — is about as hard as seeing a non-league team. And a lot more fun.

Formed by Chelsea supporters as Chelsea Ladies Football Club in 1992, the club voted to be absorbed into Chelsea FC in 2004. They landed in the top tier and, in 2011, were one of the founder members of the Women’s Super League. In fact, they hosted (and lost, 0-1 to Arsenal) the first game in league history.

The modern era of success began with the hiring of manager Emma Hayes in 2012. By 2014 they were second in the league, semifinalists in both cups, and playing in Europe. In 2015, they went fully professional and promptly won their first league title and FA Cup. They have repeated as league champions and League Cup winners in 2019-20 and 2020-21, with a star-studded squad led by Australian Sam Kerr, one of the top players in the world. 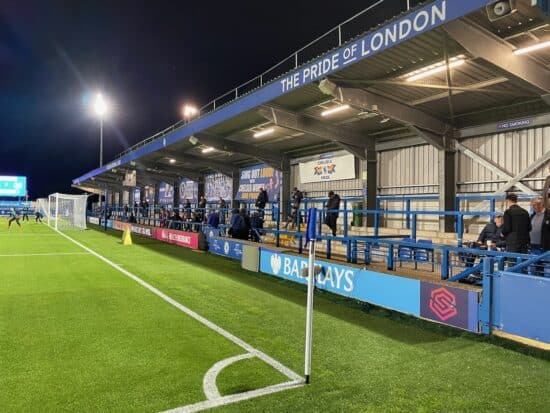 As is the case with many women’s teams in England, Chelsea FC Women don’t play anywhere near where the men play. (An exception to this is Manchester City, who play right next to the men’s Etihad Stadium). The Chelsea Women play at Kingsmeadow, in Kingston-upon-Thames, south west London. It’s also the home of the Chelsea (men’s) under-23 team and was, for years, the home of AFC Wimbledon until they built their new stadium at Plough Lane.

It is very much your standard League Two / non-league ground, with 4,850 capacity, around half of that in standing areas. There is a little club bar on the premises, a couple of food stalls, and all in all has a very comfortable, community kind of vibe about the place. 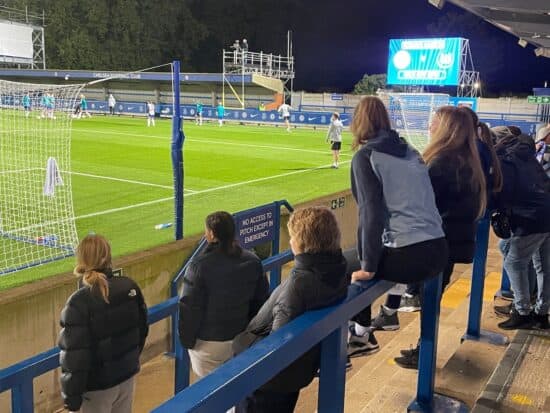 Different kind of crowd at a women’s soccer game.

It’s a 15-minute walk from the nearest train station, Norbiton, which itself is a 25-minute ride out from London Waterloo. I have been there to see Wimbledon and Chelsea Women play, and there’s a lot more going on one stop down the line at Kingston, in terms of restaurants and bars. There’s also a taxi rank at that station which will spare you a 30-minute walk.

Even though I was there for a Women’s Champions League game, Chelsea FC Women tickets were easy to come by. League and FA Cup games are £9 for adults and £1 for juniors on the Chelsea website. You can get them on the day, but you might as well do it ahead of time, especially if it’s a bigger game and you would prefer sitting.

Kingston has some nice walking along the River Thames, across which is the sprawling and beautiful Hampton Court Palace, once a home of King Henry VIII and now a major tourist attraction with the palace, a maze, gardens, and what is said to be the world’s largest grape vine.

Kingston is also only a half-hour by bus from Richmond, home of many Ted Lasso filming locations including his local pub, the Princes Head. 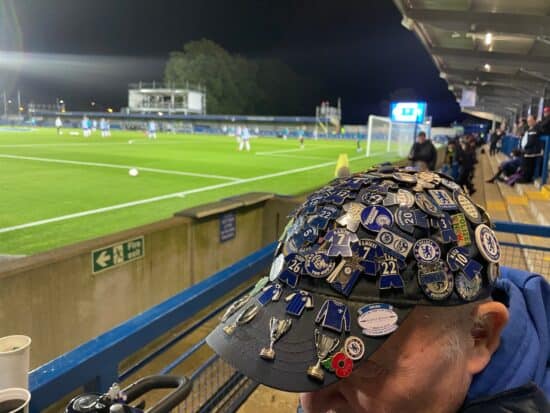 He’s been following the “boys” and “girls” for decades.

I figured if I was going to see my first women’s game in England, I might as well start at the top. When I rolled into Kingsmeadow in October 2021, Chelsea were defending League and League Cup winners, and they had made the Champions League Final the year before. Wolfsburg are a German giant in the women’s game. From 2012 to 2020, they won six league titles, two Champions League titles, lost three more Champions League finals, and won the German Cup eight out of the nine years!

To see this level of quality and glamour in front of about 2,000 people in a tiny little ground, surrounded by a much more friendly feeling than at a men’s game, is a real treat that only women’s soccer in England offers.

And yes, the crowds are quite different, but clearly a small number of male supporters consider themselves Chelsea Football Club supporters, no matter which team is playing. In fact, the first person I spoke to there was a man whose hat drew me in and simply had to be photographed. He said he’d first seen “the boys” back in the 1950s and now comes out to every “girls” game that doesn’t conflict with the fellas.

There was also a small group of mostly men up one stand doing all the usual Chelsea cheers, and another group with a distinctly more female sound on the terraces. And they did the same walkout music as the men, as well. 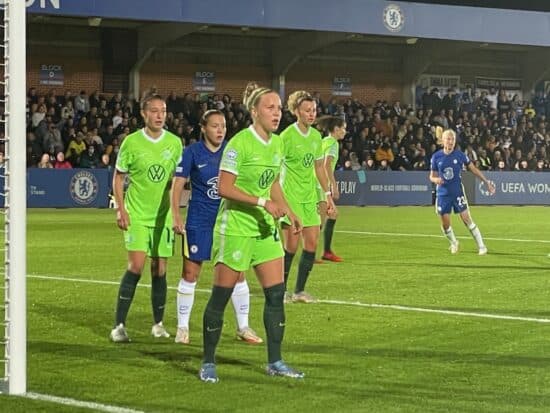 European royalty, up close and personal.

The game itself was a cracker! Kerr opened the scoring with a delightful chip, but two Chelsea goalkeeping errors put them in a 2-1 hole. In the second half, another defensive lapse by Chelsea made to 3-1 to the visitors, but Chelsea got two back, including one right in front of me in injury time, to come out with a point at 3-3. Here are the highlights from the club.

Chelsea FC Women: The Biggest and Best, Up Close

Seeing a Chelsea women’s game is a perfect combination of the “small in a good way” feeling around women’s football plus the world-class talent on display at England’s biggest women’s soccer club. Combine that with a trip to Hampton Court and/or Ted Lasso’s world, and I think it’s a fine day out in Greater London.

Are you looking to see a Chelsea FC home game? Groundhopper Guides can help. Fill out this form, and we’ll get back to you shortly. 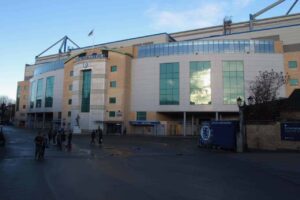 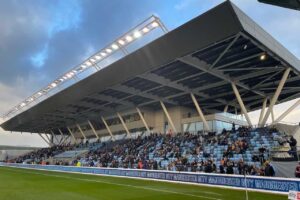 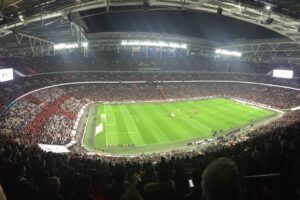 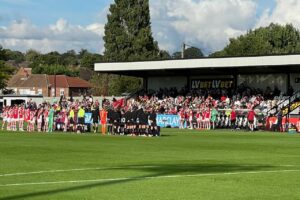