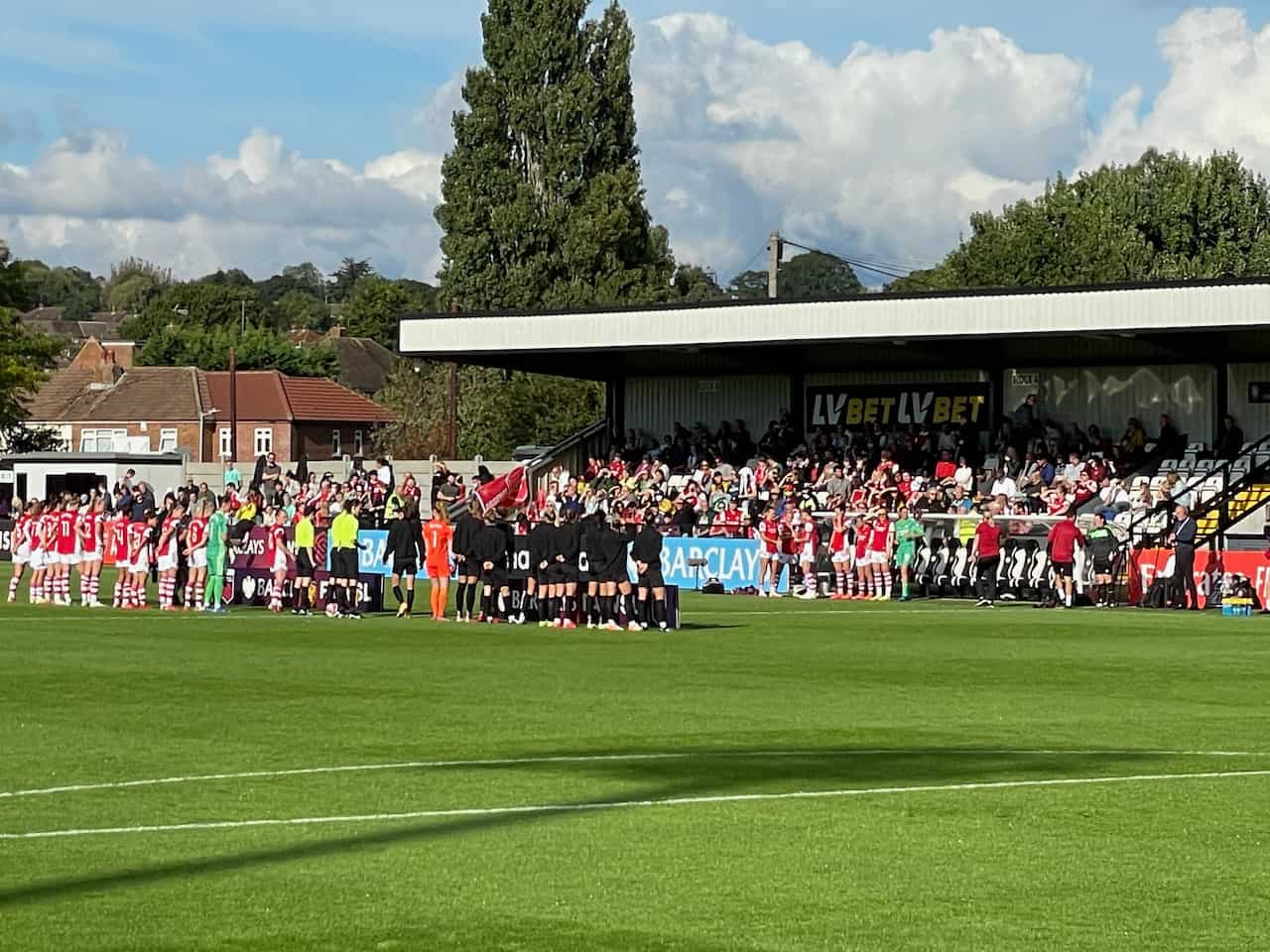 Arsenal Women Football Club are the most successful team in English women’s soccer, and yet seeing them play — as is almost always the case with seeing women’s soccer in person — is an up-close, easy, affordable way to spend a few hours.

Considering the long list of honors won and records set, it’s remarkable the Arsenal Women don’t sell out every game and play in a bigger stadium. But it’s the nature of the beast that is a long history of gender discrimination; remember that the Football Association banned women’s teams from setting foot on their club’s pitches for over 50 years.

So as dominant as Arsenal have been, and as star-studded as their roster is, the fact is you can walk up to the game, set down £10 or so, and go watch them play in a safe, fun environment.

As is often the case with women’s football clubs, Arsenal Women — they were initially called Arsenal Ladies, also common — started within Arsenal Football Club. In fact, it was the men’s team’s kit manager, Vic Akers, who founded the women’s club. It took Akers a few years to get things going, but the club backed him and the “Ladies,” spending money on the academy, players and coaching staff. They took the novel approach that if the women were going to be part of the club, they should be treated as such, and the club would benefit.

This was not the case at almost any other club, and the results on the pitch, under Akers’ leadership for the next 22 years, were stunning: 14 FA Cups, a record. Fifteen titles in the Women’s Super League (which previously had a different name); that’s also a record. Only British team to win the Champions League. 5 League Cups, a record. 10 Women’s Premier League Cups, a record. Unbeaten in the league for 108 games from 2003 to 2009, including a 51-game winning streak. Six unbeaten league seasons. 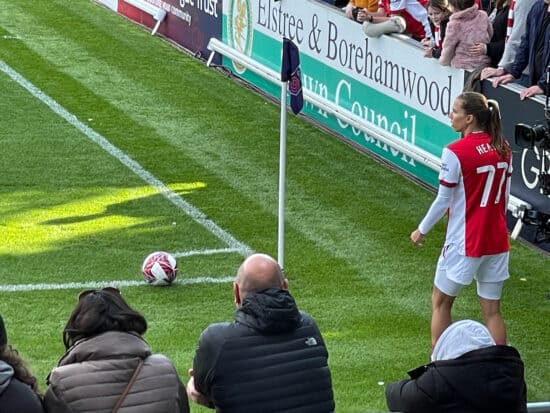 American Tobin Heath is one of many major stars to wear the Arsenal shirt.

Akers retired after a treble win in 2008-09, and the glory slowly faded — as if it could be sustained at that level! Other clubs started trying harder and spending more, and Arsenal’s last trophy was the league in 2018-19. Still, they have finished as low as fourth in the league just twice in all their history. 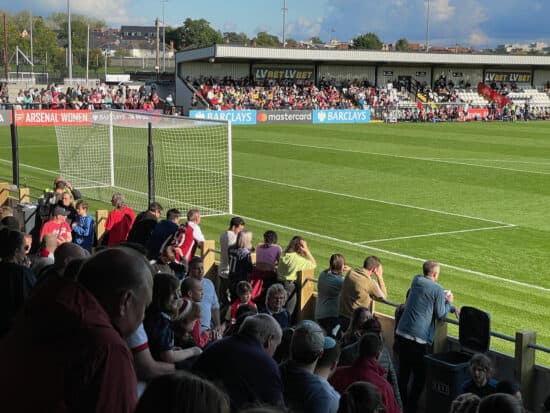 View from The North Bank at an Arsenal Women game.

Arsenal have, since their founding, had a groundshare with Boreham Wood FC, a club in southern Hertfordshire but really in the northern reaches of Greater London. It’s called Meadow Park, and it has seats on two sides, uncovered terracing on one side, and a newly covered terrace on another, which is called the North Bank in honor of the old Arsenal Stadium at Highbury.

To get there from Central London, use the Thameslink train from King’s Cross/St. Pancras, headed to Luton. It’s 45 minutes from there to Elstree and Borehamwood Station. When you come out of the station, take a right down the high street and then, after about 10 minutes, turn left at the biggest McDonald’s you’ll probably ever see. It should be about a 15-minute walk.

Not that it will be overflowing with supporters or anything, but The Wishing Well along the high street is a nice enough little boozer. The Alfred Arms across the street is a better bet for space and food.

There are more food options here than you might expect. There’s a Nando’s, where you can get peri-peri chicken; a Prezzo Italian; a Kiyoto Sushi; and the usual assortment of kebab, burger, and chicken places. 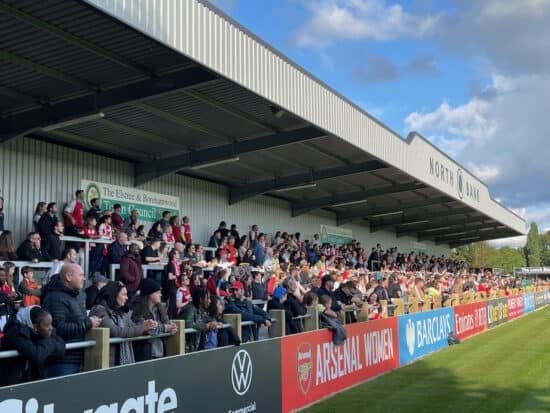 The North Bank during an Arsenal Women game. Sunshine not guaranteed.

Borehamwood — the town is one name, the club two, and nobody seems to know why — is most famous as the home of Elstree Studios, one of the world’s great motion picture studios. Indiana Jones, Star Wars, Clockwork Orange, The Shining, The King’s Speech — all those and many more were filmed here, in part. Sadly, no tours are available, but the entrance is basically just across the road. 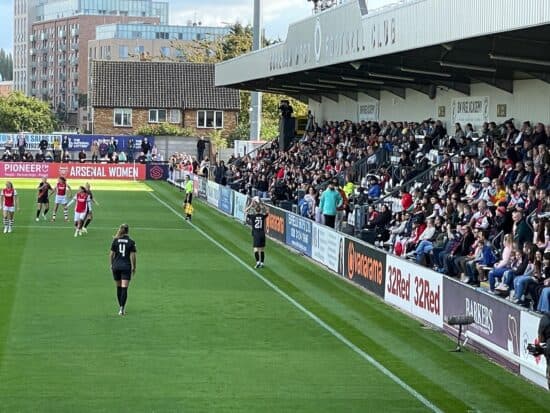 It’s all up close and personal at women’s soccer in England.

The Game: Arsenal Women vs Everton

One of the nice things about seeing women’s soccer in England is that they play on Sunday — presumably to not compete for attendees with the men’s clubs. In my case, I had been to see Sutton United’s men the day before, and it was due to be a sunny day with Everton in town, so I went to see women’s footballing royalty. As it was also a holiday weekend, the place was quite packed.

In so many ways, women’s soccer in England combines the small with the traditional with the family-friendly. So as I saw more and more Arsenal colors walking towards the ground, I couldn’t help but notice it was a lot more families, women, and kids mixed in with what looked like Arsenal club stalwarts enjoying a day off from the men. 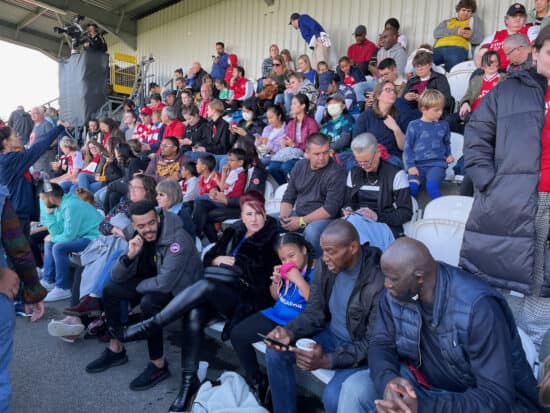 A much more diverse scene than at a men’s game.

I had a standing ticket, so I could be in either end. I decided to go old-school and spend each half having Arsenal attack towards me. This meant the North Bank for the first half and the open terrace for the second. Also traditional: when Arsenal scored first on a lovely volley in front of the North Bank, the crowd broke into the “1-Nil to the Arsenal” song.

But before the game started, both sets of players joined the worldwide No More Silence movement, locking arms around the center circle after sexual abuse allegations had come out that week against an English coach working in the U.S. 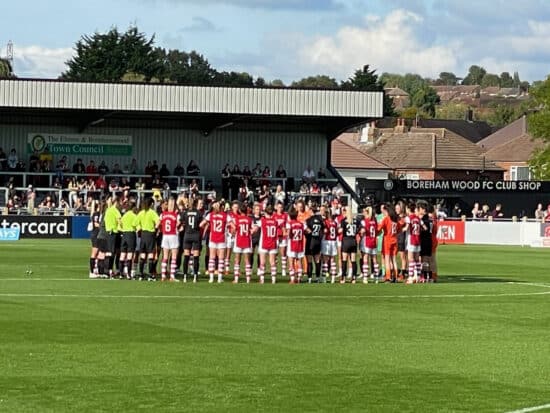 #NoMoreSilence moment before the game.

Arsenal, on a long winning streak to open the season, then went out and dominated an Everton team still working in a lot of new summer signings. Only a couple of good saves from the Everton keeper kept it from being worse than the final 3-0.

I spent my time enjoying space on the terrace, leaning on a rail right against the pitch for the second half, standing in short queues for food and drink, and enjoying the lack of cursing and abuse from the fans — all the hallmarks of seeing women’s soccer in England.

And then I broke one of my longstanding rules: I left the game early to catch a bus. It being Sunday, they weren’t running often, so I checked out with about five minutes to go, not wanting to wait another 45 minutes. And then, on the bus, I saw a tweet from Arsenal Women saying how great that last goal must have looked to the people behind the goal — the goal I had just walked away from minutes before! Oh well. Don’t leave early, kids; you never know what might happen.

Here are the highlights, including the goal that got away :-).

There are many reasons to go and watch Arsenal Women, or any other women’s football team in England: support the cause, support your favorite club, show your kids a part of the world they might not know, or just enjoy a nice game of football without paying a lot of money or putting up with a bunch of nonsense.

And in the case of Arsenal Women and the Women’s Super League, you get to see international stars, a long tradition of excellence, and legitimate footballing roalty.

Are you looking to see an Arsenal home game? Groundhopper Guides can help. Fill out this form, and we’ll get back to you shortly.