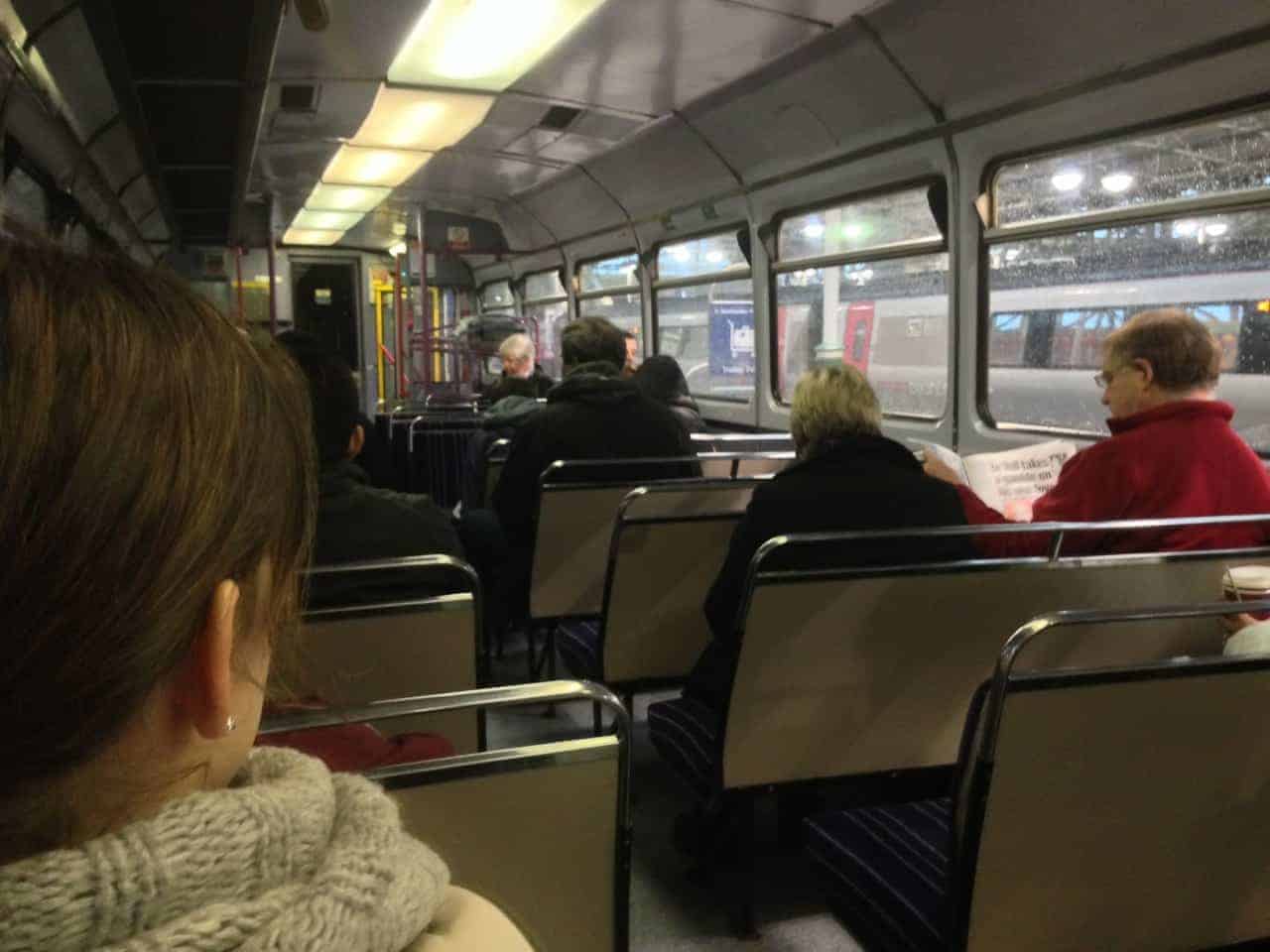 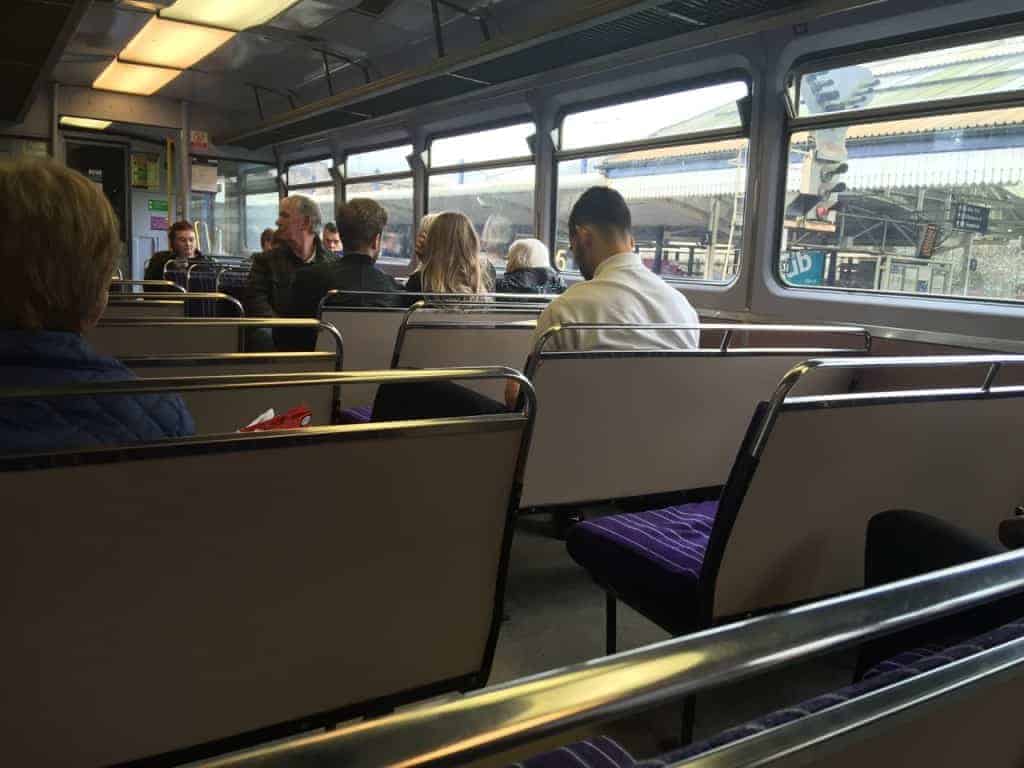 Off we go, again.

In addition to the ladies going shopping, old couples sitting quietly, families sometimes bickering, and pods of teenagers going who knows where, there are always groups of 20- to 40something men, with beers, talking football. It’s one of the things I love about watching English soccer, this kind of old-fashioned, in-person watching, with games happening all over the place, fans mixing before and after on the road, and everybody loving the experience — but, being English, never feeling too good about their team’s chances.

Here is piece I wrote about it for my book, The Groundhopper’s Guide to Soccer in England. 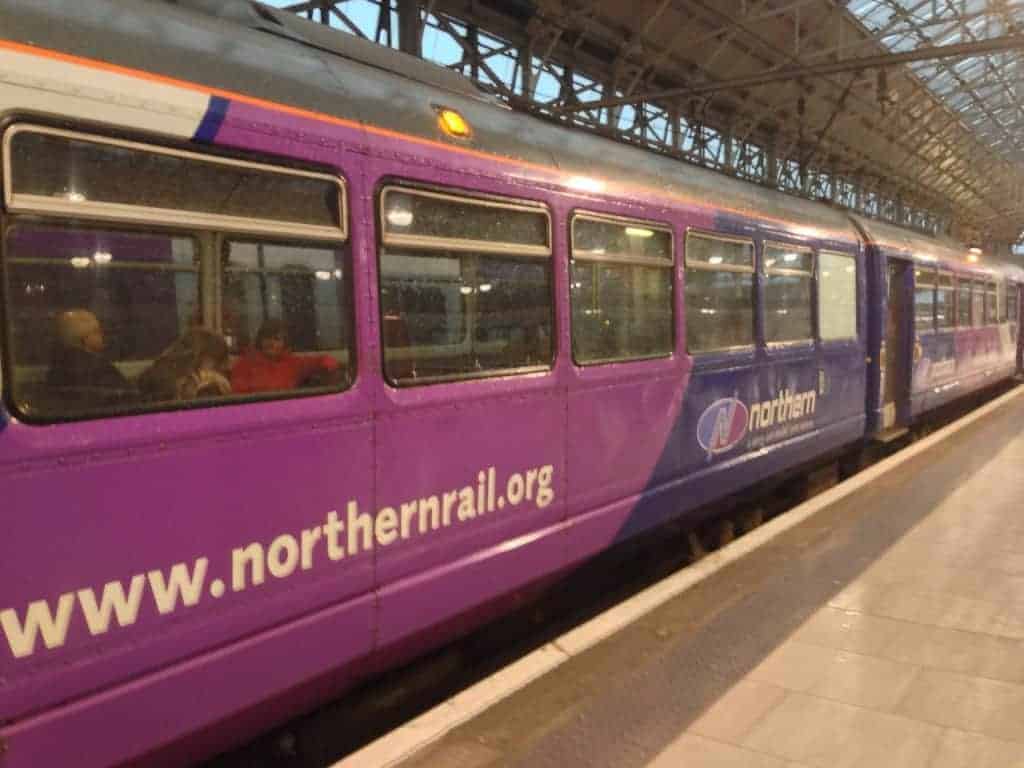 I left Manchester for Sheffield on this one.

With my eternal croissant and flat white, I settle onto the train with the usual five or so minutes to spare. It occurs to me that I should probably get here earlier, and then I remember that I always get here last minute, always say the same thing, and will never change. I relax into my seat and my routine, the CrossCountry service eases out of Birmingham New Street, and another Saturday football outing is underway.

Onboard, it’s the same crowd as every week. Ladies going shopping, old couples sitting quietly, families sometimes bickering, pods of teenagers going who knows where and all staring at their phones, somebody already asleep. And then there are always groups, or maybe just pairs, of 20- to 40something men, with beers, talking football.

Listening to little snippets here and there, I realize that on my train to Sheffield there are at least two other clubs that I can see represented, even though the English fan tends to hide his supporter status in public. We’ve got Birmingham City people headed for Burton, Wolverhampton people headed for Nottingham, and then another crest on a cap … is that Coventry City? I take out my phone and confirm that was a Coventry cap, and the Sky Blues are on their way up to Chesterfield for some League Two action. 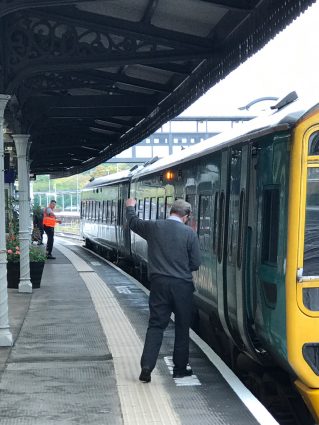 A train through the Midlands on a Saturday morning is an odd sort of river, fed by many streams and then spreading out again into a delta of football grounds. You lose some flow in Burton but pick up a dad and son headed to Derby to see the Rams take on somebody. In Derby, you lose the Nottingham bound, and on the platform you realize they include some Forest fans who must live down south somewhere. For now they’re nodding at the Wolves folk, but in about two hours they will all be calling each other wankers for the afternoon.

Onboard, you hear all the soothing sounds of football. “Fancy our chances today?” “How do you reckon Mourinho will do at United?” “That new Spanish midfielder is starting today.” “What was he thinking, playing them kids in that game?” “You see that goal by that Bristol City lad?”

It feels festive and communal, and it reminds me of driving to college football games with my dad when I was a kid in the South. I would size up every car on the highway for flags, pompons or hats in the back window. Maybe they’re Tennessee fans headed to Ole Miss, or Memphis fans going to Starkville to see them play Mississippi State, or maybe they’re a long-haul Florida Gators family that lives in Memphis or further north.

It’s one of the things I love about watching English soccer, this kind of old-fashioned, in-person watching, with games happening all over the place, fans mixing before and after on the road, and everybody loving the experience — but, being English, never feeling too good about their team’s chances.

Walking from the train station to the Amex, home of Brighton and Hove Albion FC.

It all feels so involved and connected. It’s 92 professional clubs in a country about seven hours long by train. We’re not at home watching on TV, but we’ll keep an eye on our phones for the “scores from around the country.” Everybody is pulling for their club but also keeping an eye on somebody else who might help out by beating a rival or somebody else chasing the playoff positions. On the way back to Sheffield after my game we would pick up the Birmingham City stragglers, fresh off a frustrating loss to Burton but enjoying somebody’s 2-0 first half lead over Aston Villa in the 5 o’clock kickoff.

On the train, it’s civilized and old fashioned, even though we all know at the ground it will obscenity and carnage. You can practically see the kids studying the adults for how to talk about the game, how to act. Here it’s calm analysis; at 3 it shifts to singing and cursing. The younger guys are respectful and mostly calm now, but if they are getting a little rowdy you’ll see some of the older guys looking over that way wistfully, remembering something lost, even as the non-footballers on the train will mumble to themselves, ruffle their paper with a flourish and maybe even share an eye roll and a shake of the head. I always smile at that one; every society needs somebody mildly offensive, and England has football fans.

For us, Saturday means our tribe gathers and mixes and then disperses again, every week, all over the country. Our path of the day is cautious optimism or crouched fear regarding our club, and honest good wishes regarding the others – unless it’s a rival, of course – then despair or joy followed by resignation or relief.

We might see magic. We might see crap. We might be thinking promotion at the end of the day, or about our next manager. But whatever happens we’ll be back on the train, having another beer, talking about this goal or that decision, comparing notes with the other clubs’ folks as we roll back down to Birmingham, or wherever we came from.

Next week we’ll probably play at home, but somebody else will be out on the road, doing the same thing. We all wander around the country hoping for three points, good times, a proper sing-song and maybe a bit of footballing magic.