Soccer Culture: The US vs England

I have been fortunate enough to have two fantastic experiences in my soccer life: One is going to more than 100 football games in England, and the other is seeing my beloved Portland Timbers play in two MLS Cups (and win one of them) in person.

The playoff runs were magical and gave me some experience of away games in Major League Soccer. The former is ongoing because I wrote and published a book, The Groundhopper Guide to Soccer in England (buy it now!) and I run a consulting and ticket service.

The whole point of my book is to help non-English folks have the amazing experience of attending games in England – or at least to know more about what they are watching on television — and perhaps be entertained along the way.

My contemplations on why I think it’s so great to watch the English game in person led me to compare the experiences of being a fan in each country. So, let’s have a go, as they say in the UK.

England vs US: Stadium Locations 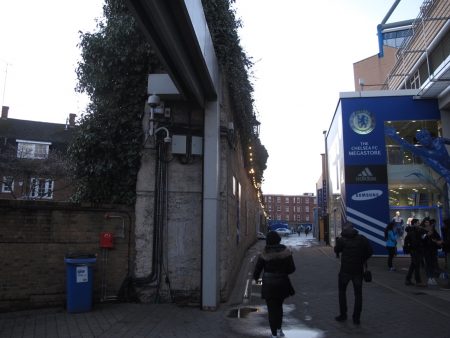 In England: apartments on the left, 45,000-seat stadium on the right.

In the US, many stadiums are on the edge of town and/or were originally built for American football. There are exceptions, of course, and with more “soccer-specific” stadiums coming up all the time, things are improving here.

In England, most stadiums are smack in the middle of town. Take Chelsea, for example: they are one of the great clubs in the world, with a cabinet full of league trophies, domestic cups, and European cups. But their stadium, the sparkling 42,000-seat palace of Stamford Bridge, is literally surrounded by housing and about a two-minute walk from a Tube station in the middle of a busy neighborhood in West London. The same is true for Liverpool, Everton, Newcastle, and many others.

Some of the newer grounds are rather stale and on the edge of town (Stoke and West Ham, for example), but I give the advantage here to England.

US vs England: Stadium Size

The average purpose-built MLS stadium is around 20,000. Since I prefer smaller places, I’ll give a slight edge to the States here. 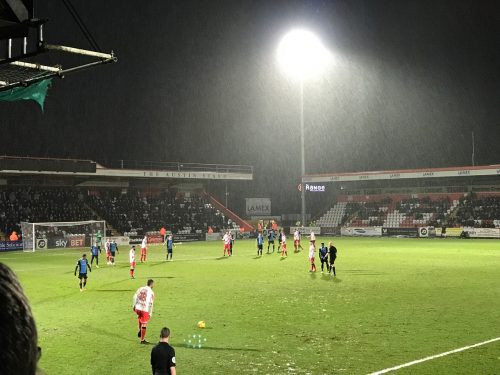 The close-up view from my seat during a game at Stevenage FC.

The vast majority of seats in English stadiums are covered – as they need to be, since the season runs from August to May and at least half of that is rainy with temps in the 30s and 40s. In the US, we have the sense to play in summer and sit in the sun. Actually, it’s because the game doesn’t compete with cricket. Still: Advantage MLS.

My Timbers have the league’s most heated rivalry with Seattle, which is “only” 170 miles away. For comparison, Liverpool and Everton are one mile from each other. Queens Park Rangers and Fulham, two bitter West London rivals, are three miles apart. You could walk to those two and Chelsea in a total of six miles. It goes on and on. Big advantage England.

US vs UK Football Culture: Away Fans

By rule, but not always in practice, away fans are supposed to get 10% of tickets to an English match, and up to three times that for a Cup tie. This means that throughout the Premier League, and in many lower league games, there are literally thousands of away fans singing their guts out the whole game.

The biggest I saw was 9,000 Sunderland fans at Manchester United. Look what they did when they scored a late goal in that game:

At the vast majority of MLS games, an away goal is met with a weird, eerie silence. Advantage England.

UK vs US: Distraction Action 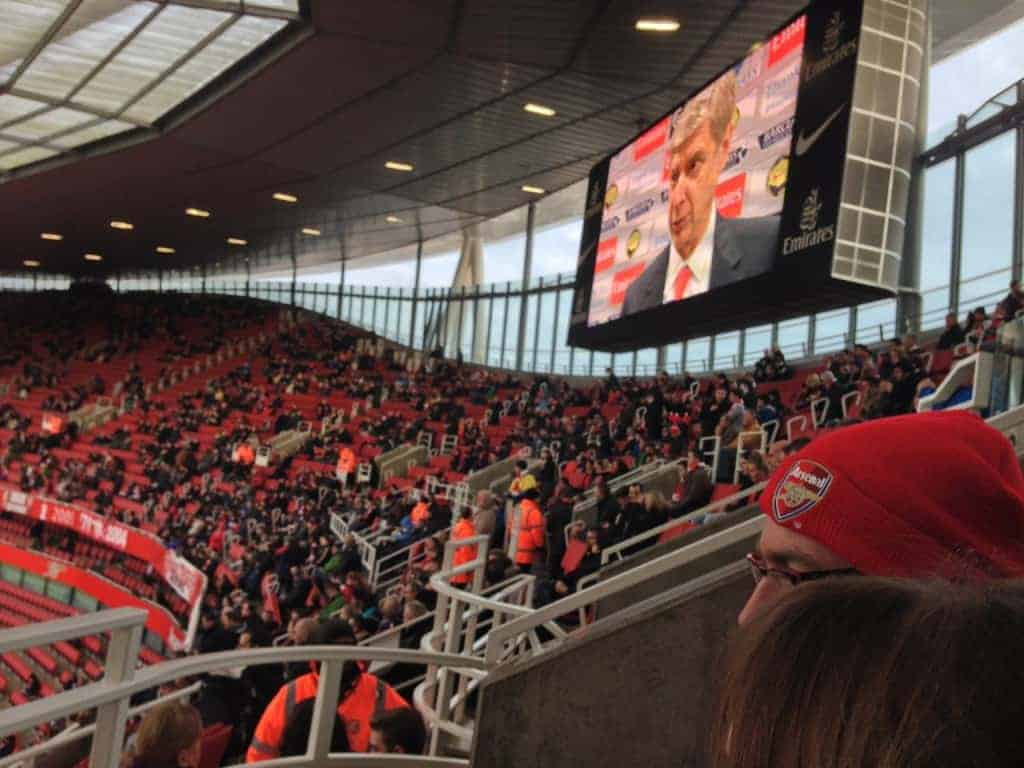 Before games in England you get a lot of announcements and ads on the big screen – if the stadium has one, and most do. And there’s often an on-field announcer whom everyone ignores. During the game? Nothing. They won’t even show a replay if it might piss anybody off.

I know of just one club, Crystal Palace, that has a dance team. I know of more than that with no scoreboard!

In the US, you get some sponsorship messages here and there, but it’s much better than the nonsense at an NBA or NFL game. English people love that stuff, by the way; they think it’s like going to a circus. Me, I give an edge to the UK here. Leave me alone and let me watch the game!

Near as I can tell, MLS culture is pretty much an adoption of English culture, all the way to the point of people wearing scarves to a game in 90-degree weather. There’s plenty of singing in both places, but from what I have seen, MLS severely lacks two things: spontaneity and player-specific songs. There are also very few opening game anthems in the US, which we need to work on.

US vs England Football Culture: Eating and Drinking 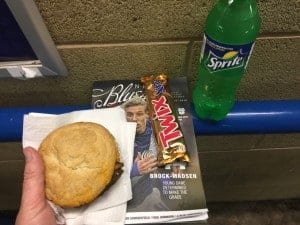 Yay, eating at a game in England!

My favorite thing to tell English people is that not only can we drink alcohol inside American stadiums, there are people literally walking around to sell you beer! They absolutely cannot believe this. Ever since about 1990, when they started cracking down on hooligan culture, it is against English law to consume alcohol while you can see a soccer pitch – even in a suite. I’m serious!

They also have no concept of what tailgating is, but they think it sounds utterly amazing and can’t wait to get over here and try it out.

Food at English games? Sorry, but it’s almost all crap, and at the bigger Premier League clubs there’s just no excuse for it. 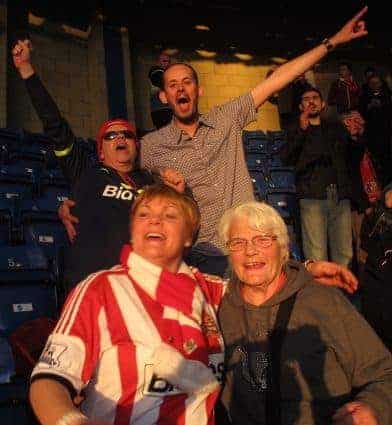 A rowdy but hardly murderous lot.

The biggest misconception about English fans is that they are all hooligans. In fact, in all the games I have been to, I have felt uncomfortable exactly twice: When I wore my Fulham colors outside Sheffield’s Bramall Lane after a tense draw (lesson learned), and the time I naively wore a red jacket to a game at Everton (bigger lesson learned).

Still, I give the advantage to the Yanks here. The level of obscenity and abuse (at their own team, most of the time) is really over the top at English grounds – one reason that almost all have a family-friendly area. In the US, except for maybe a few of the derbies, fans mix together well, and everybody really seems out to have a good time.

One big disadvantage to MLS, though: I cannot believe how many American fans talk during the game and get up to walk around. Neither of these happen during the game in England, except when people beat the rush to concessions before halftime. It is all about watching, and knowing, the game.

Football Culture in England vs the US: The Bottom Line

Taken as a whole, seeing soccer in England reminds me of going to college football games in the South when I was a kid: It was mostly local teams with lots of fans there, TV and in-game distractions didn’t get in the way, and the stadiums felt cozy and intense. They are in the slow process of replacing their old grounds and losing some of that atmosphere, but for now, and for my money, there’s no better sporting experience in the world than heading down to the ground for a Saturday afternoon kickoff, with scarves and songs flying.

I hope to run into you there sometime.

This post was originally written for The Soccer Nomad, a blog run by Austin Long. Austin is a great follow on Twitter, except he insists on talking about the 2018 MLS Cup, which his Atlanta United won over my Portland Timbers. He did a post for me on his MLS fan experiences.