Video: Going “Beyond the Big Six” in the North of England

In my third and final “Beyond the Big Six” video, I take a look at about a dozen clubs in the north of England that I think are fun to hit for games.

Almost all of these are within an hour by train from Manchester or Liverpool which, in turn, are barely an hour away from each other. 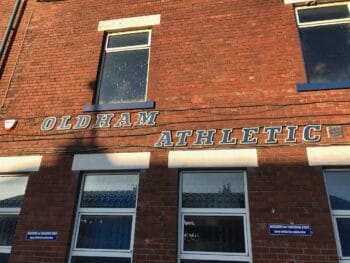 The old stand at Oldham Athletic.

Watching soccer in England, or any other country, is a gateway into the local culture. It’s a chance to be a “temporary local,” as the American travel writer Rick Steves says it. And what better way to do that than to go beyond the most popular clubs with their vast international fan bases and see a game where your simple presence is newsworthy and interesting?

It’s a core part of what we do at Groundhopper Soccer Guides, and it’s why I write a book to go along with the consulting, ticket sales, tours and guide services that I offer. I want you to learn as much as you can about the place and club you’ll be visiting, to foster better connections with the people you’ll be sitting next to, in the pub and in the ground.

And I want to get you beyond the giant clubs of Liverpool, Man City, Man U, Tottenham, Arsenal and Chelsea.

Here, then, is the final video in the series, in which we explore the north of England. Part 1 was about Greater London and Part 2 was about some more southern destinations a little outside of London.

Here’s my list of soccer-related books, films and programs.