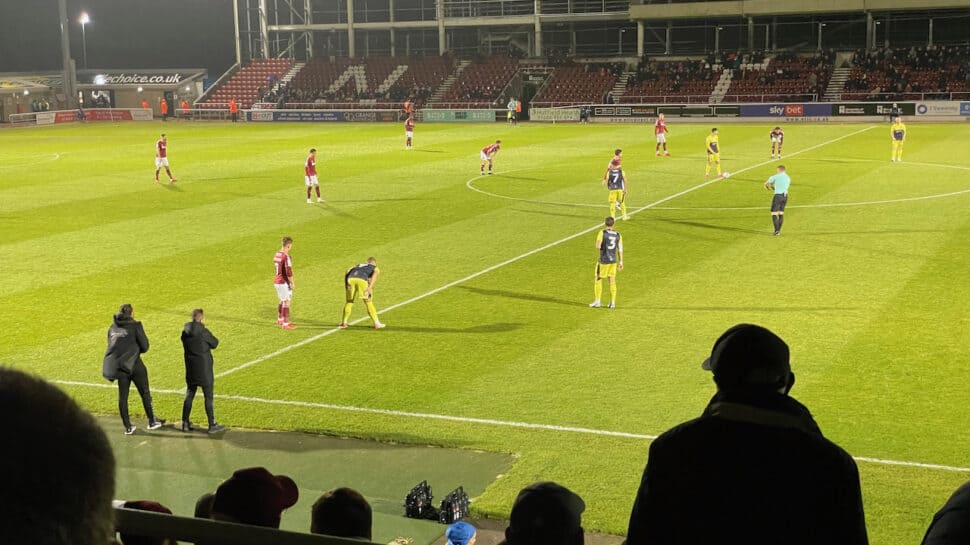 Northampton Town has been in the third or fourth tier of the English Football League since 1967, so seeing a game at their Sixfields Stadium is truly a trip into a non-glamorous world.

In fact, in my experience going to games in England, the thing most fans seem to associate with Northampton Town is that one stand in their ground has stood basically unfinished since 2016; more on that in a bit. Also, with a keen set of eyes, one could sit on a grassy hill and watch a fair amount of the game for free.

Meanwhile, with the almost complete lack of success, barring the occasional escape from League Two, the folks at Northampton Town are a real community of local people who simply care about their club, the game, and a day out — giving the place at least a friendly vibe, if not a grand one. 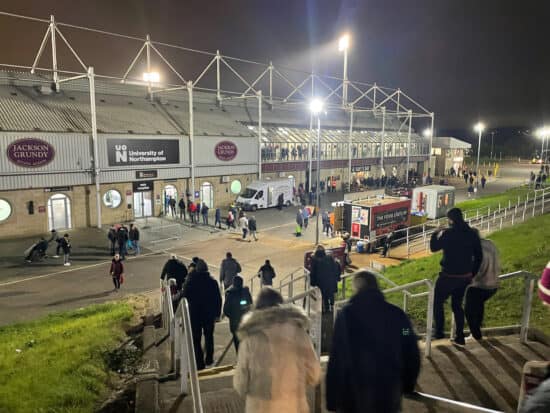 Northampton have played at Sixfields since 1994.

They were founded in 1897 and took the nickname Cobblers after the town’s history of shoe-making.

They joined the Football League in 1921 — in the Third Division, naturally. They stayed right there for 38 seasons, when after a brief drop into the Fourth Division (now called League Two), they shot up through the leagues starting with the 1960-61 season.

Manager Dave Bowen took them from the Fourth to the First Division in just five years; they spent 1965-66 at the top, finished second to last, and five years later were back in the Fourth Division. No club has since gone so high and then so low so quickly. Bowen’s name now graces a stand at the ground.

And that was that, on the pitch, anyway; they’ve been in the third or fourth tier since 1967! 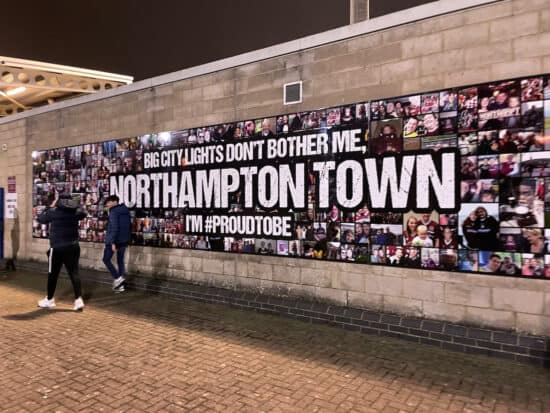 Supporters appreciation banner outside the ground.

Their traditional rivals are Peterborough, from just up the road, and a more recent rivalry has developed with even more nearby — but much newer and virtually without character — MK Dons. I’m surprised anyone gets too bothered about MK Dons.

There have been a few things of note, however, in Northampton Town history:

It’s over two miles from the town center to Sixfields, so I actually took a taxi out there and a bus back, taxis being always hard to find after a game. I think the taxi was £5.

On the way back I had funny interaction with the bus driver. In the U.S. where I am from, we don’t make official designations between town and city (or market town or whatever they have in Britain). So when I told the driver I needed a ticket to the city center, he shot back, “It’s a town center, mate!” Then he said something else I couldn’t make out, but it ended with a snort. I just waved my phone at the charge pad until he handed me a ticket. 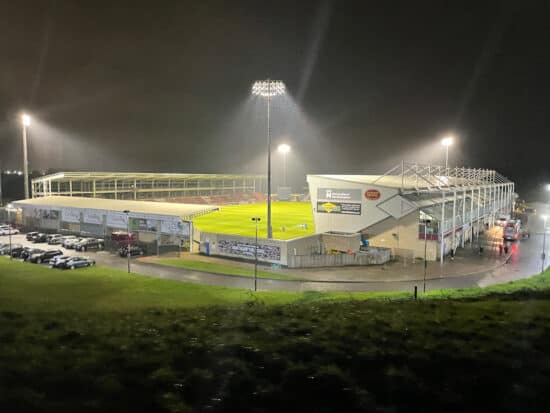 Sixfields makes an impressive sight from the road.

Sixfields is a part of town that started as landfill; the character has improved a little. There’s a TGI Friday’s and a cinema across the street, and the stadium itself is set down in a low area — hence the well-known grassy field behind one stand — and makes for a fairly impressive sight when first seen from the road.

It holds just under 8,000 people in four all-seater stands, one of which — the East Stand — never got finished. This appears to be because about £10 million that was loaned to the club simply vanished — into the pockets of the soon-to-be-former owners, it seems. So the stand construction was halted, with basically just a roof, some seats, and what I’m told are some very inferior facilities underneath. When I was there, they made the visiting Stevenage supporters sit in that stand.

Perhaps the most interesting thing about the place is a van called Cobblers Collectibles that parks outside for every home game, selling old souvenirs and programs which I have no doubt inspire many fond memories among supporters from up and down the land. 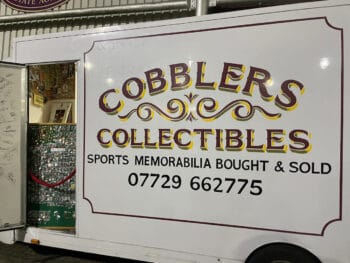 Cobblers Collectibles is apparently a mainstay at Northampton Town. 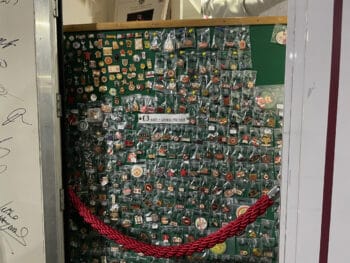 Now that is a badge collection! 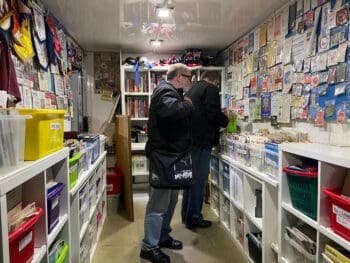 Inside the Collectibles van.

My Game: Northampton Town vs Stevenage

I had looked at this fixture and thought, hang on, Stevenage is only 45 miles away, maybe this one will have some atmosphere. As I walked down the steps to the ground on a Tuesday night, though, holding my hood against the blowing rain, I knew this would not be the case.

But I did enjoy the game, helped along by the home team winning, 3-0. I got the impression just about everybody in the crowd of some 4,000 knew each other, and in fact right in front of me was a guy who sat on the end of a row just above an entrance, greeting and sharing banter with the steward and a dozen or more people who happened by. 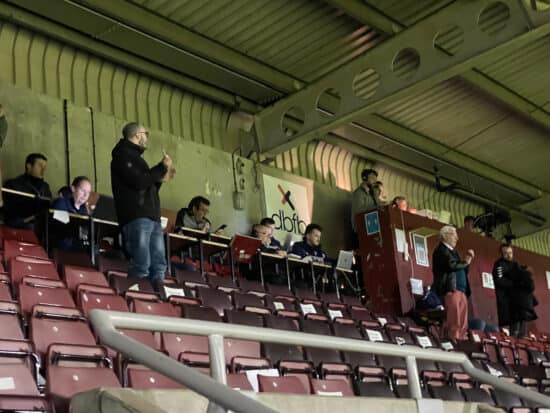 Northampton is the kind of place where the media just take up the last row in the stand, a group of schoolkids can be heard chanting from the opposite stand, and at some point during the game, someone will kick the ball completely out of the ground. Oh, and there’s a dragon that walks around. I asked my very friendly neighbor about this, and after a shrug and he chuckle, he stated the obvious: “I suppose it’s more menacing than a cobbler.”

The intro music was of note, however; they use the same song as Chelsea when the teams walk out. It’s called “Liquidator,” and it seems pretty certain Chelsea started using it first, back in 1969. How it made its way to Northamptonshire is anyone’s guess. Instead of Chelsea, here are the locals shouting “Cobblers.” The video also shows the dragon and the unfinished East Stand pretty well; those are the Stevenage lot over there.

All I remember about the game was the fun I had talking to my neighbor, the fact the Stevenage keeper had a night to forget, and a wonderful moment late on which I wish I had captured in a video.

The home fans to my right were having enough fun that they sang across the pitch at the away fans, “You’re shit, and you know you are.” I knew what was coming, and I was sick I didn’t have my phone ready: Across the way, through the lashing rain, in an unfinished stand on a Tuesday night in Northampton, a desultory response arose: “We’re shit, and we know we are!”

Here are the official highlights; Stevenage fans (and keeper) look away.

While I was at the game, a friend who has “done the 92” texted me to ask how I enjoyed the “utterly bland Northampton.” And I must say, he had something of a point. It’s the kind of place where a TripAdvisor search of “things to see and do” in town turns up a museum, a shopping center, a working farm, a historic home, a park or two, and somewhere down the list the football ground.

Somehow, being the home of an eternally third- or fourth-tier football clubs seems about right for Northampton. 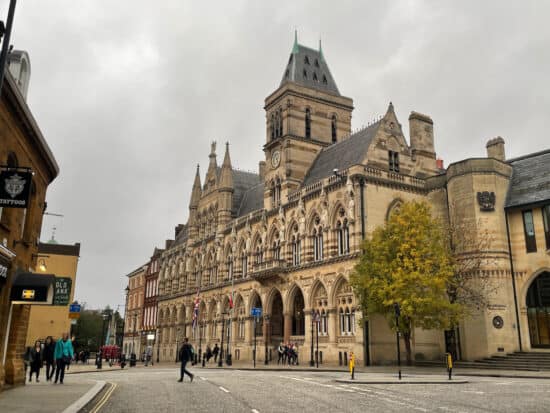 There is a nice downtown area, though, with more than enough food and drink options for before a game — which is as much I can imagine anyone reading this would ever do!

All in all, I found Northampton Town to be well worth a stop on a groundhopping tour. At just under an hour from London Euston Station, it’s a fun, friendly and easy place to catch a game if you want to see some real, traditional football. Come in especially if they are playing Peterborough or a bigger club in a Cup, as that would be your best bet for atmosphere. Hop off the train, check out the downtown, grab a taxi to the game, peruse the collectibles van, say hello to your neighbors, and support the cobblers for a day! 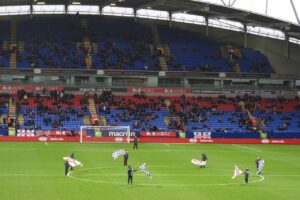